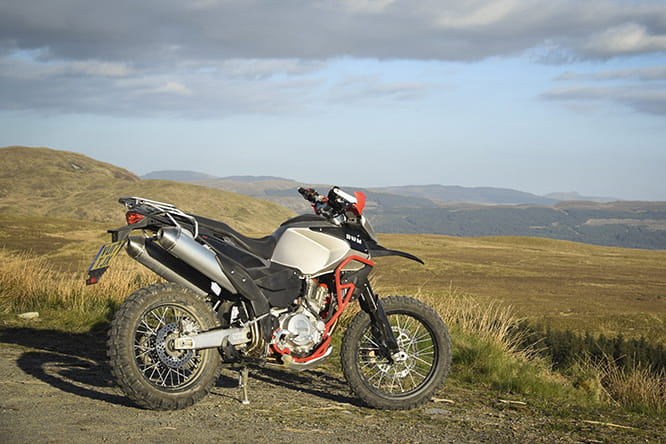 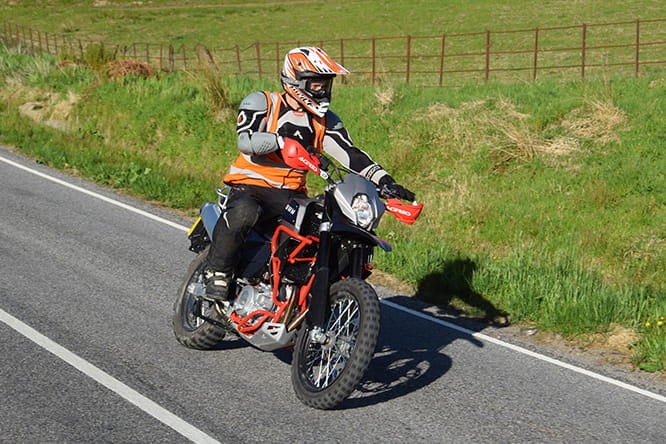 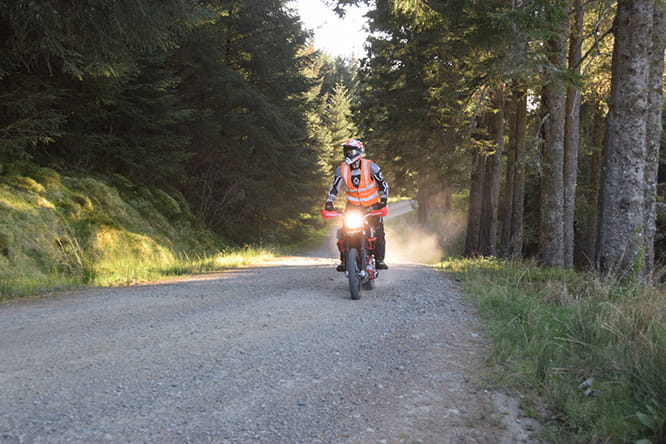 It might not look like it, but in the world of travel, trail and adventure bikes, the SWM 650 SuperDual is probably one of the most hotly anticipated bikes of the last few years. The main reason is the demise of the single cylinder thumpers; Yamaha’s Tenere 660 has gone – only the KTM 690 Enduro R and Husqvarna 701 remain. While a large capacity single isn’t everyone’s cup of tea, in terms of simplicity, weight and character there are few engine configurations to touch them.

This soon-to-be Euro 4 compliant SWM is the last of a dying breed, and while the first batch of bikes are Euro 3, updated machines that follow in September will likely cost an extra £500.

For those unfamiliar, SWM was an Italian manufacturer founded in the 1970s, competing in trials and motocross, much like the UK’s equivalent; CCM. The company folded in 1984, and not a lot was seen of it until two years ago, when Chinese money from the Shineray Group funded a rebirth. All bikes are built at the factory in Verese, by the same engineers who previously laboured on BMW, KTM and Husqvarna. These off-road devised machines are effectively re-imaginings of the old Husqvarna TE range, prior to BMW ownership in 2007, now with Euro 4-compliant engines. So a proven track record they certainly have.

I’ve previously ridden the 300, 500 and 650 bikes, which were all surprisingly good. Excellent value for money, well-built, and for casual to intermediate enduro and trail riders, equipped with more than enough performance and ability. This Super Dual has been touted as a more ‘adventure’ friendly version of the RS 650 R; creating a bike that can do dirt and Tarmac, and provide an ideal platform for going around the world, should you want to.

The changes from Enduro to SuperDual aren’t drastic, but certainly significant. The seat has been switched from a bench seat to a sculpted, more distance-friendly saddle; the front wheel is now a more road friendly 19-inch rather than 21, and rear wheel is 17-inch, down from 18. There are new frame guards, sump guard, and as standard the bike – costing £7599 – comes with a set of Givi panniers, screen, fog lights and handy luggage rack on the rear. The tank also swells from 12 to 18 litres and is now metal rather than plastic. Dry weight has increased from 144 to 186 kilos, but with screen, fog lights and panniers removed from this off-road school’s bike, the difference in weight feels negligible.

Not huge changes then, but the minute you set off you realise that the most important tweaks are more than skin deep. The fuelling is different for a start. The bike is soft on the throttle, smooth, and without that abruptness you get with the delivery on the Enduro model; all being well, that’ll hold with the Euro 4 versions. 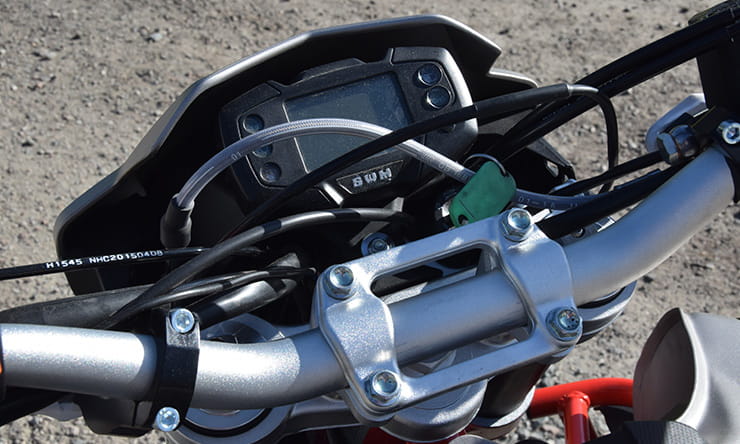 Heading out of Inveraray along a twisting bumpy A-road, it’s immediately apparent that the suspension (Fast Ace front, Sachs rear) has also been retuned, with the rear now adjustable for preload, compression and rebound, and the front for rebound. It’s more supple, and softer as it floats over the bumps, but still nicely controlled and sharp enough to push on.

The 600cc liquid-cooled 56bhp engine feels sweet. Power is clean and linear. It’s quick, and for a big single incredibly smooth. I’d say it’s up there with the smoothness of BMW’s old F650 Rotax engine, but much more powerful and responsive. The gearing is also clearly different to the Enduro, and tuned more for road work. Sixth gear is nicely broad, meaning you can carve through the corners in top, before winding it out all the way up to a readily accessible 90mph, again where vibrations are minimal. It feels like a bike you could do big distance on without too much fatigue. The sweet six-speed gearbox is also well suited to distances, as is the 1.8-litre oil capacity. Service intervals are every 5000 kilometres.

Tyres on this test bike were knobbly Mitas EO-9 that Clive Rumbold, owner of www.motoscotland.com, had fitted for use at the training school. The bike comes as standard with Metzeler Tourance, and while the Mitas aren’t top choice for road work, on a bike as light as this you can still push hard, especially with high and relatively wide bars giving you lots of leverage. Again, this is where a big, light single comes into its own – these things are so much fun on the tight back roads. Sharp through the corners, loads of grunt out of them, strong brakes and a massive smile when you get to the end of the road and look back. A set of bar risers might be on some owners’ wish list. 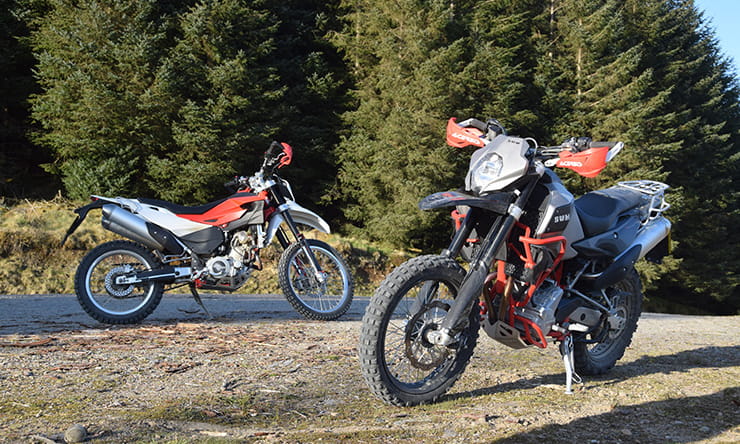 Switching to the regular RS 650 R Enduro that Clive had been riding, it’s evident that the front wheel size does make a noticeable difference. The 21-inch of the Enduro feels that little bit more stable at speeds, yet is still perfectly sharp at turn in. In a way, it’s an odd decision for SWM to lead with a smaller wheel variant, but if you’re not riding them back to back you’ll soon gel with the smaller wheel set-up and not give it much thought after a while. For those who do plan on doing a lot of off-road work, where a bigger front wheel gives better ride quality and tyre choice, SWM does plan on selling a bigger wheel SuperDual variant later in the year, and would be my choice of the two.

Back on the SuperDual, and riding alongside Clive, we take both bikes down a long forest trail, at times offering incredible views over the mountains and lochs. Again, the SuperDual shows itself to be refined and supple; that soft throttle action really helps with traction at the rear. The suspension absorbs bumps and lumps well, the bike feeling light, agile, and – importantly – unintimidating. It’s a bike almost anyone could take along a dirt road without feeling out of their depth. Riding the Enduro model afterwards, it’s clear that it’s far more hard-edged, no doubt more capable off-road, but again, the difference in characteristics highlights the difference between the two bikes and the effort SWM has gone to in tuning the machine for dual-purpose use.

After a few hours on the bike we make our way back to MotoScotland HQ. I’m following Clive. The roads are empty, well sighted and twisty. The SuperDual comes into its own. That engine is a peach – so much grunt, mated with great refinement and a riding position that feels just right for me at 5’10”, even with a seat height of 898mm that doesn’t seem so intimidating once on it. Obviously, in time I’d like to get back on the bike and see how it copes over a longer distance; to see if the saddle really is all-day comfortable, and what the 18 litre tank range equates to in the real world. These are the questions that buyers of this type of bike will be keen to know.

For now, I can’t help but come away very impressed. There was always a danger of disappointment, such was the expectation. But quite the opposite – the SWM SuperDual is better than I’d expected. Sublime even, which you don’t get to describe many bikes as these days. That it’s such a left-field choice, and that’s it’s taken a small manufacturer from Italy, with a relatively small dealer network here in the UK, to remind us of the charms of a properly set up and characterful single cylinder bike is almost bitter-sweet. Most manufacturers favour twin-cylinders for their travel bikes these days. They don’t make them as light, or as purposeful, as the dual sport bikes of the 80s and 90s. This feels like a return to those heydays.

The nearest rival is CCM’s GP450, a bike that’s now sold out. At £7599 for the SWM (potentially rising to £8199 later in 2017), with everything included – panniers, crash bars, sump guard, spot lights – the SWM would have undercut the CCM by a fair margin, and while not quite as light, the bigger engine makes it a much more suited proposition to road work. The good news is that CCM is currently working on using the same 650 engines in its own revised GP Adventure – the same motor that’s powering CCM’s already sold-out Spitfire street scrambler. Portuguese company AJP also uses the engine in its own take on a dual-sport bike, which, to be fair, is far more enduro-focused than this SWM SuperDual.

For me, SWM has nailed it in delivering a bike that is as exciting on the road as it is off-road. Usually, there are compromises in asking a bike to excel at two different things, but in this case, on this albeit brief first test ride, the engineers from Italy, spending Chinese money, have cracked it. This could, and should, be the making of the brand.

For more information on off-road skills tuition by Clive and the rest of the team at MotoScotland, visit their website at www.motoscotland.com. They have a range of bikes, from beginner-friendly 125cc up to the full range of SWMs, including the 650, and can cater for all levels of riding skills, from those new to off-road, all the way up to advanced. 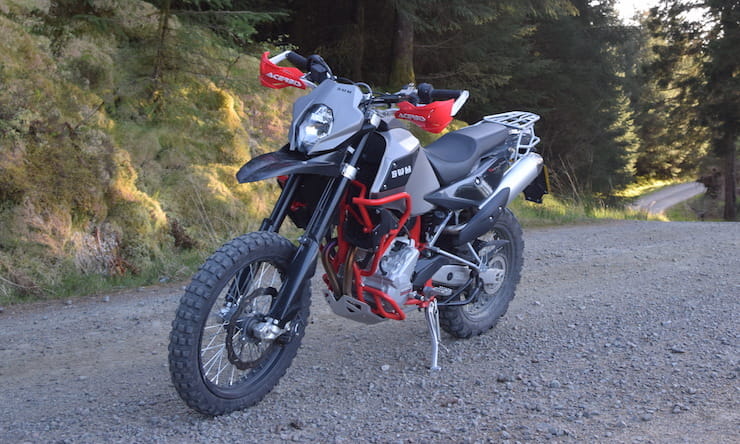