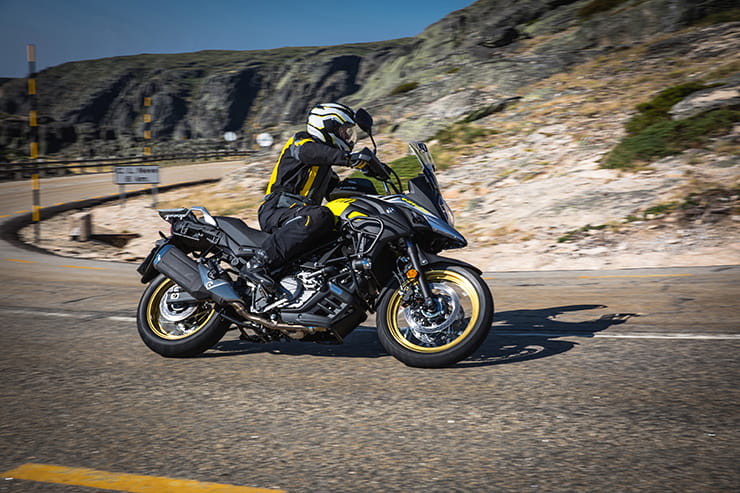 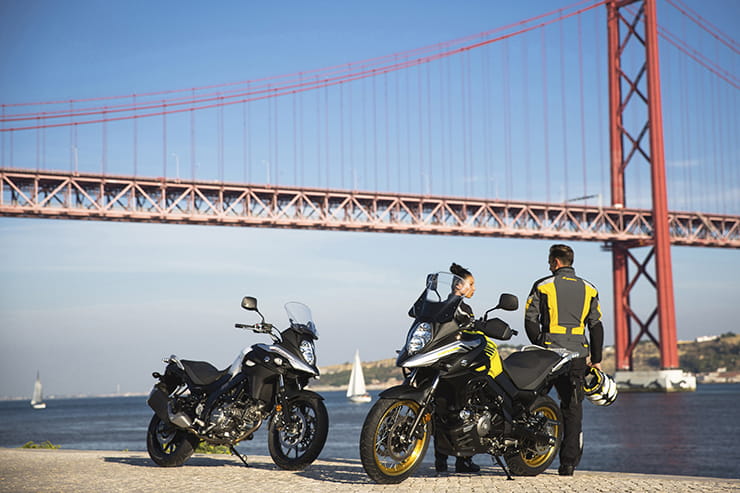 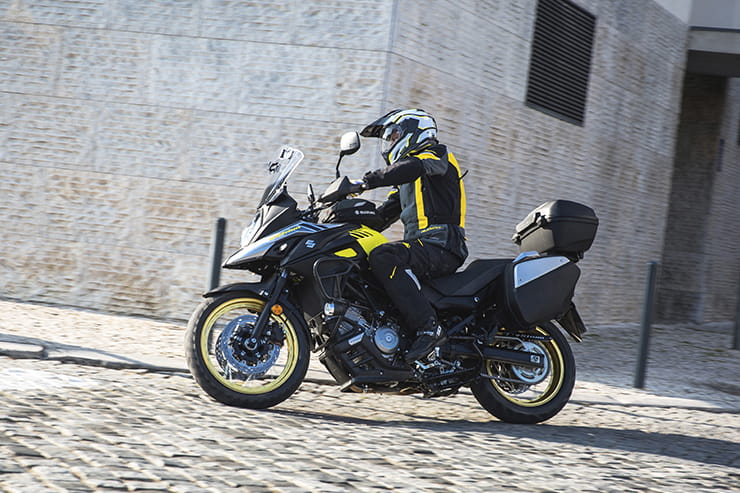 Suzuki’s middleweight adventure bike has been a huge success story for the firm and since its launch in 2004 has been a regular best seller in its category. Cheap, reliable and practical, the V-Strom 650 has it all – aside from possibly looks, which have always been a V-Strom Achilles’ Heel. After an update and visual change in 2011 (better but still a bit odd) the V-Strom 650 once again evolved in 2017 to become a really cool-looking mini-adventurer that now had a more rugged sibling, the V-Strom 650XT. With traction control and ABS as standard, the well-priced V-Strom 650 makes for a really appealing prospect for those fresh to two wheels looking for an easy-going day-to-day bike that is also totally happy to spend a few days touring. And more experienced riders will certainly fall for its charms as it makes a brilliant second bike when you want to avoid getting your ‘best’ bike all messed up on a daily commute.

With 71bhp and 46ftlb of torque, the 645cc V-twin is peppy and sporty enough to cause a bit of excitement yet more importantly is also very slick and easy to use. It’s a totally non-threatening engine with a beautiful throttle connection and the ability to pull any of its six gears with no effort at all. Overall, it’s just a lovely balance of power and performance and you can see why so many riders the world over have warmed to it.

Aside from a twin-spark head, very little has really ever changed with Suzuki’s V-twin and in all honesty, why chance messing up such a wonderful, and reliable, formula. The main changes have revolved around meeting emissions regulations and that’s more down to the exhaust and fuel injection than the physical motor. That said, the 2017 V-Strom inherits the SV650’s upgraded engine with a claimed 60 components changed, larger valves, new pistons and SCEM-coated cylinders. Not only that, the 2017 bike meets Euro4 regulations thanks to a new fuel injection system and also gains Suzuki’s Easy Start System (which is just a case of touching the starter button once rather than holding it in) and Low RPM Assist, which detects when the clutch is about to be engaged and lifts the revs slightly to help prevent a stall. As a used buy, there is little of major mechanical worry to be aware of however as with all SV-motored models, you need to check the front cylinder well. As it is so exposed to road crud the exhaust studs rust really badly and seize, making removing them a fight, and water can collect in the sparkplug’s recess (there is a drain channel, stick some wire up it to keep it clean) causing the plug to corrode and leading to a possible miss-fire. Not exactly huge issues and ones that a fender extender helps prevent. If the twin runs low on oil you can get major internal damage, but this is rare as they don’t drink oil, and servicing is also quite cheap. The V-Strom needs a small service every 4000 miles and a major at 7500 with valve clearances at 14,500 miles. Swapping the oil and filters is a very easy home DIY job and most owners do this themselves. The V-Strom’s gearbox is slick and reliable and the exhaust surprisingly solid. On a bike built in 2017 there should be no rust or cracking issues, but give it a good look and also check the radiator for stone damage or leaks. Overall, if it looks clean, has a bit of service history and little corrosion, all will be well with the rugged and reliable V-Strom 650. 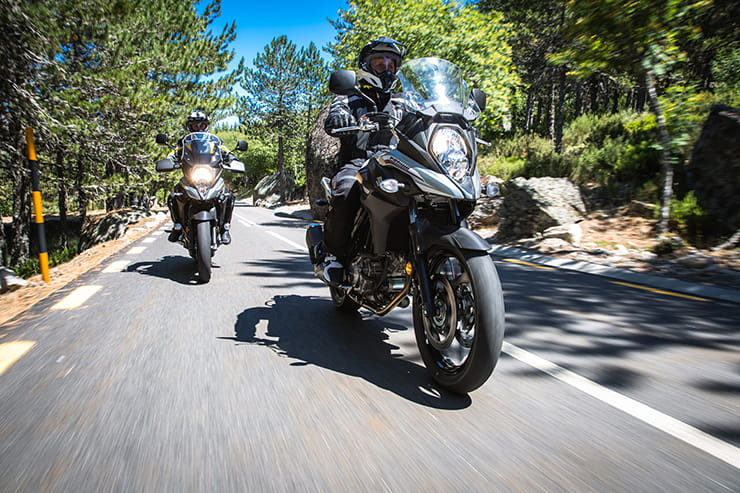 You can expect to easily record 60-70mpg on a V-Strom during general use, which is incredibly impressive considering its small capacity. This gives a theoretical tank range of over 280 miles from its 20-litre tank, which is superb.

The 2017 update was mainly a motor and styling upgrade and that means the handling is pretty much unchanged from before, which is no bad thing. A huge part of the V-Strom’s charm is the fact this middleweight is so light and agile and that is down to a really good chassis balance. Fun in the corners and with suspension that although basic responds really well, the V-Strom is a bike that just gets on with the job in hand and never complains. Fully loaded up and with a pillion it can feel a bit softly sprung but there is the ability to up the preload on the shock to counteract the extra weight, which is worth doing (as long as it isn’t seized, check it moves). A few owners complain about rusty spokes on the XT model, so keep on top of them with anti-corrosion spray and always ensure they are dry if you are putting the bike away for a while and also keep an eye on the silencer clamps, which like to rust. Overall, the chassis is very robust in terms of its quality it is just the occasional fastener that lets the side down.

The 2017 V-Strom models get ABS as standard and the two-piston sliding calipers are adequate for what is asked of them. They aren’t the strongest set-up in the world but SV racers use them so all that is needed is a set of braided lines and new pads if you really want to up the stopping power. If the caliper is sticky a rebuild kit is only £25, so that’s no drama. 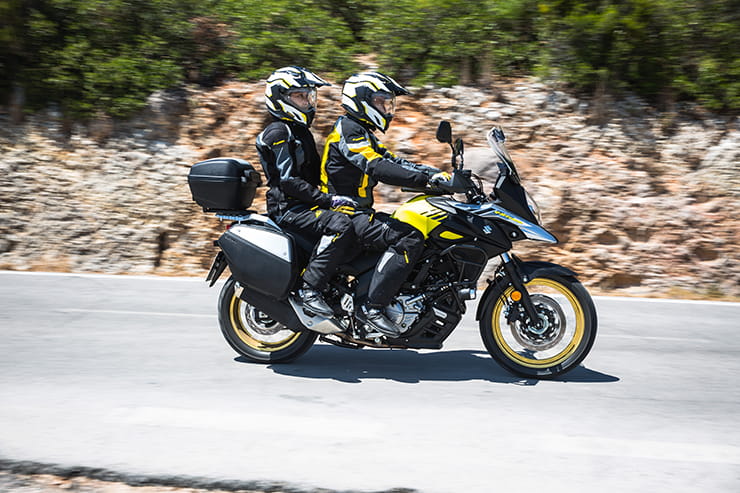 The V-Strom 650 makes for a brilliant lightweight tourer and there is no reason at all why you can’t take one on a trip around Europe. Some riders find the pegs a touch high but this is personal preference and there are a few seat and taller screen options out there to help make it even more comfortable. Due to its weight and relatively small motor, touring is ideally best done solo but if you do want to take a passenger the V-Strom is capable but the suspension and motor will complain a bit.

With ABS and two-stage traction control, the V-Strom has most boxes ticked. It is pleasing to see a gear indicator and fuel gauge on the dash and there is even a 12v socket to take your heated kit. The Low RPM Assist is helpful but not necessary and the same is true of the one-touch start. If you are talking extras, well the world’s your lobster. Suzuki sell a huge range to make the practical V-Strom even more user-friendly and heated grips, luggage, taller screens, crash protection and top boxes are all very common. A lot of owners opt for the centre stand, which is a great option, and a side stand extension plate helps prevent soggy soil tip-overs. Those more adventurous can get a bash plate and engine protector bars. The aftermarket world is also pretty full of accessories so always spend a bit of time checking out the options before you buy as a lot of the kit is identical in its function but far cheaper from different suppliers.

There is so much to like about Suzuki’s mini adventure bike and if you are after a hack to see off a dull commute or a lightweight first bike adventure bike, the V-Strom 650 is a brilliant option. And, best of all, not only is it cheap the 2017-onwards bike also looks pretty good to boot with the XT pleasingly rugged.

Three things we love about the V-Strom 650… 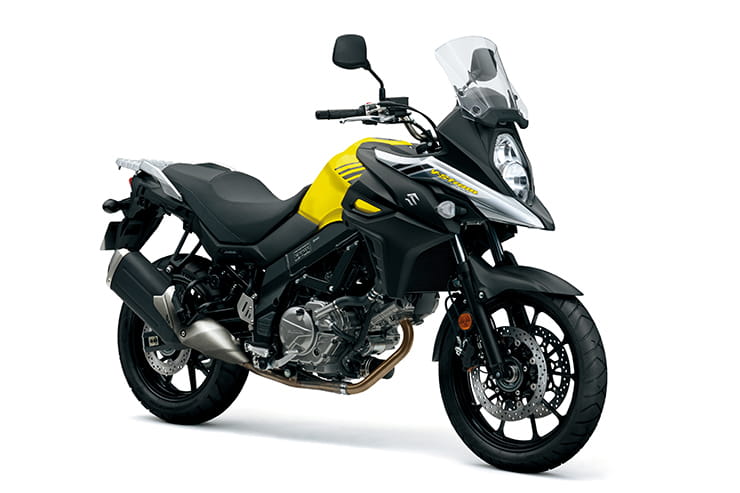 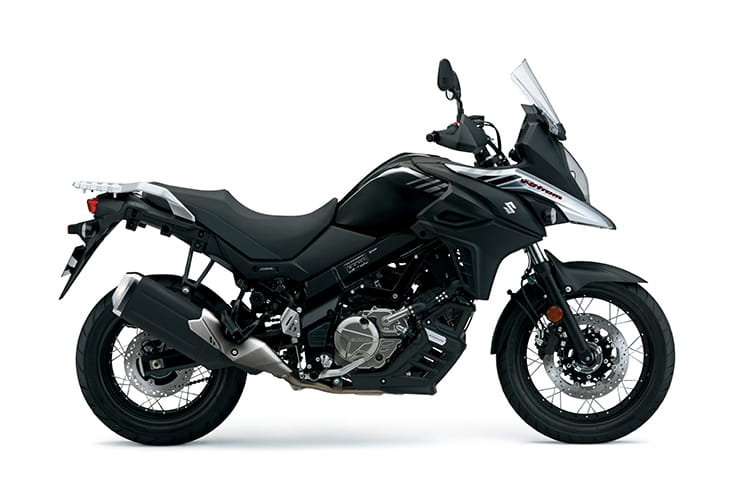