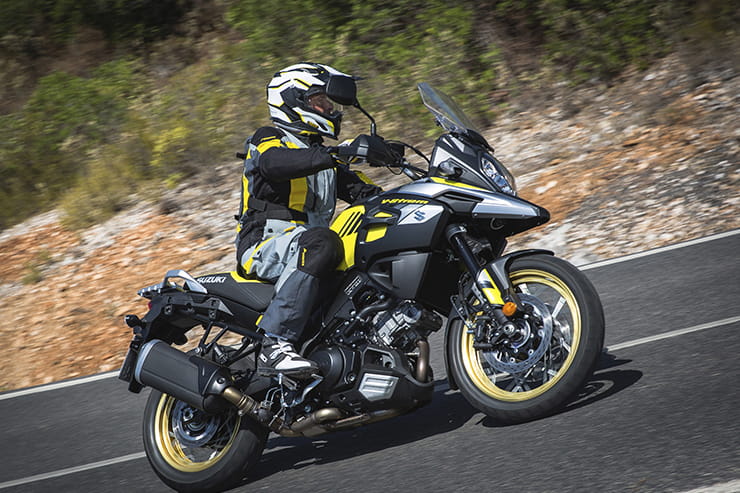 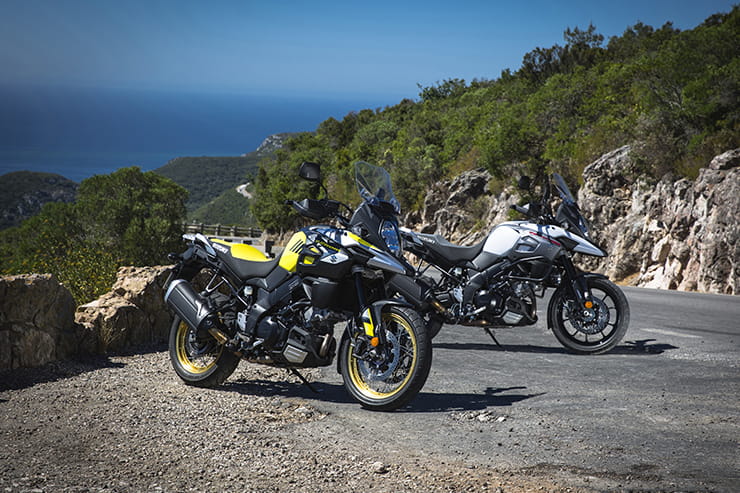 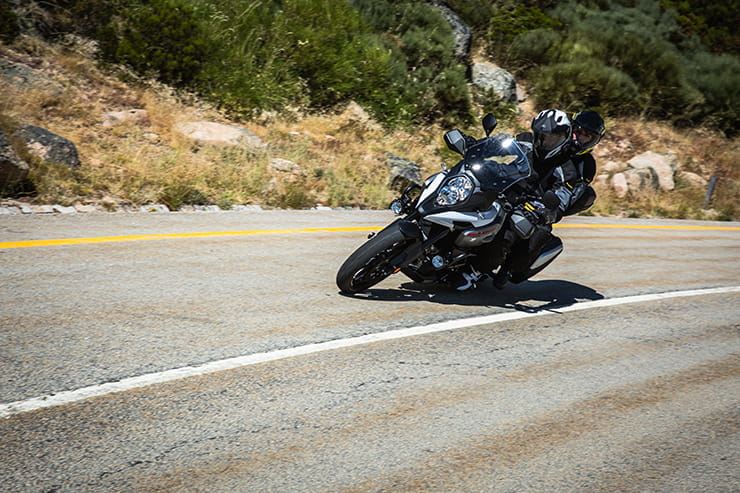 Adventure bikes come in lots of shapes and sizes, and it is quite hard sometimes for a manufacturer to ensure their offering stands out – well, visually at least. In the case of the V-Strom 1000, Suzuki certainly can’t be accused of not creating a bike that, well, let’s just say it is hard to ignore... First launched in 2002, as well as a bit of an odd name, the V-Strom has always been cursed with a somewhat ‘challenging’ look. The original model was certainly met with a lot of scepticism but that didn’t stop it selling well and when it was dropped from the firm’s model range in 2008 there was much distress from its growing fan base. In 2014 Suzuki listened and released an all-new (sort of...) V-Strom 1000 that came with a fresh look, updated engine, better tech and, most importantly of all, still a lovely low price tag. It may not be the sexiest of adventure bikes (the 2017 XT model is a bit cooler) but the V-Strom remains a really solid performer that is cheap, reliable and makes for a wonderful tourer that can merrily smash out the motorway miles. If not possibly take to the dirt...

The low end of the V-Strom price bracket is around £5000, which will get you a well-used (over 20,000 miles) bike in a dealership. If you can save up an extra £1000 you should be able to secure one that has sub-10,000 miles and is in better condition, so aim for this point. If you desperately want cornering ABS you will need the 2017 generation, whose prices start at £6800 (the XT adds a few quid but not much). The top-end for a V-Strom 1000 is £8000 which is probably best avoided as prices for the updated 1050 generation start at the same number and it is a slightly more advanced motorcycle and realistically a better bet for most riders.

The V-Strom uses a heavily re-worked V-twin that can trace its heritage way back to the TL1000 models, however, don’t let that put you off. Now boasting an increased 1037cc capacity the V-twin is a really beautiful motor that has lots of smooth torque and hardly a hint of a vibration. It’s a really lazy engine to ride and that means everything is pleasingly effortless and there is no need to rev it anywhere near its 9000rpm limit, instead keep it in the meat of its mid-range and relax.

The V-twin engine is a thoroughly tried and tested unit and in its bigger capacity guise is a really cracking motor that has been refined and enhanced to make it even better for road riders. Although technically there are two versions, a Euro3 and the 2017-onwards Euro4 model, in reality they are basically identical but the newer one loses 2Nm of torque due to meeting emissions regulations. As well as a lovely light slip and assist clutch, the V-Strom’s gearbox is slick and precise and although it lacks the option of an up/down shifter, this is no bad thing. Reliability of the motor itself is good but some owners have had ECU issues, which will probably have been sorted by now. The service intervals are every 4000 miles (technically 4000, 7500, 11,000 and then 14,500 miles) with the valve clearance check at 14,500-miles, although everyone does it at 15,000. A fairly cheap bike to service, expect to pay £200 for a small, £350 for a major and £500 for a valve-clearance service (also includes swapping the plugs), which isn’t bad at all. The exhaust system has an SET valve (exhaust valve) so always check that is moving freely but pleasingly the exhaust seems fairly robust and cracks or holes are rare. Always inspect the radiator as this is quite susceptible to leaks not only through stone damage but also rust as water and mud collects in it, leading to rot. 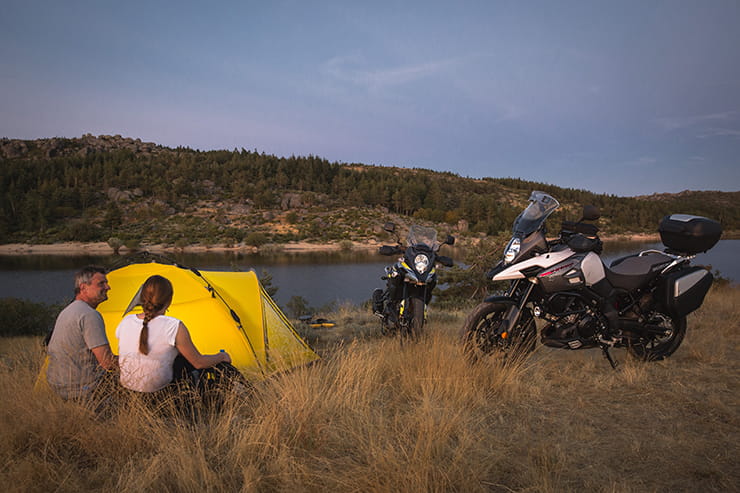 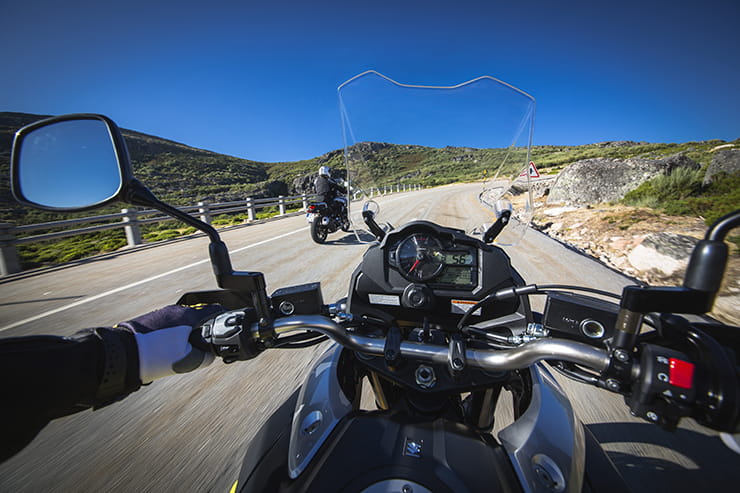 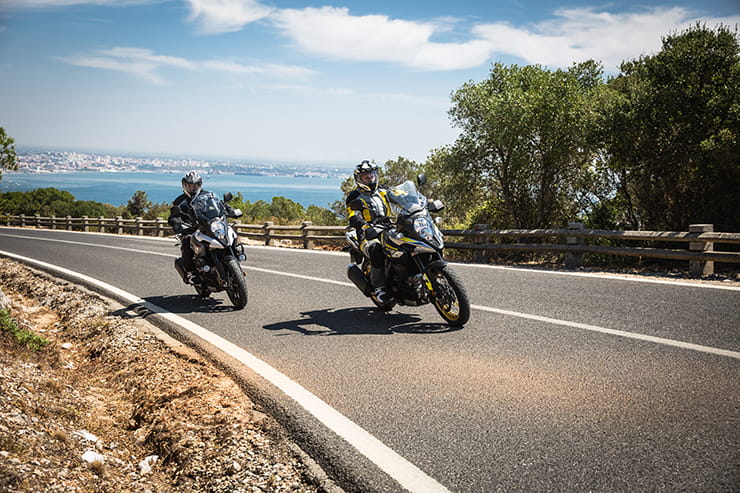 Owners report anything from 45 to 60mpg is achievable from the V-Strom, so you should be able to squeeze at least 200 miles from its 20-litre tank. Insurance is also cheap as it isn’t that desirable to thieves and isn’t a very powerful adventure bike, making the V-Strom tempting if you are on a budget yet still want to go touring.

Although not billed as a sporty adventure bike, the V-Strom is quite adept in the bends and can certainly be enjoyed. Fully adjustable suspension front and rear (there is a handy remote preload knob on the rear) is nice to see and it carries its weight well. The V-twin engine doesn’t make the bike feel too top-heavy and on a flowing road the Suzuki is excellent, even more so if you fit some road-orientated adventure tyres to the 19-inch front wheel instead of the semi-chunky ones that some riders prefer as they look cool. A seat height of 851mm may sound quite high but in reality the narrowness of a V-twin means that it doesn’t feel that tall (there is a low seat option) and the Strom isn’t unwieldy at slow speed. However it isn’t all plain sailing and owners do report that the finish can (as always...) be a little poor with rust appearing on fasteners and around the brake discs, which is a shame.

The Tokico monoblock calipers have lots of bite but in typical Suzuki fashion, the OE pads are crap and the rubber lines will need replacing by now. Swap these out for high friction pads and braided steel lines (this will require a professional as the ABS pump will need bleeding) and you will instantly feel the difference. The ABS system isn’t bad on the early bike and on the later one has the extra assurance of cornering ABS, which has been developed by Bosch for Suzuki. It’s a linked system and is pretty good and probably worth paying a bit extra to have if you are planning on covering big miles on unfamiliar foreign roads. 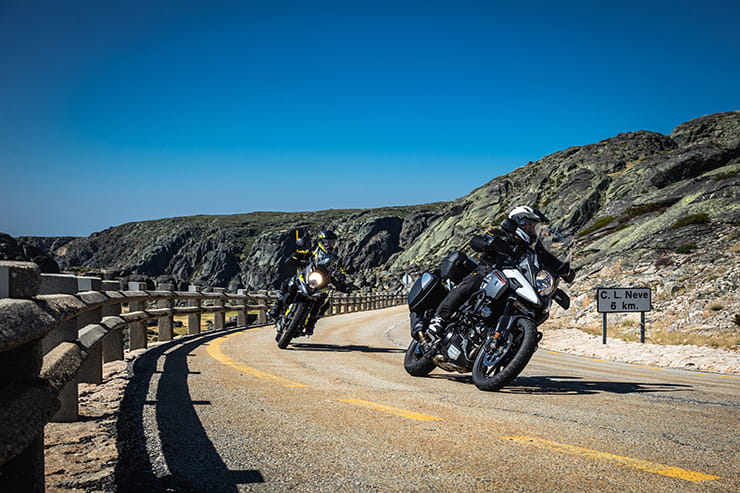 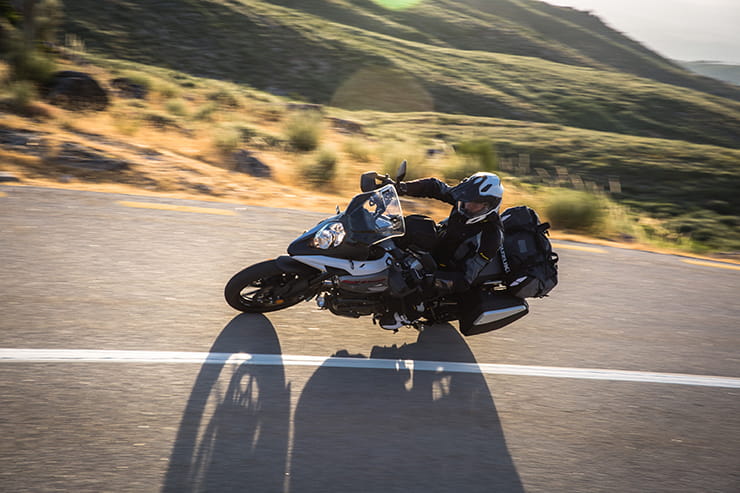 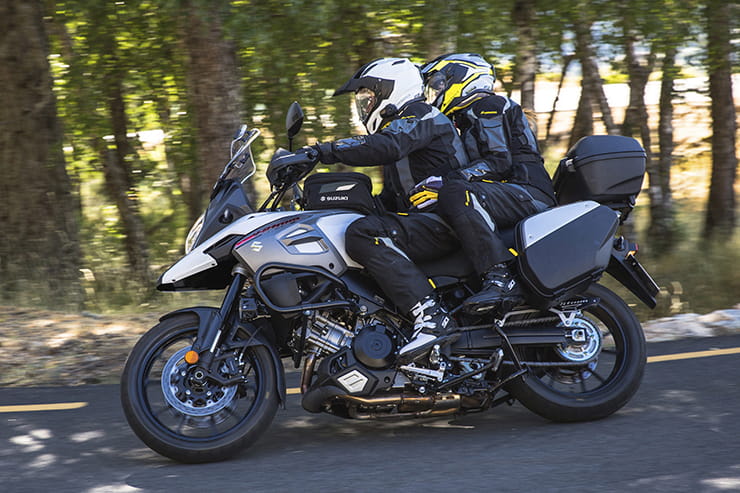 The 2017 bike has a slightly reworked nose fairing compared to the 2014 bike with 49mm more screen height - but you don’t really notice that much of a difference while on the go and both V-Stroms have an adjustable screen, which raises by 15mm or 30mm. If you are looking at covering miles the V-Strom is an excellent choice as (with a bigger screen fitted) it is very comfortable with a good seat and relaxed riding position for both the rider and pillion. Adding the optional centre stand is a good idea for touring as you will need to lube the drive chain (no shafts here...) and heated grips are also worthwhile additions. Overall, it’s a great mile-muncher and its fully-adjustable suspension means you can set it for a softer ride or to take into account the extra weight of a pillion and/or luggage. Neatly, you get a 12v socket (located by the dash) as standard.

Starting with the basics, the V-Strom 1000 comes with a three-stage (2 modes and off) traction control system that works on wheel slip and is not angle-sensitive. The 2017-onwards bike adds angle-sensitivity (Suzuki call it Multi Track Brake System) to the ABS through a five-axis IMU which works with the linked brakes as well. And that’s not all. It’s not a great benefit, but the updated bike also has Low RPM Assist, which increases the revs slightly when it detects the clutch is about to be engaged to help prevent a stall, and also Suzuki Easy Start, which is basically a single push start button that you don’t have to hold down until the bike fires into life. In terms of accessories, the three-piece luggage system’s mounting points are integrated into the bike, which is good, and the optional top box comes in either a 55 or 35-litre capacity (be aware you can’t use the 55-litre one with the panniers). Pleasingly, Suzuki supply key cylinders for the luggage with the bike, so check they are there if you want to add luggage. Other good additions from Suzuki include a centre stand, heated grips, LED lights, low seat, taller screen and brush guards but lot of aftermarket firms sell their ow range of accessories. In general, most V-Strom owners tend to go with commuting or touring-targeted extras so loud pipes etc are pretty rare. If you want a bit more of a rugged look, Suzuki launched the XT version in 2017 that came with spoke wheels and a few bolt-on bits including chunky bars to make it more adventure-styled for an extra £500.

Suzuki have sold a lot of V-Strom 1000 models and owners really fall for their easy-going nature and practicality. It’s not the sexiest of adventure bikes but it is a really solid performer that just gets on with the job in hand – be that touring, commuting or just a nice ride out with either a solo rider or a pillion as well. The finish can be a little suspect but as long as you are careful when it comes to cleaning it all should be well.

Three things we love about the V-Strom 1000 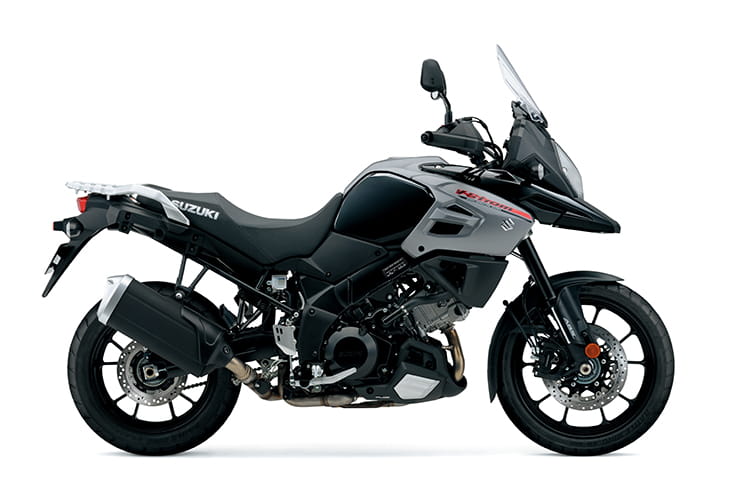 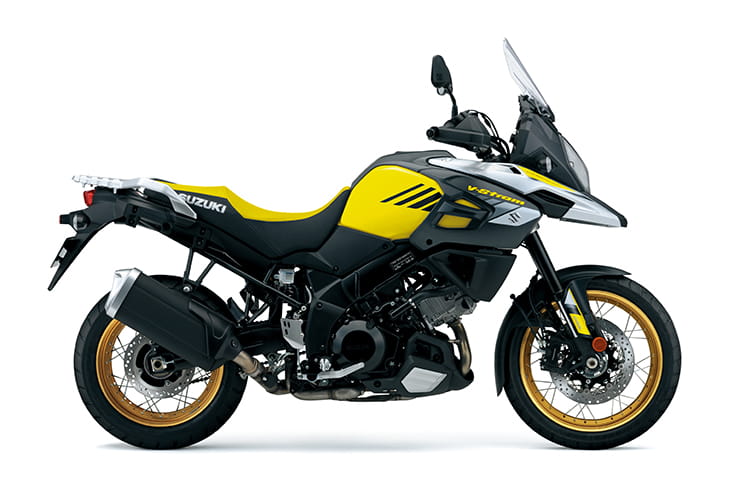 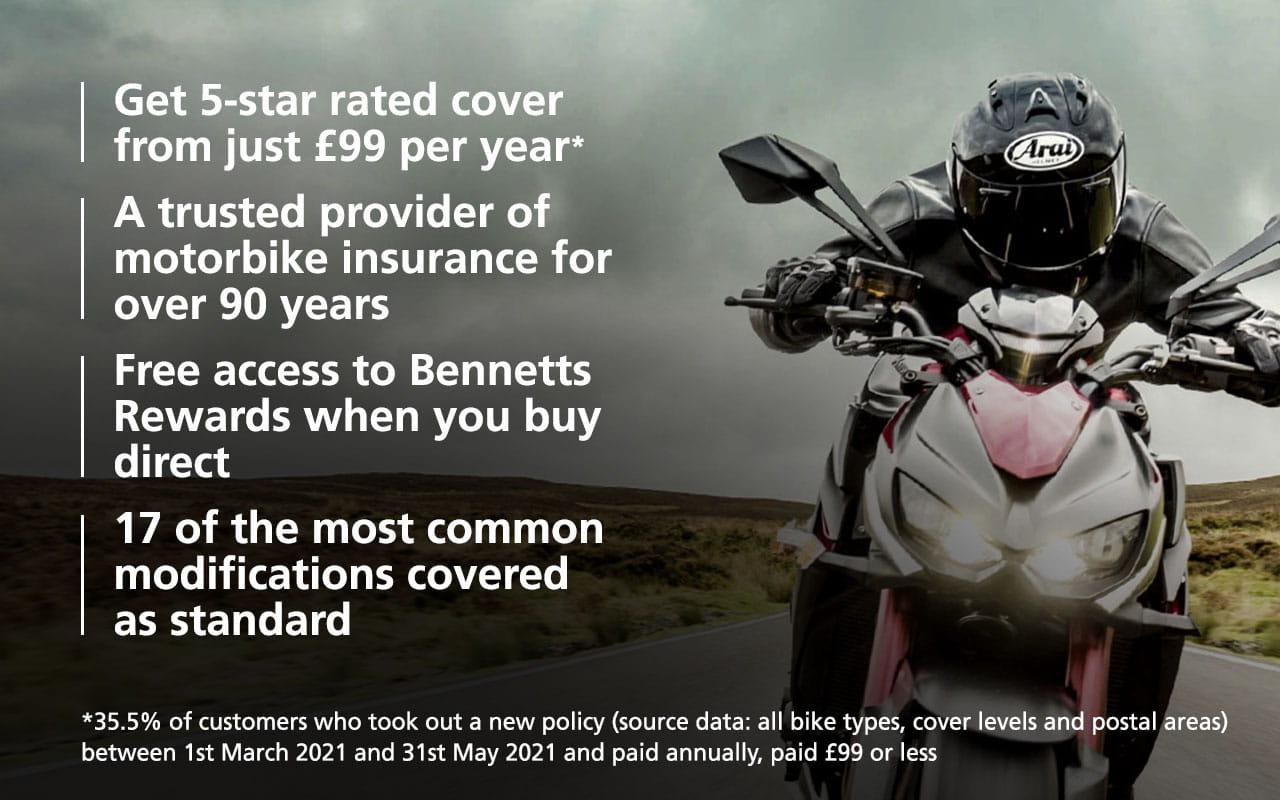