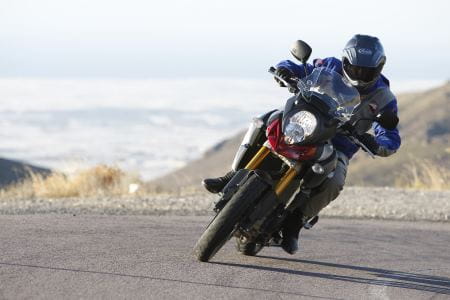 Suzuki must be kicking themselves for missing out on the recent boom in large-capacity adventure bikes, having had no entry in the class since the previous V-Strom 1000 was dropped in 2008 because it couldn’t meet Euro 3 emissions regs. The bigger model wasn’t as successful as its popular 650 namesake but it contributed a quarter of the total of almost 190,000 V-Stroms sold since its launch 12 years ago.

This new 1000 was shaped with much input from focus groups, partly because Suzuki — whose new model development was slowed by the credit crunch, hence the delay — wanted to make it an appealing step up for those 650 owners. Most of the riders who were surveyed said they never took their bikes off-road, which is why Suzuki are saying that the 1000, too, is not designed for off-road use. It’s intended for “enjoyable, comfortable on-road long-distance touring”.

It follows the old model’s format of liquid-cooled, dohc eight-valve V-twin engine in a twin-spar aluminium frame, but almost all the details are changed. Capacity is increased from 996 to 1037cc, thanks to 2mm bigger pistons. New cylinder heads, conrods and crankshaft combine to give a hefty increase in midrange torque, especially around 4000rpm, although the maximum power output goes up by only 2bhp, to 99bhp at 8000rpm. 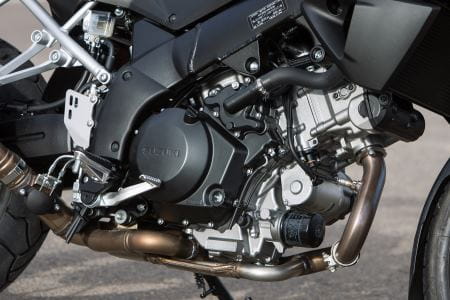 Styling is pleasant enough and clearly adventure bike inspired, complete with a small screen typical of the class. This can be fine-tuned for angle by hand but vertical adjustment is limited and requires an Allen key. The seat is quite high at 850mm but manages to be big, thick and comfortable yet also quite narrow at the front, which helps with low-speed manoeuvrability. Shame it can’t be adjusted for height.

Engine performance is respectable, if not particularly exciting. Low-rev torque is much improved, with a higher peak output delivered at just 4000rpm. The V-Strom pulls strongly almost from tickover, and keeps on accelerating through the midrange, with no great power step till the redline at 9250rpm. The bike cruises smoothly and effortlessly at 80mph, and accelerates to over 120mph if requested, but feels slightly flat when you rev it harder through the six-speed box. The Strom also has Suzuki’s first traction control system, which was noticeable only when deliberately provoked.

The chassis is set up more for comfort than agility, so on standard settings the Suzuki was pretty soft and steered rather slowly. A few turns of the useful remote shock preload knob made it more responsive, and good fun on the twisty roads of southern Spain. Braking from the uprated, ABS-equipped system was excellent too, with powerful four-pot Tokico monobloc calipers up front. 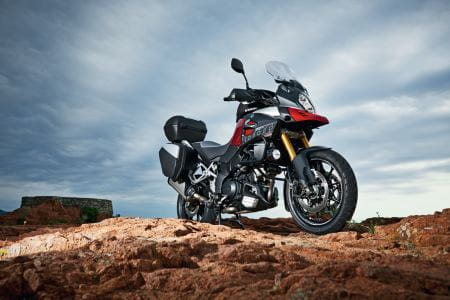 As a tourer the V-Strom was fairly promising. Its screen gave some useful protection without too much turbulence, despite being too low for tall riders. Shame there’s no hand protection, but at least heated grips and hand guards are on the list of accessories, along with fog lamps, crash bars, higher and lower seats, top-box and panniers. A well designed digital instrument panel, luggage rack and pillion grab-handles come as standard. Suzuki say fuel economy is improved by 16 per cent. Fuel capacity is reduced by two litres to 20 litres but most owners should average at least 45mpg for a range of at least 160 miles.

Provided you don’t mind the idea of an adventure styled bike that’s not built to go off road, Suzuki’s reborn V-twin is a decent if unspectacular effort that fits between the 650 V-Strom and more expensive and feature-laden open-class models. At £9999 plus on-the-road charge it costs slightly more than rivals such as Kawasaki’s Versys 1000 and Triumph’s Tiger Sport. But if you fancy an adventure styled V-twin it’s comfortable, respectably quick and a useful all-rounder. If only Suzuki had launched it five years ago they could have had a hit on their hands.