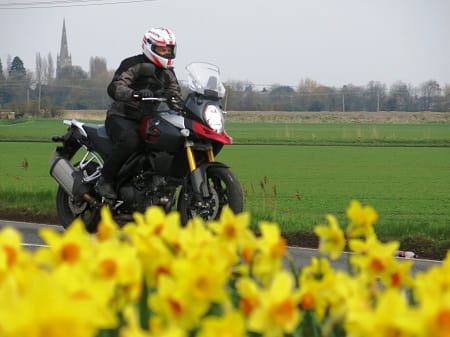 It’s a tough life being an adventure bike. For one you have to be everything to all men – ride to work, take the family away for the weekend fully loaded up, look like you’re ready to ride the Road of Bones when you’re actually just nipping out on a Sunday morning to grab a paper, and even tackle the occasional bit of off-road riding.

And if that’s not enough then there’s that pesky all-conquering BMW R1200GS to live up to. It’s the bike that defined the class and has been a runaway sales success for BMW pretty much since it launched the R1100GS back in 1994.

So it’s a brave move by Suzuki to update the V-Strom 1000 with an essentially an all-new bike, a heavily modified 100bhp motor and all-new styling. It’s not radical, but it is a decent bike with bags of comfort, the obligatory beaky styling, and one of the nicest motors fitted to any adventure bike. 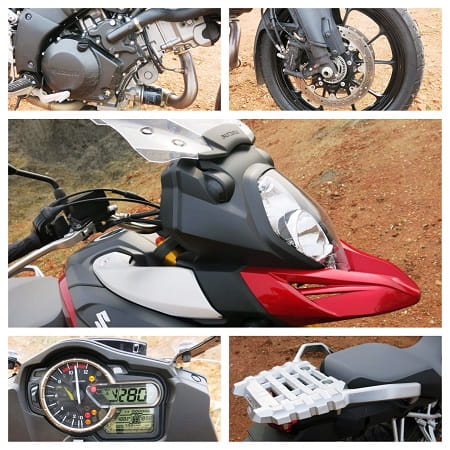 TECHNICAL:
Powerful it isn’t especially compared to the sportier end of the adventure scale - the 150bhp+ Ducati Multistrada and the KTM Adventure - but then it doesn’t need to be.

The motor has been retuned from the old V-Strom 1000 to give 100bhp and bags of torque. It makes a claimed 75ftlb of torque at just 4000rpm, and the motor has been fully reworked so it now has a 2mm bigger bore, increasing capacity from 996cc to 1037cc.

There’s a host of other changes too with a new fuel injection management system, 10 fuel injectors (up from four), a slipper clutch, a lazier and longer sixth gear, better cooling, Suzuki’s first ever traction control system, and a new single exit exhaust system which weighs 4.7kg lighter than the old dual pipe model first launched in 2002. On paper the bike is lighter than the GS too. BWM claim 238kg full-fuelled and ready to ride, Suzuki claim 228kg fully-fuelled for the Strom.

There’s also a new, slimmer chassis with aluminium swingarm, upside down KYB front forks  and a new KYB fully-adjustable rear shock. There are new four-piston Tokico monoblock front calipers with Bosch ABS system. Because it's an adventure bike, albeit one that will spend tome on the road mostly, it also has lighter 10-spoke wheels with new Bridgestone TrailWing BW501 Front and BW502 rear.

Add in an improved riding position for both rider and improved comfort for the pillion. The handlebars have been moved back by 34.2mm and the footrests moved back by 15mm for more leg room and you can see this is a very different motorcycle, not only to look at.

In fact, perhaps the only thing not improved on the new bike is the fuel tank which is down from 22 litres to 20 litres, although Suzuki claim fuel consumption on the new bike is upped by 16 per cent to compensate. Admittedly we rode it hard but had 38.5mpg on test. 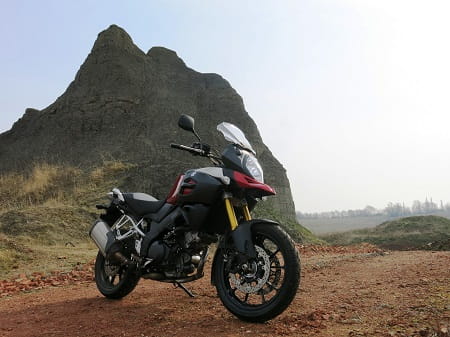 STYLING:
If imitation is the sincerest form of flattery then the fact that one of my colleagues though there was a GS sat in the bike park at work must be one up for Suzuki.

It takes the beaky styling made famous by the R1100GS and takes it on. However, the styling (and the beak) actually harks back to the 1988 Suzuki DR750S. Suzuki were keen to take styling cues from this bike and combined it with plastic and aluminium parts to create the rugged all-rounder look.

At the front the headlight uses twin-stacked lamps as seen on the Suzuki GSX-R range. 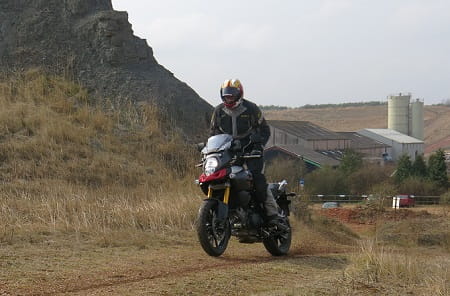 RIDING:
It may not have all the toys of an R1200GS, but what more do you want? There’s a couple of odometers, a volt meter, average fuel consumption (38.5mpg average on test), a fuel gauge and adjustable traction control – full-on, a lighter does or completely off. I say off, but even when it’s switched to off it still stops you giving it full gas when leant over and retards the ignition. Or at least that’s what it feels like. Full gas when leant over, all in the interests of testing you understand.

Why it needs traction control beats me as you’d have more chance of a fully-loaded dumper truck breaking the rear away on the road, than this. It’s a 100bhp torque monster, but I guess the market demands fancy electronic toys, and what the market demands it has to have. I blame BMW.

The motor is really befitting of a big adventure bike. It’s some 25bhp down on the GS but makes so much torque that 90 per cent of the time that won’t bother you. It’s a smooth, friendly lump that doesn’t need to be revved and makes surprisingly rapid progress. More than anything it’s relaxing to ride and stress-free so you can cover big miles in big comfort easily. The motor just gets on with thumping along gently and is virtually vibe free with one of the best gearboxes in motorcycling. The delivery is so smooth, and there's so little snatch from the chain I actually looked down while riding to check there wasn't a shaft drive in place of the sprocket.

The seat is comfortable enough to put in enough distance to ride for a full tank – around 150 miles on test – and the screen can be adjusted for height with tools, or for angle using a ratchet system patented by Suzuki, just click it to one of three positions. In truth, once it’s set, as an owner, you’d just leave it in the position you like. On test it always felt like it wasn’t as strong enough as it needed to be but in terms of the screen itself, it was more than good enough for me at six foot four inches tall. The new set-up of the footrests means there’s plenty of leg room even for the tallest of riders and a gentle stretch to the bars.

It’s never going to be called quick steering but it gets in a corner quickly enough, feels like you could have a party on the handlebars mid corner without upsetting it. The brakes are also a vast improvement on the old bike and were called on at one point when white van man pulled out on me. It stops in a hurry and the ABS system works perfectly. However, you can't switch the ABS off so stopping off-road can be quite an experience and shows Suzuki's true intention for the bike. 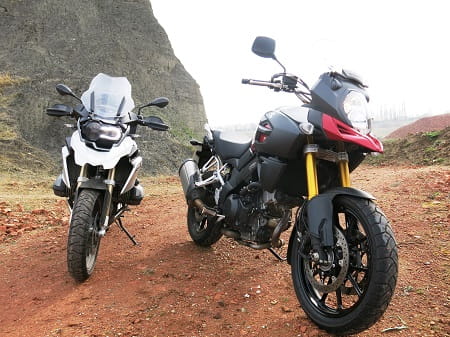 SO, IS IT A GS BEATER?
In a word, no. But don’t let that put you off – the V-Strom 1000 has plenty going for it. It’s big, comfortable, looks the part, is well-made and has a million and one accessory options from heated grips to full luggage as an option from your Suzuki dealer, just like the Beemer. There's a big chunky rack fitted at the back, there's a power socket in the dash for sat navs and other accessories, and the bike is well thought out.

Yes, the BMW is faster, has the right badge, and is just as comfortable, but it’s playing to a slightly different market, and one with a bit more cash in their pocket. It's at the sporty end of the market and better off-road. For most weekend buyers in this market being able to ride off-road is something they will never try, but it's nice to have and boast about.

The Suzuki is just as capable in the real world and I have already suggested a couple of my friend’s buy one. There's no better reccomendation than that.

It’s a great value bike at the right price and there’s a lot to be said for that. As a big tourer with the ability to take on the occasional gravel trail and a bike that you can load up for a weekend away, the Suzuki is a fine alternative and great value to boot.

Thanks to Balderstone BMW for the loan of the GS; www.balderston.net