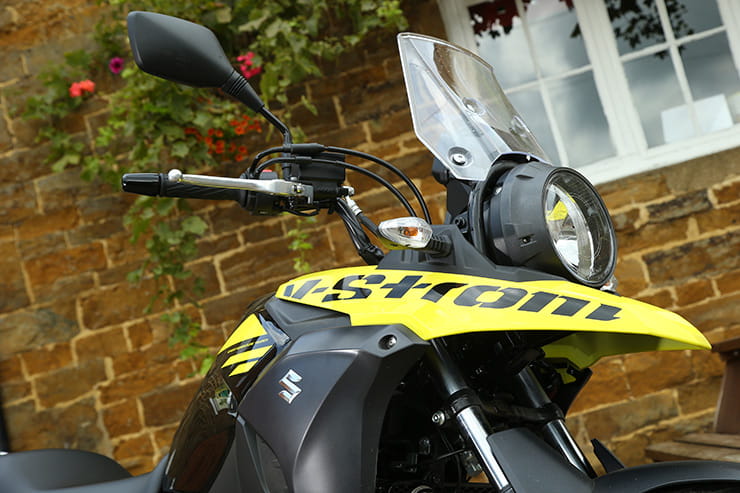 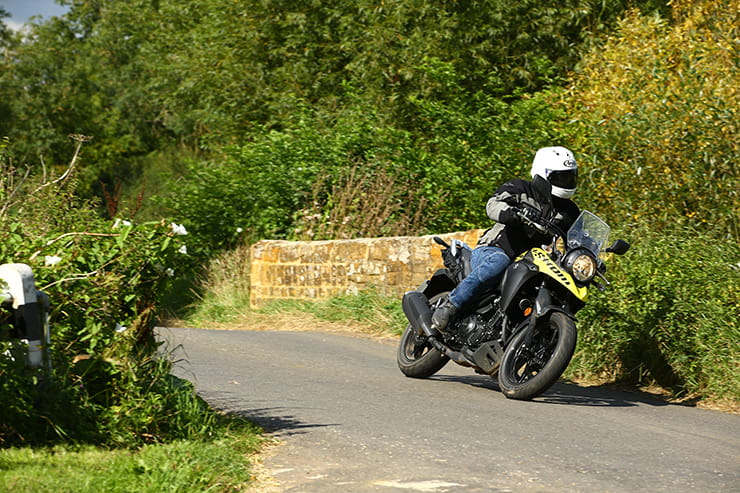 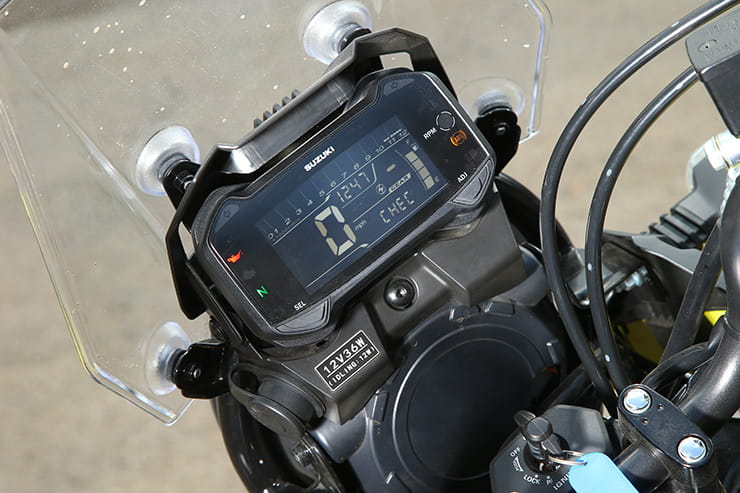 The spirit of adventure must be alive and well in younger riders nowadays as we have seen something of a plethora of A2-legal adventure bikes creeping into the market of late. Just this year Kawasaki have released the Versys-X 300, BMW are threatening to actually get around to eventually building the G310 GS and Honda have released the CRF250L, although this is a bit more off-road than on-road focused. And now Suzuki’s entry into this market is ready to set off exploring – the V-Strom 250.

Powered by the same parallel twin engine that is used in the GSX250R (which is pretty heavily based around the Inazuma 250’s lump), on paper the V-Strom 250 is a really well thought out machine. Ok, the engine’s basics may be as old as the hills, but it has been reworked to make it Euro4-complaiant and that means you get 24.7bhp with 17.3ft-lb of torque as well as claimed economy figures of 88mpg, something that Suzuki say when combined with the 17.3-litre fuel tank give the V-Strom a range of over 310 miles. For a bike aimed at adventure riders and tourers, that’s music to their ears. And the good news doesn’t stop with just the motor. 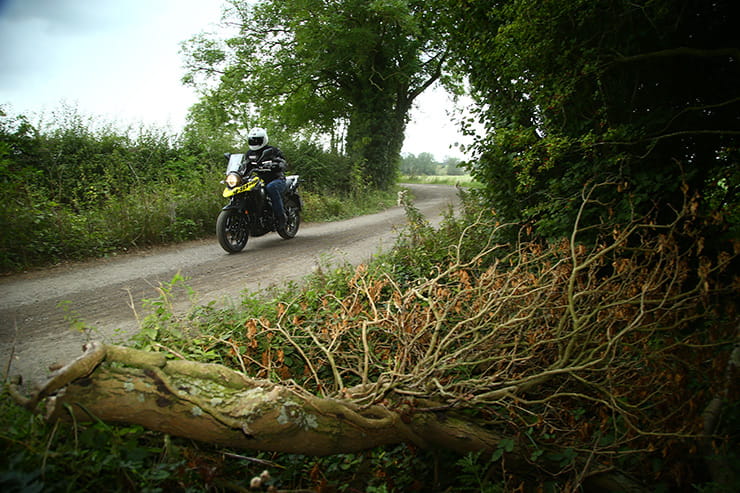 Designed around the slightly odd-sounding concept of ‘massive and smart’, the V-Strom’s chassis is purposely large and roomy for taller riders while also remaining impressively light at just 188kg wet. Add to this an ABS system, LCD dash with a fuel gauge and gear indicator, 17-inch wheels, a screen, tail rack and optional luggage and hand guards as well as more touring-orientated accessories and it’s all very promising and impressive. But there again, so are the competition…

At this point we have to mention price because that’s what sells an A2-legal middleweight machine. The V-Strom 250 retails at £4599 for the basic bike, which is less than the £5149 Versys-X 300 and means you can spec it up for less than the fully-loaded £5899 Adventure or £5549 Urban Kawasaki variants. The BMW should cost in the region of £4900, so that is also a premium over the Suzuki, and it only has one cylinder where the Kawasaki and Suzuki are both parallel twins. So in this context, the V-Strom is already off to a winner! But when you ride the V-Strom it isn’t all quite as rosy. 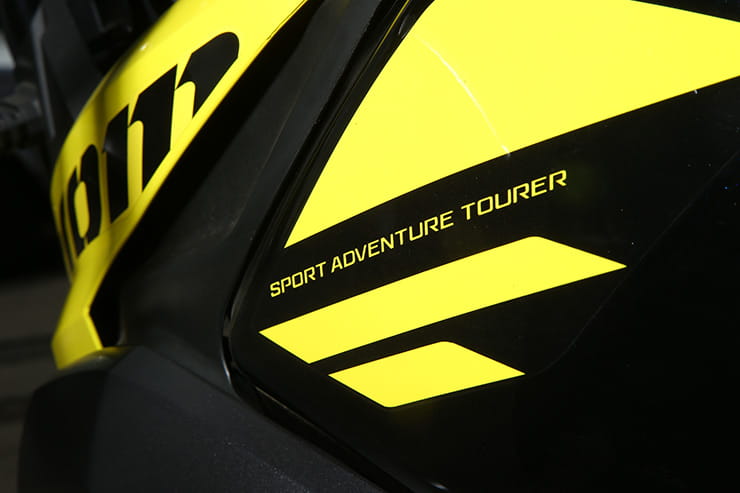 After just a few miles on the V-Strom 250 I couldn’t help but find myself getting annoyed with Suzuki. Not the V-Strom 250 bike, but Suzuki the company. Let me explain. The V-Strom is powered by the Inazuma’s 250 parallel twin, which is a pretty bog standard single overhead cam motor. Suzuki had to give it a bit of a re-work to make it Euro4-compliant, but instead of actually pushing the boat out and giving it some extra capacity to make it stand out from the crowds, they just did the bare minimum. And it is this fact alone that in my opinion ruins what could, and very nearly is, a brilliant bike.

When you ride the V-Strom you quite honestly struggle to work out if it is a 250 or 125, especially after riding the new breed of GSX-R125. While it will top 70mph, it does it in such a laboured fashion it feels asthmatic and disappointing. The engine’s low end pick-up is good, and it is very smooth and vibe-free, but there is just no poke or excitement and it runs out of puff quite quickly. On a machine that Suzuki say is a mini tourer, it needs far more and when you back to back it with the likes of the Kawasaki or BMW it is miles behind in terms of performance. And if you add a pillion it will be even worse. I just don’t get it, Suzuki must have known that Kawasaki had the Ninja 300 engine and BMW were going to make their 313cc single into a GS and that is even before you start to add in the likes of the upcoming KTM 390 adventure bike – why didn’t they arm the V-Strom with a motor that had a fighting chance? 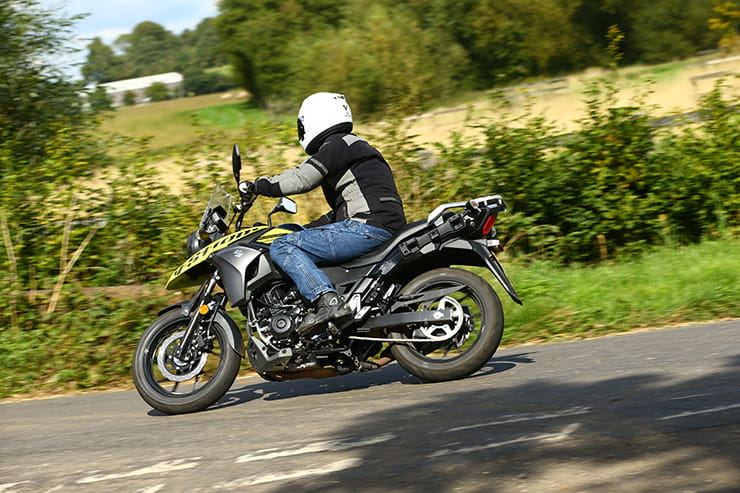 Especially as the V-Strom is more road than off-road orientated where extra power is really beneficial. The V-Strom’s 25bhp is a nothing figure and they could easily have taken it to closer to 40bhp while staying below the A2-licence threshold of 46bhp. Even a bhp figure in the low-30s would have been a significant advancement. So why does this lack of imagination or forethought from Suzuki’s part annoy me so much? Because the rest of the V-Strom 250 is really good. 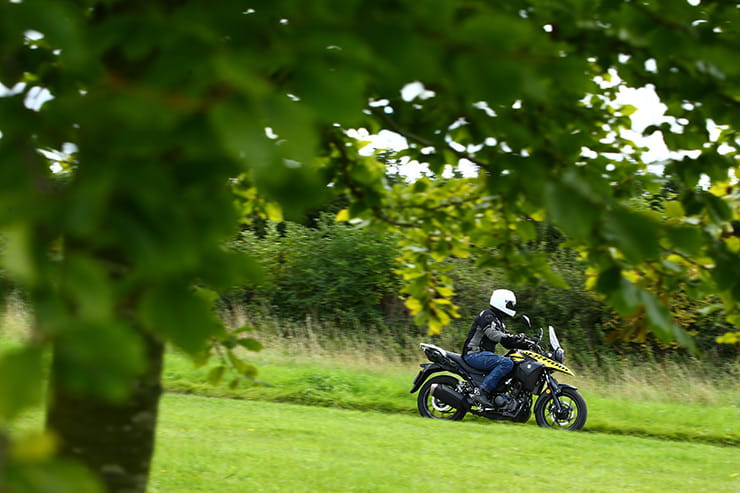 With the V-Strom 250 Suzuki have been very clever and aimed it totally at on-road riders. It has 17-inch wheels and the same tyres as the GSX250R, which I really like. This makes the V-Strom stand out in the mini adventure market as all its rivals have gone for the more off-road wheel sizes. On the road this makes the V-Strom handle extremely well, delivering a ride quality that is both impressive and assured. The suspension is soft and compliant yet not too wobbly and you can certainly hustle it around through the bends. I really enjoyed riding the V-Strom and it has a wonderful ‘big bike’ feel about it that meant that even riders of my size (over six feet) will feel totally comfortable. The screen is a touch on the small size, but this is only an accessory update away if you so wish, but in all honesty, other than that its road manours are hard to fault. The brakes may only be a single disc at the front with a two-piston caliper but it has ABS as standard and is more than up to the job of stopping a 188kg bike. And that’s another factor I liked about the V-Strom 250, with such a light weight it is extremely easy to maneuver at low speed, something I’m sure that newer riders will really appreciate. Even the seat is deeply padded and comfortable, it has a 12-volt accessories power supply and the metal luggage rack is standard equipment. All in all, if it wasn’t for that motor I would be struggling to find fault with the V-Strom. But am I being too critical? 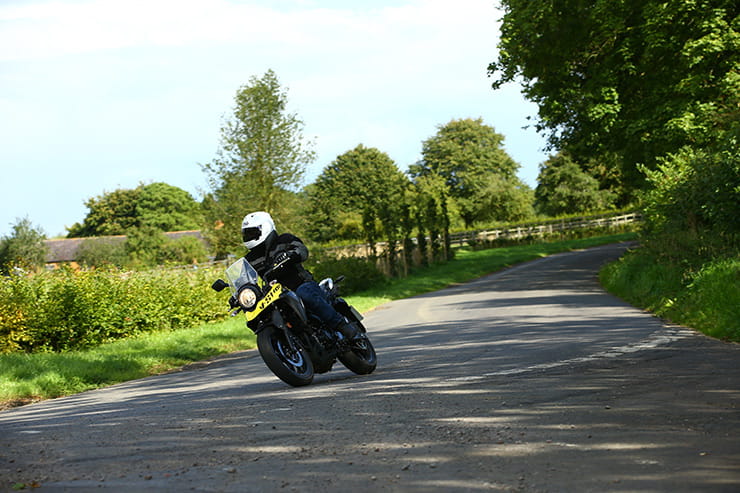 When test riding bikes aimed at less experienced riders I always try and put myself in their position. Yes, I want more power, but would a newer rider? With the V-Strom 250 I am certain the answer will also be yes. The world has moved on from a 250cc parallel twin, as Kawasaki demonstrated when they upped the capacity of their Ninja from 250 to 300. A2-licence holders can ride anything up to 46bhp and while I am happy that Suzuki have chosen to build a lightweight small capacity machine to sit below the V-Strom 650 in their range, it needed to be a minimum of a 300, and in my opinion ideally a 350 with in the region of 35bhp. If they had just done this I’d be shouting from the rooftops for new riders to try the V-Strom out for size as it would have been a bike that had genuine longterm appeal. As it is I can see the engine’s lack of performance quite quickly becoming a frustration and that is a massive shame as the rest of the bike is excellent. 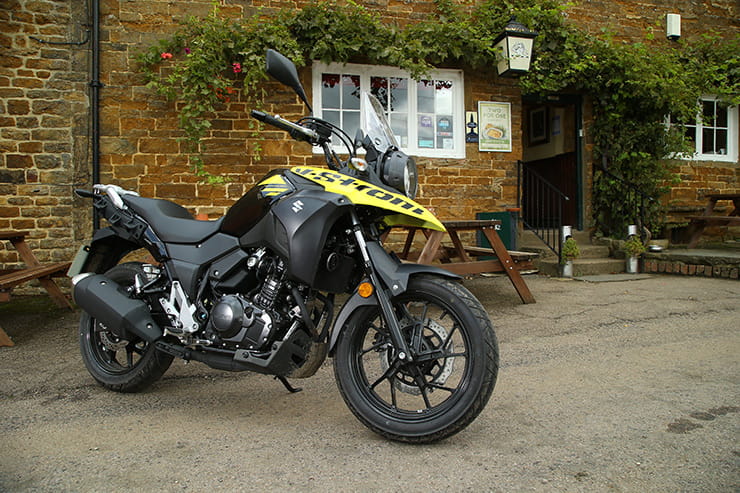