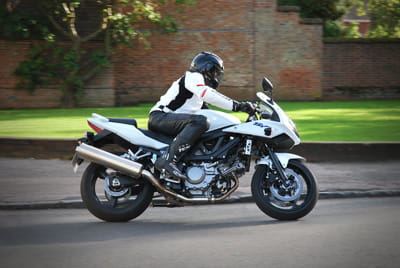 Suzuki’s SV650S is a bike of many personalities and capabilities. A commuting tool; ideal stepping stone to larger capacity bikes; competent everyday middleweight and a racing bike to boot. There aren’t many motorcycles that can carry off such a diverse range of duties.

Its competence is down to two main points: an easy-going 645cc water-cooled V-twin engine, and a chassis that is basic but forgiving.

Being a V-twin, the SV650 is no slouch from the off and always has plenty of grunt when it comes to overtaking. It’s also at home clocking up motorway miles at motorway speed. So far so good, but the engine also has something extra that most mass-produced Japanese engines don’t have – and that is character.

The healthy throb of the two pistons lets you know the SV is alive. Of course it vibrates through the frame at higher revs but then that’s what V-twins do and this is what makes such engines endearing to their owners.

The successful Mini-Twins race series did nothing but good for Suzuki because many SV owners bought their bikes on the basis that reliability on track meant big reliability on the road.

Steering is neutral but gives the sensation of being extremely light at the front end when banked over. Blame this on the horrible standard front tyre and front forks that are underdamped and undersprung. But this is not something that will affect owners who simply want a reliable workhorse.

Being a mass-produced budget bike the SV650S will throw up a few issues if it isn’t cared for. Corrosion around the discs and plated components can take hold if the bike isn’t treated to regular clean and lubricate sessions.

A new SV650S is presently available at a bargain price of £4975. Our advice, if looking for an affordable honest motorcycle, is to grab one while you can. Suzuki has already introduced a new range of thoroughly modern SV650 and so the SV650S’s life span is limited.

SV650S in a nutshell? One of the most sought after motorcycles in the classified sections and second-hand bike showrooms, which says a lot.