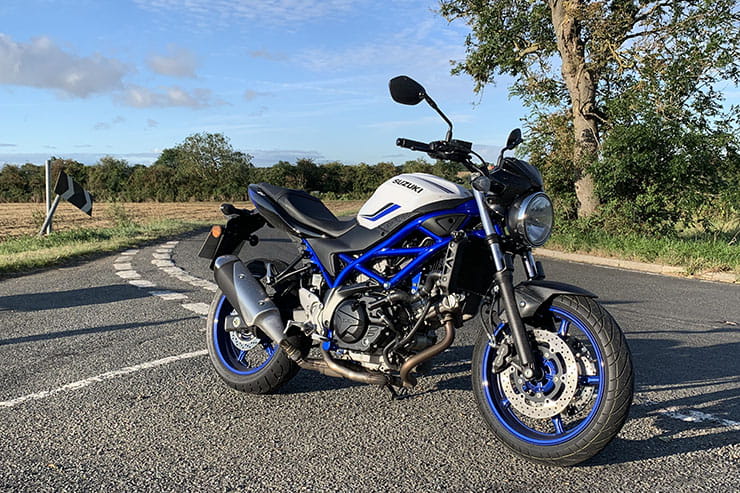 Suzuki’s SV650 is 20 years old this year. The latest version is a little different from the original; fuel injection has replaced the carbs, the frame is a steel trellis unit instead of the original’s alloy, but the performance figures are similar, suspension and brakes too and wet weight is around the same, despite the new bike carrying enough emissions equipment to meet all current Euro 4 requirements.

In essence a 2019 SV650 is as close as we can get to a brand new 1999 bike. It still sells in decent numbers, thanks partly to a reasonable list price and healthy discounts in dealers. It still looks great and offers enough performance for new riders and experienced alike.

So, the question was, ‘If we’d never seen a Suzuki SV650 before and Suzuki had launched this as brand new model for 2019, what would we make of it?

List price is £5999, which, if you are buying on a PCP deal is close enough to the Yamaha, Honda and Kawasaki competition to not be significant. But because it’s a long-established model there are plenty of used bikes around of all ages and mileages, plus a certain amount of unsold new stock, maybe in last year’s colours, available at big discounts.

You don’t need to be an accomplished haggler to get a new SV650 for a decent discount. Dealers also have low-mileage ex-demonstrator bikes around for good prices too. 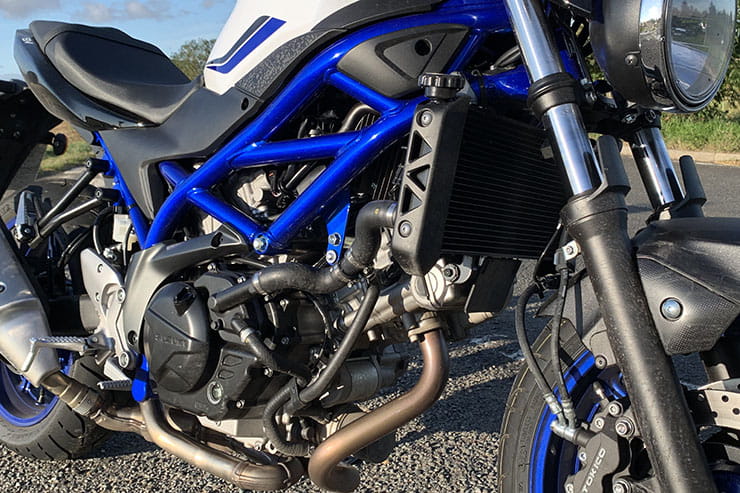 Basically, the same unit as the original, but 20 years’ evolution have made it easier to use, smoother, more economical and cleaner too

The SV650 has always been about ease of use before crazy, headline power figures. 75bhp might not worry your mate’s Yamaha R6, but it arrives at pretty much half the revs of the Yamaha and so is easier to use. On paper the SV’s power, torque and weight figures make it one of those bikes other riders condescendingly describe as ‘good for new riders’, but on the road it just works. More than enough to keep ahead of most traffic and, to put things in context, 75bhp was about as much as Kawasaki’s Z1 superbike made in 1972 and no one described that as ‘a good first bike’.

Suzuki has always been good at fuel injection and the latest version of the SV650 (launched in 2016) delivers predictable, smooth power across the whole rev range, while being even more economical than older models, meeting Euro 4 emissions regulations and making just as much horsepower. Open the throttle as hard as you like in any gear and the SV pulls well enough to make ‘seen-it-all’ road testers smile, without ever feeling frightening or out-of-hand. The clutch is light, gearchanges are slick and forgiving when you get a bit clumsy and the brakes work well enough to overpower the front suspension, without troubling the ABS (most of the time).

Tested in a group with pricier rivals you could pick some faults but ridden in isolation the Suzuki feels like a good-time easy-to-ride motorcycle with few obvious flaws. 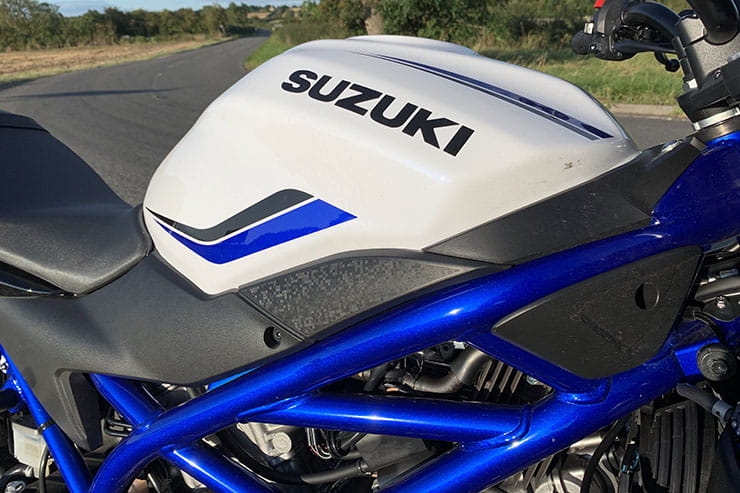 By modern standards the SV feels very light and manageable. The seat is low and narrow enough to give confidence to shorter riders without being cramped for taller ones. I kept thinking that the suspension was the weak point. It does feel softly sprung and a little under-damped, meaning it bounces a bit more than less-budget bikes. On one favourite twisty road it bucked and bounced down most of it, but on the rest of the equally bumpy stretch it was (confusingly) absolutely fine. And to be fair, even on the bouncing bits the SV steers well enough, has a power delivery that doesn’t let it get out of control and still feels like it’s you, the rider who’s in charge.

It’d been a long time since I rode an SV650 and I remembered the very early (carb-equipped) ones having poor low-rpm fuelling which upset the very soft suspension and made cornering less enjoyable than it’s Yamaha Fazer and Honda Hornet rivals. This new one is still softly sprung and could do with more damping control, but the smoother fuelling doesn’t challenge the suspension as much and the revs pick-up much more quickly too. In fairness though, after 20 years’ more practice than the first SV I rode, I’m probably a smoother rider too. 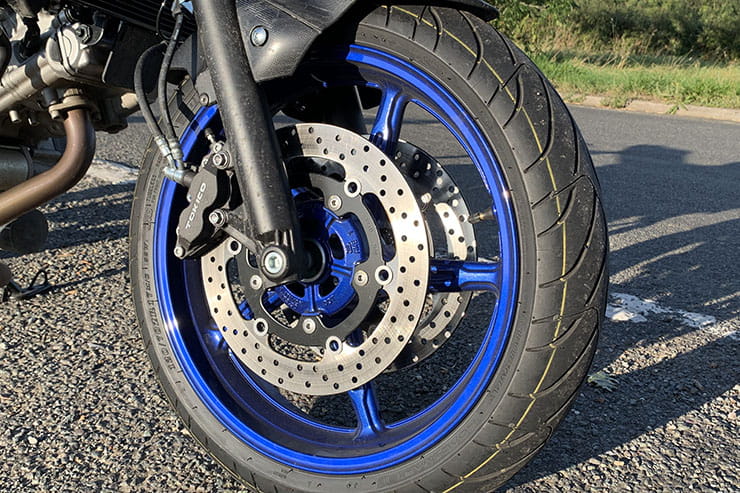 On paper the suspension and brakes are a weak point, but on the road, they work fine for novices and old hands alike

Twin-piston front brakes and rudimentary ABS are powerful enough to stop you sharply when needed, but have plenty of feel too so novice riders can learn how to brake safely.

Riding position is roomy for six-footers and the seat is comfy for 90 minutes, bearable for two hours, but needs a bit of shuffling after that. Long distance comfort is fine at sub-motorway speeds. Above that, without a fairing to keep the windblast off you’ll be knackered after a couple of hours. Pillion provision is ok for short journeys but a bit exposed on the motorway and cramped for two people 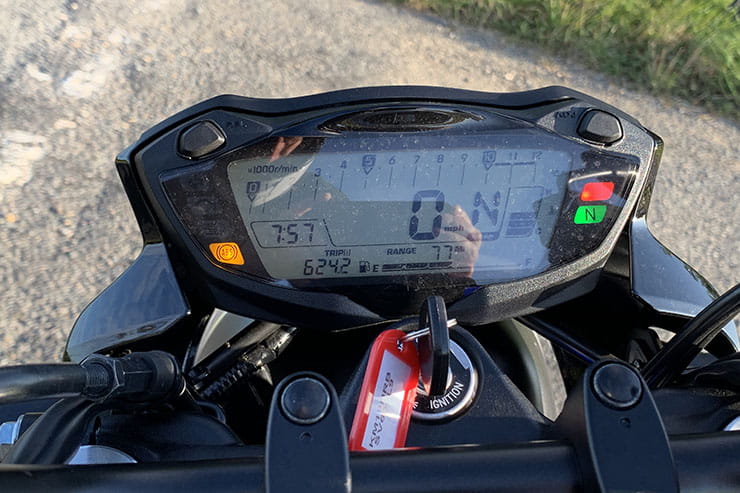 Simple, but comprehensive LCD clocks include fuel range remaining and gear position. There are no riding modes, but the SV doesn’t really need them. The smooth power delivery makes sporty or wet-weather riding equally easy. ABS is effective, but not intrusive. Many softly-suspended bikes have a habit of activating the rear ABS early. The SV doesn’t do this. 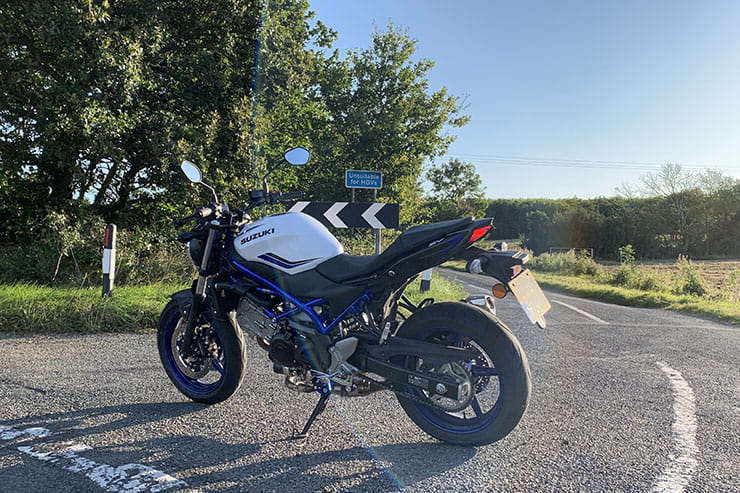 No-frills biking for sensible money. Who could argue with that?

When the BikeSocial team gets nostalgic (about 4.15pm most days) one of the recurring conversations is about technological progress and whether the new bikes on sale today can justify their ever-increasing prices by being that much better than the 20 year-old bikes we keep looking at for £2000 on Bike Trader. It’s an argument that’s hard to answer because all those years and 35,000 miles of weather and wear take their toll on bushes, bearings, cables, brake pistons and suspension units to make even the best-maintained old bike feel woolly and slightly slack.

Suzuki’s SV650 sort-of gives us an answer. Yes, a brand-new version of a bike first seen in 1999 still feels contemporary, is still enjoyable and, with the addition of modern fuel injection, ABS and an additional 5mpg on the older versions, the 2019 SV650 makes a challenging rival to its Yamaha, Kawasaki and Honda competitors.

An SV650 does make a good first big bike, but it also makes a great buy for anyone who’s worked out that the speeds they talk about and the speeds they actually do are getting further apart every year. It’s easy to be blinded by the crazy numbers and specs of the flagship bikes out there and forget that really enjoyable biking can still be affordable. 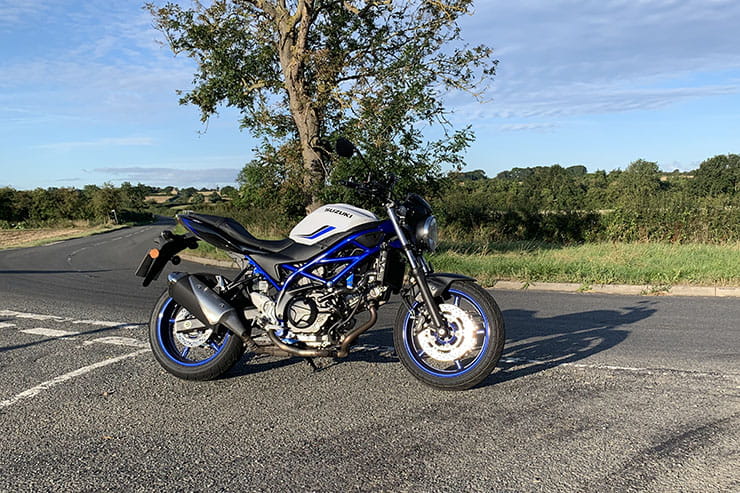