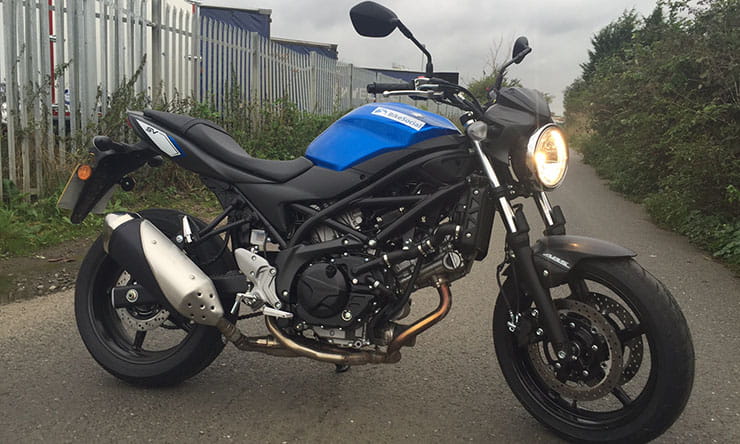 The middleweight sector of the motorcycling market is a crowded place. There are all sorts of offerings in all shapes and sizes for you to consider. You can grab a multi cylinder bike like the Honda CB650F, or a parallel twin from Kawasaki, in the shape of an ER6-n, then there’s cruisers, adventure bikes and various models all around the world. The Suzuki SV650 could easily be overlooked when you realise just how many machines loiter in the 650 corner of the showroom.

Suzuki didn’t help its cause by parking the SV in favour of the Gladius but thankfully, after a few years' absence, the SV650 is back.

Relaunched earlier this year, the SV650 delivers you 75bhp from its 645cc V-twin engine and weighs in at 202kg ready to ride. It’s a real world package and it’s £5,499 is achieved by using pretty basic components, although ABS does come as standard. The lack of parts extends to no grab rail or screen, it’s a total back to basics bike.

Kerb appeal might not tempt you to consider owning one but take a ride and you may well change your mind. 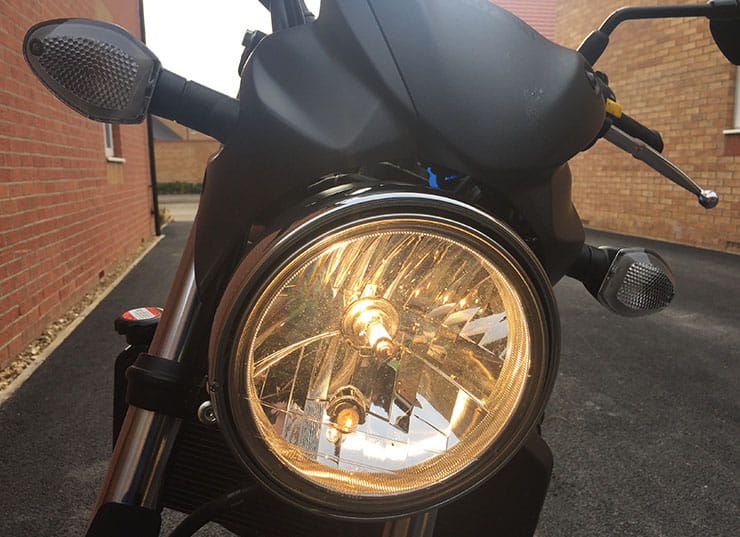 It’s 8am and the wage slaves of Peterborough clog up the parkways in their cars. I have just filled the SV to the brim and head off in the drizzle to see how many miles the little Suzuki can do on three gallons of unleaded.

The first thing that I notice about the SV650 is its sound coming from the silencer, in these days of whisper quiet exhaust systems the SV650 still manages to create its own distinctive note.

The second thing vying for my attention is how nimble the bike is, it’s weight is carried low, the bars are flat and wide which really help you to sneak into the gaps between the traffic when they appear. All that’s in my immediate vision is a digital clock set, there’s all the information I need displayed, from the gear I’m in through to my tank range, there’s even a clock. The display takes a little getting used to, the rev counter is straight from the snake game on an old Nokia mobile phone.

Switchgear is clutter free, there’s no rider aids to fumble about with, the 75bhp needs no traction control nonsense.

Heading north from Peterborough I pick up the A15, it’s a pretty much arrow straight route from Peterborough to Lincoln, there are plenty of curvy bits to sweep through and the SV650 is more than happy to show me how stable it is on the move.

The road surface is a mixture of rutted roads and a contrast of tarmac surfaces, some fresher than others, all glistening under the cover of the morning drizzle that resists passing over.

The SV650 doesn’t come with any fancy dangly bits, the rear shock and forks look just like those on the 1999 SV650 which even back then they weren’t anything fancy.

There’s seven clicks of adjustment on the rear shock if you can be bothered to get on your knees and wrestle with a C spanner, but with zero clicky bits up front it makes you wonder why they bothered. Under hard braking the forks do dive a bit, but nothing too alarming, thankfully the brakes aren’t too spiteful, infact the pair of twin piston calipers are just a tad too casual for my liking.

The engine is a treat, it churns out lovely dollops of poke in a way only a V twin configuration can provide, that cool exhaust note adding to the pleasure. With Lincoln appearing on the horizon I arrived with zero aches and pains, the seat looks a little too small but it delivers big on comfort, which is complimented by the bars and foot rest positions.

I hit Lincoln city centre bang on 9am, it’s gridlocked and the only people going anywhere are on two wheels. I tried to find the Banditmania workshop in Tentercroft Street, the guy who runs it used to dabble with lots of SV650s too, I had wanted to bump into him and pick his brain about the reintroduced version that I am riding, despite my attempts I had no luck in locating him. I lost my sense of direction and ended up on the road to Grimsby, despite still having a healthy fuel range left I changed direction and picked up the A46 back towards to A1 at Newark.

The dual carriageway gave me an opportunity to thrash the SV650 for a good few miles, with no chance of muddy corners like those I experienced on the A15 I spun the pair of pistons up to the redline and let the SV650 have a decent gallop.

The rev limiter cuts in at 10,000 revs, though it’s quite abrupt in doing so.

Picking the A1 up and heading south I was catching a very strong breeze from my righthand side, the gusts were strong enough to push the SV650 from its path, the lack of any weather protection also convinced me to bid the A1 a farewell at Gonersby and instead we zig zagged across country back towards the A15 at Sleaford, this was after a comfort break at the services. The SV had been collecting a fair amount of road grime, a mix of the wet roads and tractor deposits, the front header pipe was getting caked in mud and the lack of a hugger at the back meant things at the rear of the bike were sparkling less than when we’d left earlier this morning.

The SV650 would really benefit from a hugger as standard!

With the handy fuel range counter counting down our miles left in the tank I headed back for Wheels Motorcycles in Peterborough, our scenic ride to Lincoln and back had seen us clock up bang on 170 miles from the 13.8 litres of unleaded I’d invested in its tank earlier, the range gauge suggesting there was another five miles left I dared to use it.

The SV650 managed to shine on a day that was pretty dull, if you are looking for a middleweight bike that is fun to ride and not too expensive, then you definitely need to experience the SV650 before making a final choice.

Noise. The exhaust note is cute.

Looks. It isn’t trying too hard, lack of tawdry add ons is a good thing. 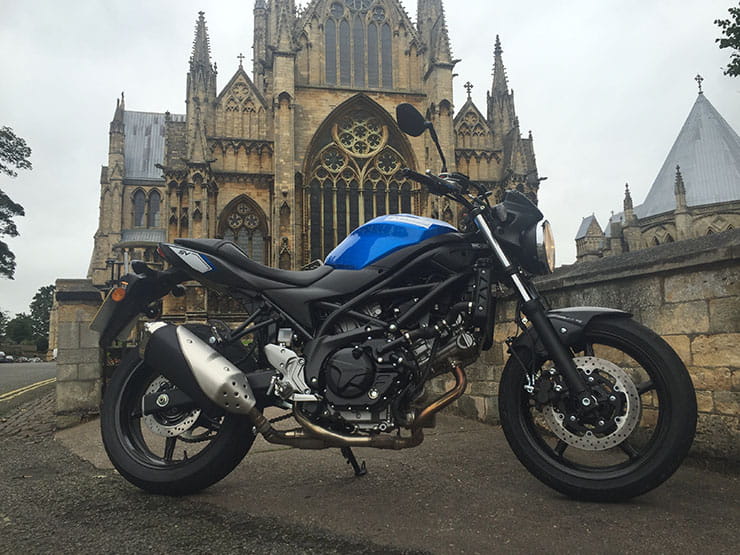