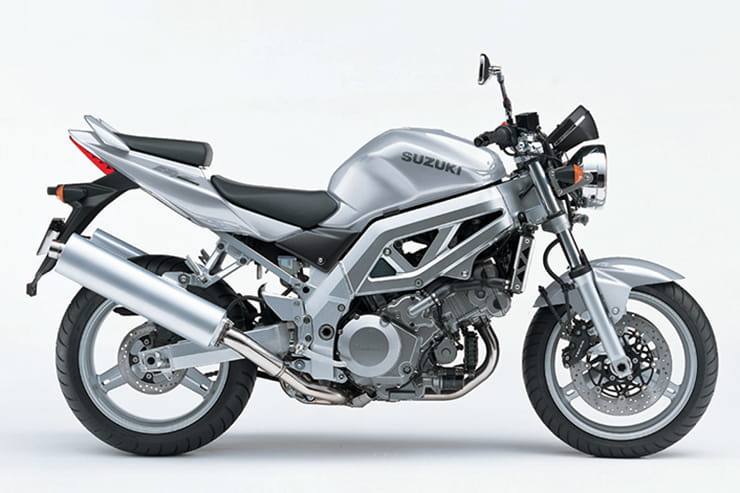 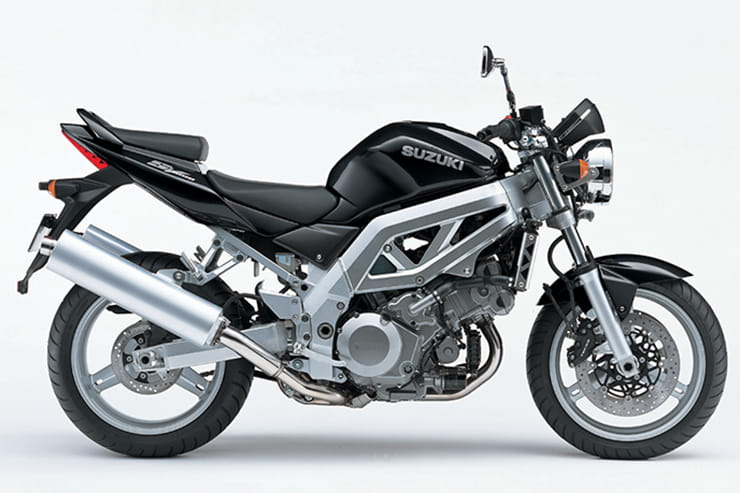 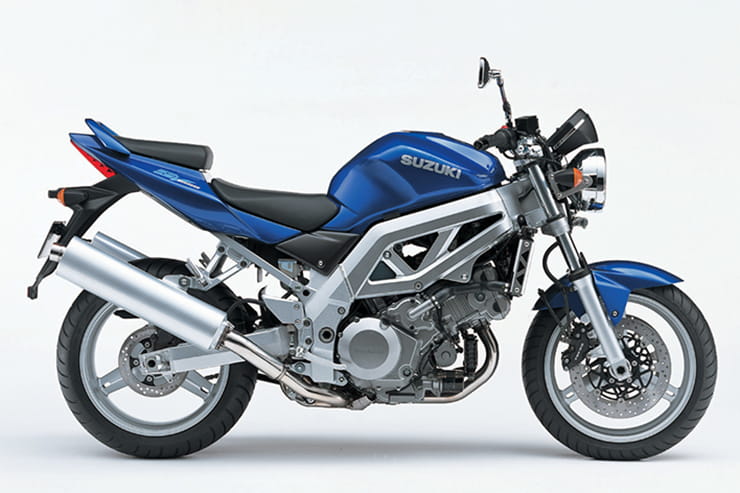 Suzuki don’t have a lot of luck when it comes to their premium big capacity sporty V-twin models and after the disaster of the TL1000S and TL1000R, with an engine going spare they instead looked toward their most successful V-twin for inspiration – the SV650. Surely the thousands of happy owners of this wonderful middleweight would just love to upgrade to a larger capacity version…

Sadly the reality very quickly proved a different story. Even from the outset in 2003 the SV1000 and SV1000S were unpopular and sales never took off for what should, in theory, have been a smash-hit for Suzuki. So what went wrong with the big SV and why should you now be considering owning one?

When they created the big-capacity SV model, Suzuki assumed that owners of the firm’s middleweight would want to upgrade. But this wasn’t the case. Most SV650 owners loved the light weight and easy power offered by the middleweight and felt the 1000 would be intimidating. So, with this group ruled out, Suzuki’s hopes lay with fans of the ill-fated TL-S, who they hoped would want a modern take on this iconic (for generally the wrong reasons) naked V-twin. But with conventional forks, a budget frame and less power than the TL, sadly this group of riders also shunned the SV. The end result was a bike that very few riders were tempted to consider and as a result the SV was a showroom flop. But that was then, is the SV1000 now worth looking out for as a used buy? 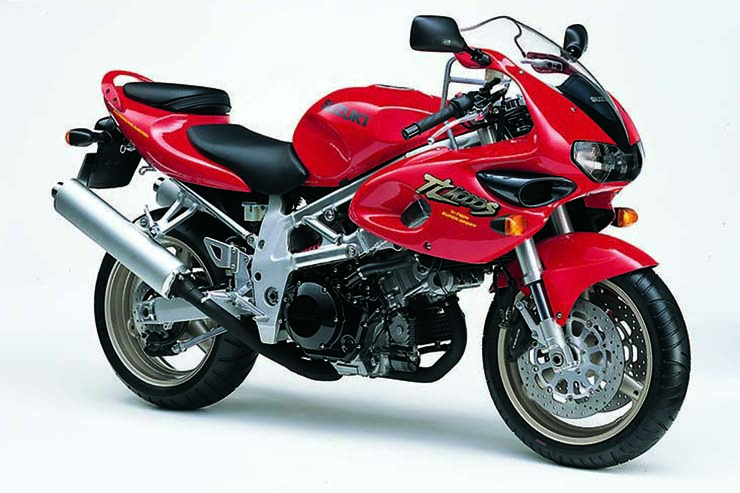 There are two major factors that may tempt you to buy an SV1000 – price and that engine. For starters the SV is a real bargain with a decent one easily snapped up for less than £3,000. Do so and you will fall in love with that thumping V-twin motor that remains packed full of charm with a wicked exhaust note and stacks of grunt. It’s a cracking engine and while not amazingly powerful, is still a million miles away from an inline four in terms of character. Add to this bullet-proof reliability, cheap service costs and it is hard to argue against the SV. Or is it?

The issue with the SV1000 is, and always has been, the fact it feels a bit low rent. Conventional forks, a budget frame, minimal plastics and a look that is identical to a cheap middleweight does nothing for its kerb appeal. A lot of owners pimp up their SV1000 (mainly the naked bike) and get some great results, but you are always dressing up a sheep in wolf’s clothing. And while the SV1000S has a half-fairing, in truth it isn’t a very good sports tourer and isn’t brilliant at commuting either.

So should you consider an SV1000? Ironically, due to the fact that middleweights have grown in capacity in recent years, the SV1000 is now appealing to the very riders Suzuki hoped it would in the first place – fans of the SV650. As the SV has stuck at 650cc where its rivals have expanded to nearly 900cc, the SV1000 now seems a sensible step up rather than an intimidating beast. When you look at its price tag, and the fact V-twins are fairly rare beasts nowadays, owning an SV1000 certainly has its appeal. 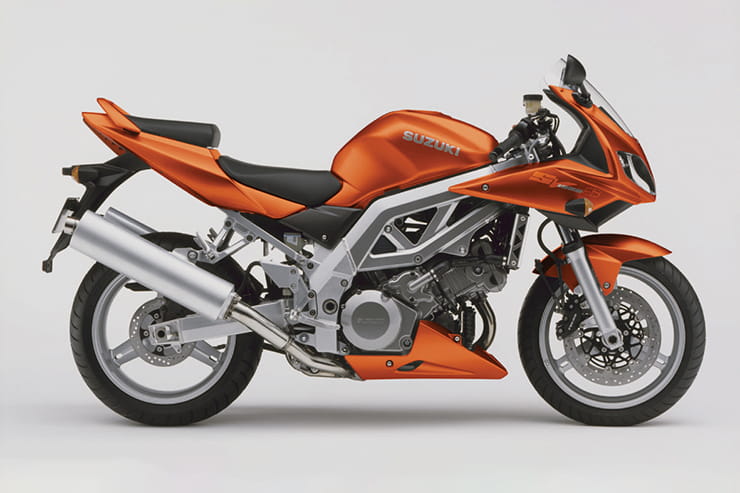 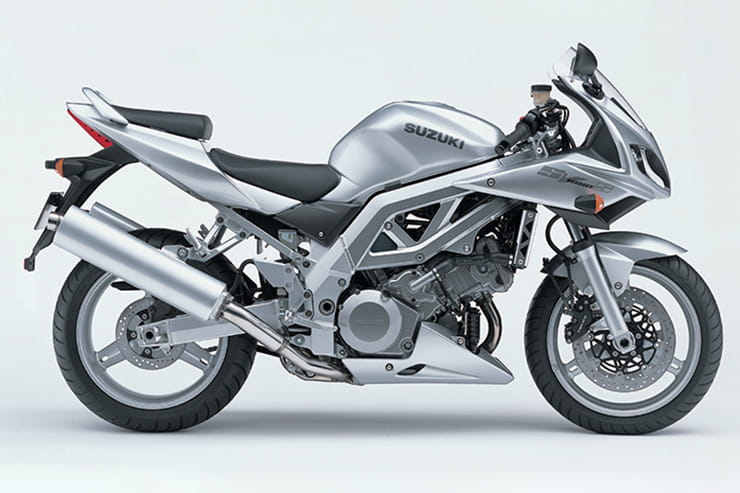 Somewhat unsurprisingly considering it is a fairly tried and tested unit, the SV’s engine is nice and solid. While having its roots in the TL-S engine, Suzuki actually made 300 changes to the SV’s engine in an effort to increase reliability and as a result the clutch is more robust, the fuel injection system improved and the gearbox also stronger. However it isn’t perfect…

One major, and quiet odd, fault with the SV1000 are the magnets on the stator, which can work loose. It’s a very strange issue that is fairly unique to the SV, however a quick internet search soon reveals that forums are awash with pictures of the fault and suggested fixes. Generally, if the battery starts to go flat, assume the magnets are working loose and break out some glue to fix them back in place (look on forums for guides)! If you are lucky they won’t have caused any damage, but there are incidents of some fairly substantial resulting electrical woes…

Big V-twins can run lumpy when their throttle bodies aren’t balanced and owners report that this makes a huge difference to how an SV1000 feels on the initial part of the throttle opening. If the bike is a bit of a pig at low speed, assume it needs a service and its throttle bodies nicely balanced. That said, always be wary of any fault codes or warning lights on the dash as a lumpy running bike can also be due to a cam-position sensor failing. The good news is that the unit costs less than £40 new (used ones are £15-£25) and is a reasonably easy item to swap. There are occasional reports of coils and HT leads failing, but these are fairly rare, and clutch slave cylinders can also spring a leak alongside the left-hand crankcase’s O-ring.

The SV1000 more than the SV1000S tends to attract those who like to modify their bike and you can fit a variety of other Suzuki parts onto an SV. One very popular mod is to slot in a shock from a GSX-R K3 (a ZX-6R shock also fits), but when you factor in altering its spring rate and damping to suit the SV, you are better off buying a quality aftermarket item that is build specifically for your weight. Watch out for bikes with aftermarket bars fitted and ensure that the brake and throttle control lines aren’t compromised when the forks are fully extended and the bike is put on full lock.

Finally it is the old enemy for Suzuki budget models – finish. A lot of forum users are fairly unhappy with the SV1000’s level of finish and corroded fasteners, rusty discs and paint flaking off the fork legs are the main gripes. It is built to a price, and compromises have to me made somewhere… 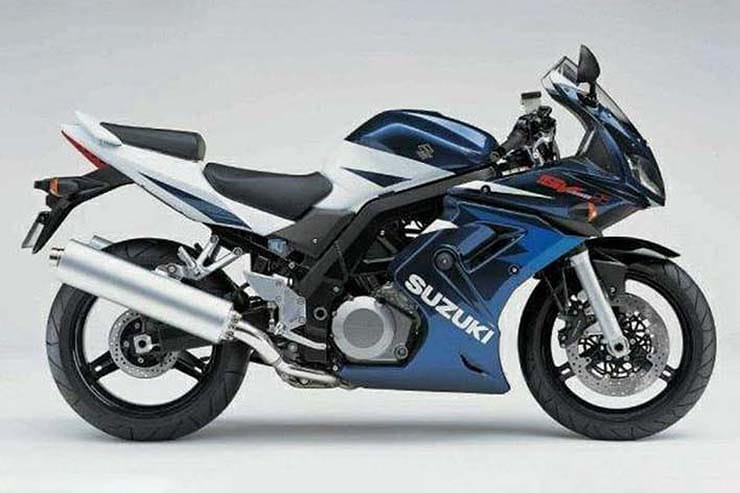 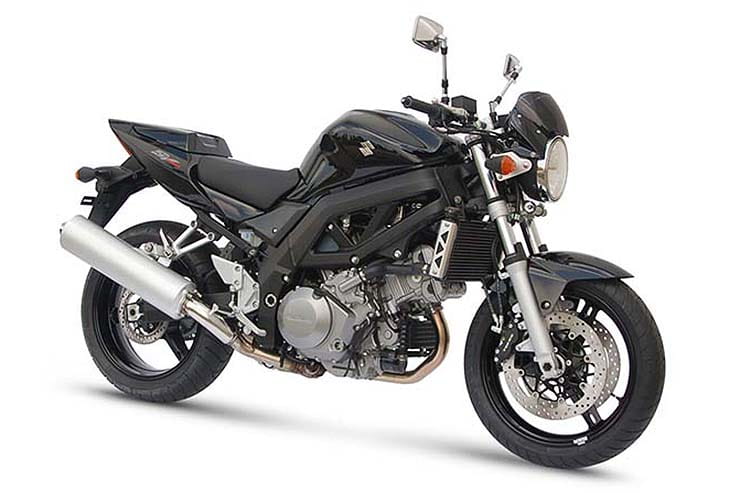 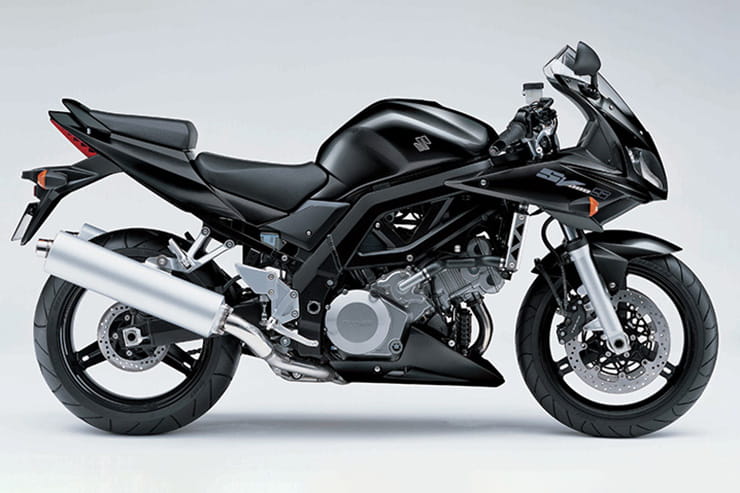 At a quick glance, the first and last SV1000 models look fairly similar, so you would be forgiven for thinking that it wasn’t updated – however this isn’t the case. After its 2003 launch, the 2004 SV1000 and SV1000S were subtly modified with a new swingarm that was slightly longer alongside an aluminium subframe and lower footpegs. This was kept fairly quiet by Suzuki, so you need to break out a magnet to see if the bike has a steel or aluminium subframe. Far more obvious is the 2005/06 update, which saw both models gain a black painted frame and swingarm as well as a modified engine that featured higher compression, larger throttle bodies and a lighter flywheel to boost mid-range. To improve the SVs’ handling, the suspension was also tweaked to add some extra support through revised damping rates. While not technically updates, a few ‘special’ models were released as sales slumped towards the end of its life. There was a ‘café racer’ naked bike and a fully faired SV1000S, which was just the stock bike with an official Suzuki aftermarket accessory fairing added. The 2005 SV1000SZ was released to celebrate the 20th year of the GSX-R brand and came with a black frame, full fairing carrying a GSX-R-style paint scheme and slightly re-tuned engine with 5bhp extra. 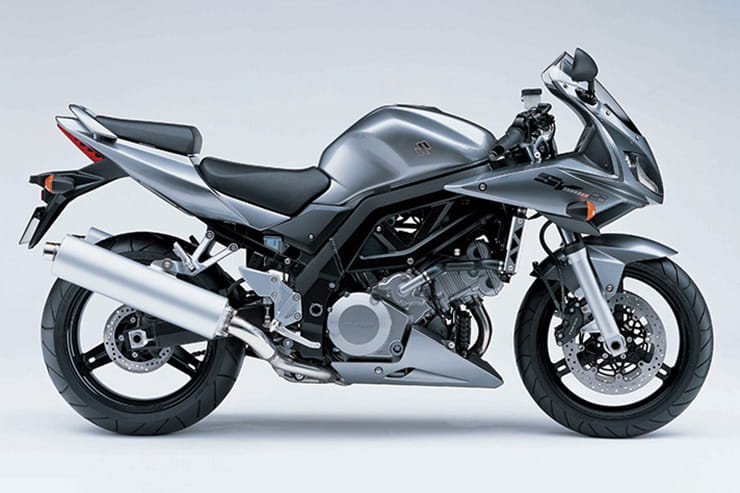 Both SV1000 models were targeted at price-conscious buyers and as a result of a low RRP, used prices are also remarkably affordable. You can pick up an early SV1000 for in the region of £2,000 and it won’t have covered that drastic mileage with mid-20,000s fairly common. That’s great value for money. Up your budget to £3,500 and you can get a lovely machine with an absolute beauty costing less than £4,500 from a dealer. The S is a little more plentiful in the used market than the naked bike, which means it is even cheaper. An early model can be snapped up for less than £2,000, but due to its fairing mileages tend to be higher so over 30,000 is common. Ideally, aim to spend between £2,200 and £2,500 and you will get a tidy lower mileage early example. If you have £3,000-£3,500 you can get a very tidy example with £4,000 the realistic ceiling figure for a minter. 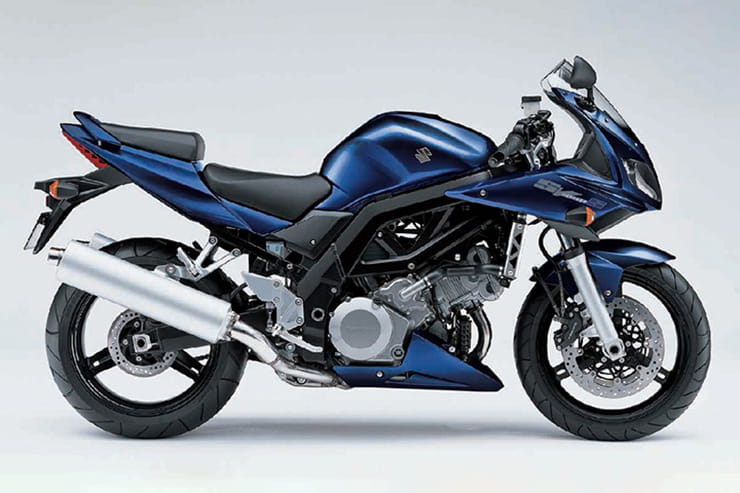 The UK’s foremost expert on anything TL or SV-related is James Holland at JHS Racing in Bristol. Big-bores, tuning, servicing, he knows everything you need to know about the SV1000 and can be contacted at www.jhsracing.co.uk When it comes to owners’ clubs or forums, head to either www.sv-portal.com, which is an excellent source of information, www.svrider.com, which is better for modification tips, or www.tlzone.net, which caters for the SV alongside the TL.