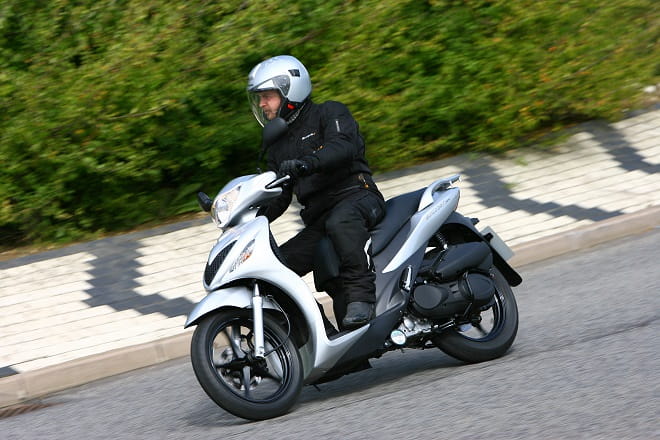 We've never been fans of big-wheel scoots here in the UK, and to be honest I'm not exactly sure why. Take the good bits of  a 'traditional' scooter: step-through frame, weather protection, automatic transmission, storage; bolt on some big wheels for motorcycle-like stability and handling and you've got the best of both worlds, but we're still not keen on them.

Maybe it's because they occupy that strange middle ground between bike and scooter; an area we've never been too enthusiastic about exploring. Or perhaps it's because they're popular with our European cousins; we've always been a bit reluctant to take direction from over the Channel.

Whatever the reason we must be missing out on something. Spend time in any European city and you'll see dozens of them.

A few of those might be Suzuki's Sixteen (so called because of the 16-inch wheels). 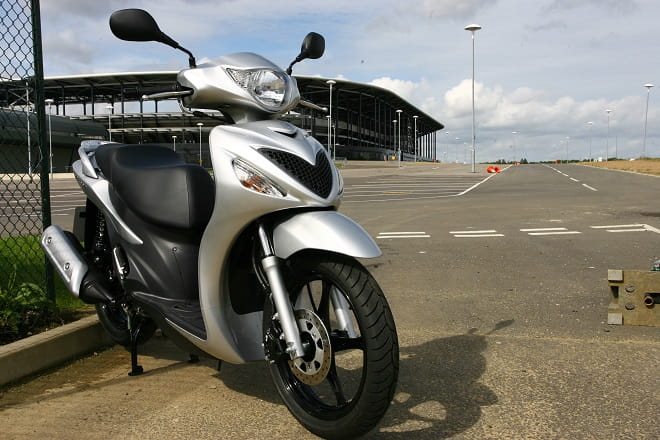 Its powered by a fuel injected, 124cc, SOHC, liquid-cooled, four stroke single cylinder motor, complete with integrated Idle Speed Control. Suzuki say it's been set up to maximise efficiency and ease of use in the city, with easy stop start performance and efficiency at low speeds. Emissions are kept to a minimum with a catalyser and fuel injection, as is fuel consumption. It averages around 60-70mpg (100mpg+ is achievable, if ridden accordingly). Combined with the 8.5 litre tank capacity, trips to the pumps should be kept to a minimum.

Drive is transferred through the usual fully automatic CVT and centrifugal clutch, and keeping the whole set up cool is a compact radiator which Suzuki say is also tailored for use in stop start city conditions, offering maximum cooling despite its compact size.

Cooling was certainly no issue on the test ride, nor were there any notable issues with performance. The Sixteen picks up well from a standstill, the motor pulling healthily up to a comfortable cruising speed of around 55-60mph, and soldiering on – albeit with a little hesitation – to just shy of an indicated 70mph flat out. As you'd expect, once up to the higher reaches of the engine's performance response does fall a bit flat, but keep the Sixteen in its natural urban habitat and it isn't an issue. There's more than enough poke to deal with city traffic and keep up on short stretches of open road or dual carriageway, should the need arise. 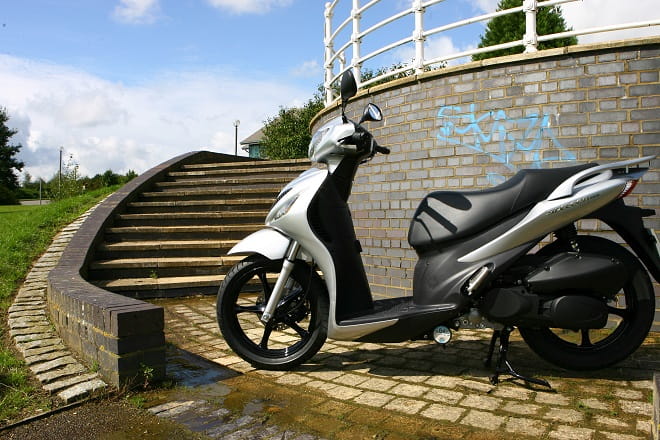 Even when reaching the engine's limit, the Sixteen's chassis shows no signs of chucking in the towel. It's a fairly basic set-up; tubular steel frame, telescopic front forks and a swingarm, monoshock rear, but the steering is light and the whole show is stable, nimble and responsive enough for the hustle and bustle of city traffic. It copes with rough surfaces well and remains stable enough on faster stretches too. Those aluminum cast, five spoke 16 inch wheels bring a great deal of confidence and feel to the Sixteen's road manner, turning well and remaining solid over rough patched and white lines.

Braking is taken care of by a single disc, twin caliper at the front and a single disc, single caliper rear. There's plenty of stopping power and control on offer from both ends and they're linked, giving added balance and confidence for nervous hands.

Nervous feet are also catered for with a low and slim seat – 800mm – and cutaways in the foot board to ensure contact with the ground. As with many big-wheel scoots, leg room is fairly limited. The foot board, although plenty wide enough, is a little shallow and restricts foot movement a bit. It shouldn't really be an issue though, given that the Sixteen is designed for the short hop across town.

Pillions are catered for very well; there's plenty of room on the large stepped seat, two chunky grab rails to cling onto and proper rubber covered, fold out foot pegs.

Elsewhere, it's fairly standard scooter stuff. The dash is clear, well laid-out and includes analogue speedo, fuel and temperature gauges, a digital clock, the usual array of warning lights and an oil change light to keep the rider in-line with servicing requirements. 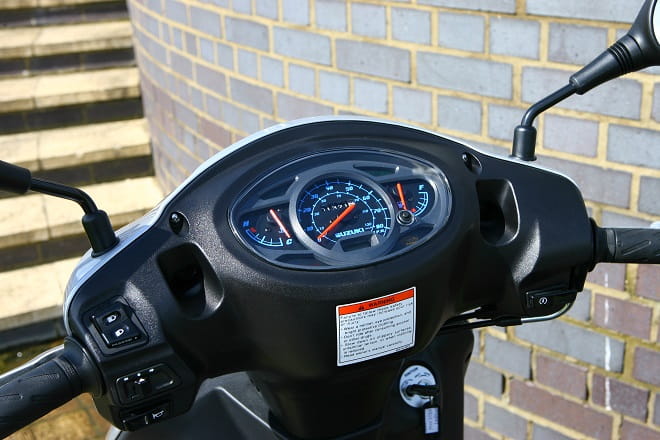 Hand controls and switches are as you'd expect; easy to operate and fall to hand and finger easily. A neat touch are the viewing windows cut in the head set which give a quick and easy view of brake fluid levels.

There are also two storage compartments, one small glove box in the leg shields and the usual under seat bay too – small is the operative word here though, the glove box has room for... well, a pair of gloves and not much else, and the under seat bay struggles with all but the smallest of lids. Nevertheless, there's room for waterproofs and a few bits and bobs, plus the Sixteen comes with a luggage rack as standard. 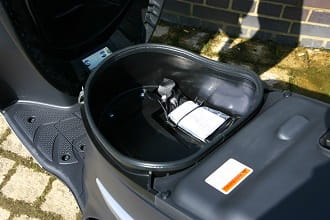 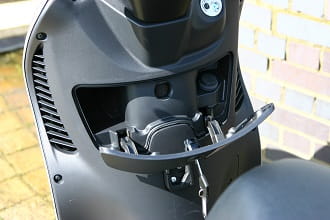 The real winner for me though, is the styling. Quite often big wheelers look quirky at best, but not so the Sixteen. Sleek sporty lines, GSX-R-esque touches throughout, and those funky black wheels do the job well, and might just help tempt a few people away from the small wheel offerings. I don't think they'll be disappointed...