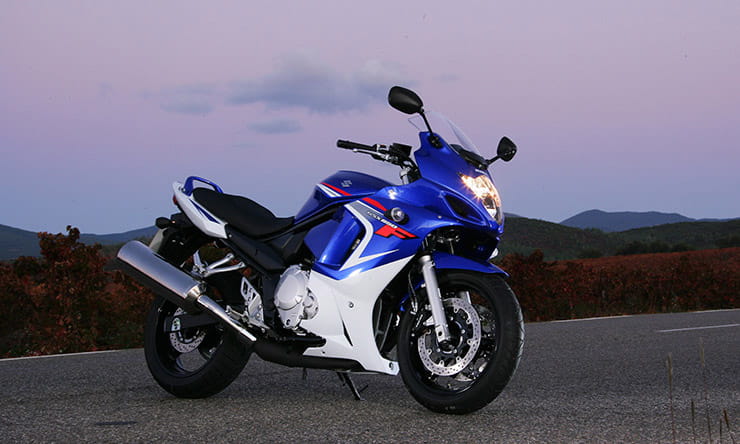 Billed by Suzuki as a sporty all-rounder, the GSX650F is essentially a tarted-up Bandit 650 using parts from existing Suzuki models to give it a bit more of a sporting look. Sold on its budget price more than its outright performance, the GSX650F is a good, solid performer that does have more than a visual hint of the GSX-R about it, but costs considerably less to both run and insure. An unassuming workhorse of a bike and very cheap two-wheeled motoring. 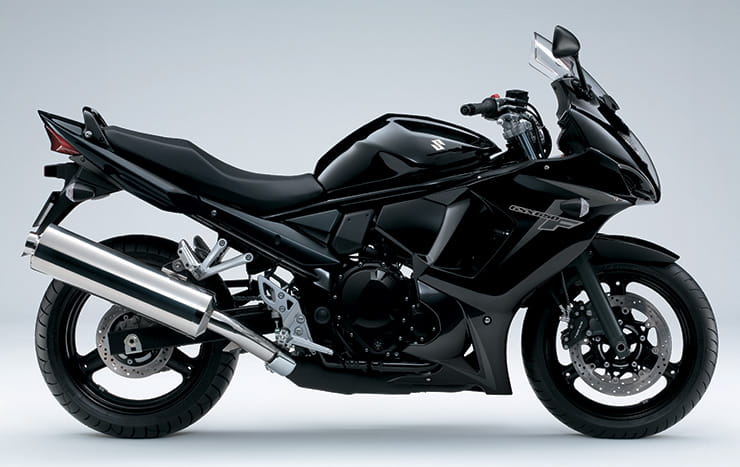 The GSX650F uses the same water-cooled engine as the Bandit 650. Introduced in 2007, the 656cc motor replaced the old air/oil-cooled lump and brought with it improved fuel economy and a broader spread of power. Running a DOHC with four-valves per cylinder, the engine has Suzuki Composites Electrochemical Material (SCEM) cylinder plating to reduce friction and improved heat transfer as well as a six-speed gearbox. Fed through a digital fuel injection system that has been tweaked for a bit more sporty feeling when compared to the Bandit, the motor runs Suzuki Dual Throttle Valve (SDTV) technology, which uses computer-operated secondary throttle valves to maintain optimum combustion efficiency and also runs an Idle Speed Control (ISC) to improve cold starting. After Euro3 killed off the older air/oil-cooled Bandit motor, the water-cooled one has a Pulsed-secondary AIR-injection (PAIR) system, which injects fresh air into the exhaust ports to help ignite unburnt hydrocarbons and reduce carbon monoxide emissions. Suzuki claimed the GSX650F made 83.5bhp with 45.35ftlb of torque while delivering 54mpg.

Again, the GSX650F and Bandit 650 share an identical double-cradle tubular steel chassis. Built with a budget in mind, Suzuki also ensured the GSX’s chassis would be sporty but not over the top and armed it with a 26-degree rake and 108mm of trail. However what most owners appreciated more was the fact it has a low 790mm seat height and the seat is a single units and not split like most sportsbikes, improving its comfort levels for both the rider and pillion. The full fairing is unique to the GSX and is not simply a Bandit’s aftermarket unit while the headlight is taken from the Suzuki GSX-R1000 K5, giving the GSX a pleasingly sporty face. The 19-litre fuel tank will also put a big smile on commuter’s faces. 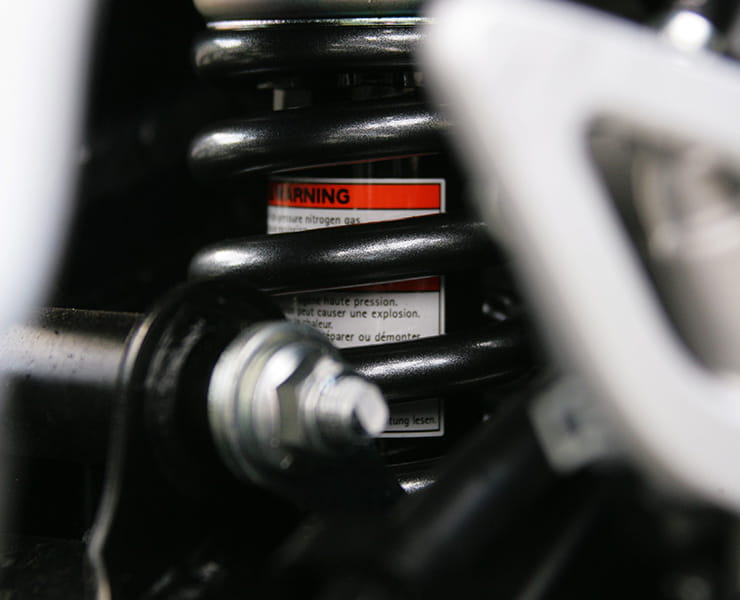 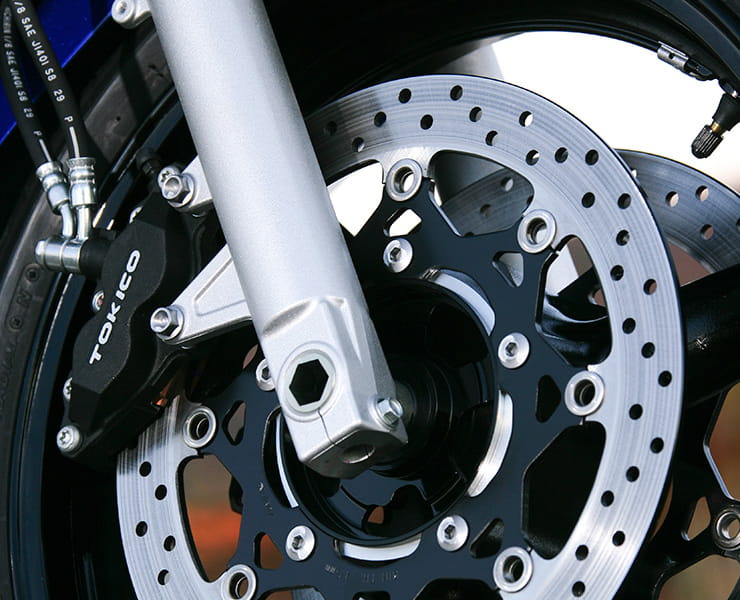 With budget at the forefront of the GSX’s design brief, and the fact it runs conventional forks, you can’t expect too much in terms of braking bling. The Tokico calipers are conventionally-mounted but are four-piston units and grip 310mm discs while the rear brake is a single-piston unit with a 240mm disc. ABS features on the GSX650FA model, which cost a £300 premium over the stock GSX650F. 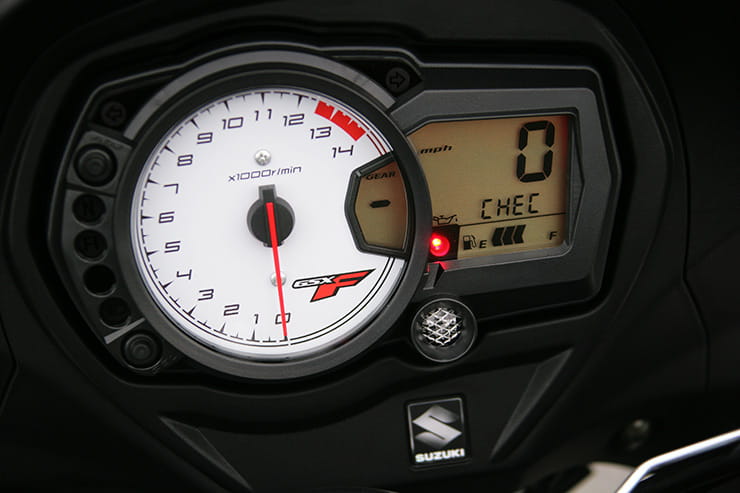 While lacking anything other than ABS on the A model, the GSX650F does get a rather flash dash (taken from the GSX-R models) that has a gear indicator, LCD speedo, fuel gauge, clock, dual trips, reserve trip and programmable shift light. 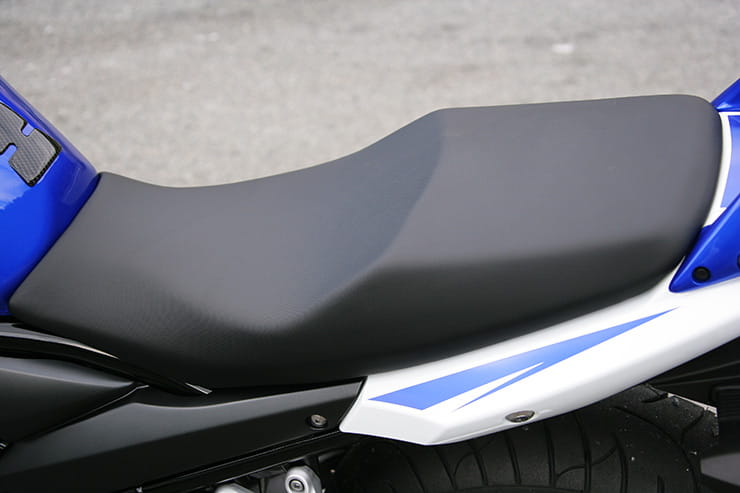 Essentially a Bandit with a fairing, the GSX650F gets tall bars rather than clip-ons, which is a great move as it suits this budget all-rounder’s role in life perfectly. Very comfortable while on the go, although the screen is a little short for maximum wind deflection (there are loads of taller aftermarket items out there) when it comes to hacking through traffic or churning out motorway miles, the GSX650F’s comfort levels are excellent.

The GSX650F is a fun pillion bike with a good, solid grab rail included as standard and a very comfortable seat. The engine’s lack of power does mean you will be shifting gears quite a lot, but as long as you are adept at not bashing heads on every cog change it’s a pleasant machine for two-up weekends away or blasts. Just remember to up the shock’s preload as the Suzuki’s suspension is pretty soft and squishy as standard and the weight of a pillion really makes the back end sink. 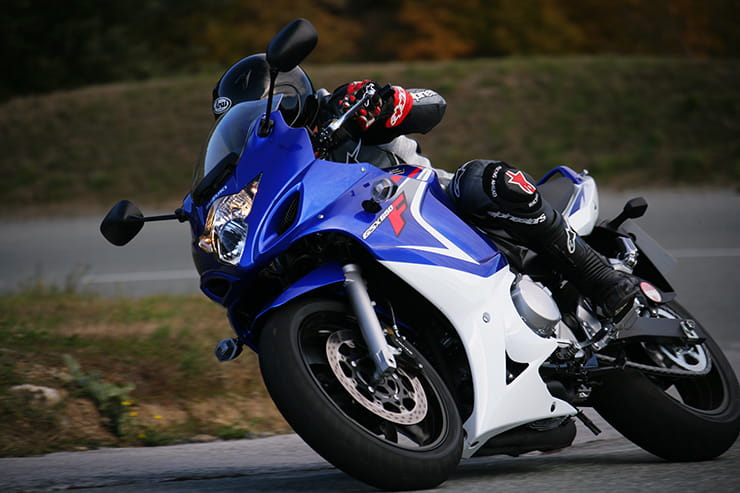 Quite simply, Suzuki’s GSX650F is one of the most underrated and often forgotten about bikes on the market. And this is extremely puzzling because its price tag is amazingly cheap for what the GSX really is: a practical all-rounder that performs without fuss or thrills, but simply does what a motorcycle should do – put a smile on your face going from A to B.
The engine is as solid and reliable as Big Ben. It’s as happy to crawl along in traffic as it is to sit at motorway speeds. The gearbox is Suzuki through and through by being slightly notchy at first and then wearing to be positive and easy to shift up or down the six-speed gearbox.
Performance-wise, it is friendly rather than intimidating. The GSX650F is happy to be ridden slow or fast and that is a good thing when making the next step from passing provisional licence requirements. It is also very adept at being ridden fast through the twists or commuting to and from work.
The full-length fairing does ok at protection from the elements, but is mainly there to reduce windblast to the body, which it does very well. Rider position is likeable from the off due to the upright bars and flat, supportive seat with low-placed footpegs that are set to give a natural seating stance. The pegs are prone to touch down…
Steering is neutral and the budget-priced suspension can get a little floaty when covering ground at speed, especially over today’s bump-strewn routes we laughingly call roads. But there are no major handling surprises to appear and upset the fun.
Bennetts Bike Social Review, October 2012.

The GSX650F is what it is and as such you can’t expect too much from it. This is a machine that will cost you very little to buy and for this reason it does have its limitations. When it comes to riding position and general comfort levels there is little to moan about, however comfort doesn’t cost and it is in the areas that require investment that the GSX650F is left lacking. The suspension is very soft and squishy, which while good for the commute or dealing with potholes, delivers a bit of a wobbly ride when out on the faster corners. And although the inline four engine is pleasingly smooth and fairly torque-laden for a 600 (ok, 650) it isn’t the fastest and if you want to get motoring it does need to be revved. Finish-wise, well it’s a budget Suzuki model, what more can we say… 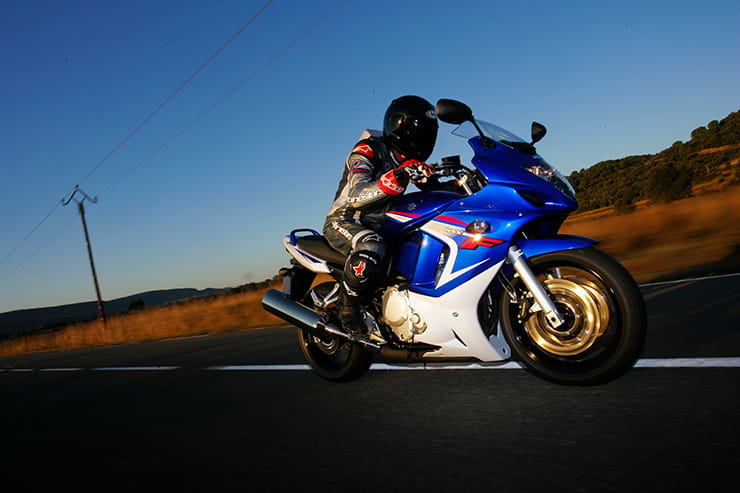 Top of your list should always be build quality and the level of finish. It’s not a case of is there corrosion, it is how much corrosion is there and how badly has it marked the bike. Areas such as the exposed nuts and bolts (the rear axel nut corrodes terribly) all surfer very badly and these can be used as a gauge to how careful the previous owner was wit the anti-corrosion spray. Give all the fairing fasteners a very close inspection for chewed heads as they seize in place and also look for any cracks around their mounting lugs. The exhaust likes to rot through under the engine, so check for any leaks, and also inspect the frame for any signs of rust, especially around the headstock area. The GSX’s budget suspension doesn’t last long, so look for leaks around the fork seals and also test to see of the shock’s preload adjuster still moves as it often seizes in place. Engine-wise the GSX is solid, there are a few cases of reg/recs failing, but these aren’t that common and are an easy fix. As commuters favour this kind of bike, electrical add-ons such as heated grips or an alarm are common so always inspect the quality of the work and ensure that any wires don’t interfere with the bike’s steering. If the bike refuses to start, the chances are that the kill-switch on the clutch lever has either failed or slipped out of its mounting, which is an easy fix.

The GSX650F was never updated, however it was sold alongside an ‘FA’ model that added ABS to the standard bike.

There are a few sub-£2000 GSX650Fs out there for sale, but these are often Cat-D write-offs and are best avoided, as are the £2000 high-mileage hacks. With £2500 in your pocket you can pick up a relatively low mileage early bike (sub-20,000) in a private sale while if you want a later model you will need to push your budget up to £3000.Very tidy bikes change hands for just under £4000, which isn’t bad value however you would expect such a plentiful and budget bike to be a touch less. 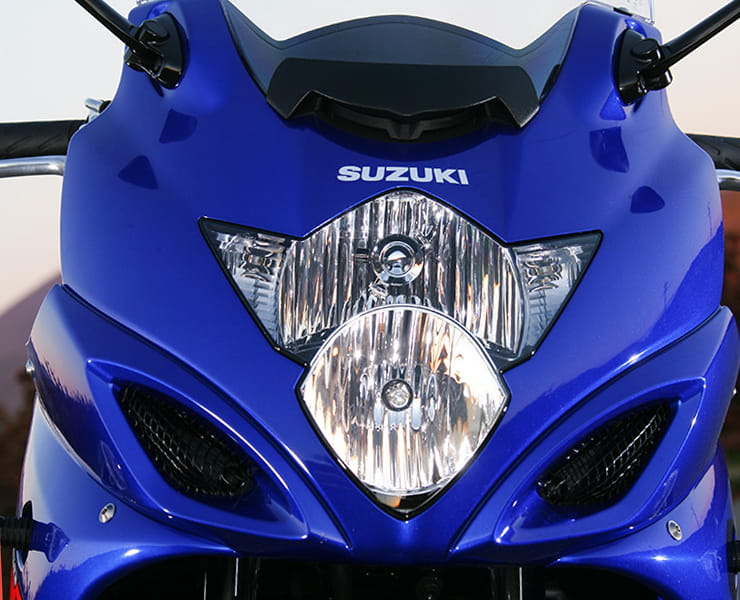