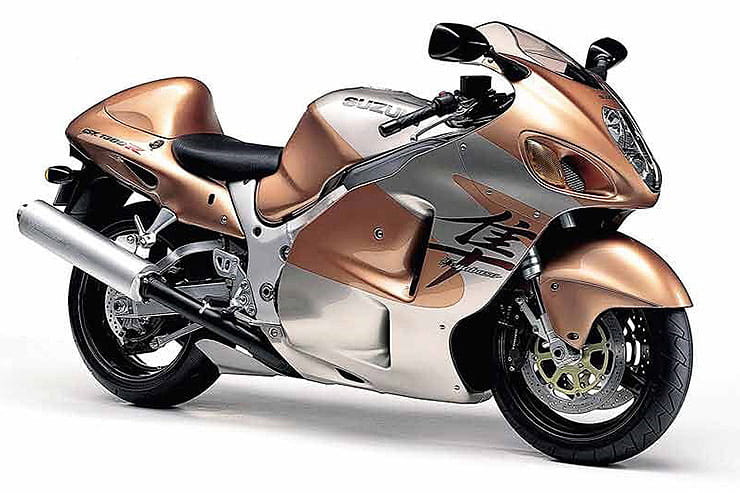 The original Suzuki GSX1300R Hayabusa was truly a game-changing motorcycle. Designed with one purpose in mind - to prove that Suzuki could build the fastest production motorcycle on the planet – the Hayabusa was so well engineered that not only did it more than achieve its goal in life, it forced rules to be rewritten and remained essentially unchanged for eight years as no one could hold a candle to it in terms of performance, reputation or sheer street presence. Very few bikes can claim to have created the kind of impact on the two-wheeled world that the Hayabusa has. Like them or loath them, there is no denying that this incredible machine has stamped its place in the history of performance motorcycles. And best of all, a bike that can smash out 180mph with consummate ease could be sat in your garage for less than £3500!

There a few people asking silly prices for first generation Hayabusa models by calling them ‘future classics’ but in truth the Busa hasn’t really hit that status. If you can get a very tidy totally original first generation (ideally in the silver/beige/gold/tea stain/pretty repulsive colours) then most certainly hang onto it as it may well increase in value but most Busas tend to get used rather than stored and polished and that means prices are quite low. At the bottom of the price bracket are machines costing £3000 in a private sale or £3500 in a dealership. These will usually have mid-20,000 miles on their clocks and a few extras such as aftermarket pipes. Up your budget to around the £4000 mark and you can get a tidier bike showing sub-20,000 miles while a very late 2007 model with a low mileage will be £5500. Aim to spend in the £4000 region and get a tidy bike that has covered just under 20,000 miles. 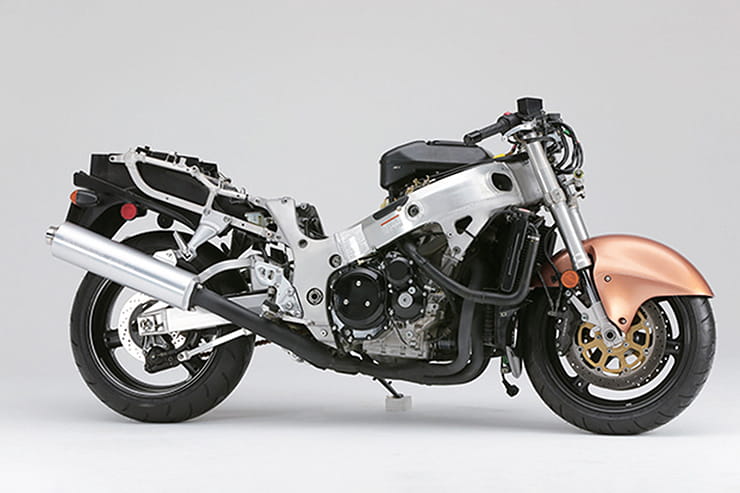 Power doesn’t date and the original Hayabusa’s engine remains an incredibly impressive piece of four-stroke engineering. With a claimed 175bhp it has a lot of power but it is the torque that will leave you staggered as the 102lb-ft of thrust is delivered in a seemingly unending wave that makes the bike drive forward like nothing else. Any revs, any gear, the Hayabusa will take off like a scalded cat when you open the throttle and that’s what draws so many owners to this amazing machine.

Despite all its power the Hayabusa’s engine has a very good reputation for reliability, mainly because there is simply no way you can even scratch the surface of what it is capable of on the UK’s roads! Living in this under-stressed way means you can buy with fairly high confidence that there are no major issues lurking away behind the scenes and aside from the occasional cam chain tensioner needing replacing and maybe a generator packing up that’s about it. At 15,000 miles the valve clearances require checking but owners report that they seldom need any kind of alteration until possibly 30,000 miles, generally even more. If there is a rattle from the top end, assume they need a tweak. There are a few reports of gearbox issues (the gearbox was updated in 2001), but again this is very rare, and clutch wear is also something to keep an eye out for. In general if it starts, runs without smoking and has no worrying rattles you will be safe. A lot of owners swap the heavy OE exhaust end cans for something a bit sportier, which does improve the bike’s handling but could lead to problems on very early models. Back in the early 2000s there was a spate of ‘cracked subframes’ on the Busa, which Suzuki attributed to owners removing the OE exhausts which they said were an integral part of the subframe structure so always check this area on a used bike. In retrospect this was a bit of a suspect statement by Suzuki, especially as in 2002 they fitted a stronger steel subframe... This wasn’t the only update the Busa received as in 2001 a 186mph restrictor was fitted and the 220mph reading removed from the speedo while 2002 also saw an ECU update, more cats fitted in the exhaust and minor clutch mods. Although a few more tweaks were done such as clear indicator lenses in 2005, 2002 was the Busa’s last update worth mentioning as the rest were very minor. 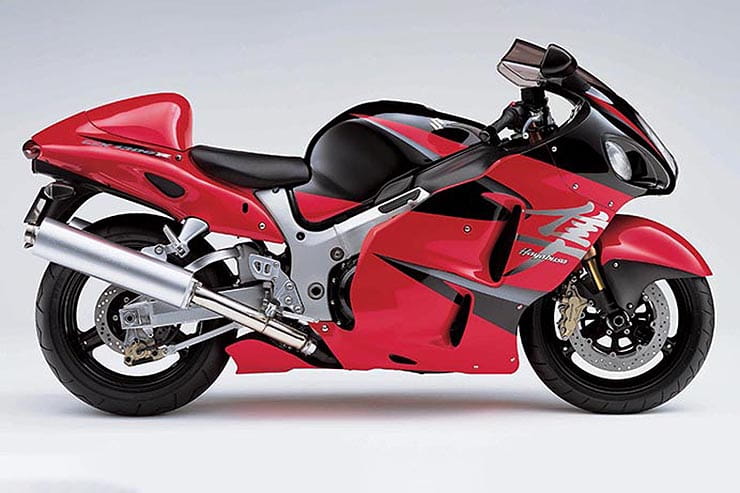 The Busa isn’t a very thirsty bike as you generally ride using a fraction of the throttle’s available movement! Mpg figures in the low 40s are easily achievable and if you take it very gentle this can be stretched into the mid 50s or even 60s, which means a tank range of over 200 miles is possible. The big expense on Busas used to be rear tyres, however the latest generation of dual compound (or even more) rubber has seen this vastly improved and you can easily get 4000 miles from a rear with 6000 miles certainly possible.

Long and low, the Busa is built for stability at speed rather than agility in the bends. Absolutely rock-solid in a straight line at any speed, the payoff is that in tight bends the Busa can feel quite a heavy old bus and does take some effort to get it aimed at an apex. It’s not a bad handling bike, it is just a bit ponderous. Stick to fast and flowing A-roads and the Busa will feel right at home. The fully-adjustable suspension is actually very high quality with the forks especially impressive, meaning that a re-valve of the front end and an aftermarket shock (the OE unit will probably be nearing the end of its life) can have extremely impressive results in terms of the ride quality and is a great investment.

In a word – lacking! The Hayabusa’s six-piston calipers are well known for their poor performance and as well as lacking enough bite for a machine that has so much power, they are also very prone to seized pistons. A lot of owners update the master cylinder (Brembo radial units are popular) and then fit braided steel lines to increase the calipers’ power and high friction pads, which is a good solution, while some go further and swap the whole caliper. Ideally, go down the Brembo route and if the clutch is too heavy for you, look at also updating the clutch master cylinder as well to reduce the lever effort. When buying used, ensure the discs have enough thickness left, the pistons aren’t seized and the discs themselves aren’t warped. 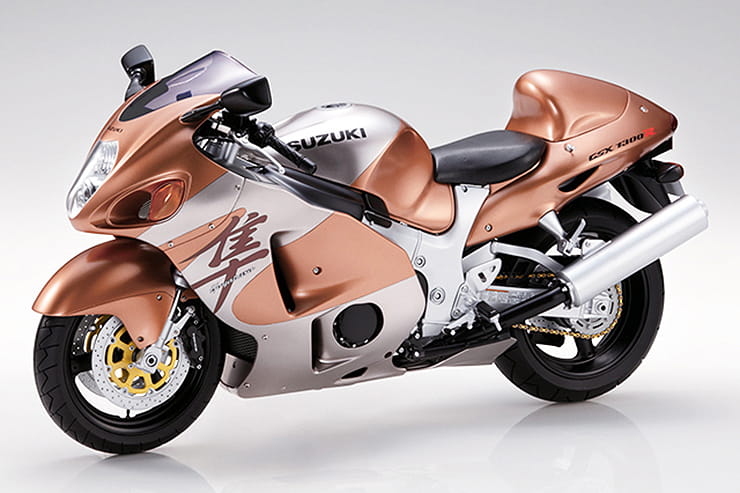 The Busa is more a sports tourer than a tourer and with its low screen and clip-on bars it isn’t very comfortable over distance. But that doesn’t mean it can’t be made better and a lot of owners fit bar risers and a taller screen, which makes a huge difference to the bike’s comfort levels, especially if you also update the seat to a gel option. Busas actually make good sports tourers and can happily destroy long motorway miles on a European tour – especially if you happen to throw in a few unrestricted Autobahns along the way...

This generation of Busa has no rider assists, which is all part of its raw charm. A lot of owners add a TRE (Timing Retard Eliminator) to remove the top-speed and power restrictions, which is probably worth doing if you want to get the full rush of acceleration. Aftermarket exhausts, screens, higher friction brake pads and even the occasional paint job (be wary as this might mean the bike has been crashed) also pops up on used bikes.

Owning a Hayabusa requires not only an incredible amount of restraint but also being realistic about what you want to do on it. If you enjoy B-road riding then it isn’t for you, however if you ride smooth A-roads and want effortless acceleration, mind-bending power and to be on a bike with a proper badass reputation and the ability to hit 180mph (on a closed road), for £4000 there are no better options.

Three things we love about the 'Busa… 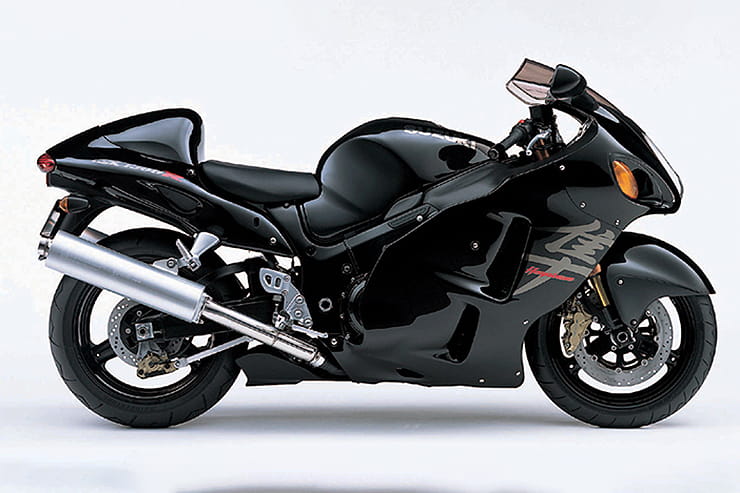