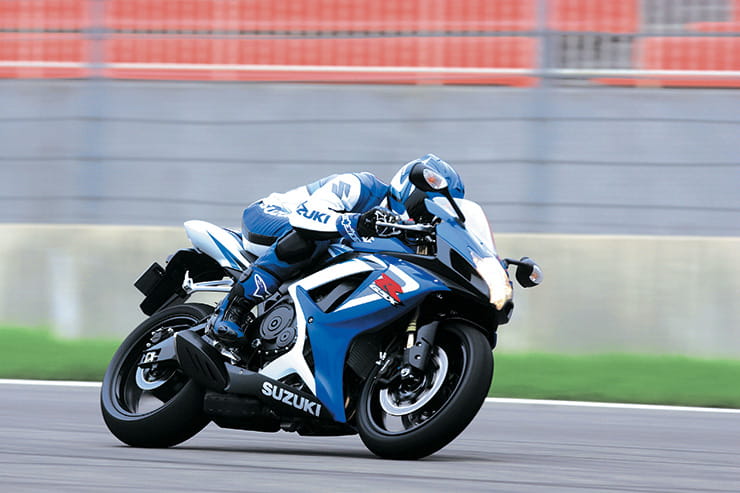 Having celebrated the GSX-R750’s 20th anniversary the year previously, and with the litre bike class now well and truly established, most assumed that Suzuki would gracefully retire its legendary 750 at the end of 2005. However as the bike is held in such high esteem within the factory this wasn’t the case and alongside the GSX-R600, the GSX-R750 was thoroughly updated for 2006 with a new motor and chassis, allowing the legend to live on to fight another day. If you want a beautifully balanced road sportsbike, the GSX-R750 is bang on the money in more ways than one…

The GSX-R600 and GSX-R750 share an almost identical engine, however where the 600 runs a 67mm x 42.5mm bore and stroke to give it 599cc, the 750 has 70mm x 48.1mm to increase its capacity to 750cc. An all-new ‘over square motor’ for 2006 with a bigger bore and shorter stroke than before, the inline four is actually 32mm shorter top to bottom than before as well as 16mm narrower side to side thanks to a stacked gearbox and complete internal redesign. There is a new secondary balancer shaft in front of the crank to reduce vibrations at high speed and a slipper clutch (taken from the GSX-R1000 K5) as standard. As well as being considerably more compact than before, the GSX-R750’s engine also weighs 1kg less than the outgoing model’s motor, features titanium valves with a narrower valve angle and makes a claimed 147bhp with 63.7lbft of torque. 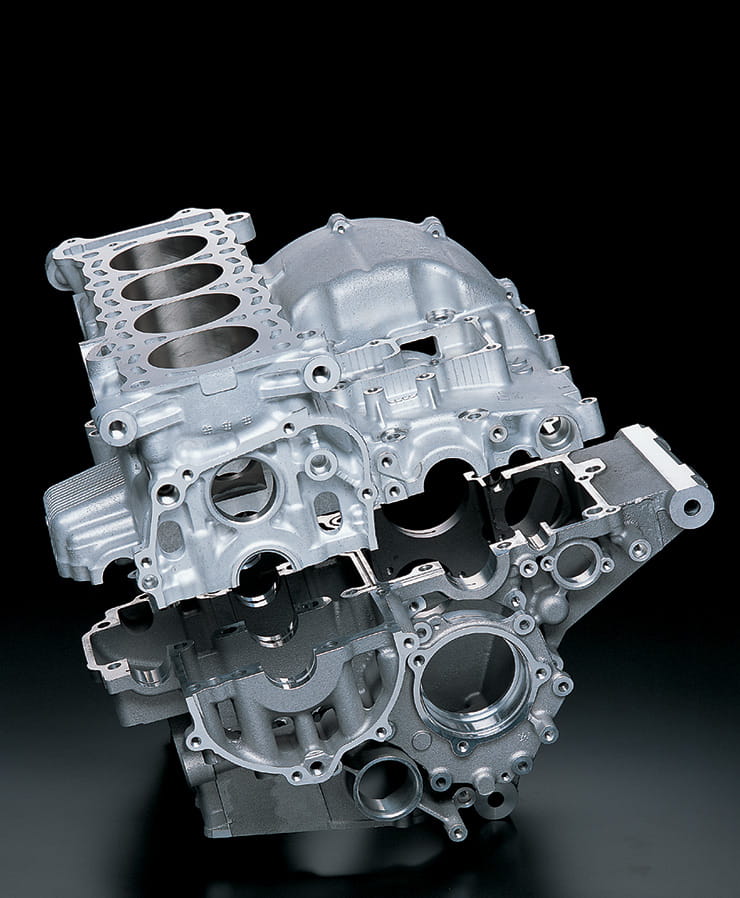 Thanks to the compactness of the new motor, Suzuki could concentrate on making the new GSX-R750 even more agile while ensuring it didn’t sacrifice grip or become unstable at speed. The bike’s centre of gravity is lower and closer to the front of the bike thanks to the combination of the new under-slung exhaust and a repositioning of the motor within the all-new chassis while the swingarm is 35mm longer than before for enhanced rear end grip. The swingarm’s pivot point is also repositioned and the shock redesigned. Overall, the GSX-R750 K6 is 15mm shorter than the previous model while the seat height is 15mm lower at 810mm.

While the new 41mm forks are 2mm narrower than the K5’s, Suzuki claimed they were actually just as rigid and the reduced surface area made them more effective thanks to less friction at the seals, something that was helped by the 750’s TiN coating, something the 600 lacked. The new shock features both high and low speed compression damping for the first time and both the forks and shock are fully-adjustable.

Another update for 2006 saw 10mm larger front brake discs (310mm compared to the previous 300mm) with radial Tokico calipers and a radial master cylinder. The rear has a single-piston caliper and 220mm disc.

The K6 doesn’t get much in the way of electronics (power modes arrived with the K8) but there is a gear indicator and a rev warning light in the dash while the ignition has an immobilisor as standard. 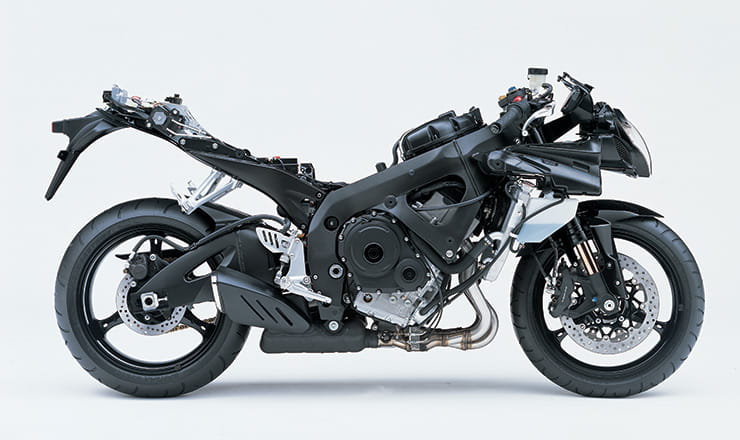 The GSX-R750’s riding position is supersport-derived and as such is slightly compact, however it is far roomier than some of its rivals such as the YZF-R6. Suzuki gave the bike adjustable footpegs as standard, so you can reposition the pegs to one of three locations with 14mm of horizontal and vertical angle to make the bike less cramped, which is a neat touch. As a road bike, it’s one of the more comfortable supersports bikes.

Well, it’s effectively a big-bore supersport bike, so you can’t really expect too much in the way of creature comforts. No pillion grab rail, not much seat to sit on and overall, not much fun as a result… 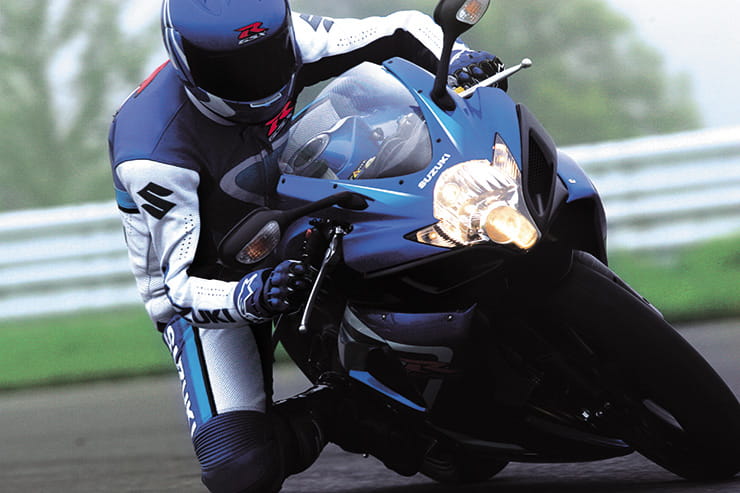 The biggest issue that riders had in 2006 was accepting the GSX-R750 for what it was, rather than trying to categorise it. Put simply, it was the only real 750 and if you wanted a supersport bike that was a bit less rev-happy, the GSX-R750 was ideal. And better than that, it only cost £1000 more than the 600. However there was an issue…

As good as the 750 was, and most tests agreed that it was a brilliant road bike and excellent on track, Yamaha had moved the game on when it came to the supersport class with the launch of the radical 2006 YZF-R6. As well as looking amazing, the R6 came with a ride-by-wire throttle, cutting-edge chassis and suspension and a banshee of an engine that really appealed to thrash-happy supersport nutters the world over. It was the ‘must-have’ supersport bike of the year and while the GSX-R750 sold almost

as many units as the GSX-R600, and both actually outsold the R6 in the UK, some serious discounting by Suzuki to shift stock was a major factor in its chart success.

There is something that remains incredibly appealing about a GSX-R750 and if you are after a supersport bike without the hassles of having to rev the nuts off its engine, buy a GSX-R750. The old adage ‘handling of a 600, useable power of a litre bike’ really does ring true and the GSX-R750 is a beautiful bike to ride with a near perfect balance of power and agility for the UK’s roads. While it lacks the ultimate thrust of a modern litre bike, the 750 can be enjoyed at legal speeds (or near legal) without the feeling that the bike is chuckling at your pathetic efforts, which is an impression it is hard to shake on a modern sportsbike. And if trackdays aren’t your thing, but you fancy giving them a go, the GSX-R750 is the absolutely ideal tool for track novices as its linear power delivery is fast enough to ensure you don’t feel like you are lagging behind, but still controllable and manageable so that you aren’t left wishing for the latest cutting-edge electronic assists. Overall, it’s a beautiful balance of power and agility and a bike that just hits all the right notes. 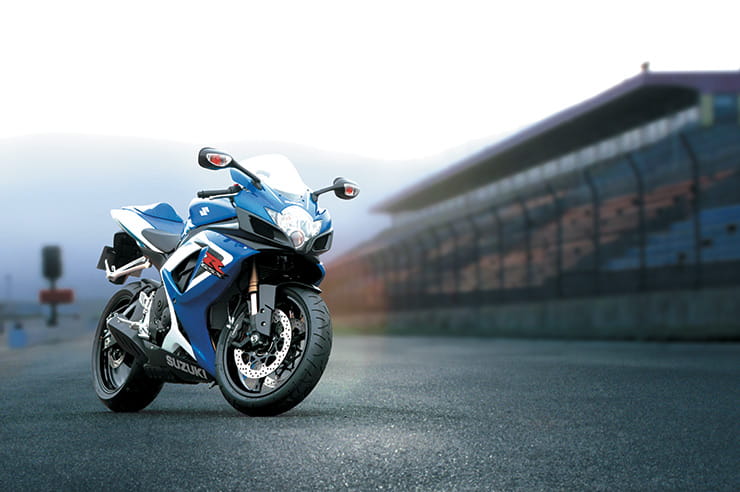 It’s a Suzuki, so the first gripe is build quality with owners always moaning about the overall level of finish. It’s the small details that let the GSX-R down and the paint finish on the wheels is poor, the fasteners round or seize in place and the exposed metal areas do corrode a bit too easily. If the bike looks well cared for, buy it and treat it to lots of anti-corrosion spray to keep it that way.

On the electrical front, watch out for any warning lights on the dash. Should the previous owner have replaced the exhaust for a race item, the Fi warning light may be illuminated, which is annoying. However this also lights up when the Throttle Position Sensor (TPS) fails, which is very common due to a weak spring and is a bit of a pain to get replaced as it is buried deep within the bike. A warning light could also indicate the exhaust valve is suck, which again is often a pain to fix. If there is no light, it is always worth just double checking the exhaust valve opens and shuts and the bike ticks over nicely as a broken TPS can make it lumpy at tickover.

The GSX-R750 (and 600) K6/7 is included in Suzuki’s massive worldwide recall for ‘spongy’ front brake issues. Ensure this recall has been completed as fully functioning front brakes are quite useful and check for warped discs as they do tend to overheat when on track. A couple of owners complain about cam chain issues, but these are relatively infrequent, and be aware that gearboxes can be weak, so be cautious of any bikes with quickshifters fitted.

Overall, the main issue you have with a GSX-R750 is down to owner neglect. Watch out for crash-damaged bikes, poorly fitted aftermarket extras (and hideous blue screens..) and a general lack of care and attention that this excellent bike deserves. 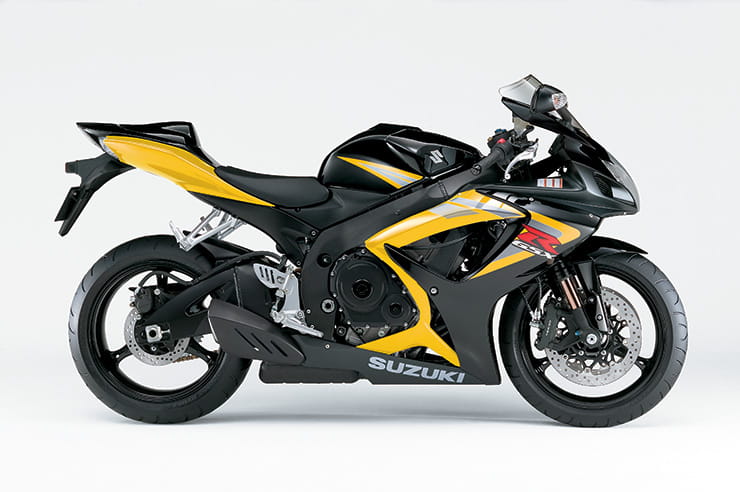 The K6/7 was updated in 2008, but in truth it was a fairly small upgrade in an attempt to keep the bike competitive. Both the GSX-R750 and GSX-R600 received small engine tweaks, a modified fuel-injection system, a face lift, new three-spoke wheels, a 5mm shorter wheelbase, high and low speed compression damping on the forks and variable power modes. The final update before the GSX-R750 was discontinued in 2018 happened in 2011, when the motor was refreshed, Brembo brakes and Showa BPF forks added and the look sharpened up. 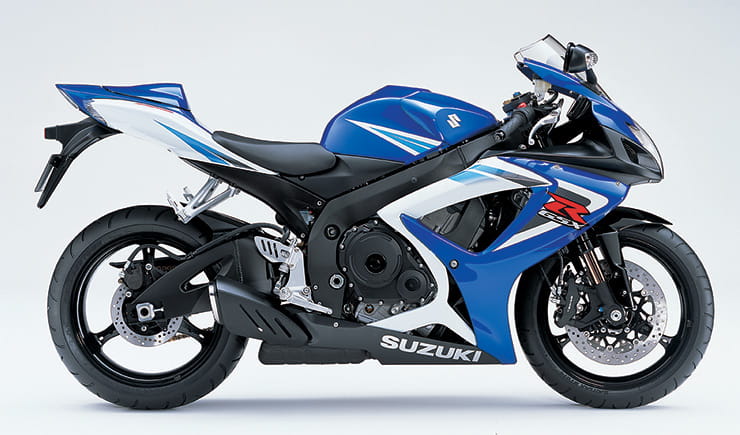