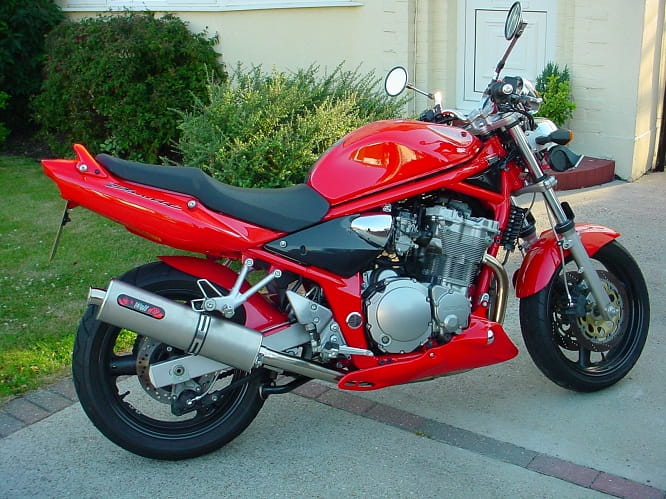 Surprising as it is, the Suzuki Bandit family has been around since the late 1980s, but in the UK at least, we became big fans of this budget bike in 1995.

That was when the GSF600 Bandit was released, helping light a fire under the budget naked middleweight class started just a few years before with the Yamaha XJ600 Diversion.

Like the Divvy, the Bandit used a tried and tested powerplant – the motor derived from the oil/air-cooled GSX-R750 mill, found in the GSX600F sports 600, notoriously known as the ‘Teapot’ on account of its all-enveloped fairing.

Chassis parts are often thought of as being below-par, but they were actually shared with the-then top Suzuki sports-touring middleweight the RF600. Sure, it was still a bit soft and only adjustable at the rear for rebound and preload – but it worked well. The motor was unstressed and good for 75bhp and a top-end of 120mph+, while the painted steel tubular cradle almost aped the aluminium double cradle of the earlier GSX-Rs. With that sort of family reputation, it is little wonder they called it ‘Bandit.’

With its amazing knack of offering a total more than the mere sum of its parts, the Bandit sold incredibly well – the £3999 price tag helped. What also helped was the lower gearing to give some low-down oomph and the excellent ergonomics and geometry which gave it real agility out on the swooping country roads or in the urban sprawl.

The GSF600N was joined by the 600S in 1996 – thanks to the addition of a half fairing and both versions vied with big brother 1200 Bandits and the FireBlade as Britain’s best-selling bike of the 1990s.

Since then age has perhaps not been kind to the Bandit. Newer models complemented it in the Suzuki range (such as the SV650) and rivals such as the Fazer 600 and Honda Hornet provided more thrills and/or looks for similar wedge. Worse, the ravages of a few UK winters often had some of the cycle parts of the Suzuki rusting, so a well-looked after Bandit soon became hard to find. By the time the bike had a thorough revamp, with a new, straight frame, longer wheelbase and a host of other changes in 2000 it had really lost its edge.

Today the double-cradle early models of 1995-96 are possibly in the waiting room for ‘modern classic’ status, which means the prices are still low, but some chancers (dealers) will stick a £1500 tag on a bike with plenty of surface patina. Dig deep and find a tidy privately owned one that’s been looked after. 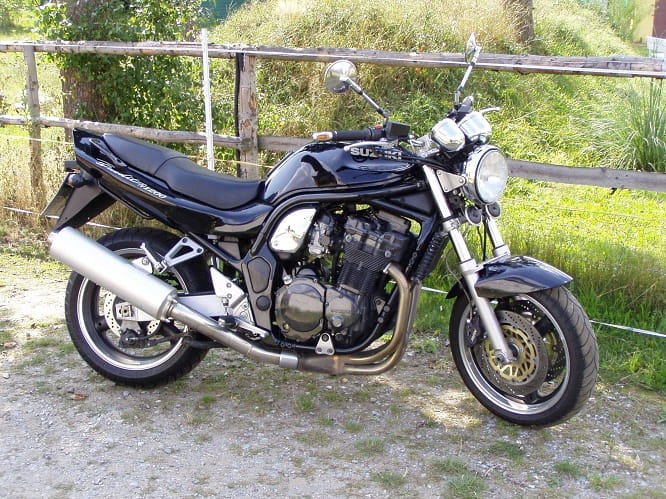 WHAT TO LOOK OUT FOR

STARTING/RUNNING ISSUES: Bandit carbs  (32mm Mikunis on pre 2000 machines and 32mm Keihins on 2000-on machines) can suffer from neglect and are prone to gumming up if the bike has been left standing for a while. Carb icing can also be a problem. Some bikes have reportedly suffered from what seems like fuel starvation – but in reality it can be a breather/fuel cap issue. If the bike cuts out, pull over and open the filler cap – any hissing and that’s the problem.

EXHAUSTS: Many will be rotten by now or rotting away. Any weld area tends to go first and where the end can and downpipes meet. Any bolt on the exhaust should be replaced with a better stainless version as these furr up quickly and can be hard to subsequently remove. Some places offer to weld-up the older pipes. When this becomes a classic, it’s the pipes people will be chasing.

IT’S A WRITE OFF: The first generation Bandits could be written off by a low-speed spill, thanks to the exhaust bracket on the right-hand side being part of the frame.

FINISH QUALITY: This is the main area of concern to owners. Paint can look tired pretty quickly and is on the thin side – as it is on the wheels.The frame was painted the same colour as the bike and the welds can corrode. Engine finish can also be an issue with the early original bikes looking tired pretty quickly. With many Bandits being first ‘big bikes’ often they are hammered, crashed, neglected or a mix of all three. Finding a well-looked after one can be difficult. Also head bearings can suffer if a bike is left outside in all weathers, as can swingarm bearings.

BRAKES: Sliding twin-piston calipers were not brilliant even back in the mid 1990s and these suffer from neglect so regular stripping and cleaning is essential – the pins in the calipers are particularly rust-prone. Improvements should be made with softer compound pads and braided lines.

FRONT SUSPENSION: Soft like the rear so the biggest improvement you can make is heavier oil and springs. Hagon springs cost around £70 and improve things no end add also 20WT fork oil and you’ll feel the difference.

REAR SUSPENSION: Probably needing replacement by now, known as being soft even from new: budget for a minimum of £300 for a low-spec Hagon or Nitron unit that will be infinitely better than the standard unit. From 1999 Bandit shocks came with preload and rebound adjustment.

ACCESSORIES: If we had a quid for every Bandit we’ve seen with a twin-headlamp conversion, we’d sort the deficit before the Tories. With exhausts rotting, you’ll find this is the biggest change to standard, often without any mods to the carbs. Then bikini fairings on the N models, small indicators and consumable changes such as pads, chains, sprockets and brake lines. Some owners will go the route of fender-extenders which keep the crud off the motor. These are the bikes you want to buy as the owners are sensible and probably give the machine more TLC!

For: With bikes available from 1995-on, there are plenty out there. Price isn’t an issue either…

Against: …but finish and finding a nice one will be. Kinda lost their edge and image with the passage of time, too.