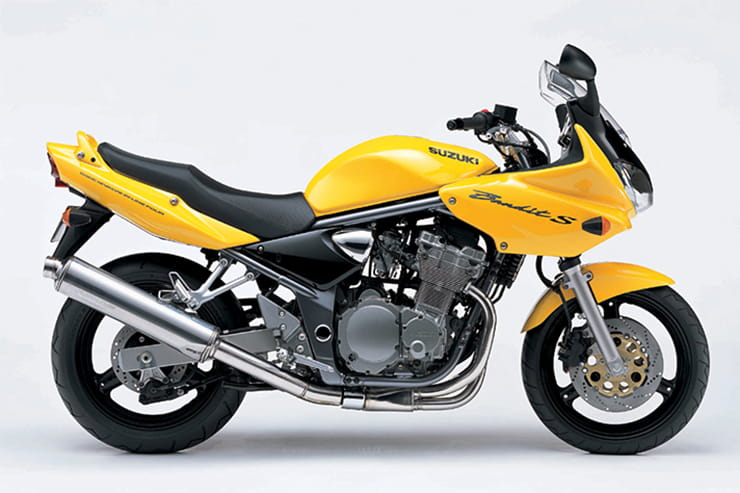 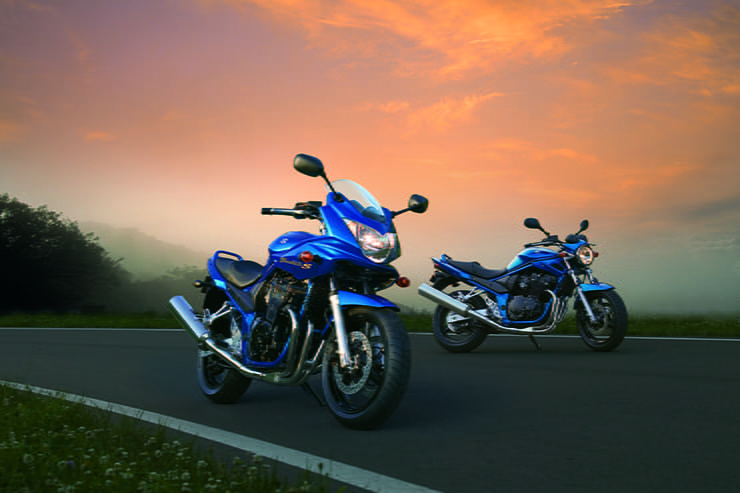 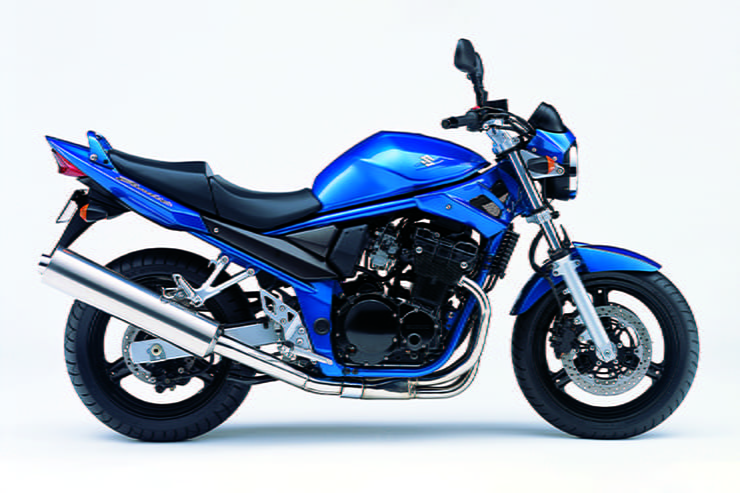 Everyone knows the name Suzuki Bandit. But few appreciate what a game changer of a motorcycle this air-cooled naked from Suzuki actually was. Before the Bandit 600 (ok, technically it is the GSF600 Bandit but everyone just calls it the Bandit six) existed, if you wanted a naked bike with a bit of spirit you were basically stuffed. Or, worse still, lumbered with some antiquated relic from the 1980s. In 1995 the Suzuki Bandit arrived and introduced bikers to a new generation of muscle bike. One that was not only extremely cheap, but also great-looking and built using thoroughly modern techniques.

Powered by an air-cooled motor that predated the dinosaurs, the Bandit 600 not only looked butch, it also delivered enough torque to ensure that this muscle bike actually could flex its biceps. At just 599cc it was never going to be the next Arnie (that job was left to its bigger brother, the Bandit 1200) but it was king of its segment and that was all it needed to be. Add in to the mix a tubular steel chassis that gave it street fighter-style aggressive looks, modern suspension, flat bars and a cool name and the Bandit was an instant hit. And a massive one at that, becoming the UK’s best selling bike at a time when sportsbike sales were booming.  Although a price tag of just £3999 was certainly a factor.

Nowadays the Bandit 600 has dropped into the ‘cheap hack’ price band with examples even costing less than a grand, which does slightly do this bike a disservice. That said, if you want a cheap machine to blast through traffic, practice your wheelies with or just enjoy the thrill of two wheels on if you are constrained by a tight budget, there are few better bikes for the money than a Bandit 600. Cheap motoring at its very best – and there is nothing wrong with that at all. 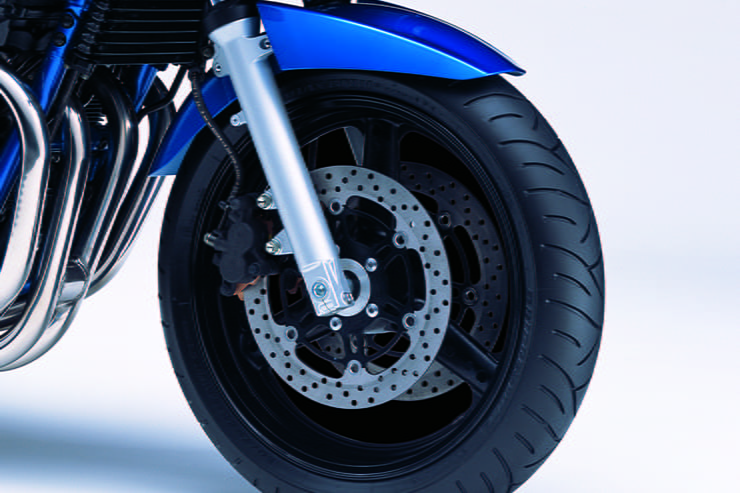 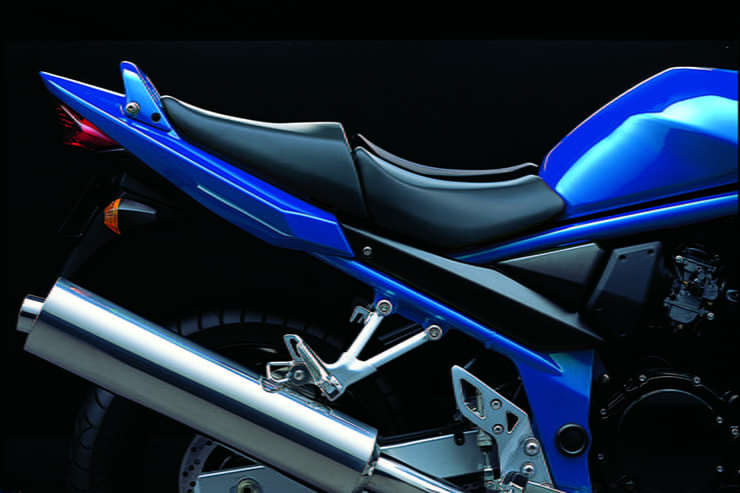 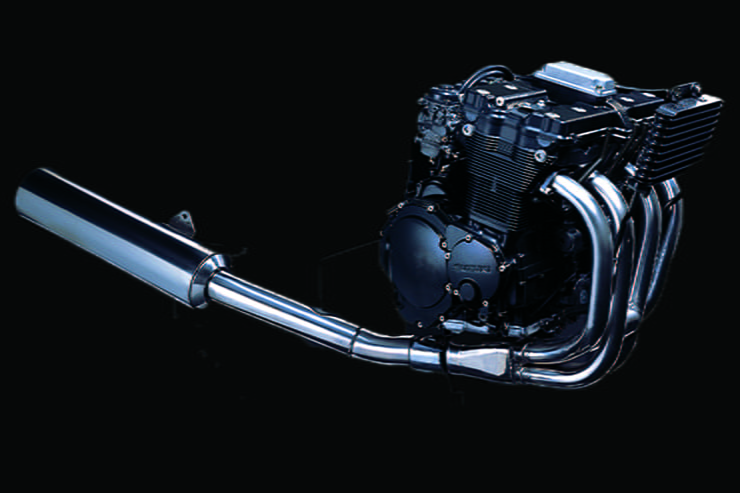 The Bandit was built to a budget and as a result the general level of finish is a bit low, so while mechanically they are fairly bullet proof, you have to expect it to look tatty - especially after over twenty years! That said, if you find a tidy one, it is a great sign that the previous owner did actually care for it rather than just run it into the ground. So where to look?

The Bandit’s exhaust system is a weak point and the collector box rusts and cracks, which is an MOT failure. You can get a link pipe to bypass this area and it is financially worth fitting one rather than splashing out on a new system. The air-cooled motor itself is about as solid as they come, so just check the usual areas such as listening out for nasty noises, finish and if it has any clutch/gearbox issues. It is unlikely to have any major faults, but a lack of carb balancing can make them run quite poorly and some owners report the clutch is weak. Using synthetic oil can also make the clutch slip, so stick with a basic multigrade.

Onto the chassis and be very wary of rust or any signs of damage to the frame. The frame is colour-matched to the bike, so ensure it is correct as if not, that may mean the bike has been down the road and repaired. The Bandit’s suspension is very basic and popped fork seals are common while the shock’s preload adjuster seizes solid and so do the suspension linkages. While you are checking these, also ensure all the bearings move freely (Mk2 models are prone to head bearing failure) and that the brakes aren’t seized or warped. Take a few steps back and also check the subframe is true as it can get bent in an accident and is seldom straightened afterwards. Also check the welds were it meets the frame for fractures.

Finally, give the electrics a good inspection as the loom can be weak and has a habit of rubbing on its brackets, causing the bike to cut-out as the bare wires are exposed and short. The Bandit is a cheap, cheerful and solid bike which is generally a fairly safe used buy, but hounds are also pretty plentiful! And always avoid any highly modified machines as they are just trouble… 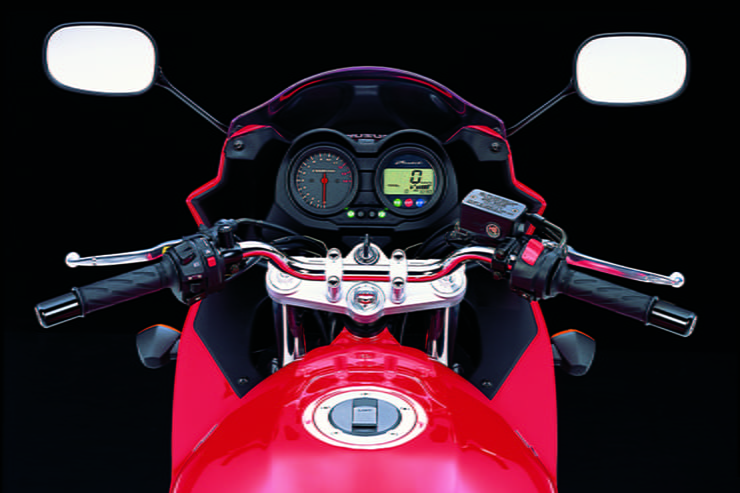 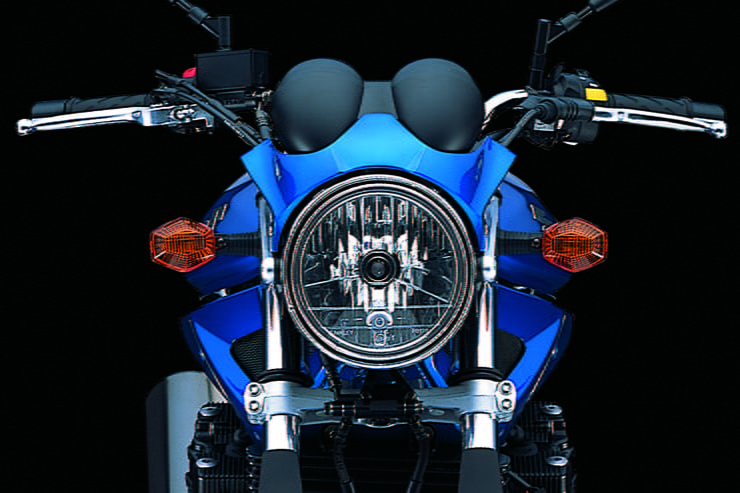 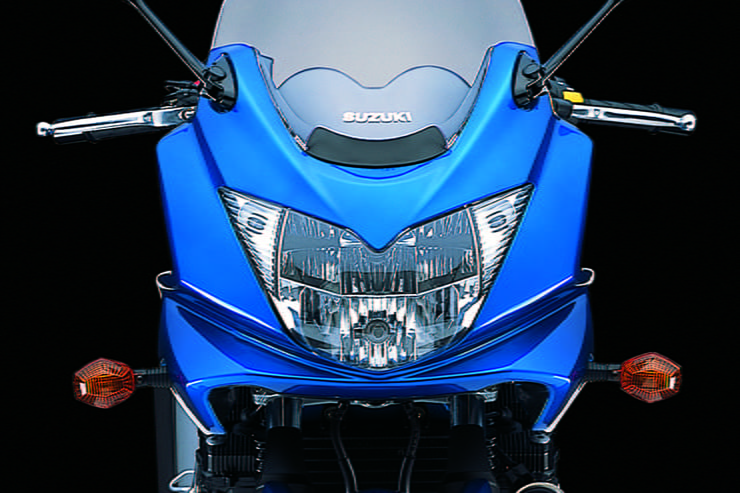 The Bandit was launched in naked N and half-faired S guises and only received a small update of a carb heater in 1997 until 2000 when a new frame, altered suspension and revised styling that included an LED speedo arrived, alongside very small engine tweaks. A fuel gauge joined the party in 2002, before the major update happened in 2005 when both Bandit models grew in capacity to become the GSF650N and GSF650S through a 56cc larger motor and revised suspension. The all-new water-cooled Bandit arrived in 2007. 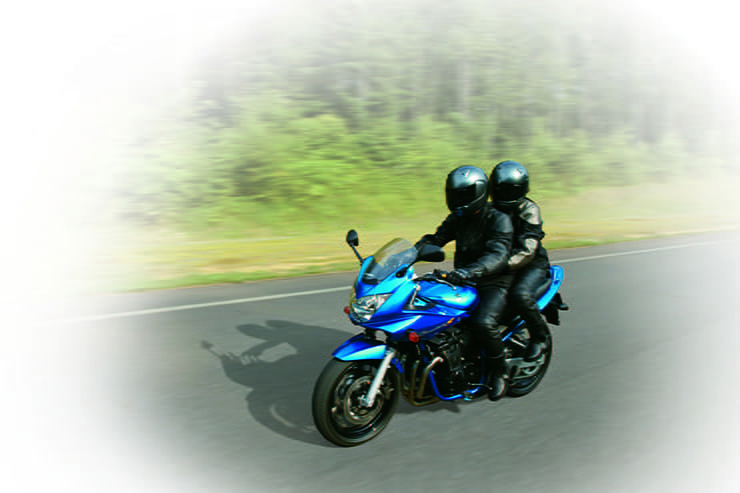 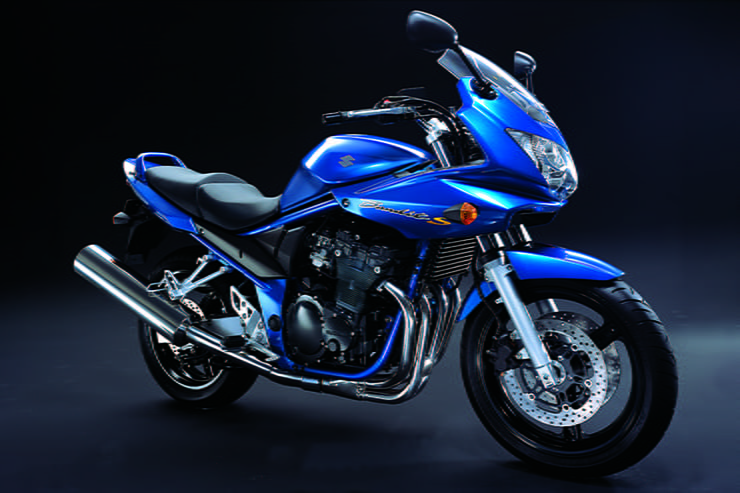 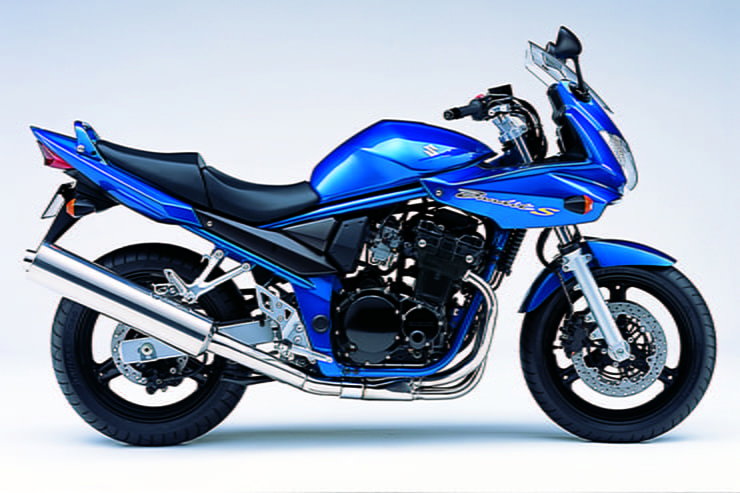 The Bandit was a huge seller for Suzuki and as a result there are loads of used examples out there. From the cheap hack to the tidy runner, there is a Bandit to suit any wallet. Right at the bottom end of the price bracket, you can get a tatty early Bandit 600 for under £1,000. It will have had a hard life, but as long as you check the basics all should be well as the motor is very solid. Spend around £1,500 and you should get a slightly prettier bike, which is worth doing, however if you want a late model 600 you are looking at spending £2,000-£2,500. Prices for the air-cooled 650 start at £1,800 for a high-mileage bike and again go up to just over £2,500, which is when you can start to pick up a water-cooled model. Bandit owners tend to use online auction or selling sites or local adverts rather than the established bike sales sites as they are cheap bikes and sellers want to avoid high fees, so hunt in these areas first.

Where do you start? There are loads of Bandit owners’ groups and Facebook groups out there, so you can pick and choose.

If you want parts, give Just Bandits (the clue is on the name) a shout at www.justbandits.com or contact Bandit Mania in Lincoln. 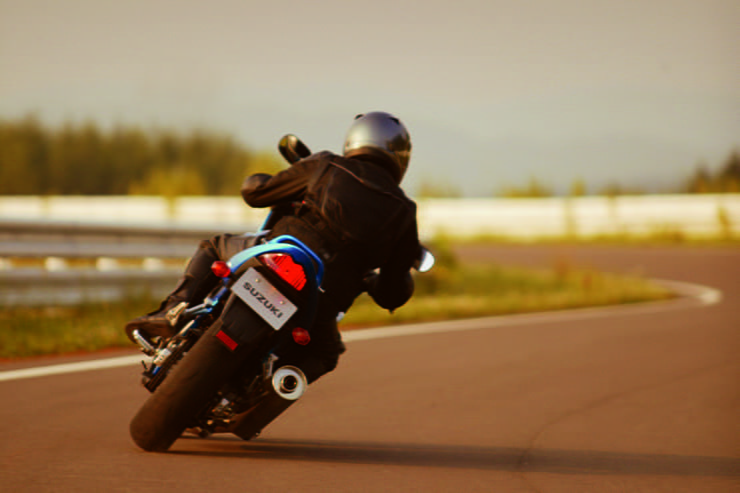