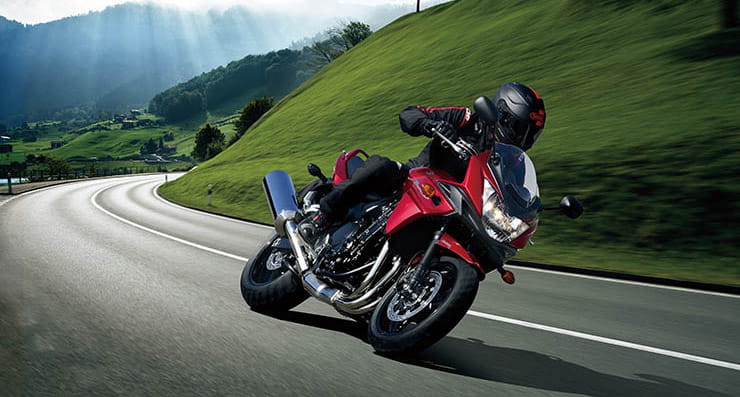 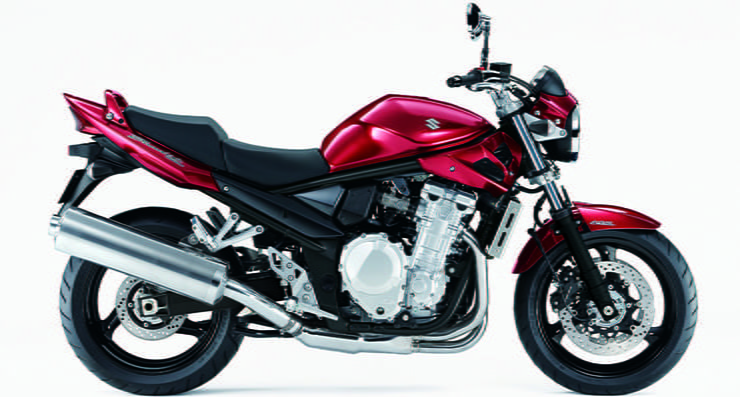 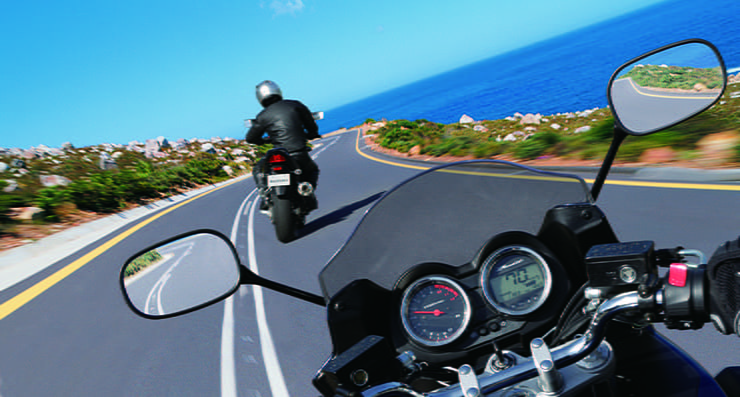 Suzuki’s air-cooled Bandit 1200 was a hugely popular model and attracted a strong fan base. However times change and with tightening emissions laws, in 2007 Suzuki released a brand new water-cooled big-capacity Bandit model. Cheap, packed full of grunt and extremely practical, it was a worthy successor and even had a (brief) resurrection after its untimely demise.

Suzuki went to town when it came to updating the Bandit’s engine and the all-new motor shares no components with the outgoing air/oil-cooled unit. As well as growing by 98cc to 1255cc from the old Bandit 1200’s 1157cc through a 5mm longer 64mm stroke, the cylinder’s gained an SCEM plating (Suzuki Composite Electrochemical Material) which consisted of a nickel-phosphorous-silicon-carbide plating where the old model simply had cast-iron liners. And it was surrounded by a water jacket where the old model was air/oil-cooled. At the back of the motor, Suzuki semi-stacked the new gearbox and also added a more than welcome sixth gear to boost economy figures. To make the motor nice and smooth, a small secondary balancer shaft was also used to limit vibrations. Finally, the old rocker valve system was updated to a bucket and shim style, which not only reduced noise but also increased the valve clearance service intervals, and the 1200’s carbs swapped for a new fuel injection system. While the GSF1250 made the same claimed peak power of 108bhp as the 1200, it made a stack more grunt (18% according to Suzuki) with 79.6ftlb compared to the old model’s 67ftlb with most of the new thrust located in the lower rev range. 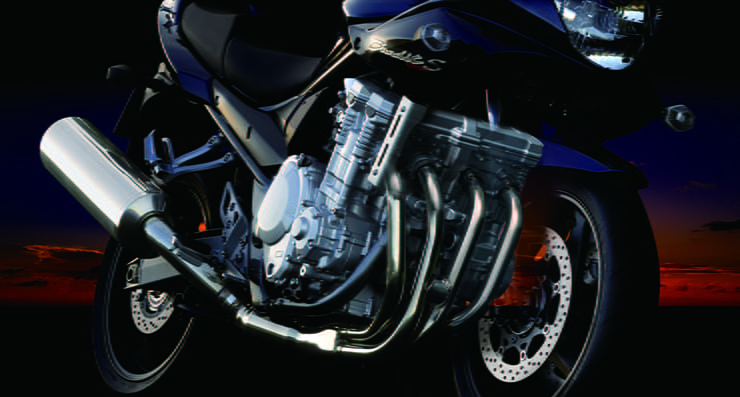 To keep costs down, Suzuki stuck with a steel cradle chassis on the Bandit 1250. However while the frame’s walls had the same thickness as before, their diameter was 4mm larger to increase stiffness by a claimed 10%. Thanks to the semi-stacked gearbox, the new water-cooled engine was shorter in length, allowing Suzuki to reduce the Bandit’s wheelbase by 5mm to 1480mm and give it sharper geometry for a sportier ride. The seat’s height was also made adjustable to either 790mm or 810mm, which is a nice touch.

There isn’t much to shout about when it comes to the Bandit’s suspension and the chunky 43mm forks are conventional and not inverted items to keep costs down and only feature preload adjustment. The monoshock is similarly basic with again only preload that can be altered.

Suzuki armed the Bandit with what is best described as ‘effective’ braking rather than really pushing the boat out. The Tokico front calipers are four-piston conventionally mounted items and grip 310mm discs while the rear is a single-piston caliper with a 240mm disc. The naked Bandit wasn’t offered with ABS, however all half-faired models come with it as standard fitment. 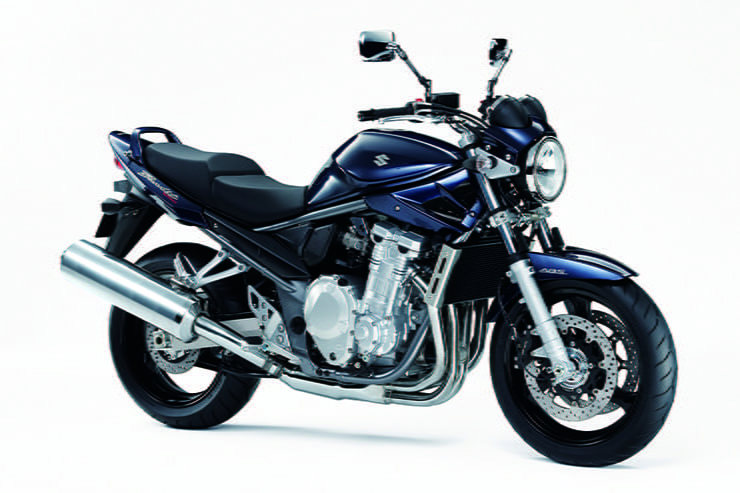 The Bandits budget price tag is reflected in its suspension

Aside from ABS on the half-faired models, electronic gadgets are in rather short supply on the Bandit 1250. The original model’s twin analogue clocks were updated to an analogue rev counter and digital speedo in the 2015 update, but other than a digital fuel gauge there is nothing digital to write home about. Or email home about…

Bandits are super-comfortable bikes and the fact you can alter the seat height makes it ideal for a variety of shapes and sizes of rider. The seat is well padded, the stretch to the bars nice and natural and the pegs low. While the OE screen isn’t the most effective on the SA, this is easily sorted through one of the huge number of aftermarket items on sale.

Passengers are well catered for on the Bandit and not only is the pillion seat equally as padded as the rider’s, you also get a large grab-rail as standard. The torque-laden nature of the Bandit’s big-capacity motor also means gear changes are few and far between, helping reduce the number of head clashes! 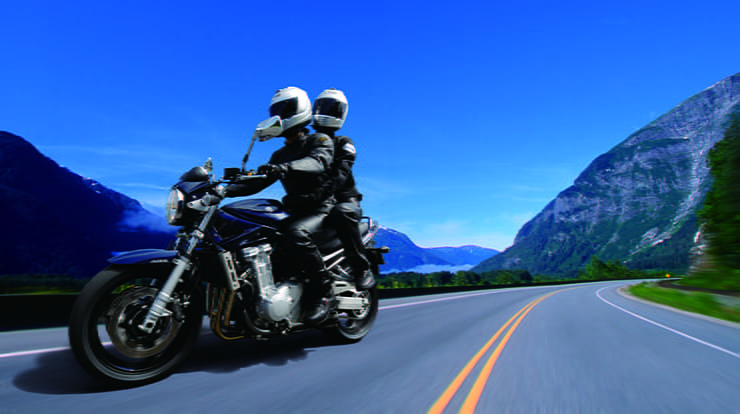 With a big, grunty four-cylinder engine, basic but adequate tubular steel chassis and masses of versatility the Bandit was always a great-priced, straight-forward, rugged all-rounder. But despite effectively being succeeded by the GSX1250F (which used most of the Bandit’s running gear but with a full, sports-touring fairing) Suzuki have reintroduced its old favourite, now just in 1250S half-faired guise, for 2015. And we’re glad they did.

Whichever way you slice it, the Bandit 1250’s a hell of a lot of bike for the money and is characterised by its smooth, no-messing grunt. The tubular steel frame and non-adjustable suspension may be fairly basic but it does the job: it’s impressively stable and yet still agile enough to be fun, it’s roomy and comfortable for two and the half-fairing does its job at keeping the worst of the weather at bay.

Equipment-wise, although fairly low-tech by modern standards (you won’t find any riding modes or traction control here, although it does have ABS), it’s decently enough built, has a solid reputation for ruggedness and reliability and should be capable of clocking huge mileages. You simply can’t get more bike for the money than this - welcome back Bandit 1250, we have missed you.

There are a lot of plus points when it comes to owning a Bandit 1250 and they are a fantastic bike for no-frills motoring and churning out the miles. The 1250 engine is an absolute torque-monster and that makes for a really relaxed ride either solo or with a passenger as you seldom find the need to change gears once on the move. But there are also a few downsides…

To be brutally honest, the Bandit has and always will be a budget option and as such it does feel somewhat antiquated when compared to more modern machinery. A strong engine is one thing, but with only ABS to show-off about, it is left lacking when you look at it compared to machines such as the Kawasaki Z1000SX or Yamaha MT-09. And its handling isn’t on a par either. There again, not many rivals can flex their muscles to quite the same extent as the larger capacity Bandit. And then there is the look, with is more than a little 1990s in its styling and doesn’t stand up to the ravishes of a winter particularly well.

If you are the kind of rider who enjoys a bike with a lot of torque and also has a keen eye for a bargain, the Bandit 1250 is a great value machine and an excellent motorway commuter. But if image matters to you as much as performance, and you are planning touring holidays, maybe look for a used SX instead. 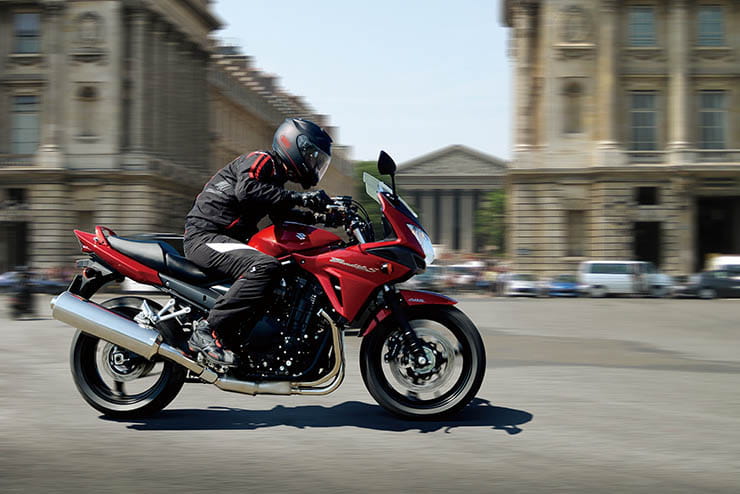 The Bandit is right at home as a daily commuter

Mechanically the Bandit 1250 is about as solid as they come and the motor has virtually no known issues aside from the occasional reg/rec going down. Low revving and hardly straining when it comes to its peak performance, it’s a sound lump and Bandits with over 100,000 miles on their clocks aren’t uncommon. The service intervals are fairly long and due to its exposed nature it is a cheap bike to get worked on as everything is easily accessible. But that’s not to say you can just buy one blind as like so many budget Suzuki models, the finish is an issue…

The paint on the Bandit 1250 is pretty poor and areas that are in direct line of fire of stones such as the engine, wheels and fork legs quickly rust if the paint becomes chipped. A shabby Bandit is, sadly, an all too common sight. While this doesn’t bother the bike in terms of reliability, visually it makes it look a dog. And any plated areas are also quick to corrode if not kept spotlessly clean and treated to an anti-rust protection regularly. Bandits get ridden all year, whatever the weather, and corrosion is the price you pay for this kind of use and suspension linkages also seize up as a result.

Due to the frugal nature of the Bandit, many owner do their own oil and filter maintenance, so you can’t expect to see a full service history, but ensure the 14,500-mile valve clearance check has been completed by an authorised mechanic.

A lot of owners modify their Bandits and this can open a can of worms. The OE bars are a bit wimpy and get swapped for Renthals, so check they don’t foul on anything or hit the tank on full lock, and also check the brake lines are long enough! Ensure that any accessory parts won’t see it failing an MOT and be extra wary of replacement lights, heated grips or indicators as these can cause havoc in the wiring loom. Overall, a standard bike is a far better buy than a heavily modified one. 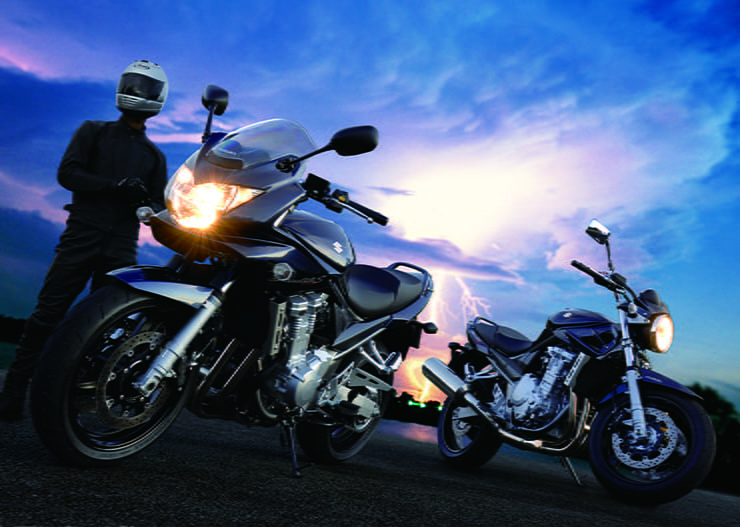 The original Bandit 1250 arrived in two forms, the half-faired GSF1250SA and the naked GSF1250A. Spec-wise they are identical with only the A’s single round headlight and lack of half-fairing the difference, although ABS was only available on the SA model. This generation was never updated, however there were a few variations made by Suzuki UK that basically took the stock bike and added optional extras to create more touring inspired models such as the GT with its full luggage set. This generation of Bandit was discontinued in 2012, however it reemerged in 2015 as the GSF1250S with emissions-conforming engine mods, a sportier-looking half-fairing and a new set of clocks with an analogue rev counter and digital speedo. In 2010 Suzuki effectively took a GSF1250SA and gave it a bit more of an aggressive style to create the GSX1250FA. The GSX gained a full fairing with a sporty GSX-R1000 headlight, new clocks, ABS and a few very small updates. 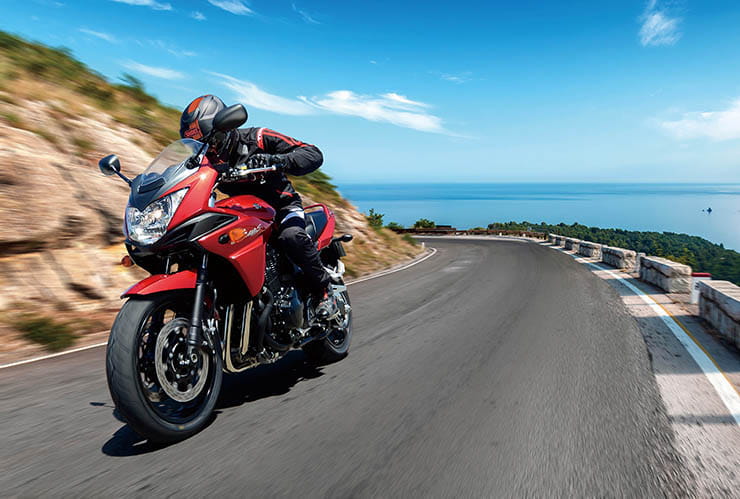