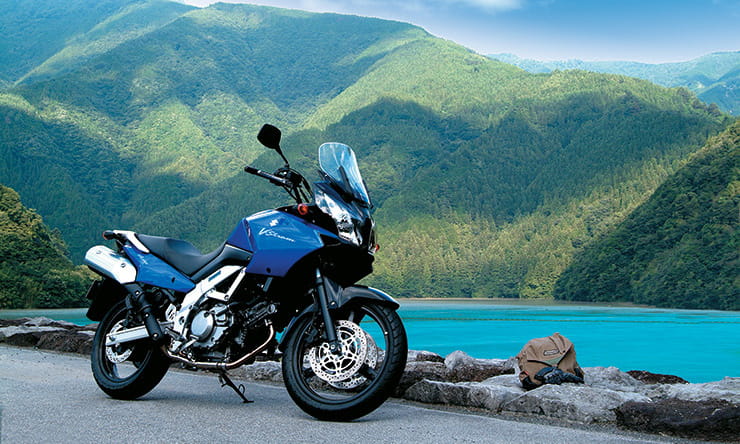 Never judge a book by its cover as despite the fact Suzuki’s middleweight adventure bike looks a bit ‘challenging,’ beneath its ugly façade is a simply fantastic machine just bursting to get out. Powered by the SV650’s V-twin engine, this wonderful bike will soak up the commuting miles during the week and merrily whisk you away on a touring holiday when the need arises. It’s also amazingly cheap to both buy and run, virtually indestructible and so practical it makes you wonder why everybody doesn’t have one in their garage. A brilliant bike and hugely underrated – except by its owners! 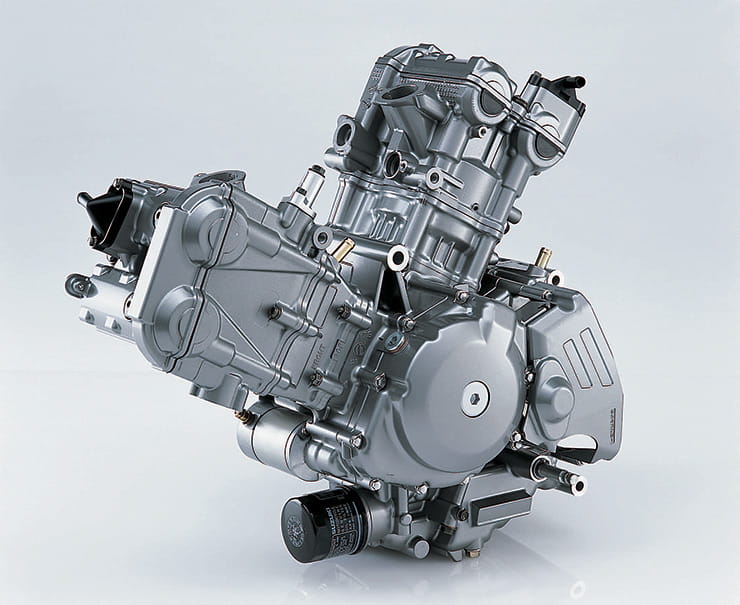 The DL650 uses what is essentially the same engine as the pre-twin-spark SV650 models run (the twin-spark motor arrived in the V-Strom’s 2012 update) and is the fuel-injected motor, not the carbed version. The liquid-cooled 90-degree V-twin has very slightly re-profiled camshafts when compared to the SV, which Suzuki claimed boosted the V-Strom’s mid-range by 5% with only a small loss of 7bhp at the top end. While the internal gear ratios are the same, the V-Strom runs slightly lower final drive ratios than the SV650, helping give the adventure bike a bit more pep off the line at the expense of top end speed. Suzuki claimed the V-Strom would do 45mpg in real world riding, giving it a theoretical range of over 200 miles from its 22-litre tank. 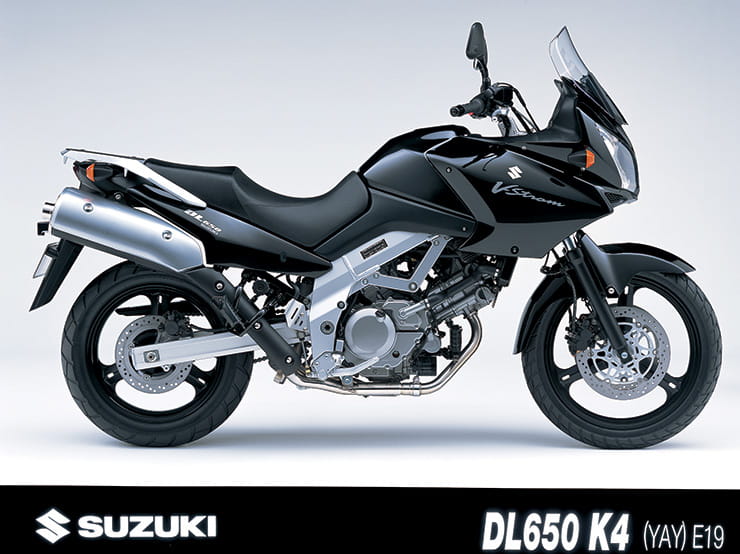 The aluminium twin-spar chassis is unique to the V-Strom and is not simply a repurposed SV chassis while the swingarm is also specific to the DL650. Unlike some current adventure bikes, the V-Strom’s screen is adjustable through a 50mm range, although altering its position does require using the onboard toolkit. So if you are buying a used V-Strom, check under the seat to see of the toolkit is still there! Impressively, as well as the huge 22-litre tank, the V-Strom came with a handy luggage rack as standard. 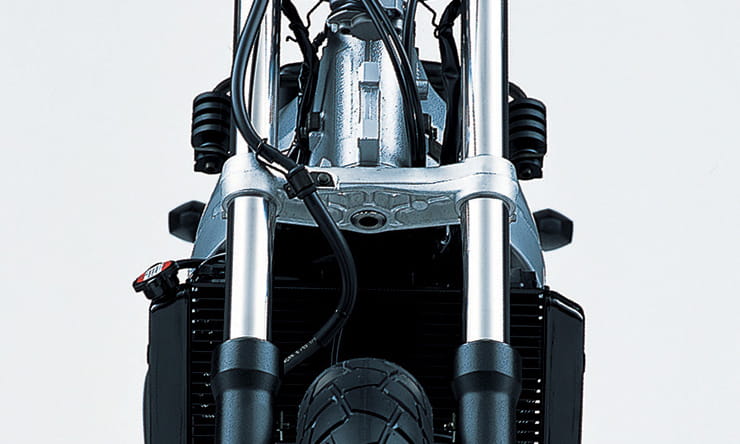 The V-Strom 650 was always a budget bike (in 2004 it cost just £5150, which was only £800 more than the SV650), but it did come with some reasonably high-spec suspension. The Suzuki’s 43mm Showa forks have adjustable preload (the SV only gained this feature in 2002, three years after its launch) while the shock can have its spring preload adjusted via a remote knob. Considering the V-Strom’s price tag, this is pretty impressive and its 150mm of travel is good at soaking up the bumps without getting too wobbly. 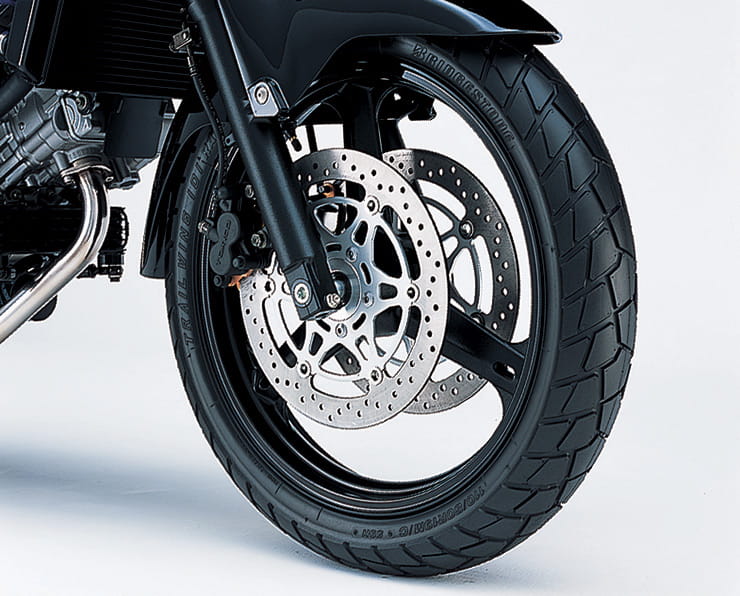 Initially, the V-Strom was sold without ABS, but this arrived in 2006 in the ‘A’ version, which cost £250 more. The twin front brake calipers are the same two-piston Tokico sliding units as the SV650 runs and grip the same 310mm discs while the rear caliper is a single-piston unit with a 260mm disc.

The V-Strom’s dash is its only electronic bit of gadgetry, however rather pleasingly it does come with a fuel gauge, clock and two trips. 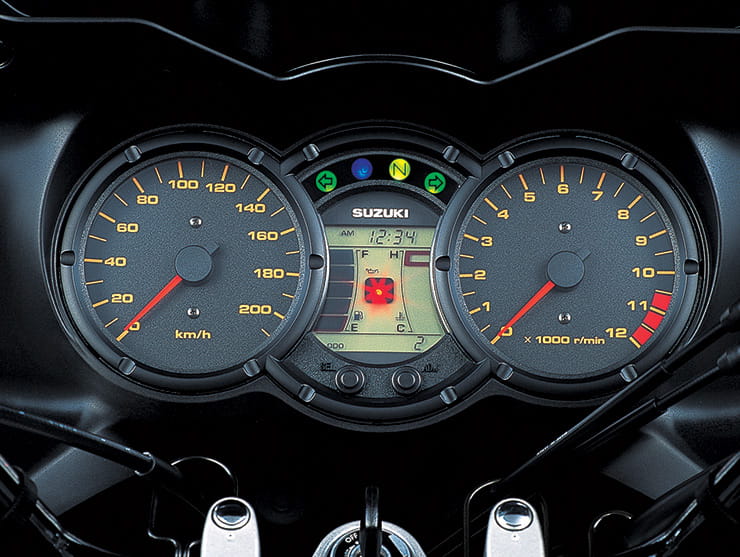 Big and roomy with a wonderfully padded seat, low pegs and high bars, the V-Strom is a very relaxed bike that soaks up the miles. The screen is adjustable, the tank range huge and Suzuki sold loads of touring-inspired extras such as brush guards, a taller screen, centre stand, luggage etc. Shorter riders will appreciate the V-Strom’s low 820mm seat height and narrow waist, not to mention its 189kg dry weight, while taller riders will be pleasantly surprised by its ‘big bike’ feel. Weirdly, the original model’s large fairing actually put riders off buying the bike as it made the Suzuki (incorrectly) appear heavy and bulky, which is why it was slimmed down in its 2012 update. 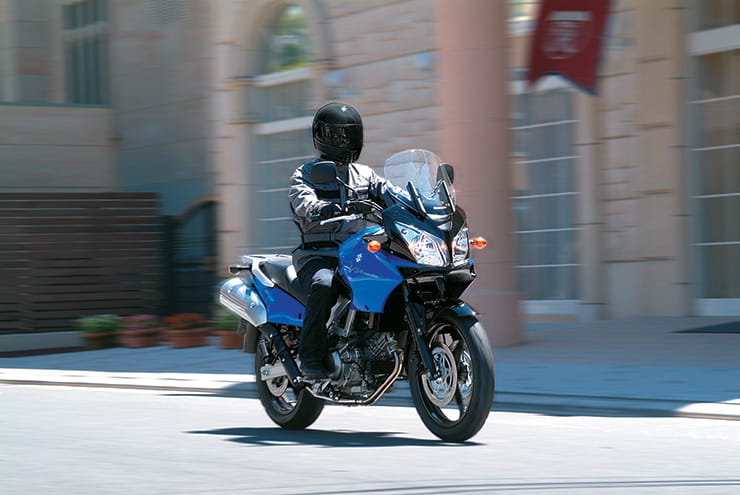 Pillions love the V-Strom as you get a well-padded seat, grab handles and even the option of a top box to lean against. Riders will appreciate the remote adjuster should they wish to increase the preload to compensate for the weight of a pillion and/or luggage. 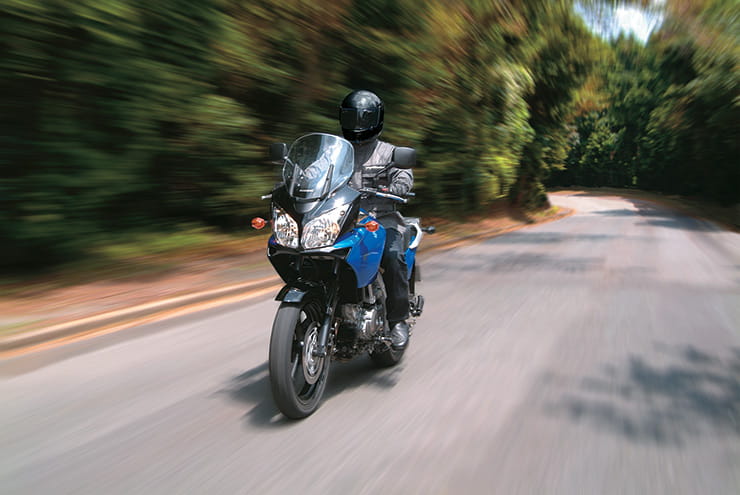 In 2004 the term versatile and practical was used in almost every test involving the V-Strom 650, but unfortunately so was fugly… The issue the V-Strom had was its bigger brother, the V-Strom 1000, had already gained a reputation as a big of a minger and the V-Strom 650 looked almost identical. Those testers who delved beyond the bike’s styling soon discovered a brilliant do-it-all machine, but sadly it was never the sexist of bikes and there wasn’t much call for middleweight adventurers in the early 2000s, so the V-Strom kind of floated below the radar. Those who were looking for such a machine found the V-Strom far better performing on the road than BMW’s single-cylinder F650GS and Honda’s Transalp, but it never came close to replicating the SV650’s runaway success. In the end, Suzuki UK were forced to create a variety of ‘special’ editions to stimulate sales as this was a bike that riders needed to ride to fall in love with, not just see it in a sales brochure and lust after.

It is hard to sing the praises of the V-Strom 650 highly enough. Yes, it’s not the sexist of bikes. Yes, it’s not great looking. But ignore these small issues and you will discover a wonderful machine that is absolutely fantastic at hacking through traffic. While the V-twin engine has been altered over the years, it hasn’t been radically revised and the V-Strom’s lump remains more than up to the job. Frugal, spirited and totally bulletproof, the little V-twin is incredibly user-friendly and charming and almost impossible to fault. Add to this a bike that handles surprisingly well (some owners even fit a 17-inch front wheel to create a kind of big supermoto), is very comfortable and has a huge tank range and it doesn’t get much better. In fact, that’s not true, it does – you can find an early used V-Strom 650 for less than £2500. That’s amazing value for money if you are after a day-to-day do-it-all machine. 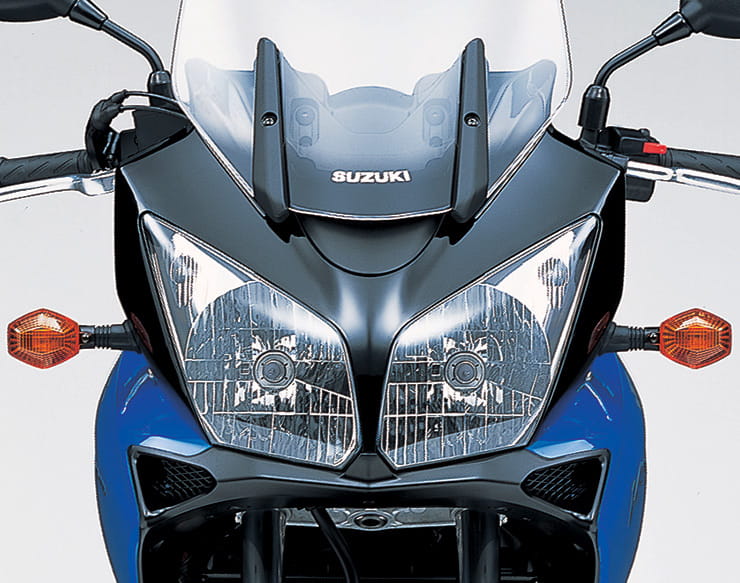 The V-Strom is a very solid bike, but its rugged nature does see it get abused and not really cared for and that’s one of the major issues to be wary of. Commuter hacks (there are quite a few around) are best avoided as the V-Strom’s build quality isn’t brilliant and that can lead to silly, and irritating, issues such as seized brake calipers, seized fasteners and rust problems. If possible, avoid high-mileage bikes.

The V-twin motor is very solid, however it only runs a relatively small amount of oil so always check its level and listen for any rumbles when the bike is running that may hint at big end issues due to it being run low on oil. A few bikes develop cam chain tensioner issues, so listed out for that telltale rattle, and also inspect the front cylinder’s exhaust studs. The studs are in direct line of fire from road crud (you can buy mudguard extenders) and that makes them rust terribly and seize in place. Also, the front cylinder’s spark plug recess fills with water, causing a miss-fire. There is actually a drain hole, but owners forget to clean this out (stick some wire up it) so also inspect the plug for rust.

The two-piston calipers are sliding units and that means corroded sliders can lead to them seizing. It’s not a tough or expensive fix (rebuild kits are about £50), but always get the front wheel in the air and give it a spin while listening out for any dragging sounds. Also, check the discs aren’t warped.

Generally with a V-Strom 650 you are looking for consumable items (chain, sprockets, tyres, brake pads) and also weeping suspension and obvious MOT failures such as bent bars. But always watch out for poorly fitted aftermarket electrical accessories (heated grips, 12-volt sockets) as the Suzuki’s wiring loom isn’t the strongest…

Overall, the V-Strom is a solid little bike and if you buy a decent one, with good accessories, you will be delighted with your purchase.

The V-Strom 650 was launched in 2004. An ABS ‘A’ model joined the range in 2006 alongside a ‘Touring’ edition. This was Suzuki UK’s idea and was effectively an accessorised V-Strom that gained a top box, centre stand, heated grips and hand guards. It was only £250 more than the stock V-Strom, which was less than buying the accessories separately. In 2007 Suzuki UK created the V-Strom Grand Tourer, which came with ABS, a top box, heated grips, hand guards and panniers as standard, while the 2010 Xpedition added a sump guard to the GT’s package. A new generation of V-Strom arrived in 2012 with a sleeker look, twin-spark Gladius motor and improved fuel economy (but a smaller tank). 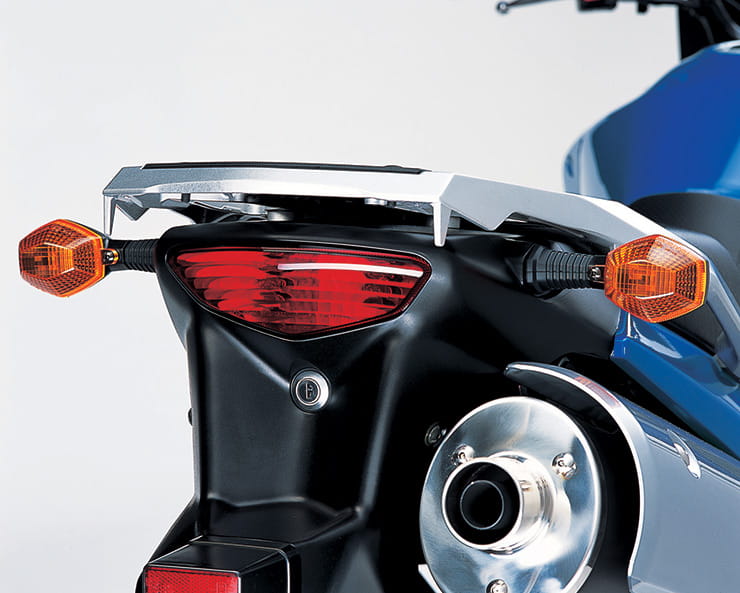