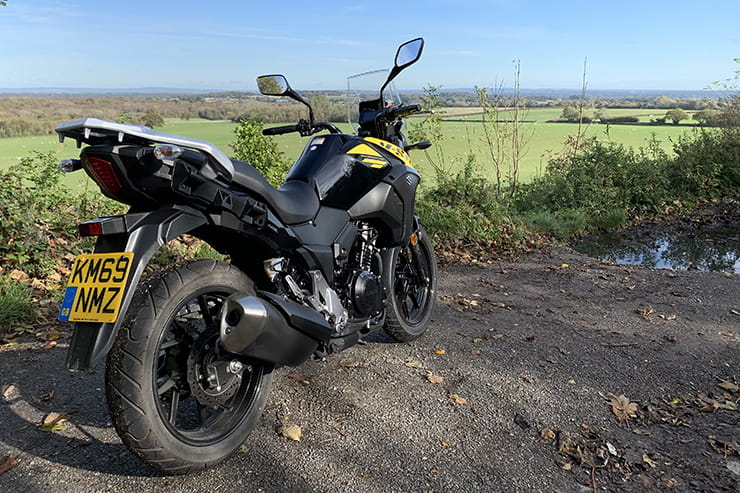 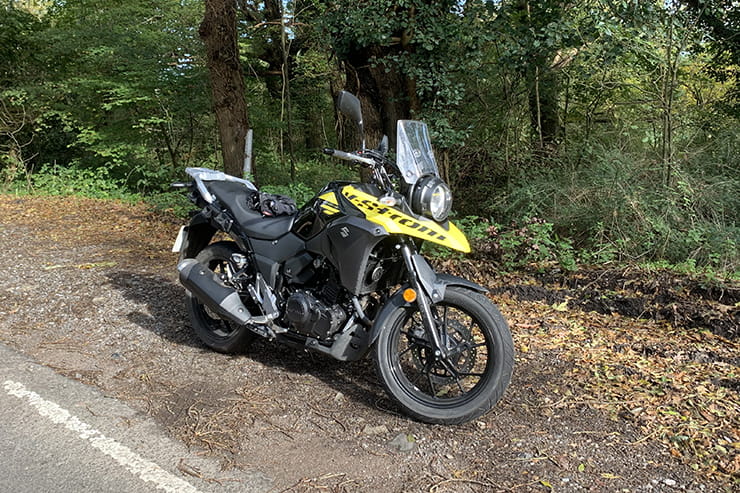 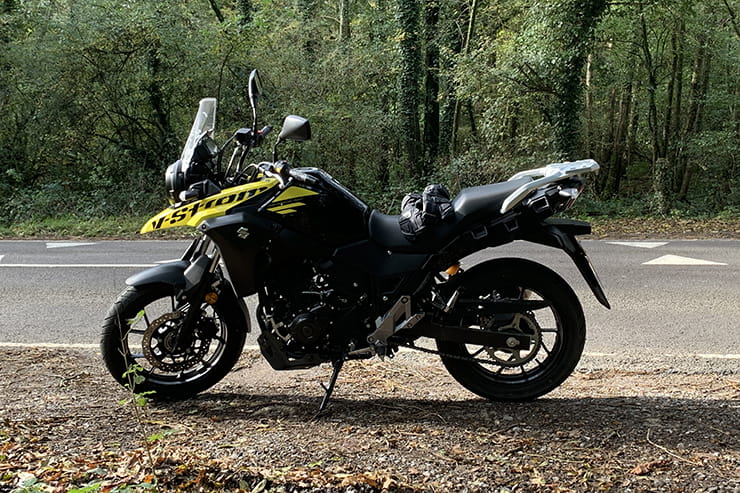 Affordable, user-friendly and really enjoyable to ride, Suzuki’s 250cc V-Strom is also surprisingly capable too. BikeSocial spent a couple of weeks commuting, scratching and touring on it. We couldn’t find anything it didn’t do well at.

List price is £4899, which is £500 less than BMW’s G310GS and £300 less than Kawasaki’s Versys 300. The Suzuki’s performance is slightly down on both its competitors, given the slight differences in cost, but Suzuki dealers tend to be very generous with discounts, especially on pre-registered of very low mileage ex-demo bikes and we’ve regularly seen V-Strom 250s on sale for much less than list price. At those prices, the V-Strom is well worth a look.

24bhp doesn’t sound a lot if you’re used to bigger bikes, but its twice as much as a learner-legal 125 and enough to keep up with traffic, even on a motorway.

Being a twin cylinder engine means it lacks the low-down pulling power of BMW’s G310, so you need to use all the revs and a lot of gearchanging to get the most from it. As the revs rise, the Suzuki feels more confident, comfortable and less stressed at higher speeds. Cruising at 70mph on a motorway is 8500rpm in top gear (redline is at 10,500rpm). The idea of running those kind of revs for hundreds of miles seems inhumane to the poor little motor, but one of our tests was just that; 330 motorway miles in a day and it coped absolutely brilliantly – no vibes, no protests and surprisingly relaxing.

It feels like it needs 10mph more top speed, or 1500rpm less at 70mph, or maybe even a seventh gear to make motorway riding just a little more relaxed.

The flip-side of that was the motor being surprisingly flexible in the lower gears. Finding ourselves in the South Downs climbing the semi-legendary Ditchling Beacon road (the steepest hill in the area, but still just a slope to those of us born north of Sheffield), the little Suzuki romped through the uphill hairpins in third gear, with gusto. 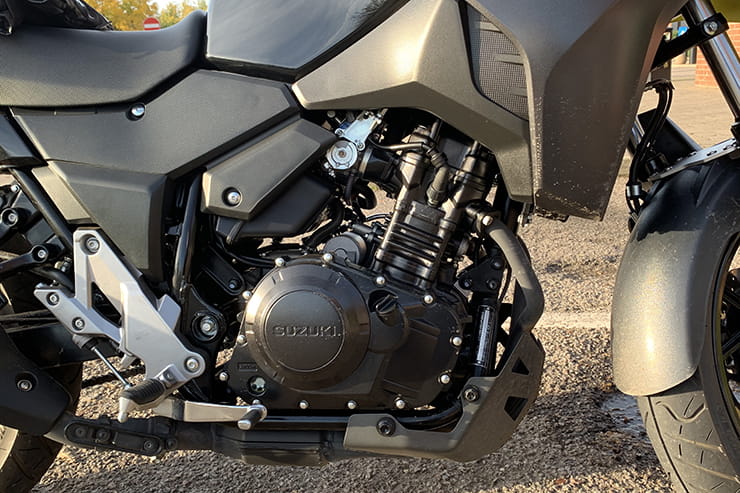 Water-cooled, fuel-injected twin cylinder, with a six-speed gearbox. The engine is also used in the (no longer imported) Inazuma 250. 24bhp from a modern 250cc twin suggests a relaxed state of tune (Honda’s CB250N Superdream made ten per cent more power back in 1978), meaning reliability should be excellent. It’s an easy engine to use, not so much about power as ‘drive’. Which matters, given that most buyers will be new riders. The clutch is light, gearbox slick and power delivery is linear and consistent. You need to be in the upper rev ranges to make serious progress and overtaking needs a bit of forward planning, but on a typical A-road where the cars and trucks are doing 55mph, you can get to the front of most queues without taking risks.

One thing I wasn’t expecting was how easy it was to stall when doing a U-turn. Usually, at the moment when you turn the bars and the front wheel wants to drop, a quick squirt of power makes the bike steer and make the turn. On the V-Strom a small squirt of throttle brings virtually no power and the bike flops over wanting to fall. It took a while to get used to applying more gas. 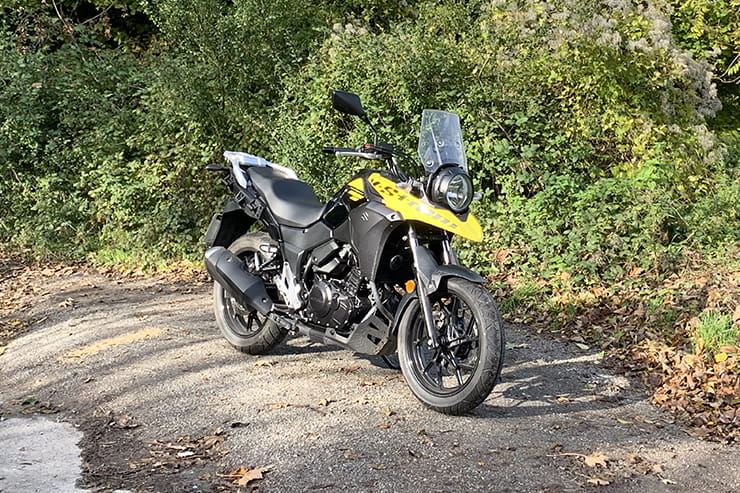 Small for an adventure bike, big enough to feel like a proper bike though

The simple chassis feels both big enough to be a credible ‘proper’ motorbike and light enough to surprise you when you realise it weighs the same as Suzuki’s 165bhp GSX-R1000 did back in 2005. Talking about ‘handling’ on a bike like this is as much about nippiness in town as carving through corners. The little Suzuki feels cheeky enough to nip in and out of traffic, slip into the odd cycle lane and maybe even… (insert your own limits of cheeky behaviour here).

The V-Strom’s basic suspension and a comfortable riding position work well together to give confident cornering and stability at low and higher speeds too. Suspension copes well with bumpy motorways but less so on back roads where the bumps and lumps were felt more than expected and took longer to settle than they should. Adventure bikes sell well because their typically long-travel, soft suspension soaks up the worst of UK potholes. The V-Strom feels a bit like it’s been ‘adventure-styled’ and Suzuki forgot to add the performance to go with it.

Single discs front and rear with ABS should be more than enough for a bike this light. There was something amiss with the front brake on our test bike, pulling the lever felt like something was sticking in the system. The brake didn’t apply smoothly, needing a firm grab to get decent power. I’ve ridden other V-Strom 250s where this didn’t happen, so assume this was a service issue. There was plenty of power to stop such a light bike, just not the correct action. 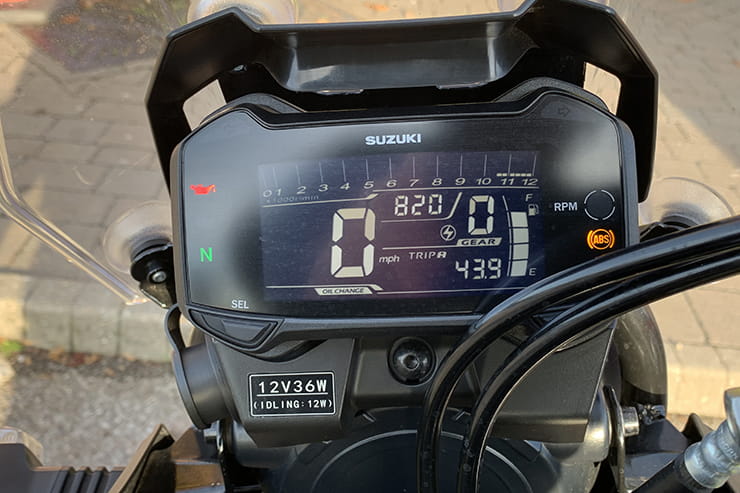 Gear indicator is useful, fuel gauge also because it goes so far between fill-ups. 12v socket can power your sat-nav or heated clothing

The biggest surprise on our long touring session was how comfortable the bike was on a very long day. 330 miles at an average of 50mph meant almost seven hours in the saddle with no aches or pains anywhere. That’s astonishing. Plus, the Suzuki’s narrow dimensions and clever positioning of handlebars and mirrors allow it to filter through the narrowest gaps without clonking the tall mirrors on vans or the lower ones on cars.

ABS is standard, but even our sticky front brake needing a massive handful of lever didn’t trigger it. Instrumentation is reasonably comprehensive including a gear position indicator and there’s a 12v accessory socket. The fuel tank holds 17 litres, which at 80mpg is a theoretical 300 mile-plus tank range. 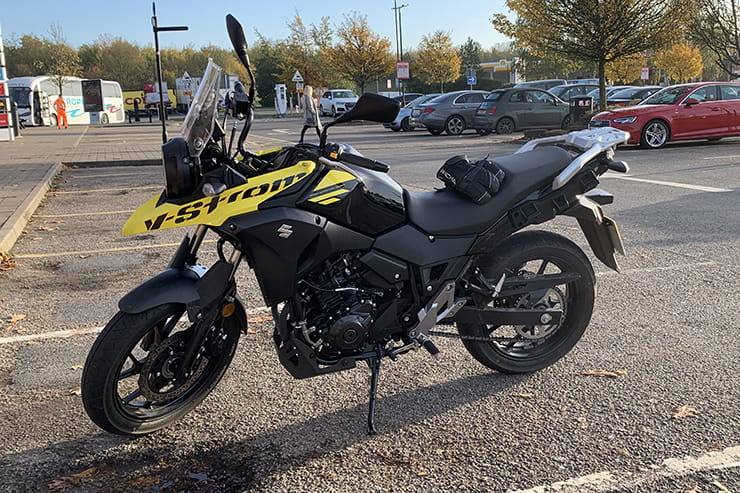 Not just for adventuring, the V-Strom makes a superb daily-rider and year-round commuter too

If you started riding because you want a cost-effective alternative to public transport or a car that can keep up with traffic, filter through any gap, be comfortable for hours, reliable, easy to ride and look pretty good in the office car park too, you could do a lot worse than spend an hour at your Suzuki dealer haggling a good deal on a V-Strom 250.

As an alternative to a scooter for commuting it makes a lot of sense. As a daily rider that can also take you off for a gentle adventure at weekends, ditto.

It won’t keep up with bigger bikes for long and you won’t have the bike meet regulars asking macho questions about ‘what will it do mister?’. Getting the right deal is everything on this bike because for the right price, it’s a serious commuting (and more) contender. 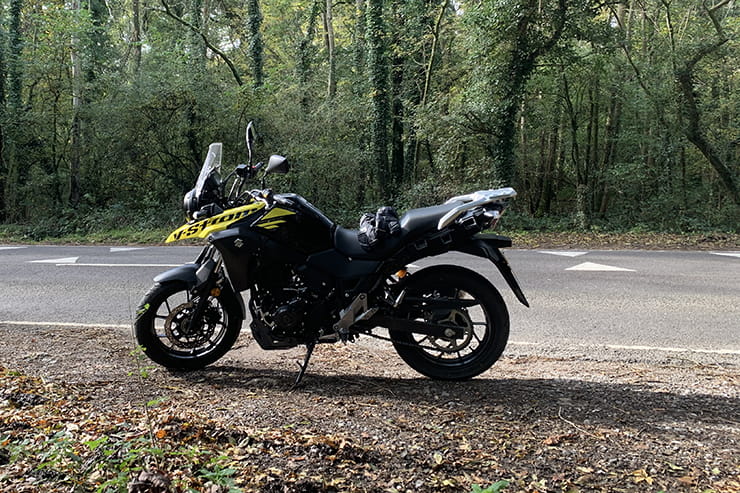 • mpg could be better