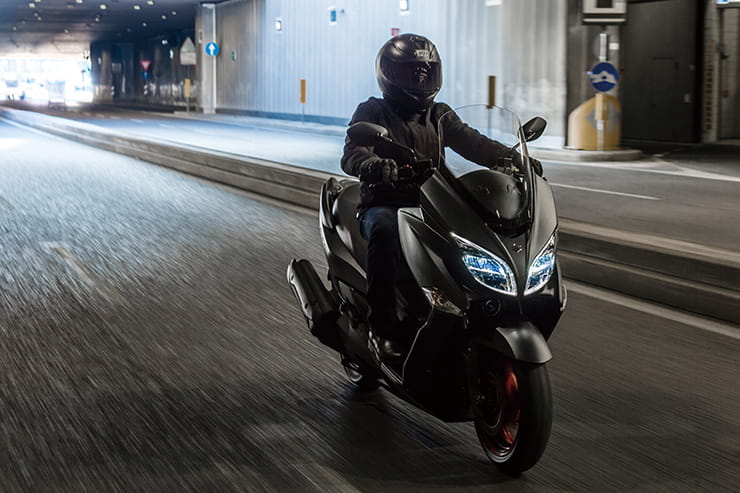 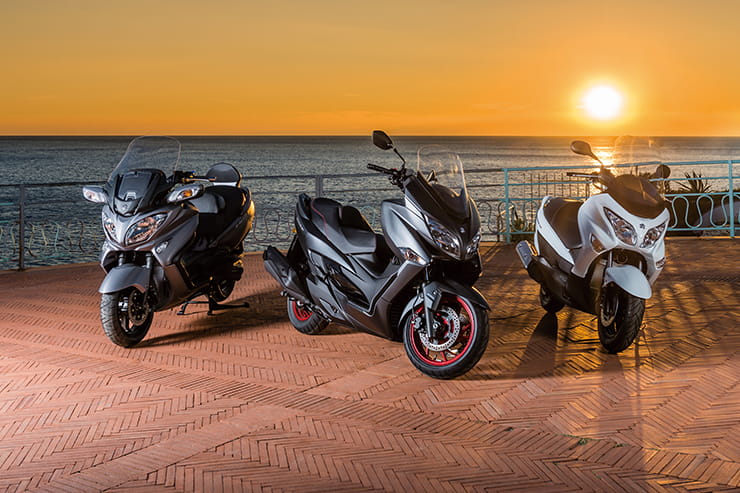 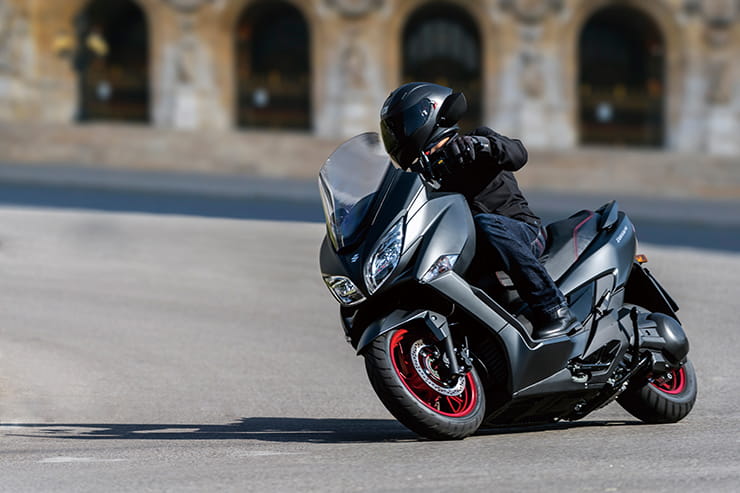 Maxi-scooters such as the Burgman 400 split opinions with UK riders. While in Europe they are a much-loved form of urban transport, in the UK many riders tend to look down their noses at these inflated scooters, which is a shame as those same riders are missing out on what is actually a brilliant form of city transport. Packing a massive 42-litre underseat storage compartment as well as two front compartments (one of which has a 12-volt DC outlet) the Burgman 400 can happily (and dryly) accommodate all of your commuting luggage and when you also throw in loads of weather protection, a comfortable seat and good fuel economy it all adds up to the perfect commuting companion. Even more so if you decide to swallow your pride and wear the obligatory scooter apron...

Burgman 400s have been around since 1998 however the updated 2017 model is significantly improved when compared to previous generations. Prices start at just £1500 for a very early bike but if you want the 2017 model you need to look at paying around £4000 in a private sale or £4500 from a dealer, which isn’t that much off the current RRP of £6599. There doesn’t tend to be that many pre-registered Burgman models, however you can get ex-demo 2019 bikes for as little as £5500, which makes them worth considering as they generally only have about 1000 miles on their clocks and aren’t that much more than a used 2017 bike.

The Burgman’s single cylinder engine is pretty basic but it does all that is required and makes a reasonable 31bhp with 26.6lb-ft. As it is a ‘twist-and-go’ scooter you don’t really need that much in terms of top speed (it will do an indicated 90mph) and instead it is the zip away from traffic lights that is more important. On this score the Burgman will easily out-drag any cars/bicycles/busses it meets, so you can’t complain. That said, taking a pillion does hamper its performance quite noticeably.

Due to its fairly basic nature the Burgman’s single cylinder motor is a solid and reliable unit that requires oil changes every 3500 miles and final drive oil swapped at 7500 mile intervals. The CVT belt change is at 14,500 miles and is the biggy to watch out for however in reality it seldom needs changing at this interval and may owners do their own home maintenance to save costs. The CVT system is very robust and owners seldom report any major issues in terms of the Burgman 400’s transmission. That said, corrosion can be a worry so always have a good look behind the fairing as exhaust studs can rust and that makes replacing the system a bit of a lottery that will probably involves stripped threads... 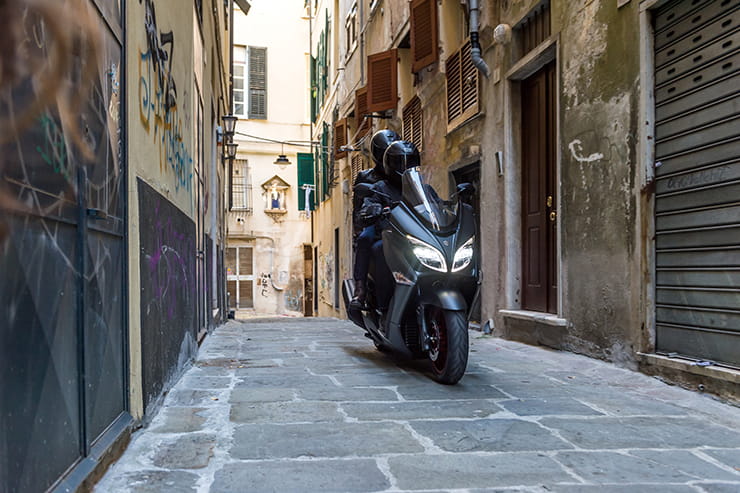 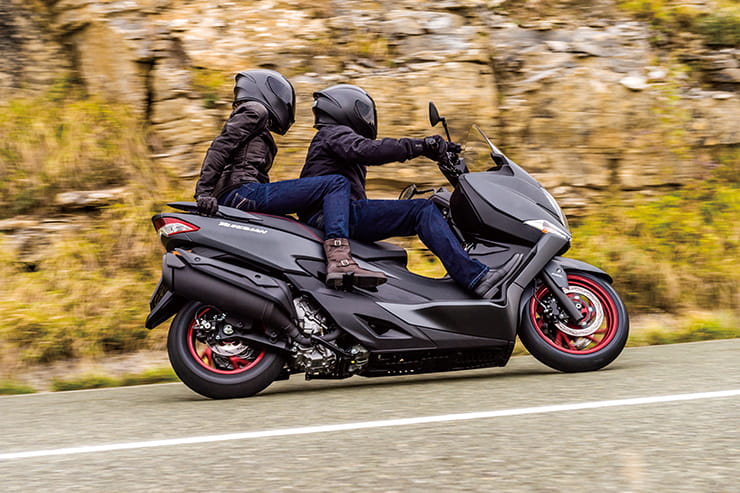 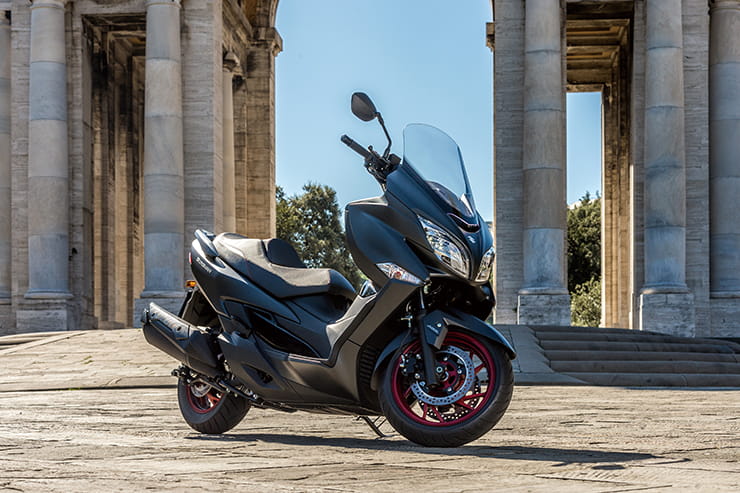 Suzuki claim 65.7mpg as an average economy figure for the Burgman but in reality this is more likely to average out into the mid-50s when used on a variety of roads and not just an urban environment. That still equates to a range of over 160 miles from its 13.5-litre tank, so it isn’t all bad news.

Somewhat oddly (if you are used to conventional motorcycles) the Burgman runs a 15-inch front wheel (up from the previous model’s 14-inch for better stability) with a 13-inch rear. They are both shod in fairly fat tyres and when you are out and about you don’t really notice the miss-match in wheel sizes. Certainly not as sporty-handling as rivals such as the Yamaha XMAX 400 or the BMW C400X, the Burgman is more aimed at providing a solid and relaxed commuting platform and that means it is slightly more ponderous in the bends and its suspension set fairly softly. While you can up the rear preload by 7-stages to reduce this slop, the forks are non-adjustable so you just have to deal with it and to be fair on a commuter comfort should take precedence over the ability to whip through bends. One of the Burgman’s selling points has always been its practicality levels and you get a huge 42-litres of underseat storage that Suzuki claim is big enough for two lids (one full-face, one open-face) or to stow away all your riding gear when you reach your destination. Add to this two front compartments (annoyingly neither is lockable), one of which has a 12-volt connector and it is ideal for urban use. Tipping the scales at 215kg the Burgman feels considerably lighter thanks to its low centre of gravity and reassuring 755mm seat height as well as the more cut-away footboards the 2017 model features, which help make the seat height feel even lower by reducing the effective distance your feet are from the ground.

You can’t expect too much from a scooter’s stoppers and the Burgman’s basic two-piston sliding calipers do all that is required and have a basic ABS system as standard. They are perfectly adequate, but much like its lack of electronic assists, some rivals boast far fancier calipers... Watch out for corrosion on the calipers’ sliders but don’t get too hung up on this as they are very cheap and easy to rebuild. Pleasingly there is a parking brake on the Burgman, just check it isn’t seized as some riders never use it. 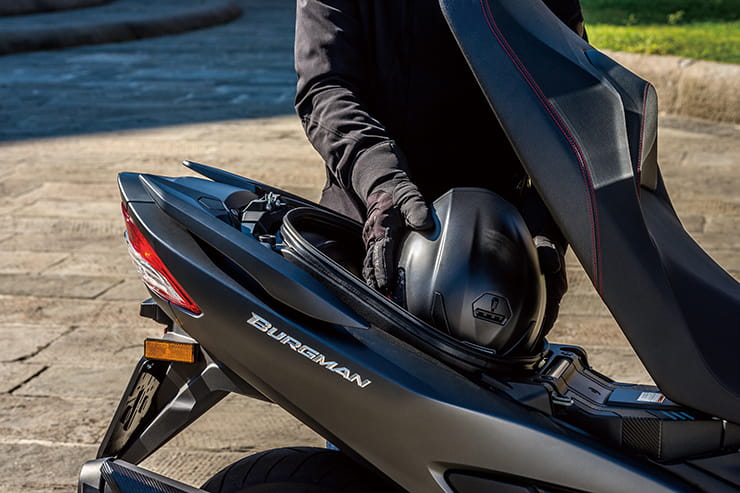 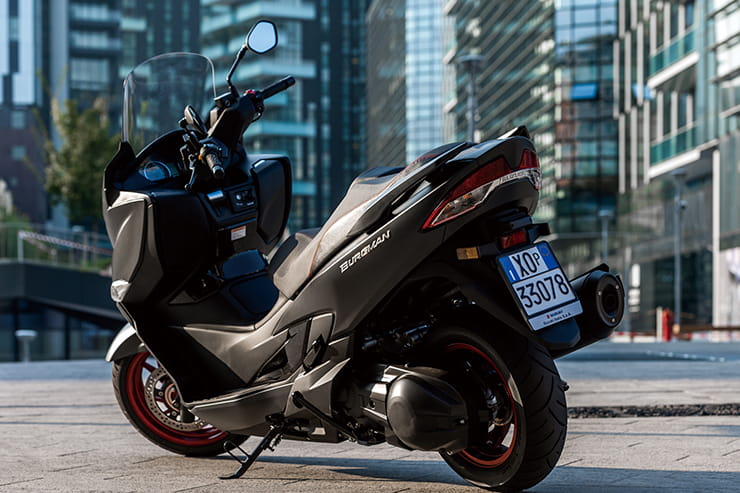 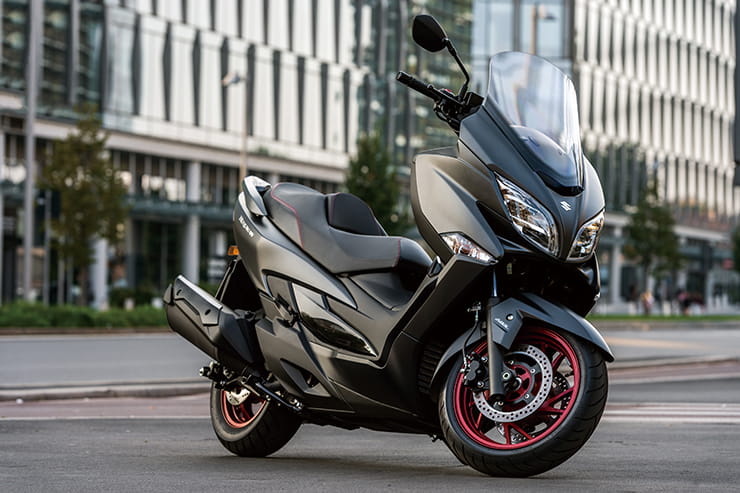 In Europe riders often go touring on maxi-scooters, something that isn’t as prevalent in the UK. Add a taller screen and a top-box and you can certainly cover distances on the Burgman, it’s just not see as ‘the thing to do’ by UK riders. It is also worth noting that the updated 2017 bike’s seat has 20mm thicker padding than before...

The Burgman gets ABS as standard but that’s it aside from an immobiliser and a clever ‘chain lock gate’ which allow you to secure it using a bike lock through the frame itself. In terms of official accessories, you can add heated grips (£349), knuckle guards (£194) and a taller screen (£216) while also boosting its practicality through a top-box (£246 plus £170 carrier plate). Aftermarket firms sell a variety of accessories but the most popular for commuters is a scooter apron, which although stupid looking keeps you wonderfully sheltered from the elements.

The Burgman 400 is a decent mid-price scooter that is a great commuter thanks to its excellent comfort levels and storage space but lacks the feeling of quality or clever electronic assists you get on pricier rivals such as the Yamaha XMAX or BMW C400 models. As an urban workhorse, however, it is hard to fault.

Three things we love about the Burgman… 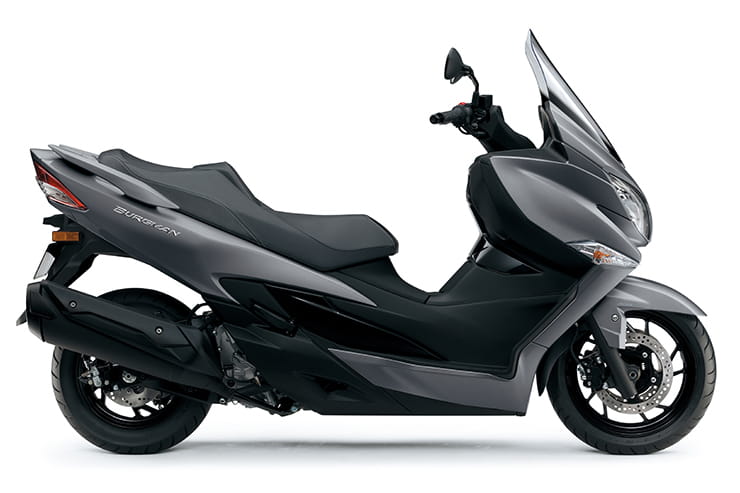 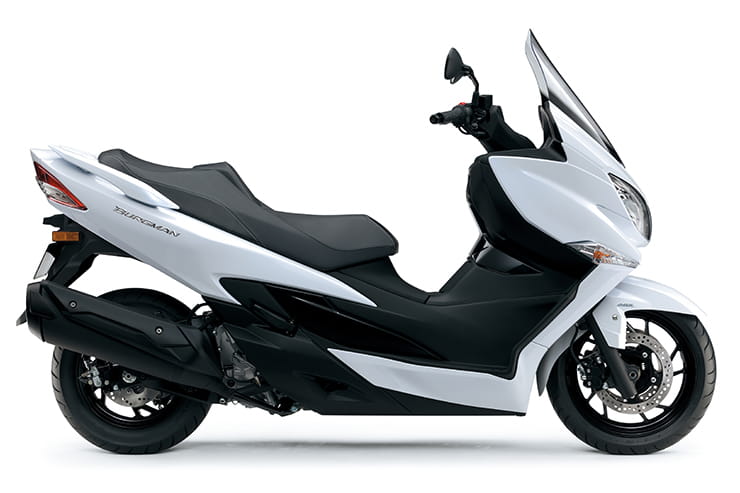 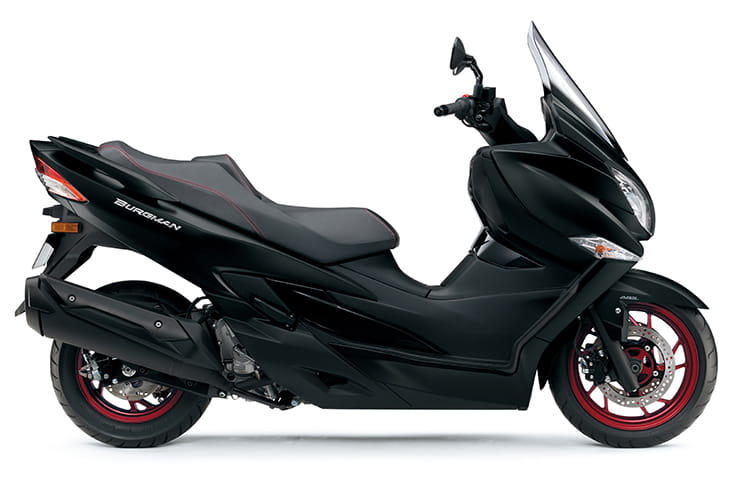