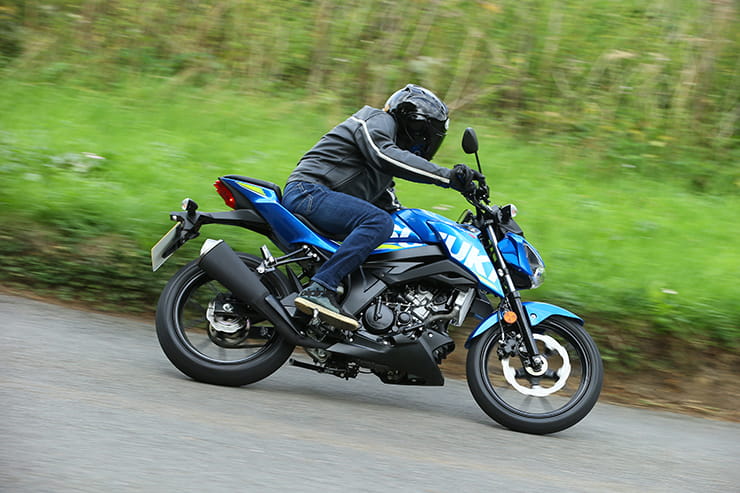 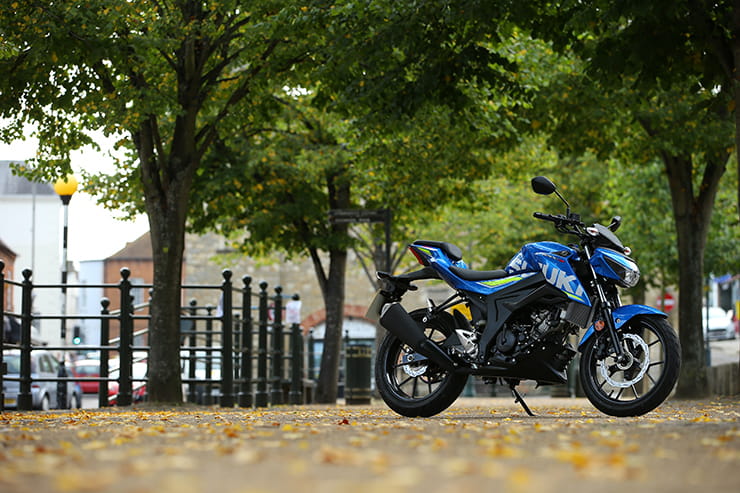 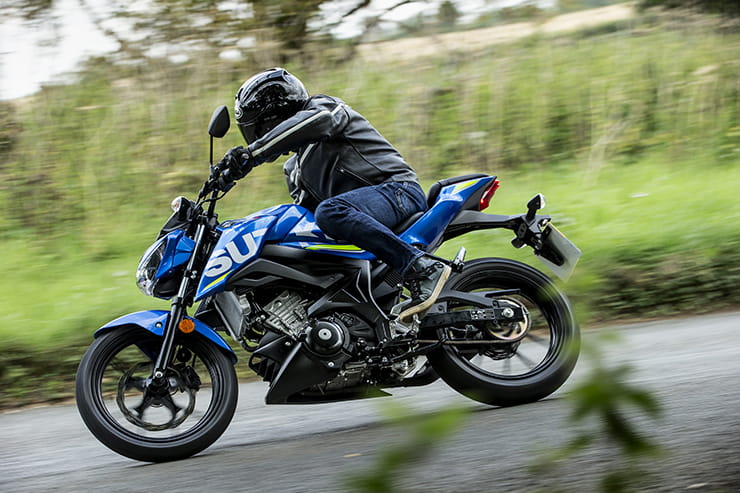 When it comes to 125s, although race reps look the coolest it is naked bikes that tend to sell better (aside from cheap Chinese race reps), as the top selling KTM 125 Duke continues to demonstrate. So, when Suzuki (finally...) entered the 125 segment in 2017 with their all-new GSX-R125, the reality was that its naked sibling the GSX-S125 was more likely to clear from showroom floors. Effectively the same bike as the GSX-R but minus its fairing and with a set of flat bars fitted, the GSX-S125’s main selling point was its light weight rather than its level of tech. Not exactly a bike to set your pulse racing visually as it lacks eye-catching features such as inverted forks or a radial brake caliper, the GSX-S tips the scales at just 133kg wet, making it the lightest in its class and therefore boasting the best power-to-weight ratio as it produces the maximum 14.8bhp allowed for an A1-legal machine. A solid performer with a recognised brand name on the tank, the GSX-S remains in Suzuki’s line-up (it was made Euro5-compliant in 2022) and if you are after a workhorse 125 rather than one to show-off on, it’s not a bad option.

In 2017 the GSX-S125 cost £3699 (plus £100 if you wanted the cool MotoGP blue paint scheme), which made it cheaper than the KTM 125 Duke, Yamaha MT-125 and Aprilia Tuono, which were its main ‘premium manufacturer’ rivals. Nowadays its price tag has crept up to £4199 for a brand-new bike but you can get deals on pre-registered or very low mileage bikes that see this dropping to about £3800. If you are on a budget there are a few cosmetically damaged insurance write-offs for sale in the £2000 region, but you are better off spending £2500 on a decent medium-mileage (about 8000) example in a dealership. If you go private prices start at about £2200 for one you would want to own.

As the motor is restricted to a learner-legal 14.8bhp you can’t expect too much but the DOHC four-valve motor has a reasonable spread of power and it is pleasing that Suzuki have done things such as give it a big bore/short stroke design, SCEM (nickel-phosphorus-silicon-carbide) plated bore and high-performance piston and rings to allow it to rev quickly. On the go it is quite a rev-happy engine, but the power is well spread access the rev range and it is fairly vibe-free, which is good. It makes a learner-legal 14.8bhp with 8.5lb-ft of torque and that’s all you can ask for, aside from a flashy VVT system such as the Yamaha YZF-R125 has...

As the GSX-S is relatively new there are no reported major issues from the engine and to be honest, we would be surprised if there were. It may be a new motor, but a four-valve DOHC liquid-cooled 125 isn’t exactly out of the ordinary for Suzuki or likely to push their designers too hard! The GSX-S has recommended service intervals of 4000km (2500 miles) which involves an oil change and valve clearance check (the spark plug lasts 8000km/5000 miles) so will set you back about £200. There aren’t many high-milage GSX-Ss out there, but owners report the clearances don’t often require altering, however if they do that will add about £50-100 to the bill. The six-speed gearbox is also solid and pleasingly slick however owners report that the OE exhaust can rust quite quickly if exposed to winter salt. A common fix seems to be sanding it down and spraying it with black heat-resistant paint, which does the job. If you want a more permanent solution, an aftermarket system costs from just £150! Generally, as long as there is a reasonable service history that suggests the previous owner cared for the bike you can buy with confidence as the bike is fairly new. 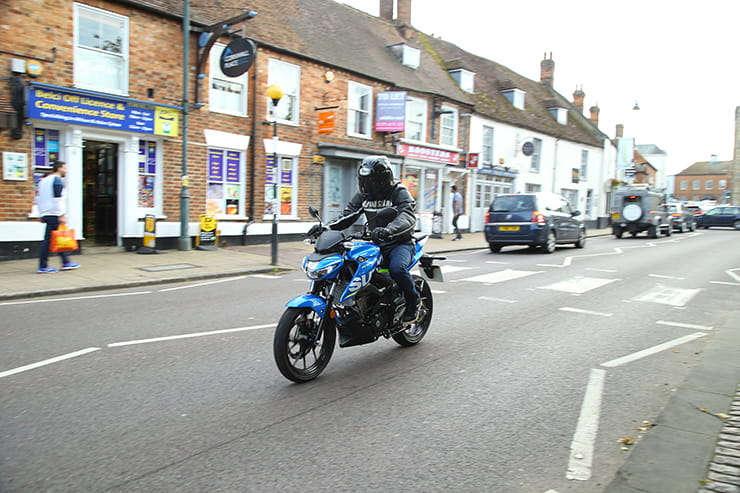 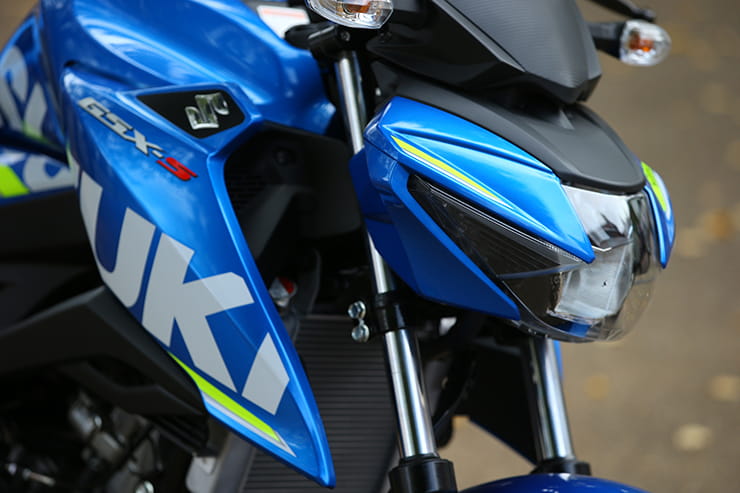 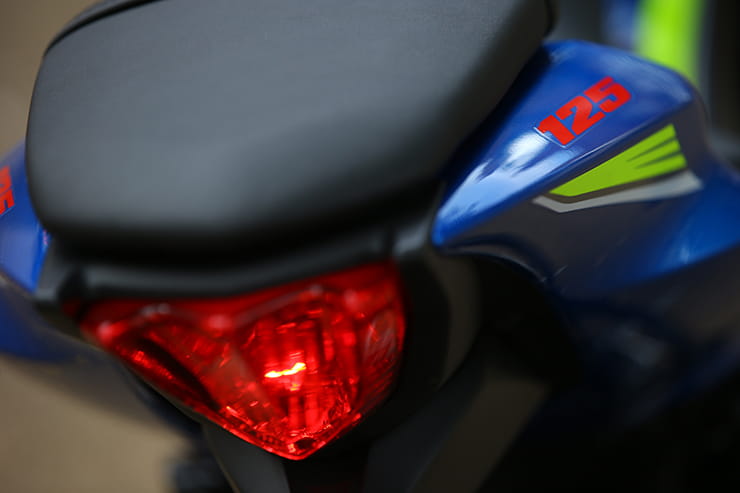 Suzuki claimed the GSX-S125 would record 122mpg, which is very impressive indeed. Ok, when you are riding it in a ‘real world’ situation this is generally closer to 110mpg as it does spend a lot of time flat out but that’s still not to be sniffed at and you can expect to get around 250 miles from its 11-litre fuel tank.

Suzuki made a big play on the GSX-S125’s (and GSX-R125’s) handling and you have to hand it to them, it’s an agile little bike. The chassis, which is identical between models, is pleasingly sporty and the riding position comfortable for taller riders. As is so often the way the OE Dunlop tyres aren’t great, but this is easily (and fairly cheaply) sorted and then you can explore the GSX-S’s sporty side with a greater degree of confidence in all weather conditions. Although the suspension is pretty basic and non-adjustable it does the job and there are great features such as a huge 40-degree turn of steering both left and right making U-turns and filtering in urban areas a breeze. As is (sadly) so often the way with Suzuki’s lower end models the quality of finish leaves a bit to be desired and owners moan on forums about corrosion on exposed areas, which is a real shame. When buying used, always check the bike very well for crash damage and insist on a HPI check to ensure it hasn’t been written-off by an insurance company – a few have been.

Visually the GSX-S’s stoppers are disappointing. Suzuki may have tried to dress them up a bit with wavy discs front and rear but the two-piston conventionally mounted front caliper scream ‘budget bike’ where a radial item would have added a dash of sex appeal. That said it performs ok and an ABS system is good to see on a 125 as some more budget bikes simply rely on linked brakes instead. If the bike has been ridden in winter, there is a chance the caliper may be sticking slightly on its slider but this is an easy fix even for a home DIYer and if it’s anything more drastic a complete caliper rebuild kit is less than £30. 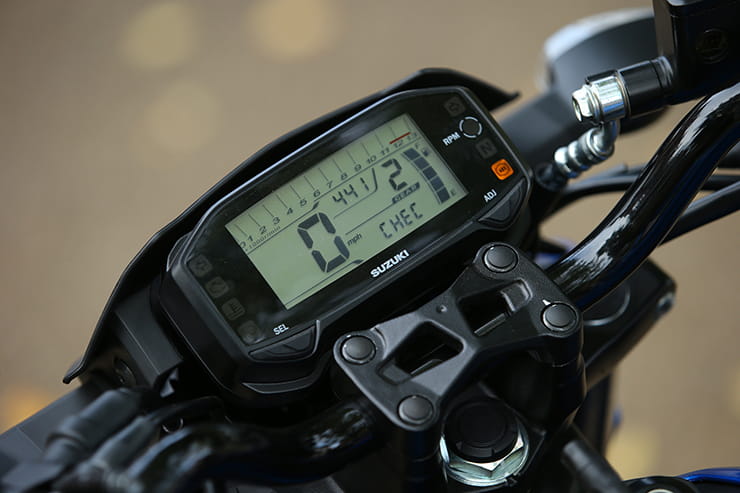 Distance riding isn’t really on the GSX-S’s radar, this is a city bike and although some do fit a taller screen, in reality there isn’t much point. If you do a lot of straight-line riding, the faired GSX-R125 may be a better bet as its riding position isn’t too sporty and its bars only 100mm lower.

The only rider assist the GSX-S gets is ABS, however you have to hand it to Suzuki they have attempted to add a few helpful and practical additions. You get a rear hugger as standard alongside Suzuki’s shutter-key lock system, which is basically a metal flap that covers the ignition to help prevent theft. The LCD dash has a fuel gauge, clock, and gear indicator, which is good to see, and also an oil change reminder. The reminder is set at 1000km (620 miles) as default but can be upped in 500km intervals (310 miles) from 500km to a maximum of 4000km (2485 miles).

In terms of accessories, Suzuki sell a ‘Street Accessory Pack’ that consists of a pillion seat cover, small tank bag, tank pad and heel plate protection kit for £300. The pillion seat cover can be bought separately for £57 (colour matched) and there is also a graphics kit (£57 and, selection of protective stick-on covers. The tank bag is £95 plus a £39 fixation ring. Aftermarket firms sell a lot of kit for the GSX-S ranging from screens, exhaust end cans (or full systems), crash protection and tail tidies. A lot of it is Far Eastern-sourced, so be a bit picky about what you fit as quality can be a touch suspect.

The GSX-S125 is like so many of Suzuki’s models, solid performing but a bit underwhelming in terms of its spec and kerb appeal. If you are after a lightweight city 125 it ticks most boxes and is reliable and very easy in town. However, when you park it up next to a 125 Duke it does look a bit drab, which is a shame. If you are happy with its looks the GSX-S125’s performance won’t disappoint but it also won’t make you stand out from the crowds and could, name on the tank and cool MotoGP paint aside, easily be mistaken for a Chinese-branded model.

Three things we love about the GSX-S125… 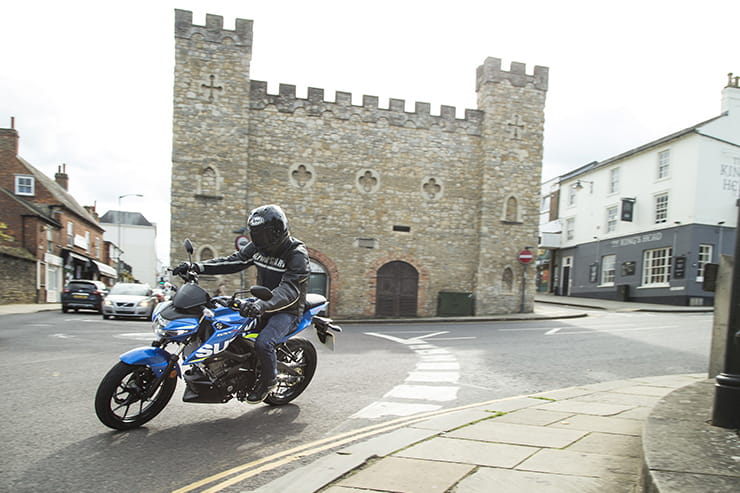 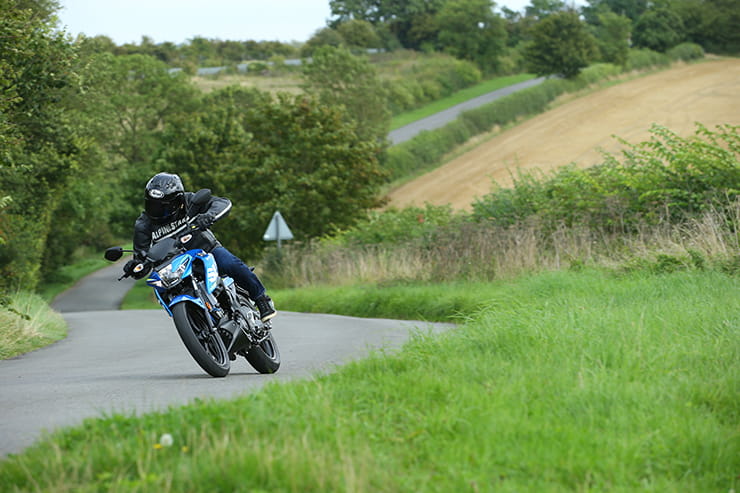 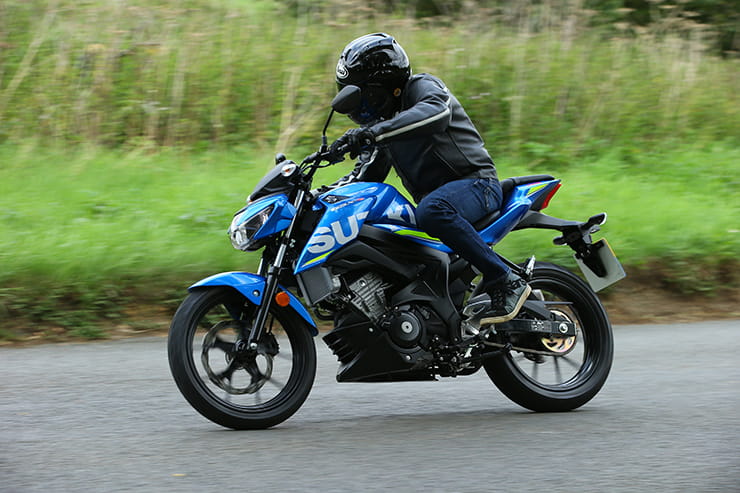 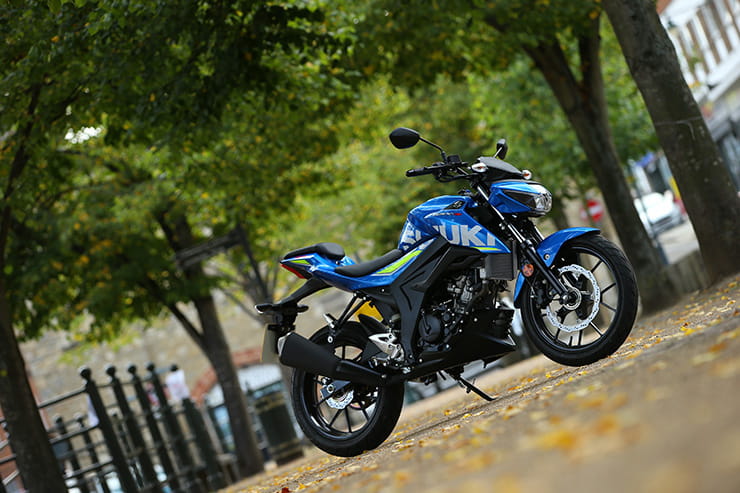