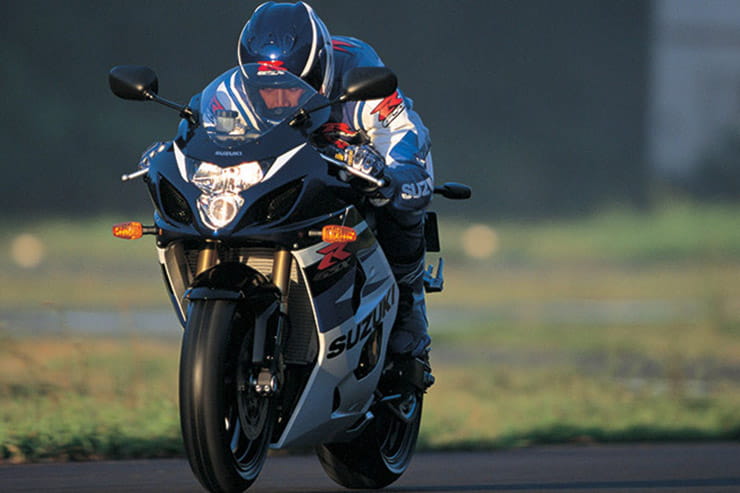 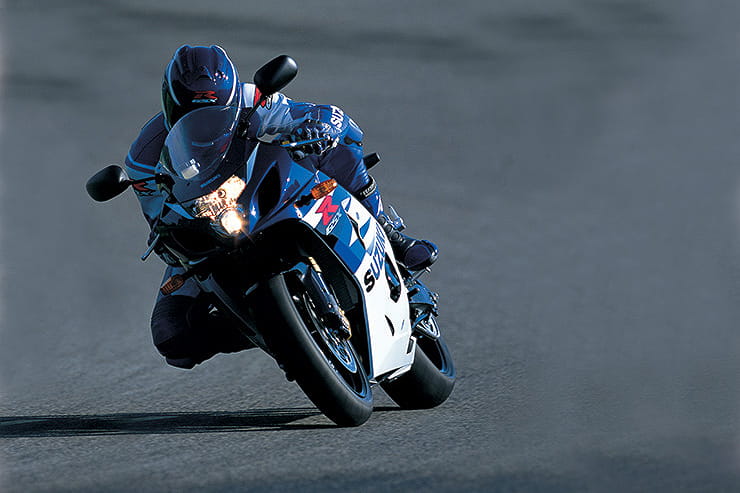 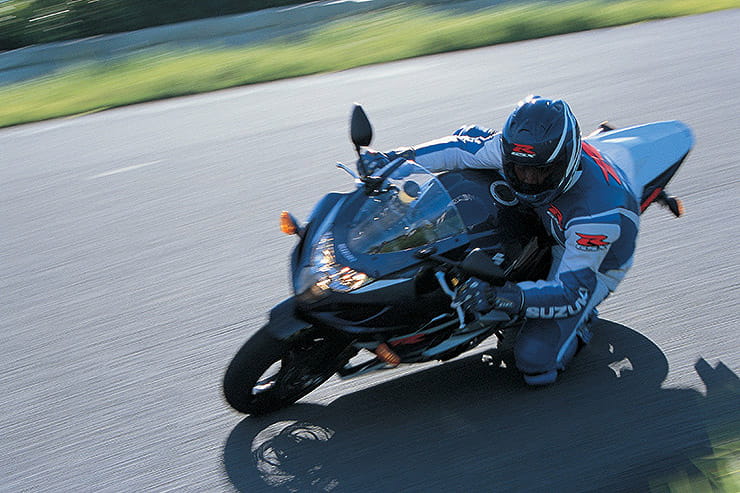 There is something very special about Suzuki’s iconic GSX-R750 model due to the way it blends the best handling attributes of a supersport 600 with the useable section of the power from a litre bike to deliver a really wonderfully balanced sportsbike. And when you are looking at the GSX-R generations, the K4/5 does stick out as probably the best of the bunch in terms of its overall blend of performance, practicality and handling. Not only that, it also represents pretty good value in the used market. There are very few ‘analogue’ bikes that are as intuitive and fun to ride as a GSX-R750 K4/5, is it time you tried one out for size?

Suzuki sportsbikes don’t tend to hold their value that well in the used market, mainly due to the firm’s ‘stack them high, sell them low’ philosophy which harms residual values. Not only that, they do have a reputation (which it has to be said is often deserved) for slightly dubious build quality. If your budget is tight, a well-used GSX-R can be found for £3000-3500 but you are better off spending close to the £4000 mark for a mid-teens mileage example. The K4 and K5 have very little difference in price and while some sellers try and stick a few quid onto the price of a K5 ‘Anniversary’ bike, they are pretty common so don’t pay over the odds. If you set the bar at £4500 you can have an absolute beauty of a GSX-R750 and at this price it can certainly be an Anniversary model if you so choose. And you should leave with a few quid left over in your budget to spend on sticky tyres as well.

The trump card of the GSX-R750 has always been its engine and the 749cc inline four really is a cracker of a motor. Yes, it’s a bit noisy and rattly but that’s just GSX-R for you, what makes it special is its power delivery. Blessed with a sublime throttle connection, the K4/5 has a lovely meaty mid-range that when the needle starts to rise transforms into a proper screamer of a top-end rush that is only enhanced by the bike’s wailing airbox. A fabulously flexible engine, it can be ridden gently or thrashed to within an inch of its life and you never feel like the bike is getting ahead of you or intimidating you in the way a litre bike’s performance can. There is more than enough power to thrill but with the 750 you can actually go full throttle and feel like you are using a large proportion of its power rather than being too scared to really scratch the surface. If the bike feels lethargic, the T-bag fuel filter in the tank is probably blocked up, which is an easy swap.

Despite often sounding like a bag of spanners, the GSX-R750’s engine is actually very reliable and when it comes to major failures they are mercifully few and far between. You need to be pretty abusive to make one misbehave and even track use isn’t too much of an issue, although as this model lacks a slipper clutch track bikes are best avoided. The main worry when buying a used GSX-R comes from sensor or gearbox failures, which are quite common. Second and third gear are weak on the GSX-R and if a quickshifter is fitted their life is shortened even more, so avoid any bikes that have a ‘shifter and always check there are no false neutrals or that the bike hops out of gear under load during a test ride. This generation (before a slipper clutch came fitted as standard) has the slickest gearbox of any GSX-R so if it isn’t nice and smooth be suspicious. The fuel-injection system has a throttle position sensor which likes to fail and it can be tricky to replace as it needs careful setting up, so always look for an ‘Fi’ warning light on the dash or a C28 fault code (the secondary throttles’ stepper motor can also fail, which is very costly to fix) and ensure the bike ticks over nice and smoothly. Nearly every GSX-R will have an aftermarket exhaust fitted, it’s just one of those bikes, so see if the bike’s ECU has been re-mapped to suit or a Power Commander fitted. And if you are planning on a trackday, remember that noise limits are starting to be very harsh indeed so an OE can is always worth having included in the sale. If you are buying an Anniversary bike, check it has the correct Yoshi can fitted as these were unique to the model and are marked as such. 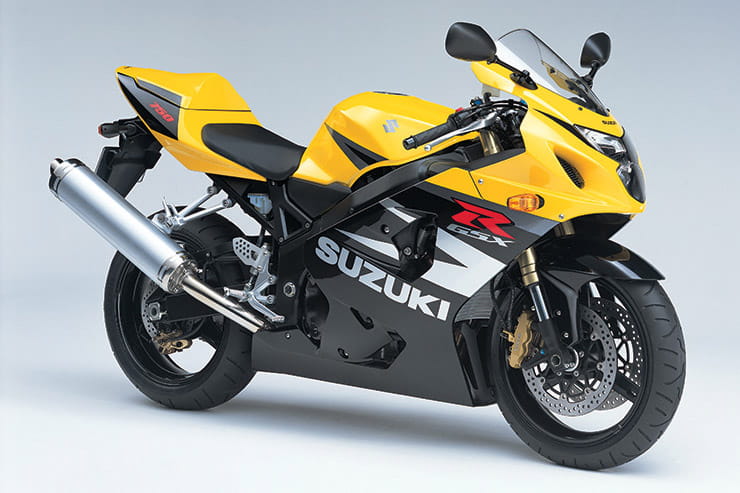 The GSX-R isn’t bad in terms of economy and you can expect to record figures just short of 40mpg during general riding. Stick it on track and this will reduce but what do you expect?

One word sums up the GSX-R750 K4/5’s handling – balanced. The chassis is effectively the same as the GSX-R600’s and that means you get a really agile bike that loves to be thrown on its ear and yet is totally stable under acceleration. Suzuki really know how to make a confidence-inspiring road bike and the GSX-R750 is no exception and thanks to the fact the motor has enough power but not too much, you can really start to trust and push the chassis and safely explore the limits of the fabulous front end. With fully-adjustable suspension front and rear (which will probably need a service by now, so check all is well) a bit of time spent twiddling the adjusters can work wonders and on the road or track a well-ridden GSX-R750 is a hard act to beat. Be very cautious about any bikes that have been thrown into a gravel trap, so look for gravel-rash, and also watch out for a miss-aligned rear wheel. The GSX-R’s swingarm can flex when you tighten the axel nut, causing the chain to become over-tightened. Also, never trust Suzuki’s alignment marks as they are generally miles off! Sadly at that this point we need to mention the GSX-R’s finish, which is a bit poor. Fasteners often seize into position and exposed metal corrodes while the paint on the tank and wheel rims is pretty thin – if it looks good, and many don’t get ridden through the winter, use lots of anti-corrosion spray to keep it this way! 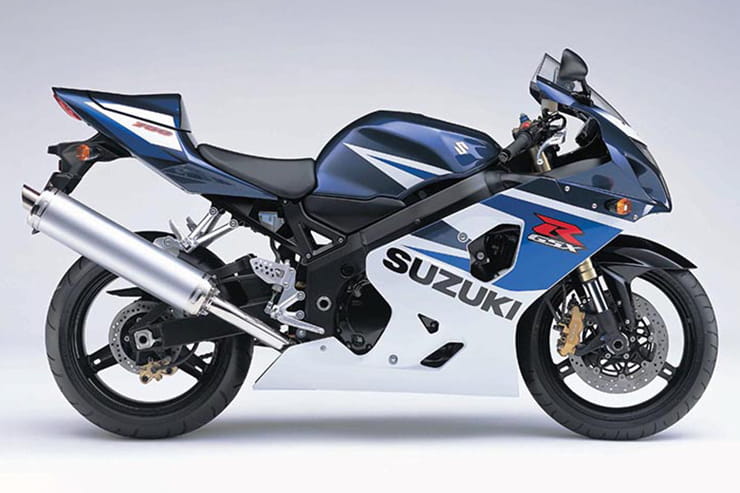 The Tokico four-piston radial calipers with a radial master cylinder were a new addition for this generation and are ok in their performance, only let down by fairly crap OE pads, which by now will have probably been updated. A set of braided lines make a world of difference but watch out for warped discs as they are quite a small diameter (300mm) and do overheat if used hard on track.

One of the physically larger sportsbikes, the GSX-R750 is quite roomy and makes for a moderately relaxed sportsbike that can cover miles. A taller screen makes a big difference but if you want to take it touring you certainly can without having to pre-book an osteopath in anticipation for your return home.

You get a shift light (which is programmable) but that’s it in terms of rider assists – no ABS, no traction control and not even a gear indicator – analogue motoring at its very best. In terms of accessories, a taller screen, rear sets and an exhaust are all fairly acceptable however a lot of riders hit the aftermarket catalogue hard and stubby levers, tail tidies, mini indicators and the likes are all fairly common. If possible, go stock. And watch out for quickshifters. In 2005 Suzuki celebrated the 20th anniversary of the GSX-R750 by releasing a ‘special edition’. The bike gained a Yoshimura exhaust can, custom paint scheme, new grooved discs, blue seat and a special plaque on the top yoke. The blue chain is best not mentioned… It’s the pic of the bunch as the retro paint scheme is very cool. 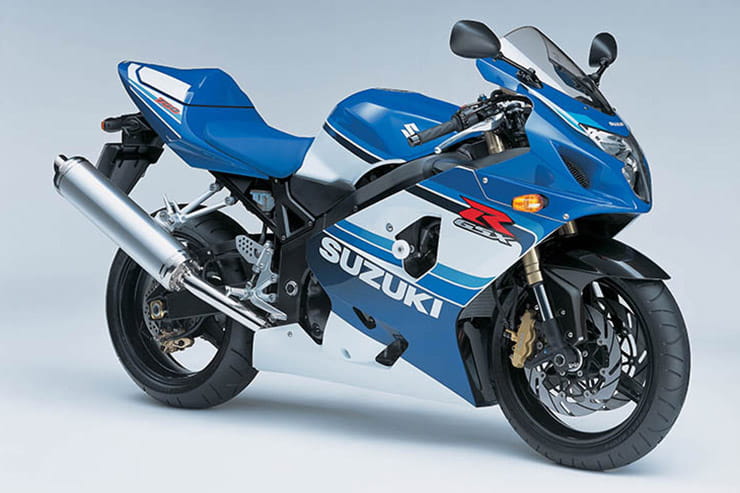 If you want a road bike to ride hard and thoroughly enjoy, try a GSX-R750 K4 or K5 out for size. At roughly £4000 it represents great value for money and is also just about at the point that you can take it on track and not worry too much about the financial or cosmetic consequences if it does go wrong. Should you do this you will discover a bike that flatters your riding ability while gently encouraging you to try harder thanks to its wonderful chassis. A real class act of a bike that feels thoroughly developed and built to be enjoyed.

Three things we love about the GSX-R750… 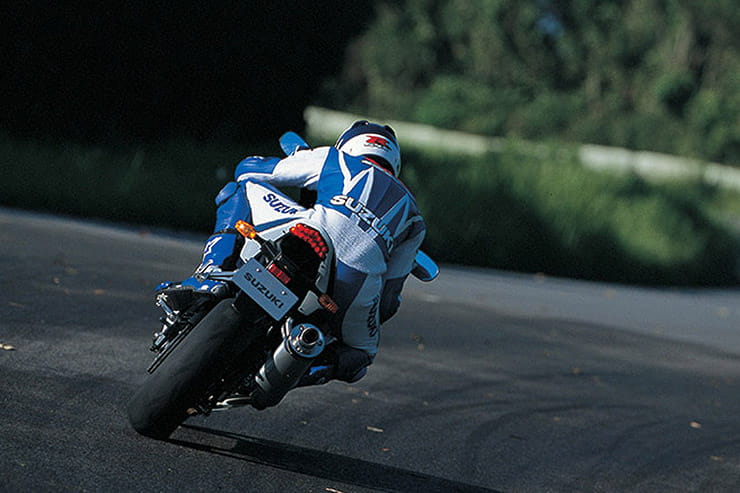