Silverstone, Northants, Wednesday, June 15, 11.45am: “Place your passport, credit card and your house keys down here”, laughs Bennetts Suzuki BSB team owner Martin Halsall as his team shows me through the £70,000, 217bhp Suzuki GSX-R1000 I’m about to ride.

Silverstone’s full 3.19-mile GP circuit is in front of me, and I’m about to shake-up the Bennetts Ultimate Track Day with a few laps on a pukka full-blown BSB bike.

The bike needs at least 45 minutes for the tyre warmers to get to work before we can ride it, and a proper warm-up procedure. But now it’s ready for me to unleash the 217bhp Suzuki’s in-line four-cylinder power. Well, at least some of it. The team joke about how long I can actually spend on full throttle… 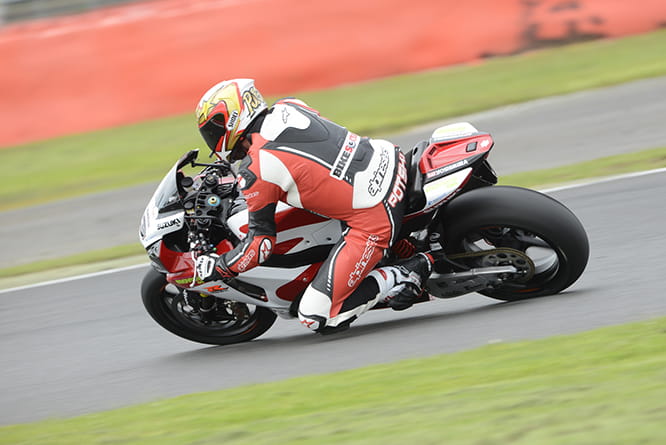 I’m riding the very same bike that Ryuichi Kiyonari campaigns in the MCE British Superbike Championship. And the very same spec bike that Tommy Bridewell was riding to fastest in first practice at the Snetterton BSB test exactly as I put on my lid last week.

The base design of the current 2016 Suzuki GSX-R1000 may be the same as it was back in 2008, and it may be getting replaced next year for an all-new model. But, in this spec, with the best knowledge and skills of Halsall’s experienced team, plus Yoshimura’s finest development engineers and parts can squeeze out of it, it’s one of the fastest and best GSX-R1000s you’ll ever get to ride.

The gearbox is set to a race-shift pattern, so one-up, five down and the rear brake pedal is disconnected. It all looks right with everything in place as Kiyo wants it to stay (the team said they’d take it off but Kiyo said no), and his foot actually uses the lever even though it’s not connected up. There’s a thumb brake on the bars too to help with wheelies. 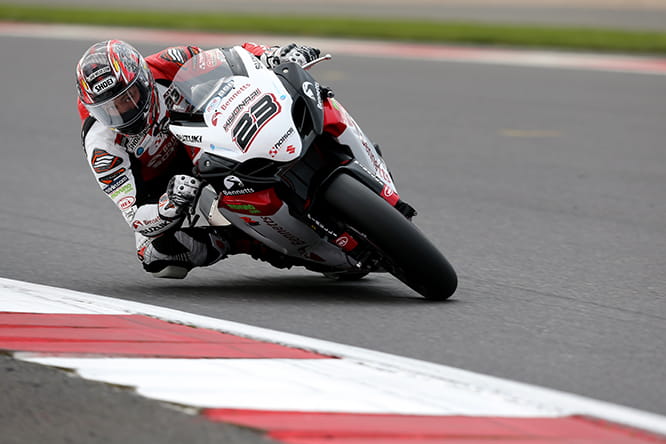 The fuelling is set to engine map 1, the tyre warmers are whipped-off and we’re pointing down pit lane riding through the garage past bemused track day riders.

Look out track day riders, there’s a nervous 6ft 4” man and a BSB bike coming through…

The rules introduced in 2012 may have stopped the big, bad electronically-controlled Superbikes of old, but compared to standard road-going sports bikes they’re still something else.

Everything on a pukka race bike like this feels stiff and accurate. Ride a road bike, even a really good track day one like a Yamaha R1, or Ducati 1299, and everything feels soft and loose compared to a well set-up road bike. Their compromises mean they have to be as good on a B-road as they are on a track day. With a BSB bike there’s no compromise. From the gear change to the pressure on the brake lever, everything is right.

On this GSX-R everything serves a purpose of making the bike go faster than before. The frame is rebuilt and braced, the swingarm is stiffened up, the gearshift is pinpoint accurate and the suspension (K-Tech front and K-Tech rear shock) is some of the best, most supple feeling suspension on the limit you will ever find. Just look at how many bikes in BSB run it, and how many TT bikes run it too.

Okay, so the spring was too soft for me (Kiyo weighs 70kg, I weigh 91kg), but everything else about it is simply the best Suzuki GSX-R1000 ever. And it wasn’t set up for me, I’m only meant to have a wobble round!

The whole bike set-up is all about sending messages to the rider, letting him (or her) feel the tyre and max the bike’s potential. Today, I’m no BSB rider, I’m a journalist. But I have been testing BSB bikes since around 1998 on and off right back from when Niall Mackenzie was on a purple Boost Yamaha and later when Hodgson and Walker were duking it out in BSB, so in theory I know what a good BSB bike feels like. 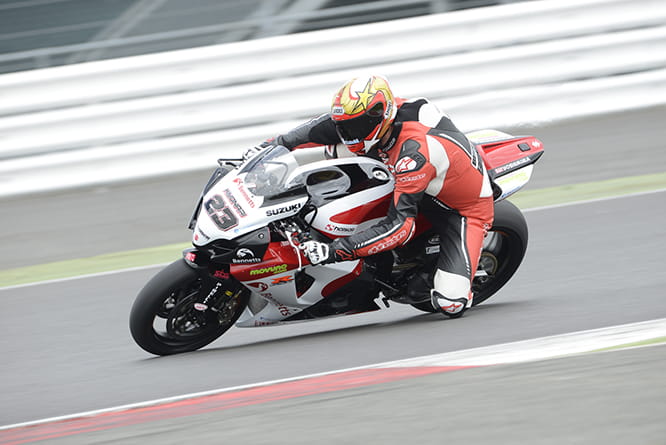 The Suzuki is jacked-up so high at the back compared to a road bike that at first it feels like it’s falling in to a corner. It’s not, it’s just so different to the long, low and relatively lazy road bike. Last year I followed Alex Lowes round the same track on a standard bike. The BSB bike is night and day. It’s so fast it leaves BMW’s mighty 200 (or so) bhp road-going S1000RR’s for dead, and where the standard bike is under-powered in current competition, the Bennetts Suzuki keeps pulling hard towards the shift light in every gear. Road bikes have caught up a bit on power, but they’ve still got a long way to go until they make this sort of power, and even with that spurt of power it’s smooth, the fuelling is spot-on and it’s so rideable.

But more than the power is the way the front-end and those Brembo brakes allow you to pin it, feel the Pirelli slicks flexing and get scared about how far you could lean over (if you weren’t being loaned someone else’s £70,000 motorcycle!). It gets in a corner so fast and then hugs the corner and holds a line way more than my upper body can cope with.

I know plenty of track day riders who reckon they could have a go at BSB. They can’t. I’m fairly handy on a motorcycle, but would struggle to make the grid for BSB. Even the rider at the back is a God.

The bikes are so stiff and demanding. There’s so much load on the brakes on your arms and shoulders, and such violence to deal with coming out of a corner without any traction-control that it physically demands more than riding on a 1000-mile tour in a day.

After six-laps I’m done, the bike is laughing at my feeble attempts to at least try and get to 100 per cent throttle and I hand it back to Martin Halsall.

It’s the ultimate track day GSX-R1000 weapon and I’m honoured to be allowed a go on it.

All being well and Kiyo is ready to come back from injury, you can see the bike racing (and his team mate Tommy Bridewell on the Bennetts Suzuki’s at the next round of BSB at Knockhill this weekend.

Massive thanks to team owner and all-round good bloke Martin Halsall and the Bennetts Suzuki BSB team who let me ride the bike. Cheers fellas. 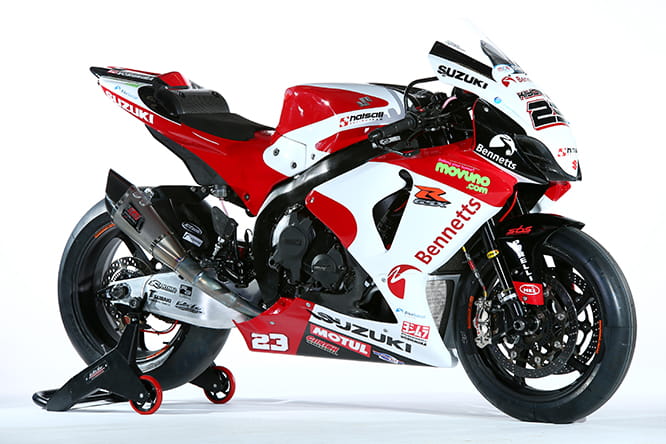 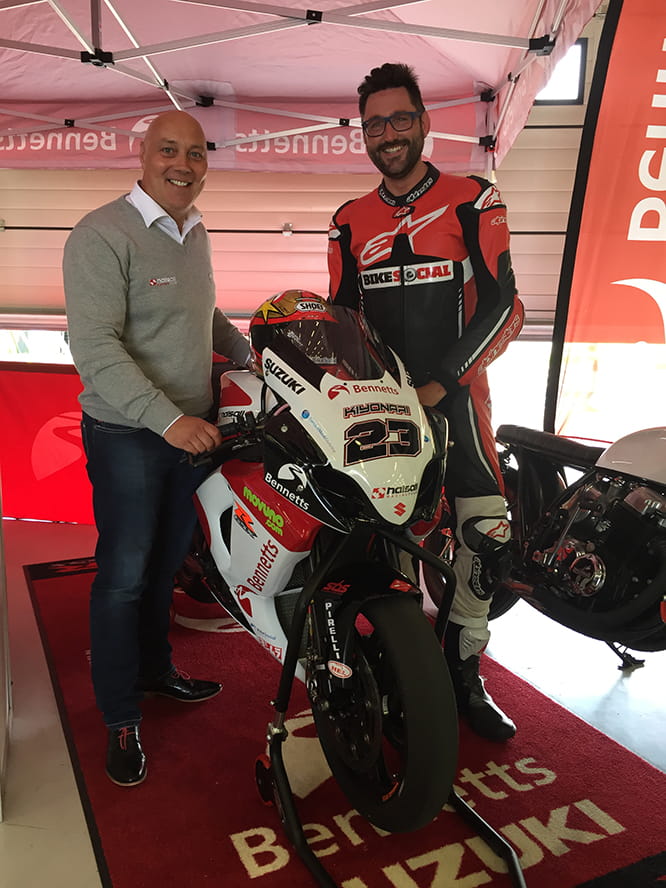