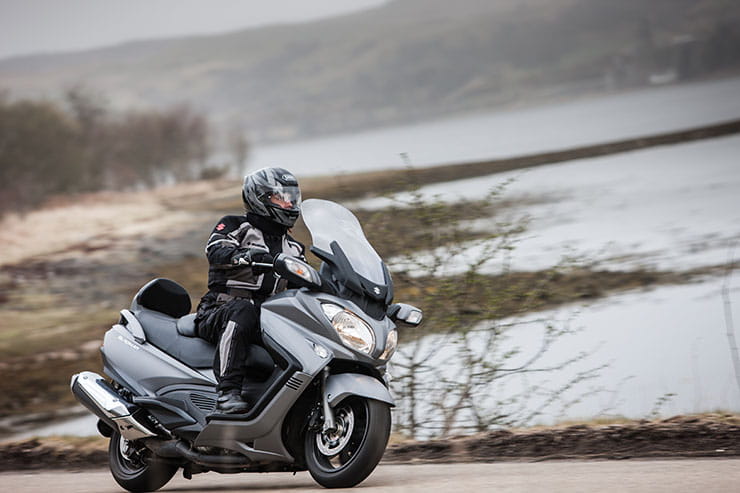 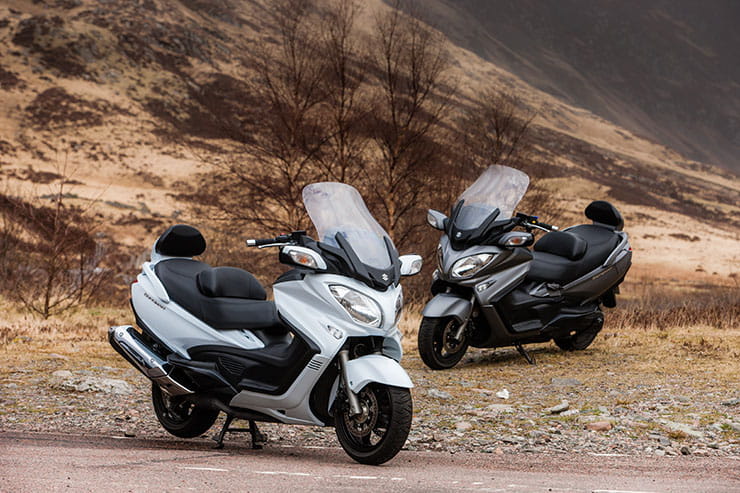 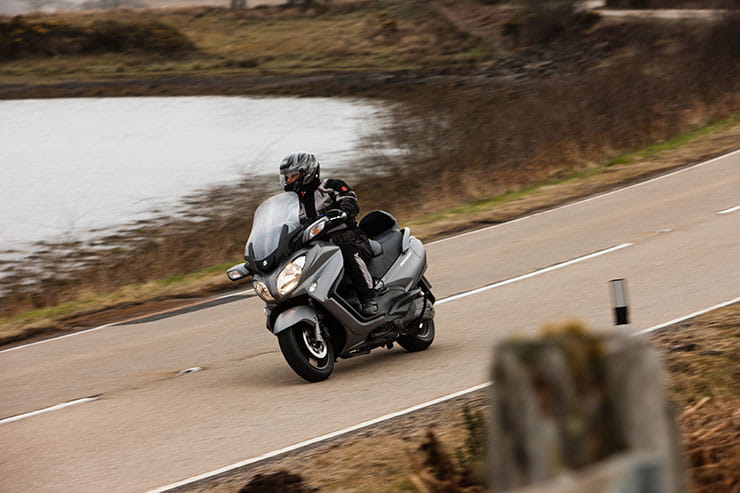 The chalk and cheese of the two-wheeled world, riders either love or loath maxi-scooters and if you are a hater there is nothing we will be able to do to change your mind. However, if you are prepared to give them a go, you will discover that maxi-scooters such as the Burgman 650 Executive are brilliant forms of urban transport that can even be used for touring! Brimming with practical touches such as heated everything, good weather protection and vast storage capacity, the Burgman is a more do-it-all commuter model where some rivals aim to add a bit of sporting excitement into their maxi-scooters. If you want a maxi-scooter to ensure you get to work ready for the day ahead (as long as you aren’t working from home!) the Burgman 650 is well worth considering. It’s not bargain basement cheap, but it is far more cost-effective and less stacked full of germs than a packed commuter train!

In the UK Suzuki stopped importing the basic model Burgman in 2004 and instead we only got the Executive model, which adds a bit of bling and is a better option for our roads and weather conditions anyway. Costing £8799 in 2013, the Burgman has held its price well as only about 100 are sold every year in the UK and a used one today will cost you between £4000 and £7000 depending on the year. There are a few insurance write-offs out there (mainly due to theft) but these are best avoided as they will be harder to sell on should you want to replace the bike. When buying used, always perform an HPI check to see if the bike has anything untoward hidden in its history.

With (at the time) the world’s largest scooter engine, the Burgman has reasonable amounts of power and you don’t really find yourself wishing for much more. The parallel twin was tweaked in 2013 to reduce drag and improve fuel economy and with the electronically over-ridable CVT gearbox it is a decent engine, especially in ‘Power’ mode. You can merrily zip around at 70mph and should you need to overtake you can drop a gear using the buttons on the switchgear to get a little boost of extra acceleration. Pulling away is slick and precise (as you would expect with a CVT) and it can even handle two-up riding. Overall, there isn’t much to find fault with.

The first Burgman 650 came out in 2002 and in ten years sold over 80,000 models, which shows how right Suzuki got it. With these fairly huge numbers in mind you would expect a few unreliability stories but the truth of the matter is that the Burgman’s engine is very solid. Some early model owners had issues with the CVT system but these were rare. In 2013 Suzuki kept the engine (which is rubber mounted to reduce vibrations and has a balancer shaft) virtually unchanged but did tweak it for better useability. Fuel economy was improved by a claimed 15% and transmission drag dropped by 35% through new valve springs and altered CVT and fuel injection settings, which are small but helpful updates. If you are buying used, the engine itself is solid (the 2013 bike has improved access for servicing through a helpful hatch) and as long as the 4000 mile service intervals (technically 4000 and 3500 miles) are kept to you should be ok. The valve-clearances need checking at 14,500 miles or four years and this is quite a biggy due to the fairing making access tricky and time-consuming. The CVT belt doesn’t require changing until about 50,000 miles, so this isn’t a huge worry and dealers don’t have a specified time for it being replaced, it is all done on assessment during a service – which is a good thing as it costs over £600 to swap! The exhaust was updated in 2013 to meet emissions regulations (Euro3) and isn’t known for rusting. When test riding a bike, look for the ‘oil change’ light, which indicates the bike requires a service and can be adjusted. 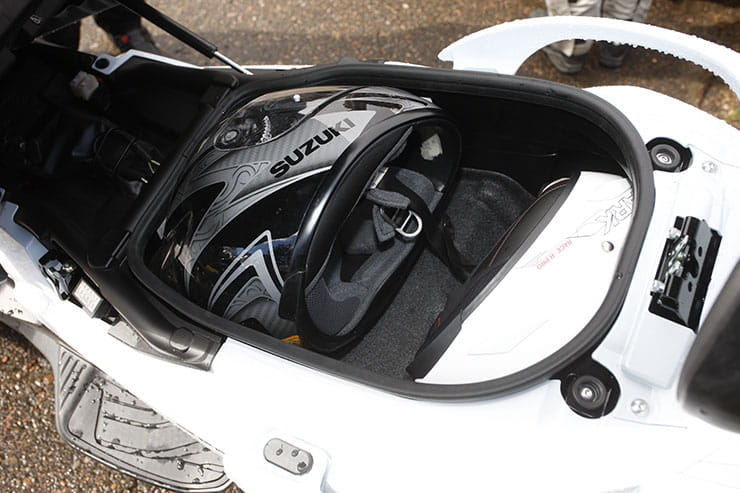 Suzuki claimed that in the 2013 update they managed to get 15% better economy out of the Burgman’s engine through a 35% reduction in transmission drag, however they refused to claim any economy figures. Owners generally reckon to average about 45-55mpg however there is an ‘eco’ display on the dash (new for 2013) if you want to ensure you squeeze as much mileage out of the tank as possible and 70mpg can be achieved... Realistically, expect about 140 miles before you need to start worrying.

This chassis was largely left unchanged when the Burgman was updated however the seat rail is 25mm slimmer than before and a few bits were trimmed off to save weight and the pillion foot boards moved 10mm upwards. The updated bike also feature slightly revised chassis geometry and a shorter wheelbase, not that this makes a huge difference to the ride. Not the sportiest of maxi-scooters, the Burgman is more a safe and stable cruiser and although you can hustle it through bends, it’s 277kg weight will always work against it. The slightly small-looking 15-inch front and 14-inch rear wheels are actually quite secure in their road holding and the suspension, although undeniably soft, is also ok for spirited riding. You wouldn’t really set out to destroy some bends on a Burgman but it can certainly deliver a fun ride and its low 760mm seat height helps off-set its weight at slow speed. When buying used, your main worry is crash damage and the suspension requiring a service or shock replacement, the rest of the bike is solid.

ABS is standard on the Burgman and while not exactly the most effective of stoppers, they are adequate for road use and as most scooter riders use both the front and rear together, they have enough power to stop the slightly weighty bike. In the 2013 update Suzuki swapped the discs from solid to floating rotors, which makes a small difference and helps reduce juddering, and also shifted the position of the parking brake’s lever. As on any scooter, always check the calipers’ pistons aren’t sticking as the chances are that the bike will have been ridden in poor weather conditions and that the ABS is functioning. Suzuki tweaked the design of the Burgman’s fork in 2013 to help protect the ABS sensor and stop it falling out when the front wheel is being removed, which is good, but they can still get hit by a disc lock if it isn’t removed! You laugh but this does happen... Always check the parking brake’s caliper, it is prone to seizing on if not used regularly. 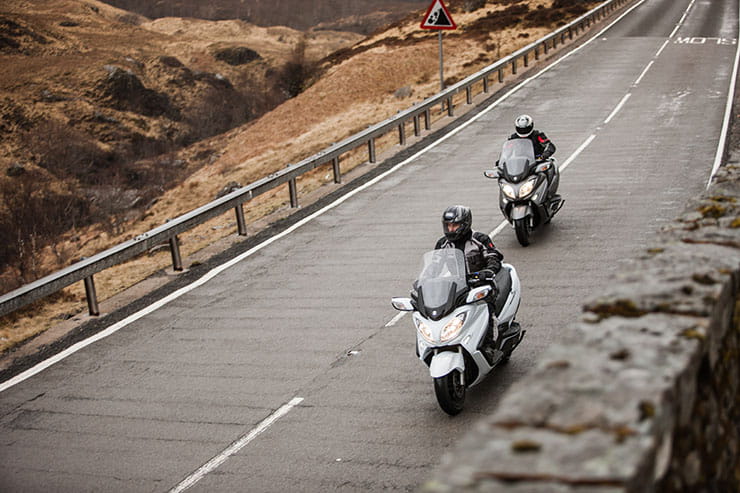 It may not sound like the ideal touring companion but you can most certainly cover miles on a Burgman and many riders do. The underseat storage is very generous at 50-litres (enough for two full-face lids) and you can add to this with a top box to boost its carrying capacity. The two cubby holes are 1.3-litres (left) and 5.2-litres (right) in size and as well as an electronically adjustable screen you get an adjustable backrest (50mm of movement) to keep you happy and heated seat and grips. To be fair it is a better solo than two-up tourer but if you want to travel, you can on a Burgman with its only real limitation fuel range as the 15-litre tank isn’t huge. Interestingly, there is a pre-wire harness for a SatNav under the instrument panel.

The Executive is the all-singing Burgman model and you get power modes as standard alongside ABS, however that’s not all! The Burgman’s mirrors retract electrically, five-level heated grips are standard alongside a heated seat and the screen is electronically adjustable. Always check all these functions work as getting them fixed can be a nightmare and also look in the storage compartments to see if all the internal lights etc work and the locks also. There is a DC connector in the righthand cubby hole, check it has power. In terms of accessories, a lot of owns fit a taller screen as the OE unit is a touch small and then you are down to practical features such as a top box, scooter apron and maybe bar muffs. Generally, most Burgmans are left standard and very few have things such as an aftermarket exhaust fitted, it’s just not that kind of bike and if it does you need to question why. Has it been down the road?

In the big scooter world the class leader is the Yamaha T-MAX, however it is also the priciest by a large margin and slightly limited in its storage capacity and comfort levels due to the fact it is a ‘sporty’ maxi-scooter. If you are after a maxi-scooter that is all about comfort, practicality and price, the Burgman 650 Executive is the best, and cheapest, option. It isn’t for everyone, however those that are into big scooters love the Burgman.

Three things we love about the Burgman 650… 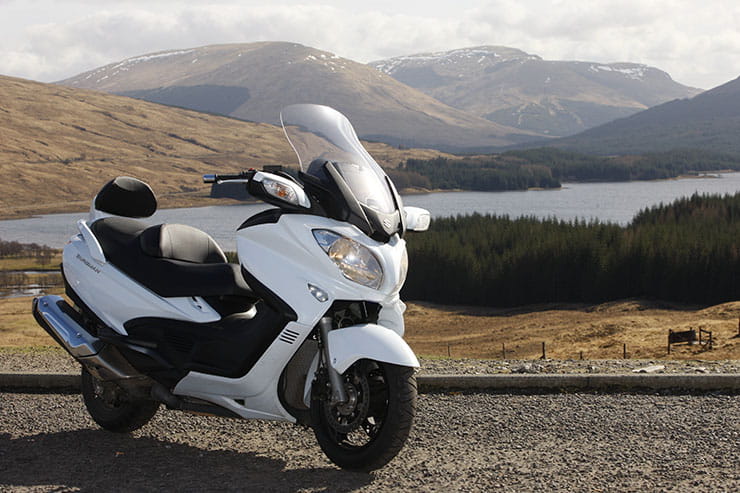