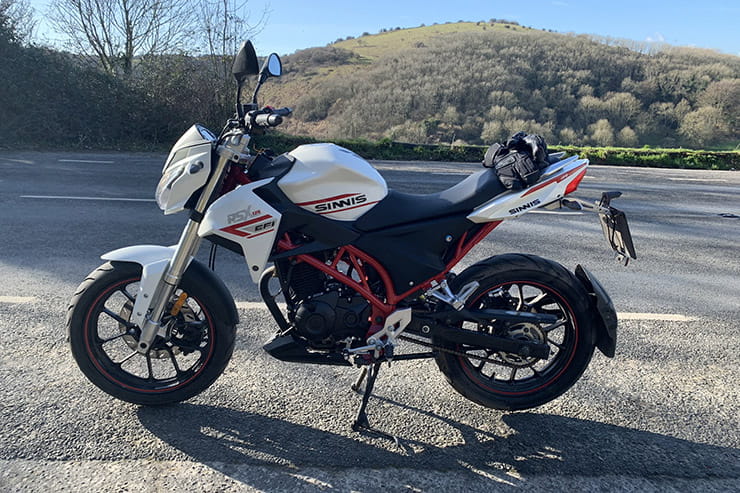 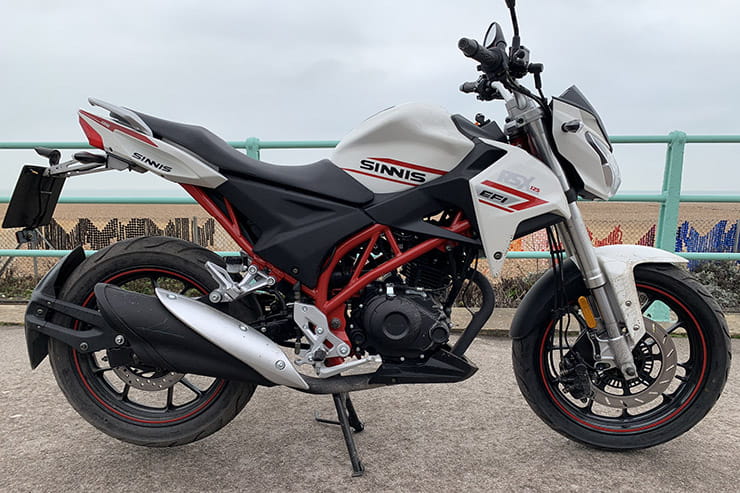 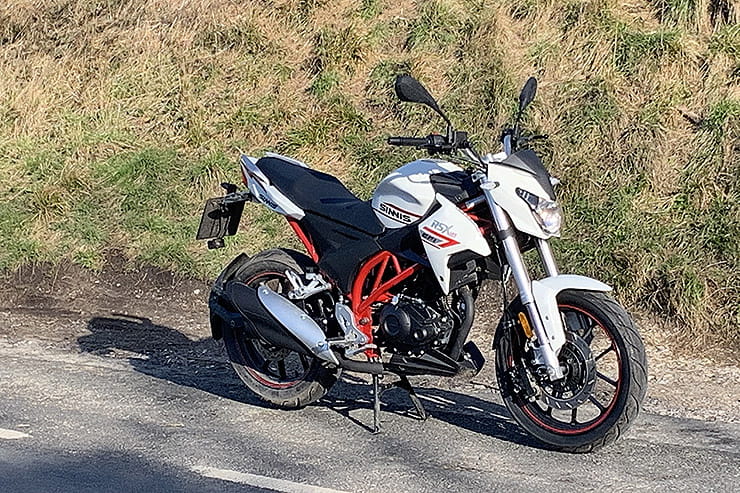 It’s your first motorbike so you want it to look great. And go great too. Oh, and it’d be good if it handled well and, er, cost somewhere around £2000. Say hello to the Sinnis RSX125 – a learner legal motorcycle that feels big enough to be credible, while also being easy-to-ride and manageable for those still getting to grips with biking.

List price is £2199, which is £1800 less than Honda’s CB125R and almost £2000 cheaper than Suzuki’s GSX-125. Your Honda and Suzuki dealer will argue that their bikes are a much more up-to-date design, especially the engine. And they’d be right. But for many people, while their first 125 might be the most exciting thing ever for a few months, it is also usually a bike that gets kept for the shortest time possible and then forgotten until they turn 40 when nostalgia bites and they spend a fortune buying another one.

Depreciation on Chinese bikes can be steep but Sinnis are built to a better standard than many and seem to hold more of their value for longer, if looked after. The biggest problem can be finding a dealer of the bigger brands who is willing to give a decent part-exchange price when you want to trade-up. Give yourself the best chance of doing this by looking after the bike properly, keep up with the basic maintenance and keep it clean too. 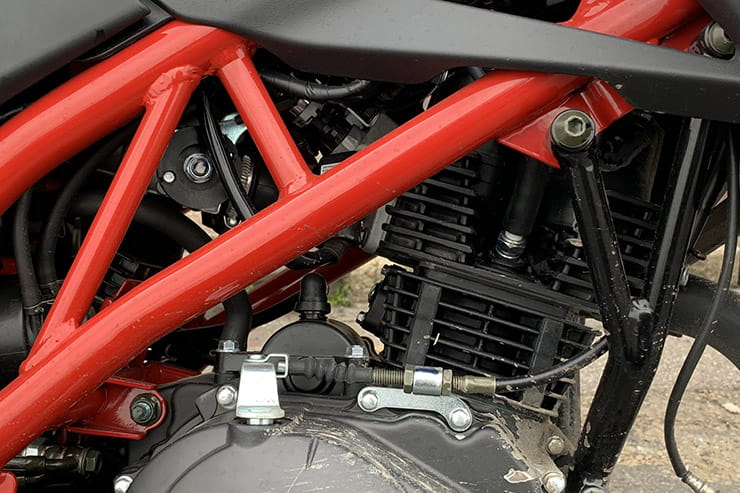 11.5bhp is enough for 60mph if you’re built like a teeny teenager. Middle-aged blokes in full winter kit are more of a challenge

The road up Ditchling Beacon in the South Downs was the steepest, twistiest climb on the bicycle race at the 2012 London Olympic Games. Less than a mile long it climbs steeply and turns sharply. On a push bike it’s a challenge and I was unsure how an 11bhp motorcycle carrying a 13-stone adult wearing another stone’s worth of winter bike kit, crash helmet and motorcross boots (don’t ask) would cope. The answer was ‘very well, thank you’. The RSX took Ditchling Beacon’s sharply-inclined hairpin bends in its stride, swapping between second and third gear without fuss.

11bhp is three bhp down on the latest water-cooled Japanese engines and there’s none of the midrange-boosting variable valve-timing technology you’ll find on the latest Yamaha R125. Sinnis don’t quote a torque figure, but the engine has enough user-friendly midrange power to keep up easily in urban traffic and, if you’re on the ball, you can get the jump on most sleepy car drivers when the lights go green.

The engine does struggle on faster dual carriageways. The five gears have widely spaced ratios and, with a heavy rider like me on board the RSX struggled to top 60mph. It would rev cleanly through the whole rev range in the first four gears, but bogged down a bit when I changed into top, struggling to go any faster and losing revs slowly.

Anything up to 50-55mph was fine and, away from motorways, most of the traffic seems to do those kind of speeds so it isn’t an issue. And for most riders, still on L-plates motorways are out of bounds anyway 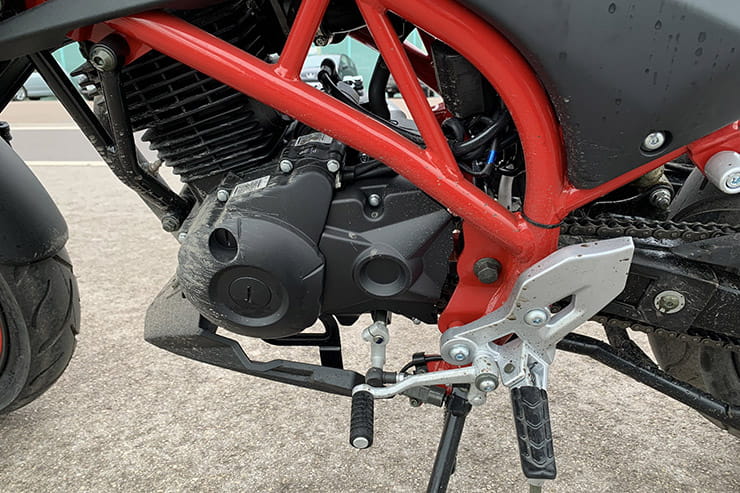 Only five gears, but the gearchange is positive and clutch is light

Air-cooled, single cylinder, two-valve engine, like many Chinese motors can trace its heritage to a previous generation Japanese unit. This one is based on the engine that powered Suzuki’s GS125 and DR125 models in the 1980s and 90s. That’s no bad thing and the power limit on learner riders means that the latest bikes are only legally allowed to make a few bhp more. So, just because it’s an older design doesn’t mean it’s that much slower than the latest units. What you have is a well-developed, usually reliable (if properly looked after) engine that has an easy spread of power throughout the rev range.

Adding fuel-injection to an old, air-cooled motor might seem a bit like putting a USB port on a horse, but the result is smoother power delivery, easier starting, slightly more mpg and cleaner emissions so it meets Euro 4.

It’s a really easy engine to use – perfectly suited to new riders. The power builds gently with no surprises and you can be in second (or even third) coming to a halt without it spluttering or threatening to stall. There’s no redline on the dashboard and the rev counter stops at 11,000rpm. Our test bike was very new (just 23 miles on the clock when we picked it up) so I set myself an 7000rpm limit for the first few miles and let the engine bed-in a bit and warm up properly before thrashing it.

The clutch action is light and the gearchange is positive, but not clunky. On several occasions I thought I’d selected neutral at a standstill only to find that despite the neutral light being lit, the bike was still in gear, and it stalled when I let the clutch out. Other than that, the gear change is good. A sixth gear would add to the bike’s flexibility, making it easier to eek out another vital few mph on a national-speed-limit dual carriageway. 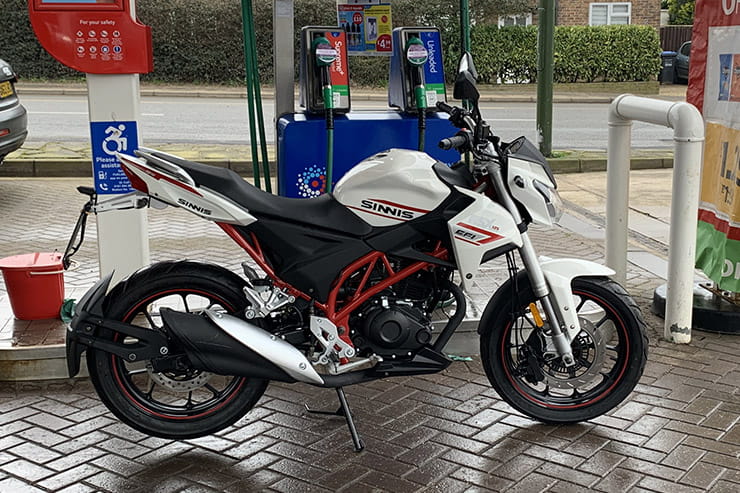 An average figure of just under 90mpg sounds pretty good, but there are plenty of bigger bikes and a lot of other, more modern 125cc engines that do much better.

However, as mentioned above, our test bike was very new and I’d expect the mpg figure to rise as the engine beds in and loosens-up a little. Our test ride was a mixture of urban riding at walking pace-to-30mph, a fair bit of 30-50mph stuff and ten miles on 70mph-limit dual carriageway. On a fully run-in motor I’d expect to see 100mpg average.

The trellis chassis, looks great and could probably handle much more than the RSX’s 11bhp. Beefy upside-down forks and a well-set-up single shock absorber are a welcome alternative to the spindly and soggy suspension that hamper many Chinese bikes.

The ride quality on bumpy roads is excellent and cornering on what were cold, greasy, January roads was confident and consistent – just what you need when you’re still learning. The seat is low enough to not be intimidating and the RSX’s 135kg is easy to manage when pushing it around. Chinese chassis’ have come a long way in the last few years. 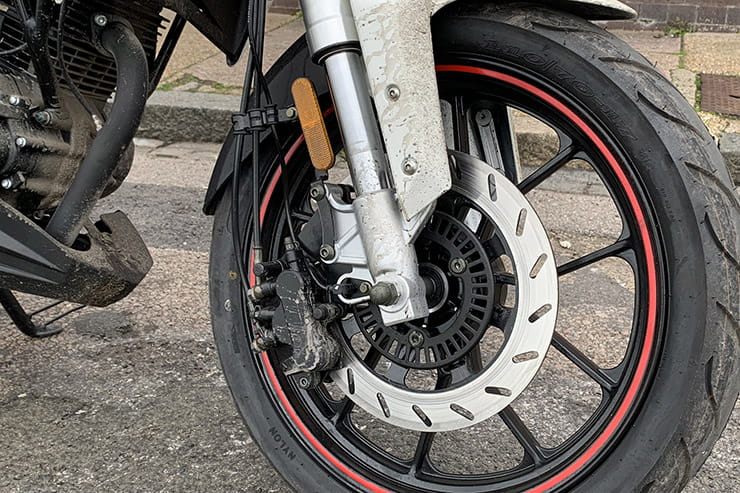 Suspension is beefy for a 125

Single discs front and rear are linked (like some Hondas) so pulling the lever brings in most of the front brake and a little of the rear and pressing the pedal gives most of the rear and a little of the front. The rear brake feels like it has more power than the front, but even clumsily stamping on it trying to test an ABS system that turned out not to be present (despite the front wheel appearing to have an ABS timing ring and sensor) it slowed sharply but still didn’t lock-up.

The front brake has power when you give it a good tug, but some subtlety too meaning new riders will be less likely to over-do it and crash

Naked bikes aren’t usually that comfortable over distance because the high-speed windblast is tiring. But a 125 isn’t really quick enough for that to be a problem. The RSX125’s seat is comfortable for an hour and a half in the saddle and the riding position is spacious enough that arms and legs don’t get cramped. With a fuel tank range somewhere in the region of 250 miles you could go a long way without stopping on one of these. 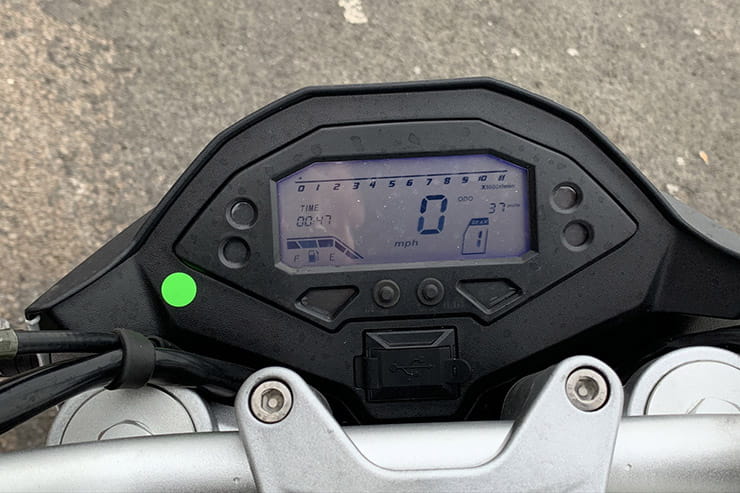 All the info you need and a USB port too

Instrumentation is reasonably comprehensive including a clock, night time setting on the instrument lighting, gear position indicator and USB port.

There’s a cut-out switch that prevents you starting the bike with the sidestand down too.

And, it has a centrestand too, which might not win you street-cred points when the talk turns to ‘how fast does it go mister?’, but it makes routing maintenance like adjusting and lubing the drive-chain easier, which means it is more likely to get done. 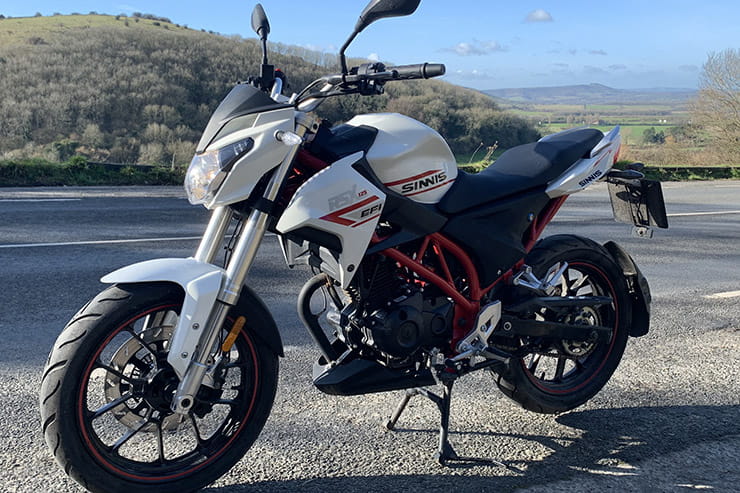 The chassis feels like it could handle twice the power

This is a good bike to learn to ride on regardless of the price. The power delivery is friendly and easy to use, riding controls are light and consistent and it steers and handles well. Fuel-injecting the engine removes some of the running and reliability problems that older Chinese bikes suffered from and the build quality looks a lot better than Chinese bikes were a few years back. To test out the latter point I cruelly left the Sinnis uncleaned in my garage for four days after riding it on salt-caked rural roads. It was filthy when I put it away, but cleaned up really well when my conscience finally gave in and forced me to gets the sponges and power-wash out. Sorry Sinnis, but the result was worth it.

And it reinforces what a good bike this is for the money.

The biggest question with Chinese bikes is still reliability. BikeSocial would argue that these days (and especially on the evidence of this RSX125) the bikes themselves are more than good enough if you learn to look after it. Keep the brakes and chain in good condition and change the oil regularly, there’s no reason why a bike like this shouldn’t be reliable. All new Sinnis bikes also come with full AA cover for the first year including Home Start and Relay recovery, so if something does go wrong you won’t be left stranded.

Many of the reported problems with Chinese bikes are as likely to be down to poor preparation at dealers who haven’t been factory-trained as the bikes themselves. Little things like checking the electrical connections properly and running a spanner over the nuts and bolts should be a given, but not every dealer does it as well as they should. Our test bike had been prepped by On The Wheel in Brighton and was absolutely spot-on in every respect.

So we’d say don’t be worried about buying a Chinese bike, but choose your dealer carefully. 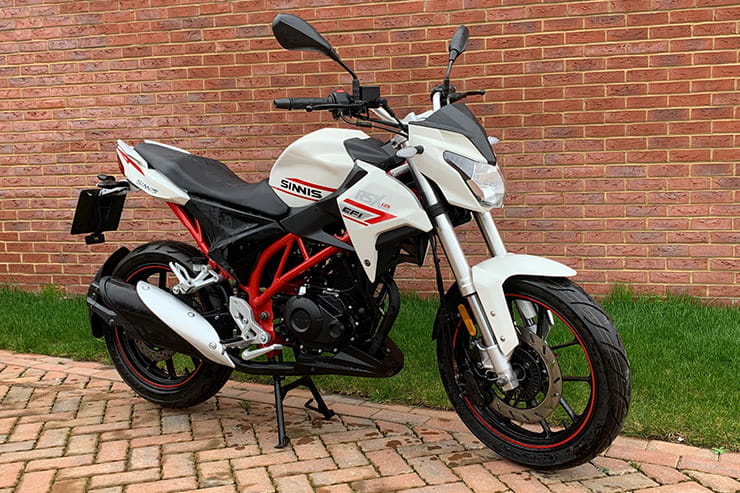