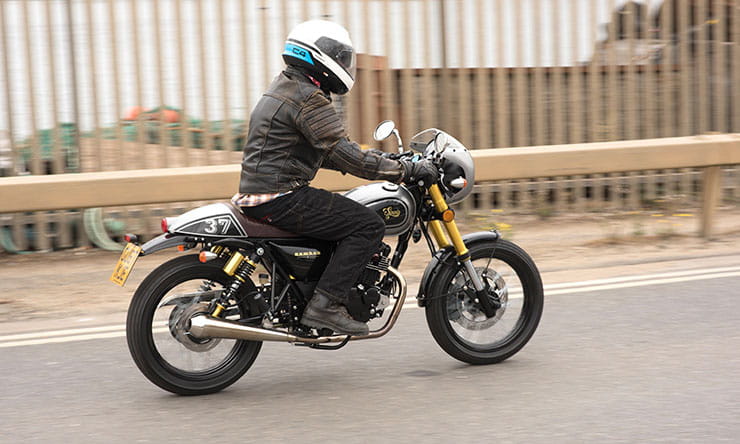 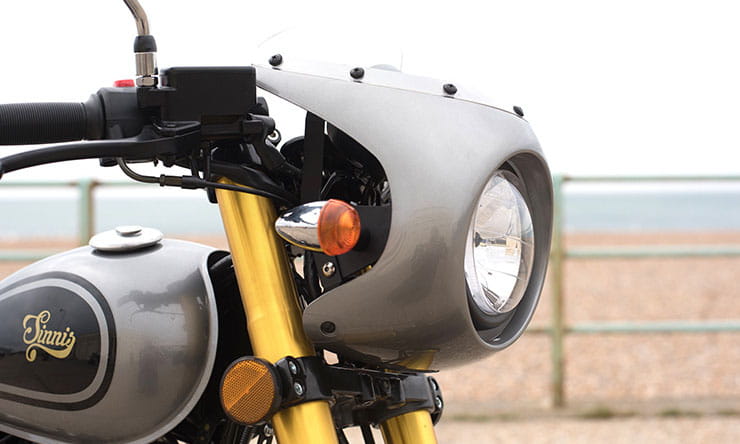 When it comes to retro 125s, Brighton-based Sinnis has form. It was one of the first to tap into this market, importing Chinese 125 roadsters with a distinctively retro look. The Bomber is just the latest of these, and it certainly looks the part, backed up by lively performance from its little overhead cam motor. It's got some rough edges, notably in the level of vibes at speed, and there's plenty of competition now – the Mash Black Cafe Racer, AJS Cadwell and Herald Cafe are all very similar packages. 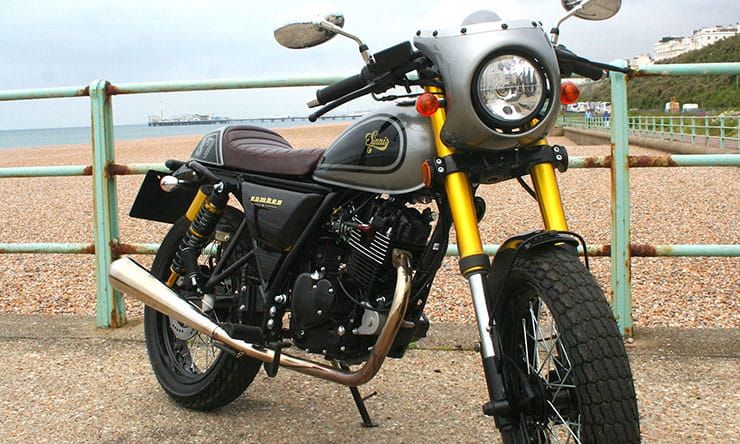 There may be plenty of competition, but they're not far apart in price. At £2395, the Sinnis is just four quid cheaper than both Mash and AJS, while Herald asks £2450 for the Cafe. The AJS has the added appeal of a classic badge while the Herald has a slightly different take on the whole concept. Let's be honest, for £500 less you could buy a standard 125cc roadster with similar performance to any of these, but that wouldn't have the Ace Cafe aura.

With 11.6bhp, the Bomber has decent power for a 125. On first riding, it feels incredibly low geared, with first able to climb the side of the proverbial house and fifth (top) happy at 20mph and feeling quite busy at thirty, as if there's not a lot more to go. But that's deceptive, because the engine is eager for revs – use the gears, and it endows this 124kg bike with spirited performance, whipping up to an indicated 60mph reasonably quickly and winding up to seventy on the flat. It'll happily cruise at 55-60mph and keep up speed on hills without having to change down. Top marks for performance then. 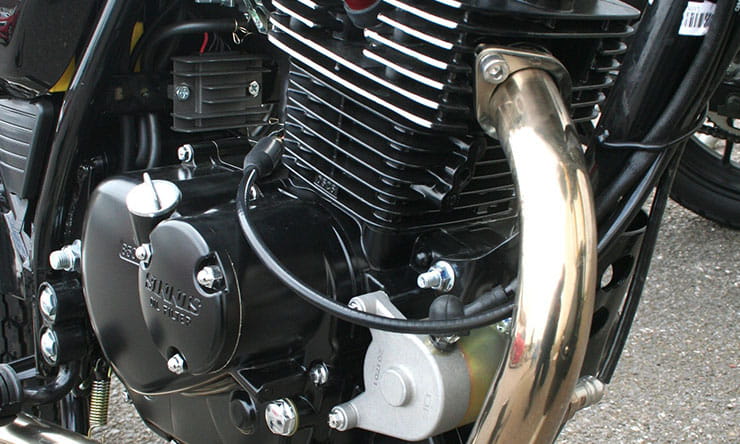 Chinese 125cc engines come into two categories – the 7-8bhp fan-cooled motors fitted to budget scooters and the 10-12bhp units used by geared bikes. The Bomber's power puts it near the top of the latter category, though there's nothing particularly special about the engine. It's a simple two-valve SOHC design, based on the old Suzuki GS and now with fuel injection to cut emissions in line with the Euro 4 standards. The gearbox has five speeds rather than six and overall gearing is low, but as mentioned that's partly what gives the bike its zippy feel.

Geared 125s are among the most economical vehicles on the road, and that includes clever-clever hybrid cars. I didn't have time to check the Bomber's fuel consumption, but given a little restraint it should manage 100mpg. The tank holds a generous 10 litres, so we're talking at least 150 miles of range. Not exactly an issue on a caff racer 125, but nice to know. 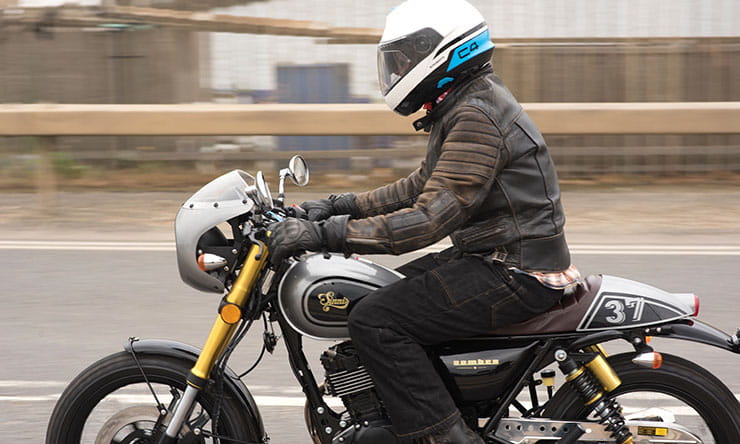 Apart from the USD forks, this is an old school chassis, with twin shocks and a tubular steel frame, and none the worse for that. The forks are very stiff, but otherwise the Bomber inspires confidence in the twisty bits, whether round town or out on the open road. At 124kg, it's easy to throw around and responds well to steering inputs while the Timsun rubber, complete with blocky tread, hangs on to the tarmac, at least in the dry. It's only at higher speeds that the Bomber feels less happy. Once over 60mph the front end goes a bit light and the whole bike feels as if it's floating over the tarmac rather than planted to it.

Linked brakes are part of the spec of all new 125s now – they don't have to have ABS, but both brakes must be operable via one lever or pedal. On geared bikes it's the pedal, which needs quite a shove to get a hard stop, and I found myself using the right-hand lever as well (which operates the front brake only) for a braking boost. That apart, they're well up the performance of the bike.

Good news and bad news here. By cafe racer standards the Bomber's riding position is pretty mild, even though it looks the part, which is kinder to middle-aged backs. (And let's face it, plenty of older riders buy bikes like this now). By contrast, the seat is authentically hard, straight out of the shed-built, old-skool etc tradition. The tailpiece is removeable to accommodate pillions. Something else that breathes authenticity is the level of vibration from mid-revs upwards, tingling through the seat and pegs and setting the mirrors a-buzz. Exciting in short bursts, tiring in the long run. 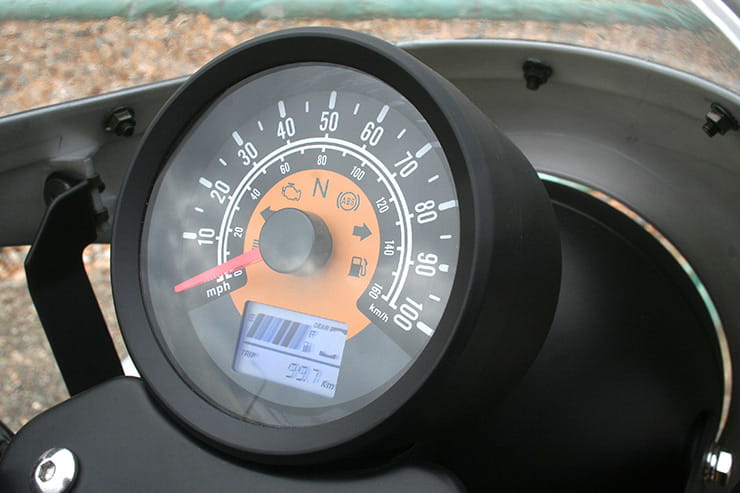 Not much to say here because the Bomber is built down to a price and doesn't have much in the way of equipment, though the USD forks and remote reservoir rear shocks do look quite flash, and the shocks are pre-load adjustable. I'd like to have seen a rev counter on a bike with racer aspirations and such a revvy motor, but the Bomber does boast a quickly detachable headlight cowl, which none of  its rivals do, so you can alter the styling in a couple of minutes. 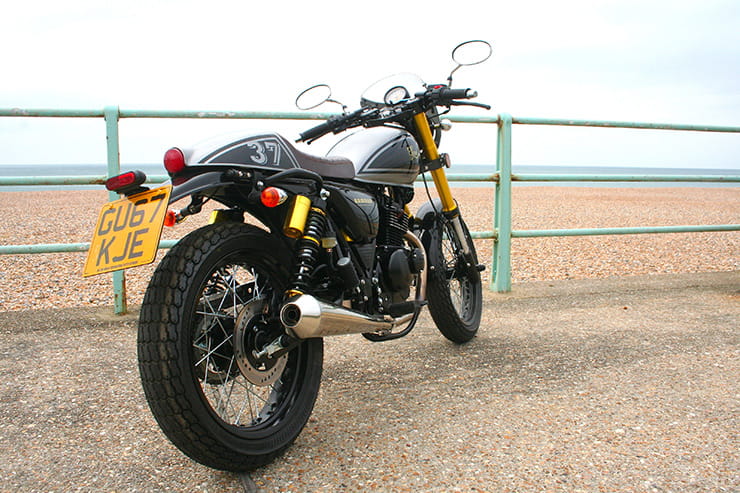 The Bomber is a flashy little bugger. Everything about it screams 'look at me,' and I have to say the basic styling is spot on, with a slim and purposeful look from the headlight cowl through the tank and humped seat to the tailpiece with the circular rear light. The colour scheme works well too, all silver and black set off by black spoked rims and the gold finish forks and shock reservoirs. In short, it looks the part. 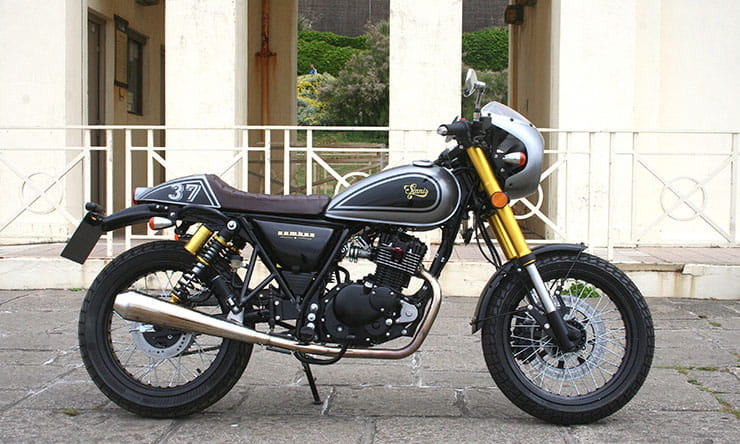 I liked the Bomber. Sure, it vibrates at high revs and feels a bit vague at dual-carriageway speeds, but apart from that it goes, handles and brakes pretty well. And on Brighton seafront it looks poised to race to the next milk-bar.

Three things I loved about the Sinnis Bomber… 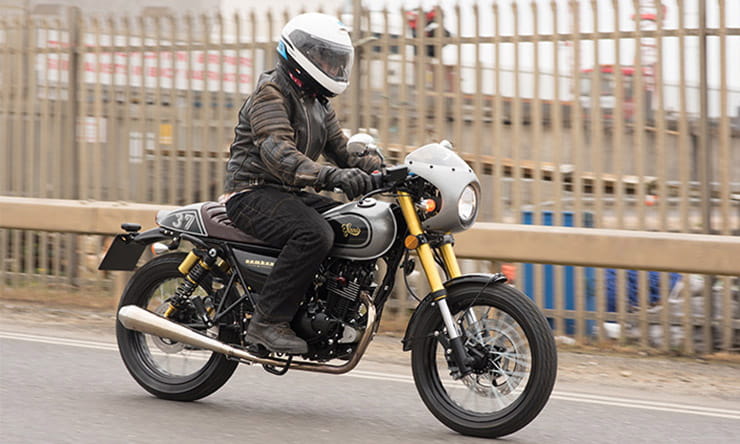