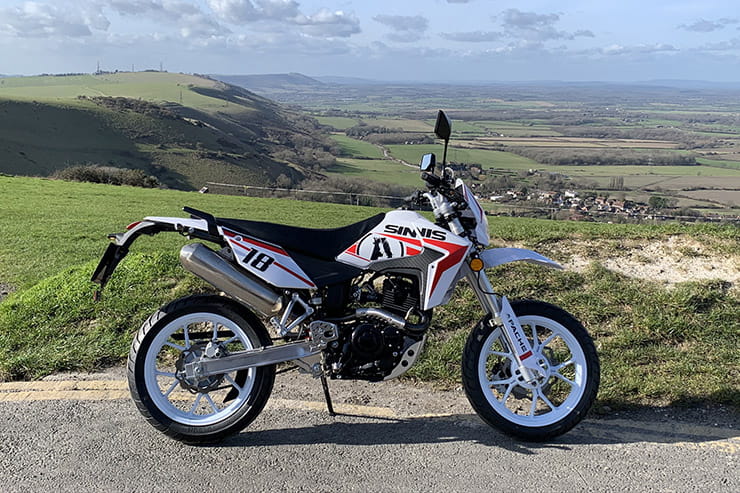 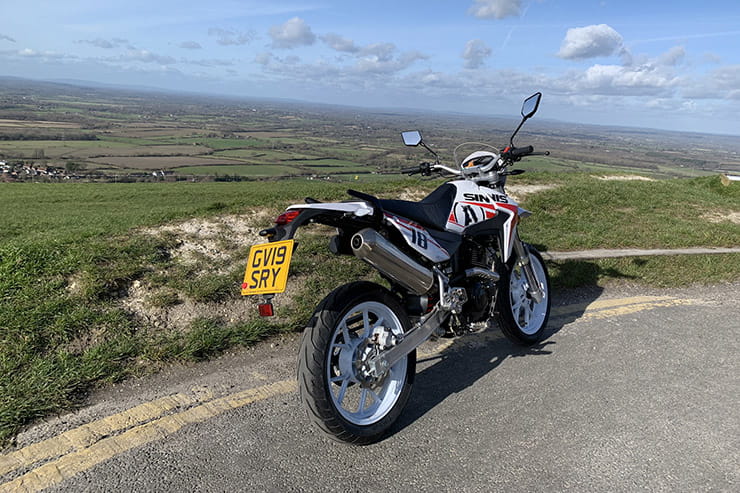 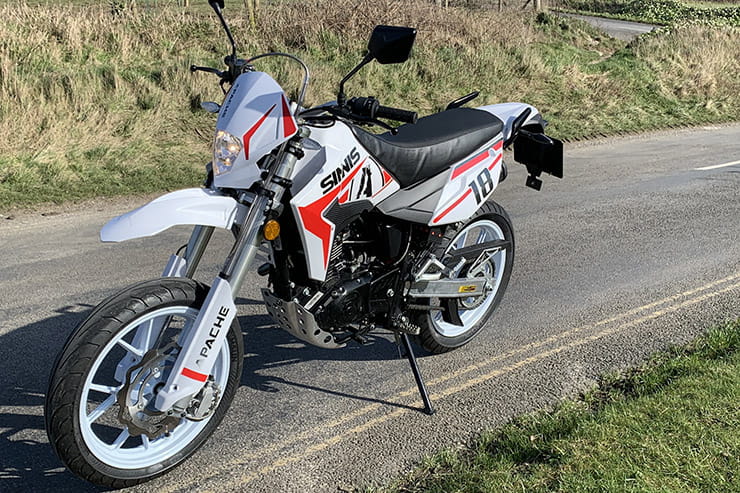 For most people their first bike is a functional as well as cool-and-funky thing. In amongst (warning, incoming motorcycle clichés) charging around being the coolest kid in town, making a racket and annoying the hell out of everyone, many first bikes are also the rider’s only serious transport too. So, as well as doing a million mph (claimed) they should be comfy, economical and reliable. Cheap to run, easy to service and still worth decent money when it’s time to move up. Sinnis are one of the more progressive Chinese manufacturers and have a range of 125cc machines that cover everything from retro-cool to look-at-me supermotos like this one. If you haven’t looked at the better Chinese brands recently, you’ll be pleasantly surprised by a serious uplift in quality of both components and construction

List price is £2399, which is very good value for a well put-together motorcycle using what appear to be high-quality components Japanese manufacturers might claim that their bikes use more up-to-date engines, but their bikes cost almost twice as much in some cases. And for many people, their first 125 is also usually a bike that gets kept for the shortest time possible.

Depreciation on Chinese bikes can be steep but Sinnis are built better than many and should hold more of their value for longer, if looked after. The biggest problem can be finding a dealer willing to give a decent part-exchange price when you want to trade-up. Give yourself the best chance of doing this by looking after the bike properly, keep up with the basic maintenance and keep it clean too. 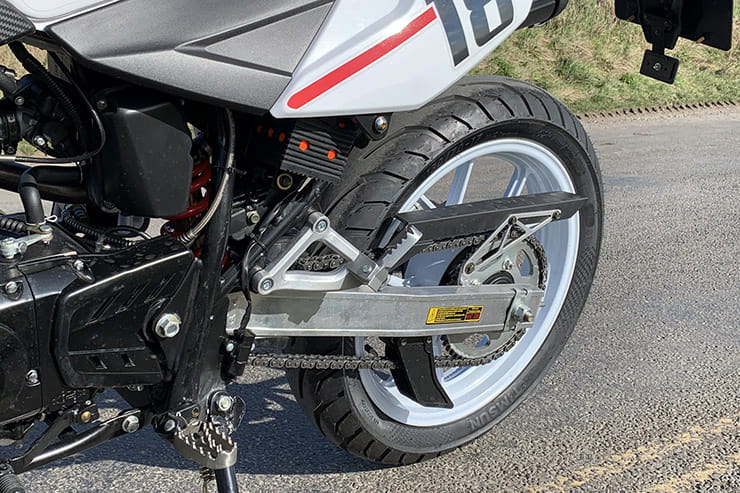 It’s a seriously good-looking bike with some lovely attention to detail. The chunky, grippy footpegs are a nice touch as is the huge alloy swing-arm that’s bigger than you’d have found on a 100bhp, 750cc superbike in the 1980s. Likewise the sturdy upside-down front forks. You might argue that they are mostly for show on an 11bhp 125cc bike, but there’s nothing wrong with that. This is a seriously cool bike and, if the regulators are going to restrict your speed then you might as well make up for it with cool styling when you park up.

11bhp is three bhp down on the latest water-cooled Japanese engines and there’s none of the midrange-boosting variable valve-timing technology you’ll find on the latest Yamaha R125. Sinnis use the same air-cooled engine in all their 125cc range. What it lacks in top-end power it makes up for in an easy delivery of usable midrange that makes it quick enough to keep up in urban traffic and get the jump on sleepy car drivers when the lights go green.

The engine struggles on national-speed-limit dual carriageways though, struggling to top 60mph. It revs cleanly through to the red line (about 50mph) in the first four gears, but struggles to carry on accelerating beyond 55-60mph once in top, only needing a slight gradient to see the numbers start dropping away.

Anything up to 50-55mph was fine and, away from motorways, most of the traffic seems to do those kinds of speeds so it isn’t an issue. And for most riders, still on L-plates, motorways are out of bounds anyway 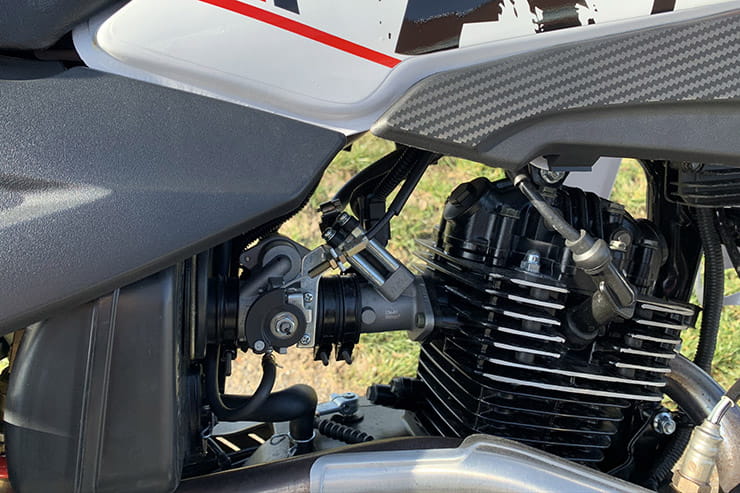 The Apache’s air-cooled, single cylinder, two-valve four-stroke engine is essentially a copy of Suzuki’s GS125 motor from the 1980s. The power restrictions on learner riders means that even the very latest bikes are only legally allowed to make a few bhp more so on the road it isn’t that much slower than the latest units until you get to 55mph (the latest 14bhp Japanese units will go 10-15mph faster).

The Sinnis motor is easy to get the most out of, usually reliable (if properly looked after) and has a good spread of power throughout the rev range.

It’s perfectly suited to new riders. The power builds gently with no surprises and even though you spend a lot of time close to the redline, it usually feels like you have something left in reserve. The redline is at 10,000rpm and 50mph in fourth (out of five) gears is around 8000rpm.

The clutch action is light and the gearchange is positive, but not clunky. Finding neutral can be tricky though. The clutch take-up when moving off from rest is very smooth, making for easy getaways.

An average figure of just under 100mpg is pretty good, which should give somewhere in excess of 200 miles to each 10.6 litre tankful.  The engine in our bike was still fairly new, with just 120 miles on the clock and I’d expect that figure to rise a little when the bike was fully run in. 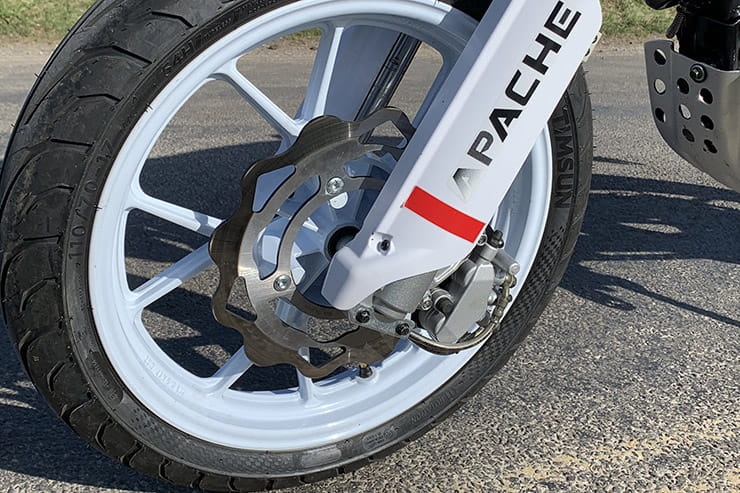 Softly-sprung, long-travel suspension needs cornering practice to get the best from it, but the rewards are worth it

The simple chassis is easily strong enough to handle the Apache’s power and the fat upside-down forks and softly-set-up single shock absorber give a good mix of handling confidence, ride quality over bumps and that slightly loose, ‘I used to be a dirt bike’ feel that most great supermotos have. Turning a trail bike into a Supermoto usually involves swapping large diameter off-road wheels for smaller, wider road-based rims. The upside is more tyre contact patch from fatter rubber, but the downside is the smaller wheels can make the steering twitchy.

The Apache demonstrates both traits. There’s more suspension travel than on Sinnis’ RSX125 for example, giving a supple ride on bumpy roads. It also means you need to get your braking for a corner done early to stop the forks bouncing up as you release the brake right at the moment you are wanting to turn. Plus, the soft set-up can also feel a little vague in a faster corner (or even more so if you take a slow corner slightly too fast). Thankfully, if you are bold enough to lean the bike a little more and keep the throttle open, the Apache will get around most things.

The seat is high at 870mm, but narrow, and the soft suspension compresses when you get on it making the real riding height low enough to not be intimidating. 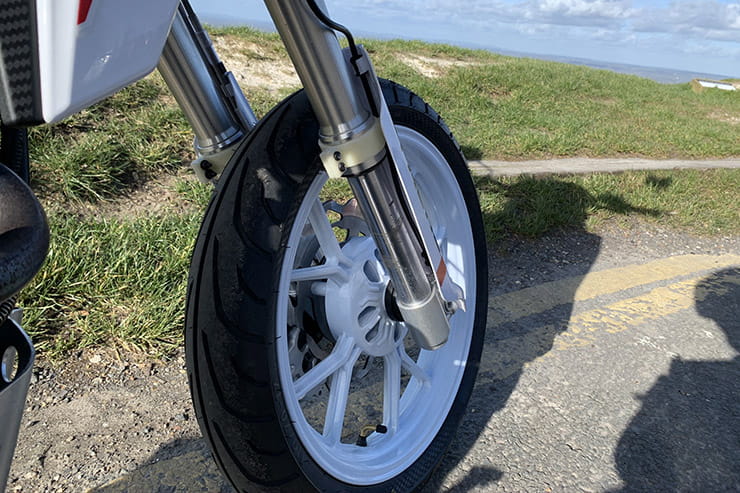 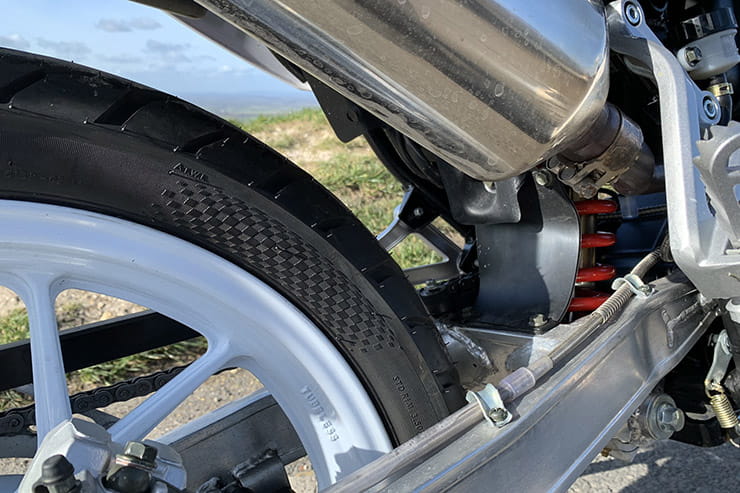 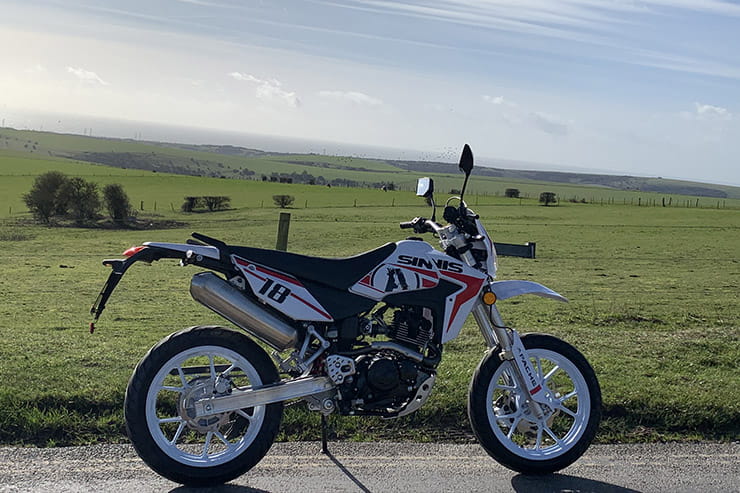 No ABS but front and rear brakes are linked

Single discs front and rear and both work well. The system is linked so pulling the lever applies mostly front brake with a little rear and pressing the pedal does the opposite. The rear brake feels like it has more power than the front, because applying the front brake brings a lot of dive from the front forks before it feels like the bike is slowing. Once you get used to it and trust the tyre grip, suspension and brake performance, you simply pull a bit harder. The upside to this is that new riders will be less likely to over-do it (as often happens on bikes with very sharp brakes) and crash

Supermotos aren’t known for their long-distance comfort because the riding position turns the rider into a sail while the narrow seat is designed for agility rather than comfort. Most 125s aren’t really quick enough for the windblast to be a problem and the likely teenage customers of an Apache will be hard-as-nails under-25s who can sleep upside down in a bell-tower on Sunday morning and not be disturbed. So for most, it won’t be a problem. The Apache’s seat is comfortable for an hour and the riding position is spacious enough that arms and legs don’t get cramped. With a fuel tank range somewhere in the region of 200 miles you’ll be stopping for coffee long before you run out of fuel. 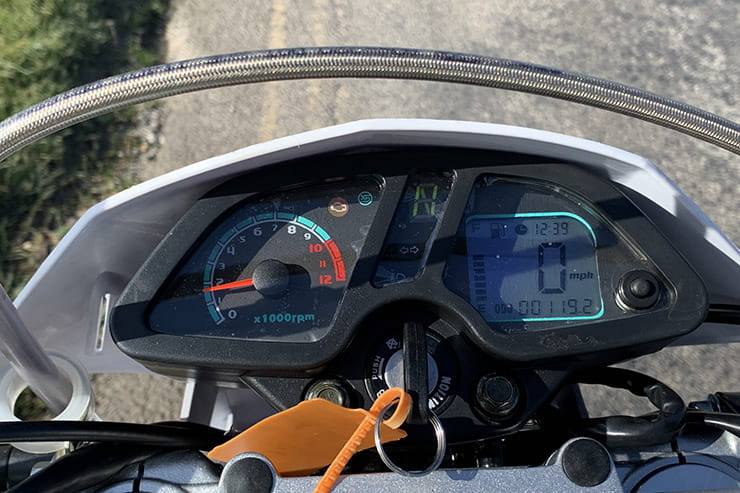 Instrumentation is old school and reasonably comprehensive including a clock and gear position indicator, but no USB port like the cheaper Sinnis RSX125.

In keeping with the Supermoto image there’s no centrestand  which will make routine maintenance like checking tyres and adjusting or lubing the chain a bit more tricky.

If you’re in the market for an off-road style 125cc bike or a Supermoto, then you’ll be looking at a bike from China. None of the major Japanese manufacturers currently have either a 125cc off-roader or Supermoto in the range. KTM’s Duke 125 is close and has distant Supermoto heritage, but costs £4249. The Sinnis Apache might be a learner-legal bike but it has the dimensions of a full-size machine, which makes it comfortable for full-size human beings.

Like most supermotos, the riding position, attitude and sharp steering give it a sense of fun and it’s hard not to let your mischievous side rule your riding and take a few liberties with traffic, speed bumps and mini roundabouts.

The punchy (for a 125) engine suits this kind of urban foolery and the suspension and brakes are up for the experience too. For the price of a five-year-old Japanese learner bike you can have a brand new Sinnis. Think about that for a moment.

As for the reliability question. We’d argue that these days the bikes themselves (like this one) are good enough if you look after them properly. With regular maintenance and corrosion protection (just like all bikes require), there’s no reason why the Apache shouldn’t be reliable. All new Sinnis bikes come with full AA cover for the first year including Home Start and Relay recovery, so if something does go wrong you won’t be left stranded.

Many of the reported problems with Chinese bikes are down to poor preparation at dealers who haven’t been factory-trained. Our test bike had been prepped by On The Wheel in Brighton and was perfect in every respect. 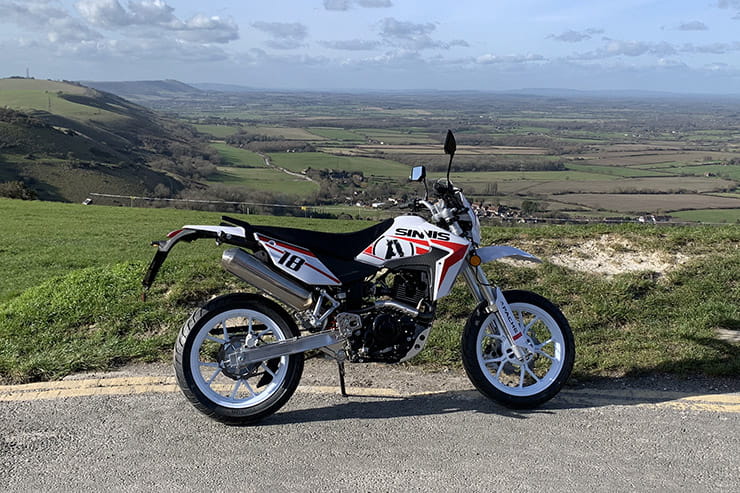