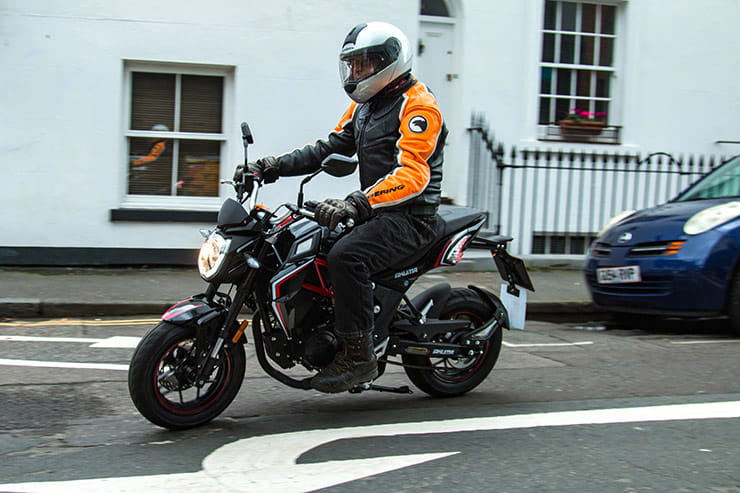 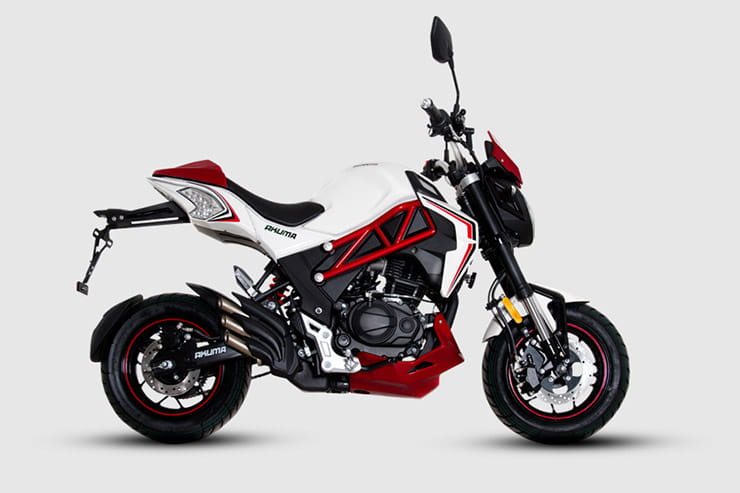 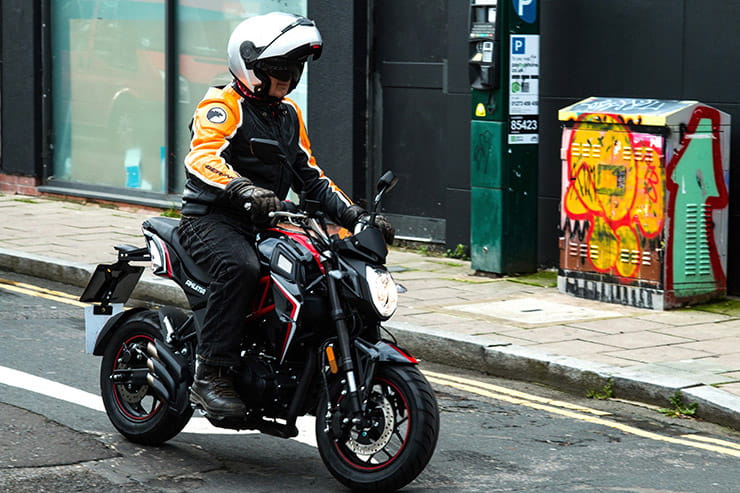 Some bikes take themselves very seriously. You know which ones I'm talking about fully loaded spec, serious intent, lots of presence and if they had a face (which they do, of a sort) it would wear a permanent, manly frown.

The Sinnis Akuma isn't like that. This is a cheeky chappy of a bike, carrying on the tradition of the original Honda Monkey, but taking garishness to new levels. If an Akuma was on stage, it would wear a gold lame jacket, platform shoes and outsize specs. On the road, it just shouts 'look at me.' First and most obvious, note the three tailpipes, giving the impression that this is a miniature triple, which it isn't. Tucked away underneath is a small unsexy silencer to service the bog standard 125cc single. Full marks for cheek though.

Then there's the bright red trellis for a touch of Ducati, bits of pretend carbon fibre here and there, plastic bar ends, fake grilles all over the place... Sports stripes, red highlighting and huge LED-heavy rear lights and indicators. It all makes Honda's MSX look positively sensible, but underneath all the glam is a thoroughly conventional minibike of tiny dimensions which should be good around town.

The Akuma only has two real small-wheel rivals – Honda's long-running and successful MSX and the recently reborn retro Monkey, which cost £3389 and £3699 respectively. With prices starting from £1999 the Akuma is a lot cheaper than both, partly accounted for by the older spec engine and a less high street badge. But it's not the cheapest in class – that honour belongs to the Lexmoto Riot, which costs £200 and looks as if it rolled off the same production line.

This is a relatively cheap, low tech 125, so we wouldn't expect power and torque near the A1 class limit of 14.3bhp, though at 11.3bhp it's quite respectable, along with 8.3lb ft. These figures may not sound like very much, but the little Akuma weighs only 120kg, making it 15 kilos lighter than the Sinnis Hoodlum, which uses the same motor.

Fire it up and the motor sounds like countless other four-stroke 125s, despite the exhaust, but the good news is that reasonable power and low weight add up to quite nippy performance. There's quite eager acceleration in all gears except top and it will climb up to 8-9000rpm on the digital rev counter before an ignition cut-out does its stuff at 10,000. None of this happens very quickly, but make use of the gears and the Akuma goes quite well. It's smooth too until 8000rpm, and the mirrors will start to blur at 55-60mph. It'll hold an indicate 60mph on the flat and creep up to 65 downhill, so it's just about fast enough for a busy dual-carriageway. It's been said before about little bikes on big fast roads, but if you can keep up with the HGVs, you should be OK.

At this price, you don't get liquid-cooling, double overhead cams and variable valve timing. The Akuma's power unit – shared with other Sinnis 125s such as the RSX and Hoodlum – is a basic air-cooled overhead cam single. It's like thousands – no, make that millions – of Chinese 125cc motors which owe much to older Hondas, Yamahas and Suzukis. Not that there's anything wrong with that, as engine designs don't come much more well proven than this, though you wouldn't call it sophisticated. It does have fuel injection, but only as a means of complying with Euro 4 emissions limits. The engine is backed up by a conventional five-speed gearbox (we're not in six-speed territory here) and that three-pipe exhaust, which manages to make a styling feature out of something quite ridiculous. 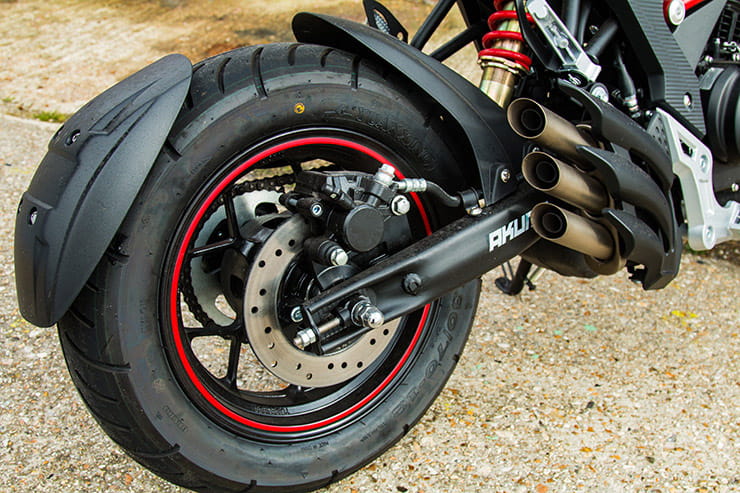 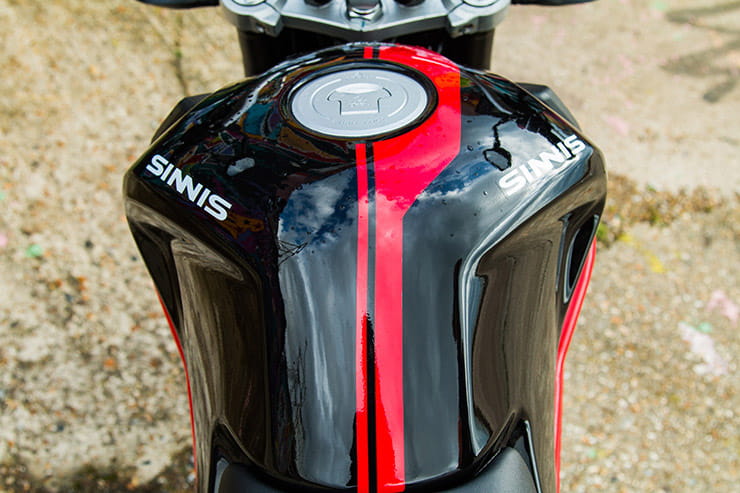 I averaged 75.5mpg over a mix of inner-city Brighton (is Brighton a city?), fast dual-carriageway and some twisty B-road. That's not as good as some 125s, but Akuma probably isn't aimed at commuters counting the pennies. Fill the sizeable 13.5-litre tank, and you should have a useable range of nearly 200 miles.

The Akuma is a tiny thing, thanks to its 12-inch wheels and short stubby wheelbase, which with the low weight makes it very easy to fling around town. If two Transits are causing a long-term road blockage, just hop off and wheel it along the pavement – it's so small that no one seems to mind. Wide bars (the only thing on the bike which isn't small) and that small front wheel make the steering very responsive, and the Yakuma tyres grip well. As you'd expect at the price, the suspension isn't top notch, with just pre-load adjustment on the rear monoshock, but it all does the job. One plus point is that despite the short wheelbase and small wheels, the Akuma doesn't feel twitchy or unstable at speed.

All new 125s have linked brakes now, and those on the Akuma work really well – pressing the pedal brings both front and rear discs into play with no sign of premature locking in the wet. For extra power, the bar lever can be squeezed too. No ABS, but you wouldn't expect that at the price. 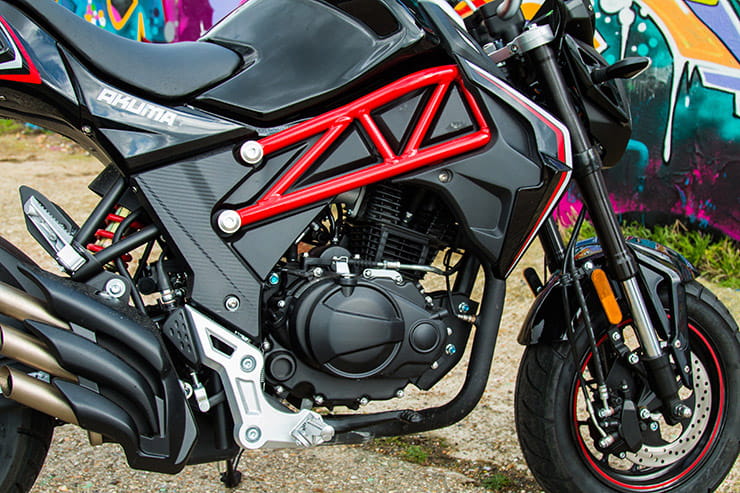 Let's make one thing quite clear – no one is going to take an Akuma touring (though there's always a first time). But however small and fun the bike, it's good to know that it can tackle a long day ride if that's what you feel like doing. The arms-wide riding position takes a bit of getting used to but the seat's OK and is low enough to get one foot (if not two) flat on the ground. But there are two provisos. I'm 5'6”, and even I looked big on the bike, so it probably won't fit six-footers. And although there is space on the seat for pillion, there isn't much of it, so passengers should be small or up for short rides only, preferably both.

The Akuma's rider aid is its digital dash, showing speed, revs, fuel and miles plus even ambient temperature, though it reckoned a blustery autumn day in Brighton was at 22 degrees C... The dash also has a 'colour' button which sounds entertaining...but doesn't change the colour. Security is limited to a steering lock and this isn't the sort of 125 you would fit a top-box to, but you do get a two-year warranty. A belly pan, seat cowl and headlamp cowl are accessories. 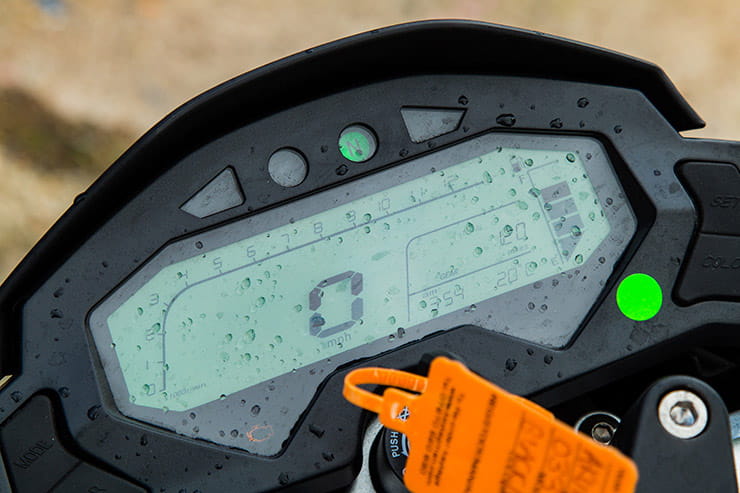 Sit on the Akuma at the lights and you'll feel dwarfed by everything else. But not intimidated, because the bike is too upbeat and cheerful to allow such a thing. It's not as practical as most 125s but is a hell of a lot of fun. I just need gold lame jacket to go with it.