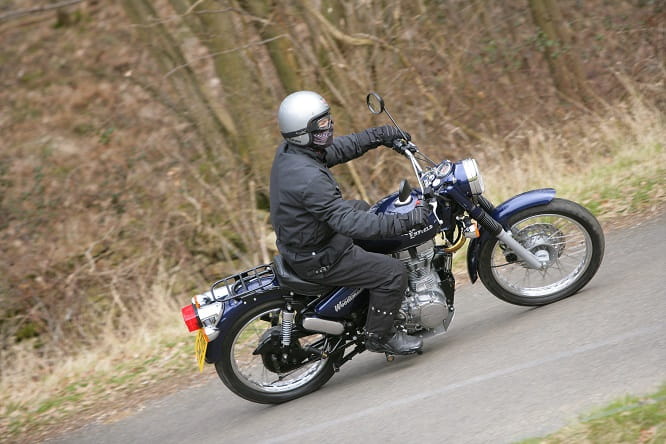 Watsonian Squire – Royal Enfield’s previous UK importers – had a bit of a knack for making 'specials'. They'd take the basic Bullet change a few key elements and make a cafe racer, a trials bike, or a tourer. It's a bit like riders did back in the 50s and 60s before things like off-roaders and street racers were available off-the-peg.

One of their most overlooked variants was the Woodsman street scrambler.

Essentially the Woodsman is just a standard EFI Bullet with a high-level pipe, some off-road bars and a single seat fitted so what you're getting is the same old school tubular steel cradle frame, telescopic front forks and gas filled rear shocks; 19 inch spoked wheels; single disc front and SLS drum rear brake. 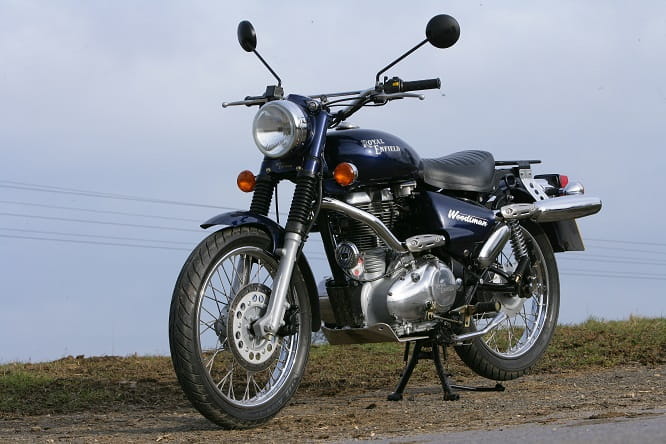 You also get Enfield's fuel-injected unit-construction engine which puts out 27.5bhp and 30.4ft-lbs of torque. Like a British single should, it thumps its way from a standstill on a lovely linear wave of torque and keeps going until a fairly respectable 85mph and makes life on A roads and the odd stretch of dual carriageway a lot more pleasant than it was on older Bullets.

Pull off the carriageway on to an A or B road and the new unit really comes into its own, plodding away happily at whatever speed you want it to without feeling stressed or overworked. Pop it in a high gear and let the torquey thump carry you along gently, or snick down a cog, open the taps and enjoy the roar of that high level pipe…perfect.

It’s just as happy in town too, torquey and very forgiving, with plenty of pull for slow manoeuvres and hills.

Helping this all happen is the 5-speed gearbox and 7-plate wet clutch. It’s certainly not as slick as the modern Japanese and European competition, but it does exactly what it's supposed too, without the false neutrals and clunky changes from Enfield’s-of-old.

As far as handling goes, there isn’t much difference at all. As mentioned earlier, the new Woodsman uses the same tubular steel cradle frame, telescopic front forks and gas filled rear shocks as the Electra model it replaced, and as a result behaves identically. It’s certainly no Featherbed, but it does the job of keeping things straight and upright and can cope with pretty much anything the motor can throw at it.

The heavy but positive steering demands just the right amount of rider input and although basic in design and feel, the chassis and suspension stay composed through all but the most aggressive of cornering.

Stray onto a minor road and things do start to get a little interesting, though. The whole set up begins to feel a bit crude, and it doesn't much like lumps and bumps, bouncing and lurching and throwing the machine off-line if pushed hard.

Just don’t expect too much from it and you’ll not go far wrong. 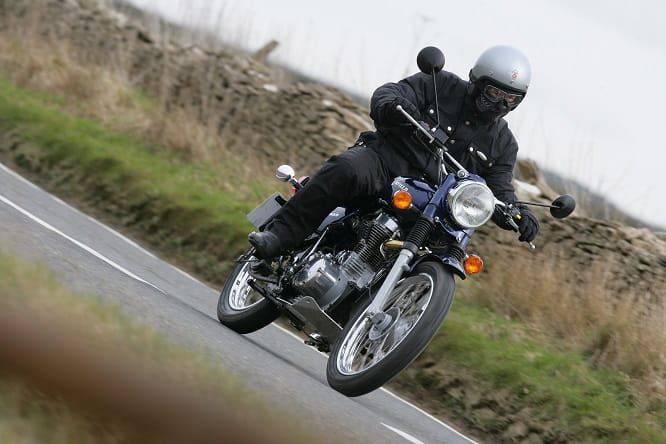 To be honest, I did find it quite difficult not to push things a bit on the Woodsman. The extra bit of power, the revvy nature of the motor, the ‘aggressive’ riding position from the trials bars, single seat and rear-set pegs, and the beautiful note from that high level pipe, all played their part in goading me on a bit…

I needn’t have worried though as the EFI Woodsman has a 280mm single disc and twin piston hydraulic caliper up front, and a 152mm SLS drum rear to help cool things down a bit. The disc does the bulk of the work of course, offering enough power and control for rapid and controlled stopping. As you’d expect, the drum isn’t as strong, but keeps everything nicely balanced when used in conjunction with the front, and works well enough for gentle stopping and balancing at low speeds. It’s a decent set-up and is more than capable of coping with the Woodsman's 187kg kerb weight plus rider, and should be able to handle the extra weight of a pillion too… Although if you do plan on taking anyone along for the ride, you’ll have to add a pillion pad and pegs to the shopping list. As the Woodsman is based around the standard Bullet chassis, most accessories for most models will fit.

It would be a shame to spoil the look though, as the Bullet looks rather nice in this stripped-down, street scrambler form.  The single seat/luggage rack, off-road bars, rear set controls, alloy engine bash-plate and gorgeous high-level exhaust certainly turns heads.

It all makes for a pleasant riding experience, as do the ‘modern’ ingredients Watsonian-Squire blended into the Woodsman’s spec: you get side and centre stands; an array of modern switchgear – including a handy headlight flash button; low fuel and engine management warning lights; indicators; electric and kick start; better fuelling and economy - the EFI motor will go north of 80 miles to the gallon, if ridden sedately. Add improved reliability, a comprehensive range of accessories and add-ons; a full dealer network and spares back-up; and the luxury of modern braking and lights into the mix and you can't go far wrong really. 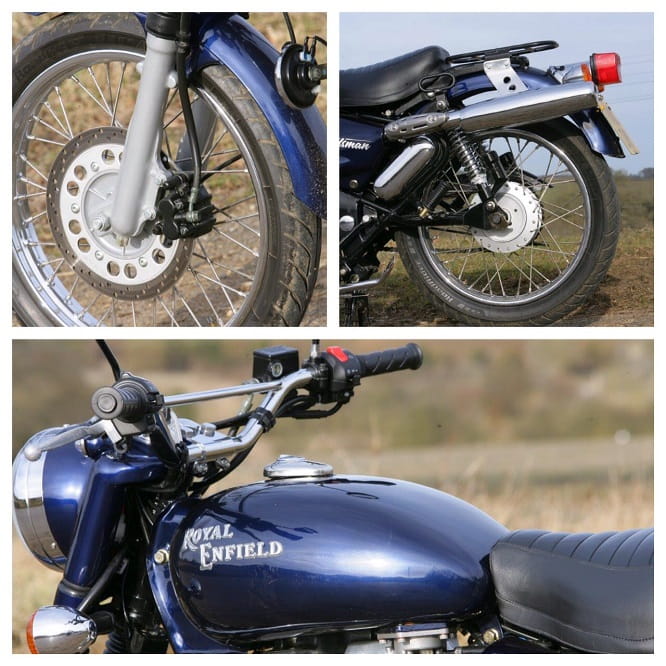 Ridden an RE Woodsman? What's your verdict?  or !