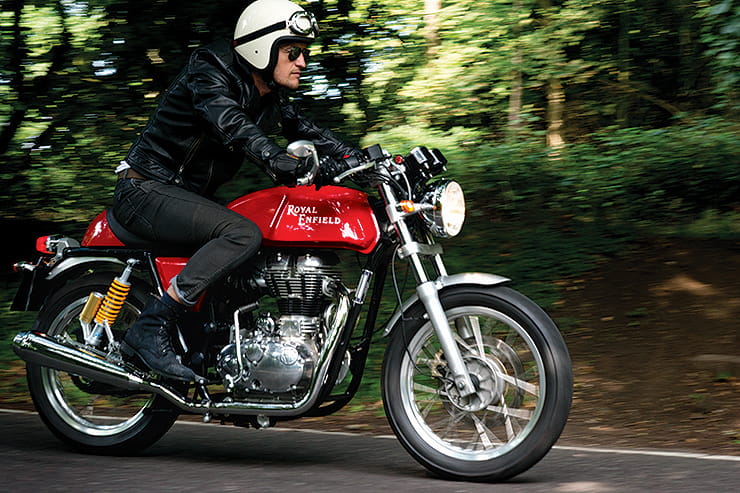 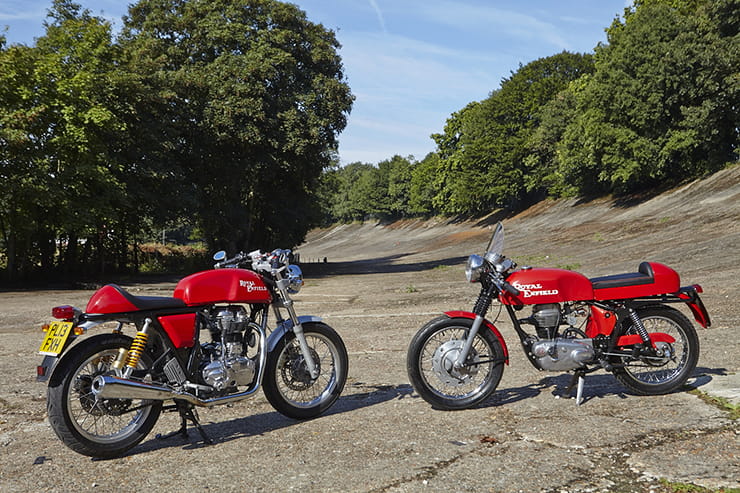 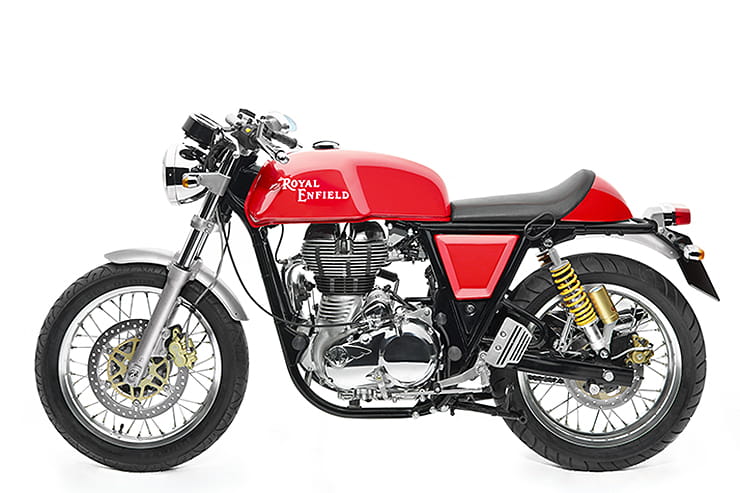 The Continental GT’s arrival in 2014 marked Royal Enfield’s Indian owners’ intent for the future, a path that has led to the hugely popular 650cc parallel twin Interceptor and Continental GT models. Far more than just a tarted-up Bullet, the GT was designed to appeal to the European market and evoke memories of the British (at that time...) firm’s famous bike of the 1960s that carried the same name. A bigger capacity engine, trick chassis and cool retro café racer looks, the Continental GT was, for Enfield at least, quite a major step forward in its model range when compared to the basic Bullet. If you are after a cool retro with a budget price tag and easy home maintenance, the single-cylinder Continental GT could be worth considering.

When it was launched the GT cost a very reasonable £5499 and it has depreciated fairly slowly over the subsequent six years. Enfields generally do very little real mileage (well the GT anyway, some Bullets do serious miles) and it is unlikely one will have more than 5000 miles on its clocks, which isn’t bad for a six year old bike! There again, would you want to cover over 1000 miles a year on one? Prices start at £3000 for an older 2014/15 model and rise to a maximum of £5000 for a 2019 bike with minimal miles. The problem here is that the new parallel twin Continental GT, which is an excellent machine although arguably the Interceptor is better, costs from just £5899.

With just 29bhp and 32.5lb-ft to play with, the Enfield feels quite asthmatic to ride. It certainly can’t be described as fast and due to its basic motor, which does like to vibrate your fillings out if you rev it, you are left underwhelmed by its performance. It can buzz its way up to the national speed limit ok but it feels and responds like a pretty old-school, and it has to be said not that inspiring, single cylinder. Which it is.

The Continental GT uses Enfield’s Unit Construction Engine (UCE), which was introduced into the range as a major update in 2009, shortly after the left foot gear change arrived in 2002. Upgraded to 535cc for the GT, the rest of the engine aside from an ECU remap and slightly reduced inertia flywheel is basically the same as the Bullet uses and that means tried and tested technology. Very robust, major problems are rare aside from its finish suffering if not well looked after. And the same goes for the gearbox, which is horribly clunky as standard but solid, and also the exhaust. A lot of Enfield owners tend to be more than happy to do their own servicing, which generally just consists of swapping the oil and filters, so don’t expect much in the way of a dealer service history. There again, if the bike has only covered 3000 miles there isn’t much to worry about as the service intervals are every 3700 miles. When it comes to routine stuff such as the air filter and spark plug (you don’t even need to remove the tank to access this), you can’t get much simpler and all-in it should take a competent mechanic under two hours to fully service a GT. And yes, despite the fact the GT has a kickstart, it does also have an electric boot... 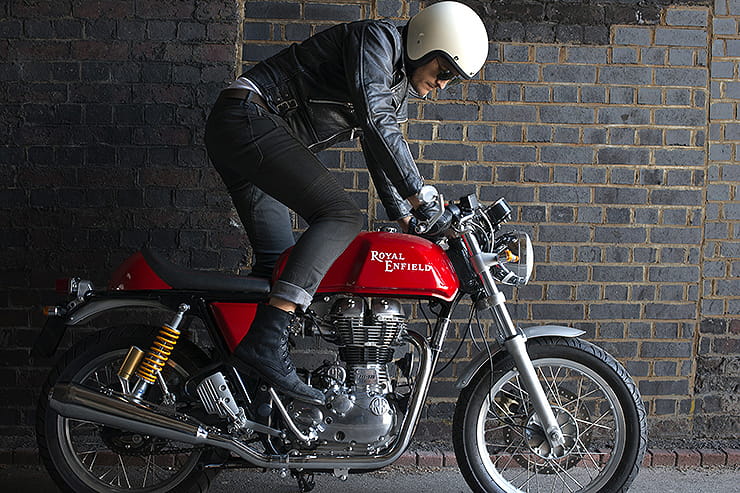 Enfield’s air-cooled single cylinder motor is fairly frugal and owners claim mpg figures that range from 50 to 80mpg, depending on the kind of use. It’s far happier pottering around at a slower pace and rewards you with much better economy than if you thrash it.

Where the engine is a bit of a disappointment, the chassis is a pleasing surprise on the GT – mainly down to who designed it. Thanks to input from Harris Performance (who Enfield now own) the GT is remarkably agile and eager to turn. Its low 184kg wet weight certainly helps matters but you have to hand it to Harris who really do know their stuff. The suspension is acceptable with the non-adjustable forks and twin shocks (which have preload adjustment) up to the job in most conditions. In town the GT is light and nimble but it is on the open road it impresses the most. When buying used give the spoke wheels a careful inspection because they corrode quite easily and while rusty spokes isn’t a huge problem area, tarnished rims is and they can make a nice bike look really tatty and are almost impossible to recover from a dilapidated state.

The single disc and a two-piston sliding caliper, which is made by Brembo’s Far Eastern offshoot company ByBre but branded Brembo, offers acceptable performance but it lacks ABS and is a bit devoid of feel. 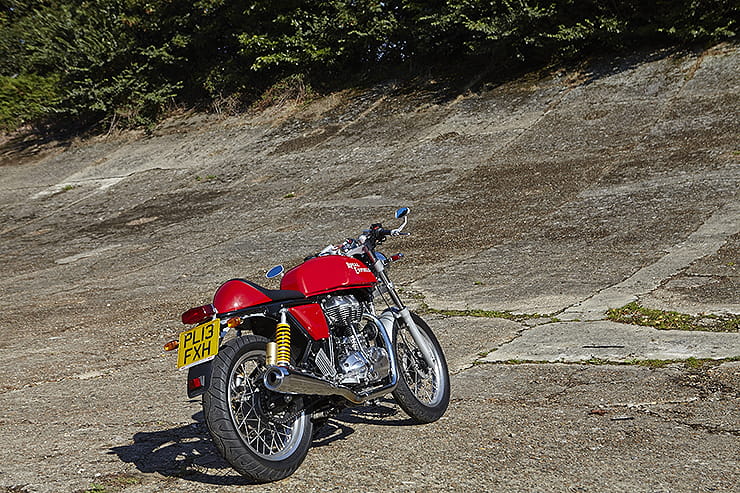 Due to its café racer styling the GT isn’t a very comfortable bike to ride. The seat is quite firm and the bars moderately low, putting you in a bit of an uncomfortable stance. Unsurprisingly, in the 650 models the more upright Interceptor is the better selling bike, proving that most riders want a relaxed riding position in their retro bikes. When you add the single’s vibrations into the equation it means that touring while not totally ruled out is probably not recommended. Or indeed done by many Continental GT owners...

Nope, not one. You get nothing on the GT in terms of rider assists but thanks to the popularity of the Bullet there are a few accessories on the market. Several specialist firms cater for the Enfield and you can get old-school indicators, replacements seats, a louder exhaust, screen, uprated shocks (Hagon make a set), bar end mirrors, the list goes on and on and there is even a range of official clothing from Enfield. Well there was, it has probably all sold out now or been used as cleaning rags...

The Continental GT is a bit of a relic from the time when Enfield weren’t being taken that seriously by European riders. It’s a basic single-cylinder motor that has been given a small power increase and stuck in a good chassis with cool looks. But in many ways this basic nature is also its major selling point. If you want a bike to ride for more than short hops, buy the 650 parallel twin. If you want a bike to remind you of the good old days, the 535 single is ok but also fairly limited in its use.

Three things we love about the Continental GT… 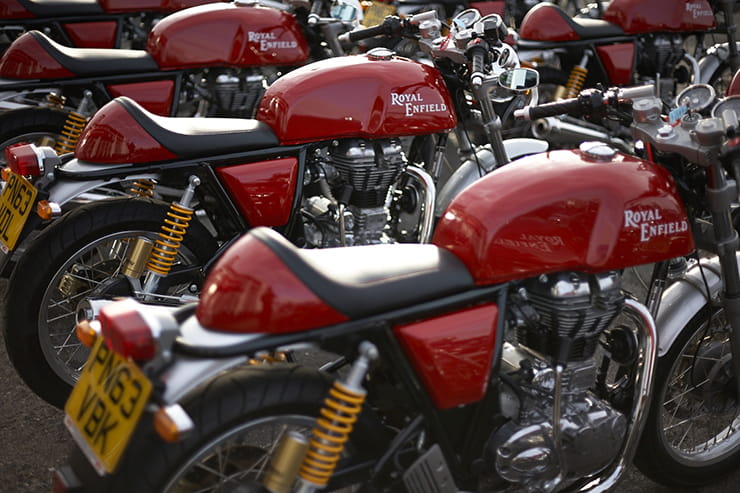