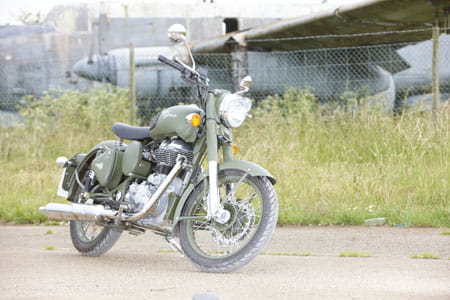 When I rode a Royal Enfield from India back to the UK in 1998, daydreams were the only way to pass the long days in the saddle.

Since I wasn’t married then, I spent much of the time thinking about past girlfriends, and when even that palled, I’d adopt a dazzling array of riding positions.

Lean back, and I was an American motorcycle cop in the Fifties, just about to pull someone over for driving a car without fins.

Lean forward, and I was a Second World War dispatch rider; lean forward more, on my way to victory in the 1957 Manx TT.

Well, how life imitates art, for now I’ve made at least one of those fantasies come true, with the aid of the Classic Battle Green from Royal Enfield. 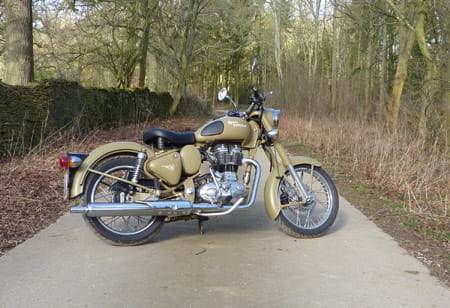 If your fantasy is not being a dispatch rider in war-torn Europe but riding into the desert to be alone with a camel, there is a Desert Storm version instead, but I wouldn’t bother, since it’s painted a disturbing shade of mushroom.

Whichever you go for, though, you’ll be taking part in a double celebration.

Number one is the fact that the Bullet is the world’s longest running production motorcycle. First made in Redditch in 1932, it shared its 80th birthday last year with Weetabix and Roberts Radio.

Indeed, I think some of the Enfields made at the plant in Madras it opened in 1949 to assemble then make Bullets for the Indian Army may well have been made from Weetabix, since several bits of mine fell off on the way home.

Then EU emissions regulations and the demands of UK customers getting used to old school looks with new school reliability from Triumph Bonnevilles and Thruxtons, Kawasaki W800s and Moto Guzzi V7s forced Enfield to up its game.

As a result, over the past few years, Bullets have become blessed with space-age gadgets such as electric starters, fuel injection and a unit construction engine and five-speed gearbox which rather than disintegrating once you hit 60mph!

Until then, you can enjoy every minute of acceleration which is brisk but not frantic, braking which will bring you to a halt in seconds rather than weeks, and handling which will seduce you into blissfully waltzing from bend to bend with gentlemanly aplomb.

And then when you stop at the Frog & Ferrett for a pint of Old Sparrowfart and a pork pie, you can admire the rugged matt green of the paint finish, the sprung solo seat, the exquisite chrome detailing and the cutest sidelights on God’s green earth.

Not to mention the fact that you are honouring the second part of that double celebration: Enfield’s proud military history of supplying motorcycle combinations to the British Army in the First World War, then in the Second, Bullets and the little 125cc Flying Flea.

Rather wonderfully, that was based on the German DKW, imported into Holland by a Jewish businessman who was sacked by the Nazis in 1938. He then sent the designs to Royal Enfield to create the Flea, which, dropped by parachute and glider, played its part in the Allied liberation of Europe.

So liberate yourself, and get your hand on a slice of history at the same time.