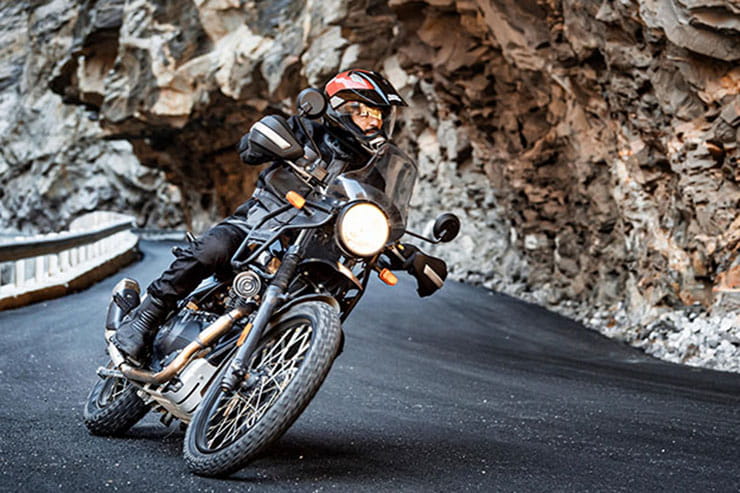 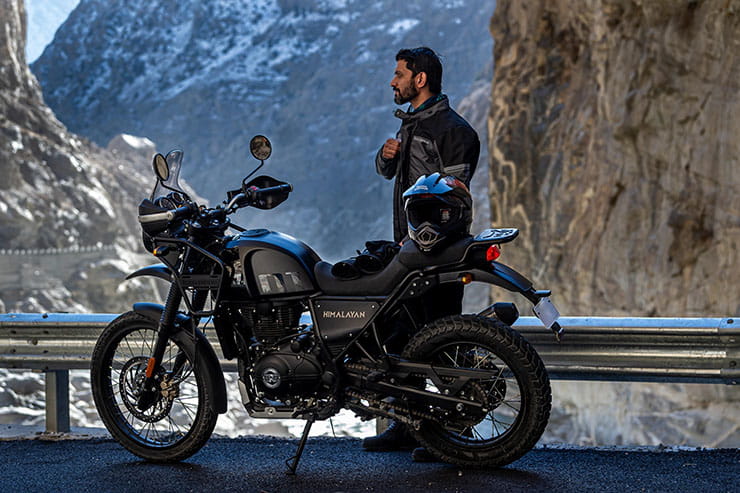 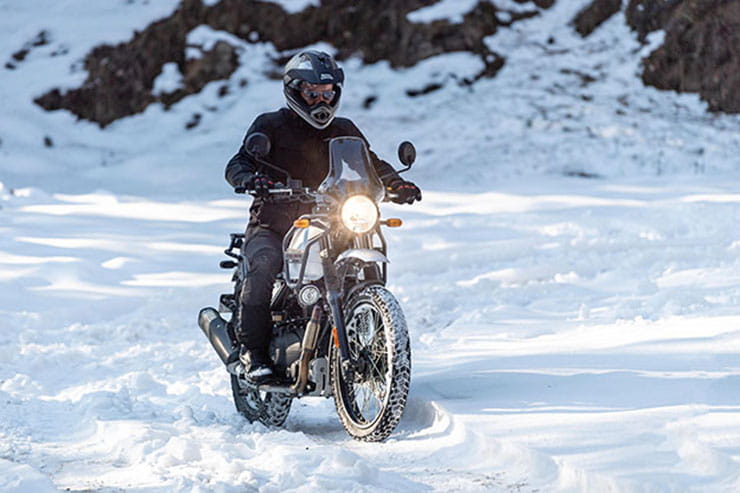 Here’s something that might surprise you. In the UK we love our adventure bikes and, predictably, the R1250GS (in both its forms) is the best-selling model. But what’s second on the list? The Africa Twin? Maybe a Versys? Could a KTM be in with a shout? Nope, it is none of the above – it’s the Royal Enfield Himalayan. Yep, in an age of techno-wizardry, the basic no-frills Himalayan is the UK’s second most popular adventure bike. Who would have thought that? Well to be honest, it shouldn’t come as much of a surprise because this bargain machine has been busy selling like hotcakes ever since its launch in 2018. What’s the secret to its success? There is no real secret – Enfield have just built a machine that is simple to maintain, fun to ride and cheap to buy. These factors, linked to the fact the Royal Enfield name still carries some weight with riders despite now being Indian owned (but with a British design team), have combined to make the Himalayan incredibly appealing to riders of all ages and levels of experience. Fancy trying one out? Here’s all you need to know...

The Himalayan cost under £4000 when new in 2018, a £1 under but under, nonetheless. Nowadays a new one will set you back £4699 or £4799 with a slightly flashier paint scheme. Despite still very cheap, this increase is quite a large percentage of the bike’s value – and that’s a bit of an issue in the used world. Even a well-used 2018 Himalayan will cost you £2500, which is only £1500 less than it did new, with the majority of them priced closer to £3500. A loss of £500 in five years? That’s incredible if you are selling, not buying. And it isn’t due to competition as there are loads of them for sale, so obviously the used market for them is red hot. If you want the updated 2021 model you need to pay about £4500, which gains you a Tripper Navigation pod and not much more. But here is the problem, with prices that high, are you better off just biting the bullet and buying a brand new one with a three-year warranty instead? It’s a close call...

Make no mistake, the air-cooled single cylinder motor is a bit of a slug. On the open road it can propel you up to 60mph with a reasonable degree of pace but overtaking traffic at this speed is more than a little worrying as you crawl past. If you are happy to live life in the more sedate lane, it is a good motor with a decent spread of power and only starts to vibrate with any degree of intrusiveness at the top end of the rev range. Is it right to moan about its lack of speed when the UK’s speed limit is 60mph, a figure it will merrily hit? Probably not and as it is A2-compliant it is legal for a wide range of riders to throw a leg over. Part of the Himalayan’s charm is the fact the engine isn’t demanding you to go flat-out everywhere, so you can’t complain too much.

Let’s not beat around the bush, the first batch of Himalayans built suffered quite a few mechanical issues and forums will merrily highlight each and every one. Everything from wiring looms breaking, coils refusing to work, clutches packing in, corrosion, blocked fuel lines, dodgy paint, you name it, the Himalayan has apparently suffered from it. But after a bit of a rethink (err, serious improvement in quality control...) by Enfield these issues are generally limited to very early bikes and owners report that the European models, which arrived later in the production schedule, are far, far more reliable. But there are a few things you need to be aware of when buying used, starting with servicing. Somewhat oddly, the Himalayan needs an oil change every 6000 miles but its valve clearances checked every 3000 miles! To be fair they are pretty basic to check as it is only a single overhead cam motor with two valves, whose clearances are altered via a nut and screw adjuster, and a check costs less than £100 in a dealers so it’s no biggy. It is always worth checking these have been done because they do often require adjusting. The paint on the engine is pretty thin and looks shabby quite quickly and a few owners have experience fuel injection issues, so always ensure the bike runs well on a test ride. In general, the actual mechanics of the motor are solid and so is the gearbox (only five speed) so as long as it sounds healthy you should be ok. As a lot of Himalayan owners do self-maintenance ( a service kit is less than £40), check for silly things such as a cracked sump bolt area due to over-tightening, leaking oil cover etc. The exhaust isn’t of great quality on the Himalayan but as the bike is still quite young, cracks shouldn’t be an issue however owners do report rust can develop where moisture gets trapped. The 2021 Euro5-update makes no significant changes to the engine’s character or performance. 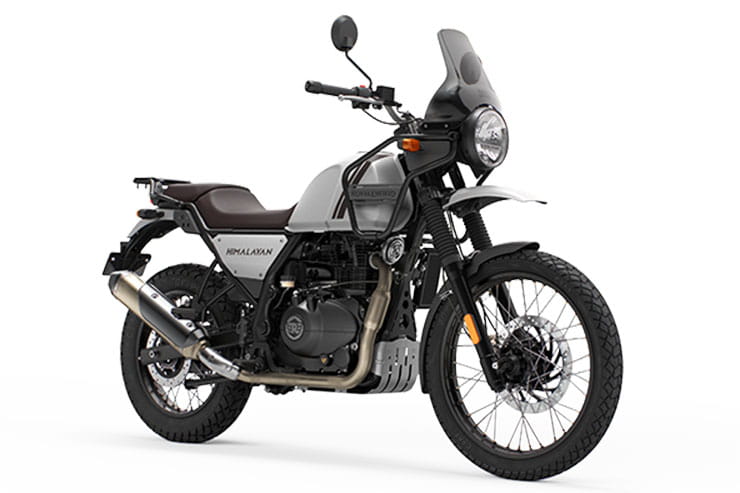 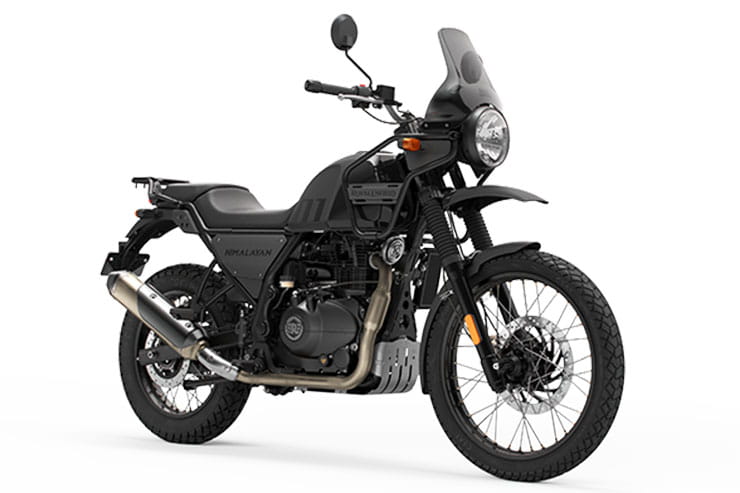 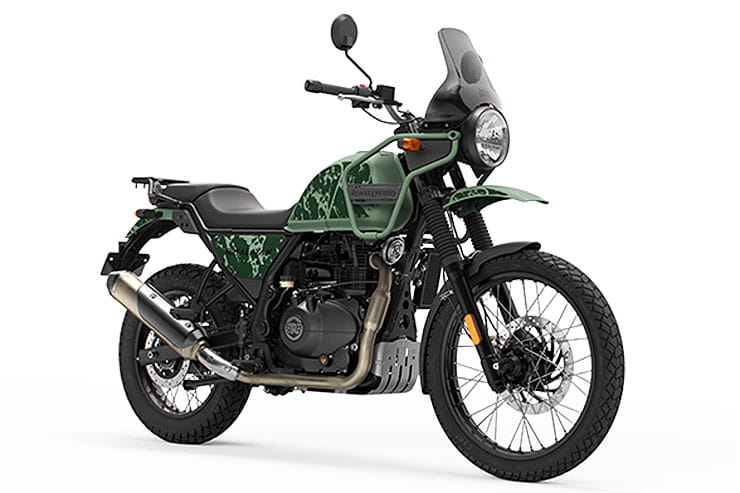 One of the Enfield’s major draws for owners is its cheapness to run and that includes fuel economy. Despite generally being ridden quite hard, the motor will merrily average 60mpg with 80mpg on the cards should you be a bit more gentle on the throttle. That’s not to be sniffed at and if you also factor in home servicing and low insurance costs, it all equates to a cheap motorcycle to own. And if you do crash it, spare parts are pleasingly cheap as well!

To be fair the Himalayan is a real surprise in the bends and is far from a poor handling bike. Weighing just shy of 200kg it is a touch chunky considering its lack of power, but it feels pleasingly light and is very easy to manoeuvre and live with in an urban environment. The non-adjustable forks don’t dive too badly, and the shock can have its preload altered if you want to add a pillion or luggage. Considering it comes armed with chunky tyres (from a non-mainstream brand) and has a skinny 21-inch front wheel, the Himalayan isn’t bad on B-roads, and you can merrily zip through bends in a way that you can’t on some more off-road targeted mini adventure bikes. But much like the engine, it’s not all good news. It seems as if Enfield are a bit stingy with the grease when assembling the bike and a lot of owners have suffered from things such as seized wheel spindles, worn head bearings, seized or rusty suspension linkages, all silly failures that a bit more care at assembly would have avoided. If you buy a used one, spending a bit of time greasing parts may well prevent future woes. The suspension, which is admittedly quite budget, seems to be fairly robust but the overall level of finish does come into question with rusty spokes, flaking paint and even rusty chassis amongst the complaints from owners. It seems that any exposed metal parts won’t withstand much in the way of salt so being diligent with an anti-corrosion spray is highly recommended if you want to keep your Himalayan looking good. There again, what do you expect on such a cheap bike?

Yes.... This is a bit of a problem. The Himalayan comes with braided lines (good), ABS (legally required) and the rear brake’s ABS can be deactivated for off-road use on post-2021 models (handy if you want to) but the two-piston single front caliper is pretty poor in its braking performance and very wooden in its feel. A lot of owners are left very disappointed by it. A change of pads does restore a bit of lost bite but really there isn’t much you can do, and you quickly learn to use the rear in combination with the front when you need to stop quickly. 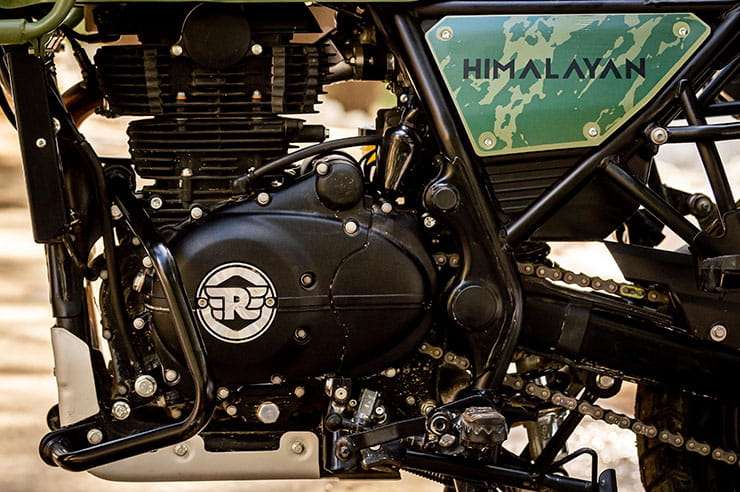 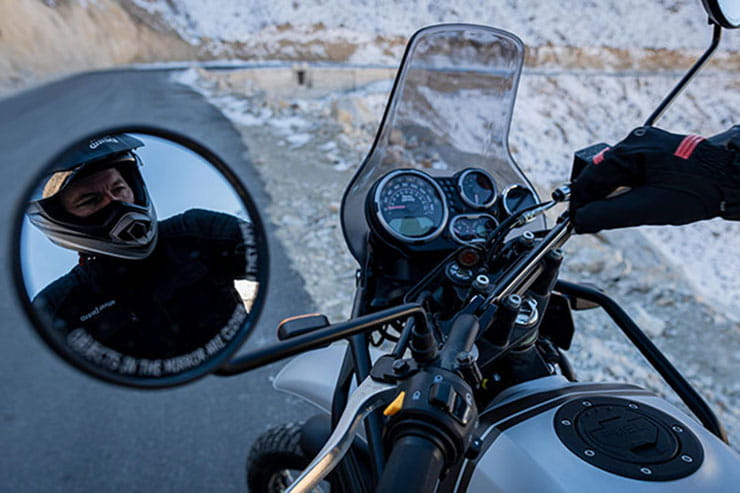 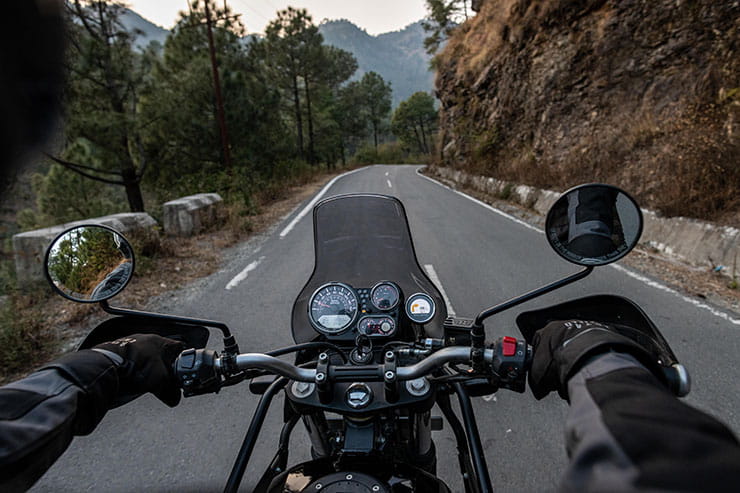 It’s a game of two halves for the Himalayan in terms of its ability to cover miles because while you get a 200-mile tank range and a very comfortable riding position, not to mention the option of adding luggage, the seat is annoyingly firm. If you either have a well-padded bum or fit a comfort seat option (or a gel seat pad) you can most certainly tour on a Himalayan, but in standard trim it is just too hard on your backside to be classed as a mile-muncher. Which is a shame.

ABS has always been on the Himalayan but the ability to switch off the rear caliper’s ABS was added in its 2021 update alongside a Tripper Navigation pod, which links to Enfield’s smartphone app to bring turn-by-turn navigation. It’s a really simple and neat system that is well worth having. The dash has a digital compass (if you get really lost...) as well as a fuel gauge and that’s about it in terms of tech.

When it comes to accessories a lot of owners fit brush guards, luggage is also popular, a few add extra crash protection and guards and there is also a smattering of taller screens, loud pipes and better-quality tyres. Royal Enfield have own range of accessories, all of which are very well priced, but due to the bike’s popularity, aftermarket firms are happy to also supply you with bits. Generally, a set of bark-busters (handy for bouncing off trees or cars...), luggage and crash protection is all you need. Oh, and a softer seat...

The Himalayan has been a massive seller for Royal Enfield all over the world and you can see why. An unassuming and basic bike, it gets on with the job in hand and is a charming machine for plodding around on. It’s not very tech-heavy, which in many ways works in its favour, and the price tag is extremely tempting. If you are after a bike to mooch around at 60mph that will cost you very little own, the Himalayan is spot on. Yes, its build quality is a bit questionable but considering the price tag, it’s hard to complain too much.

Three things we love about the Himalayan… 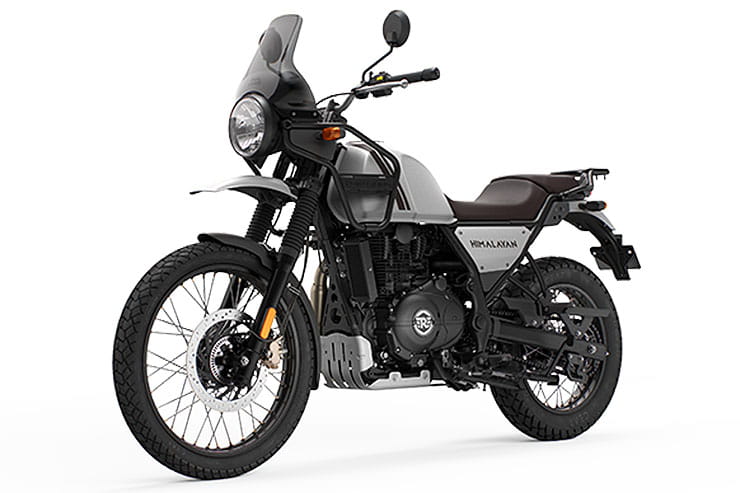 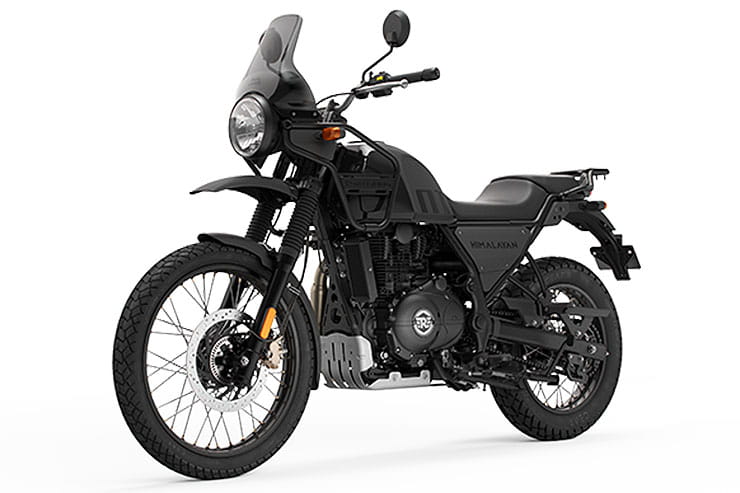 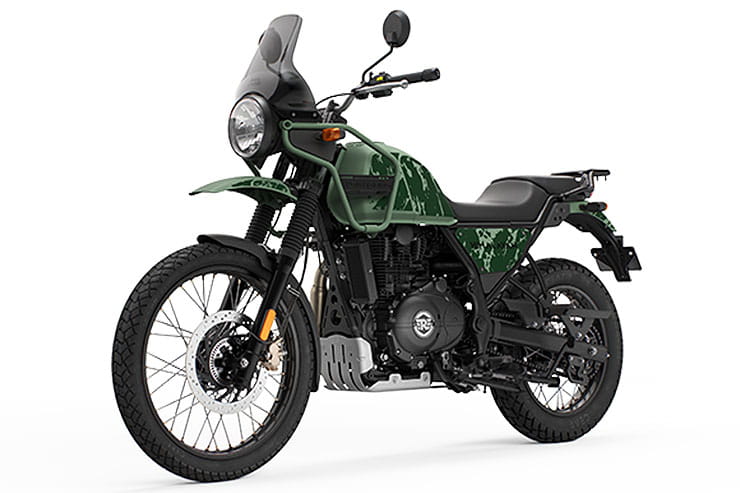 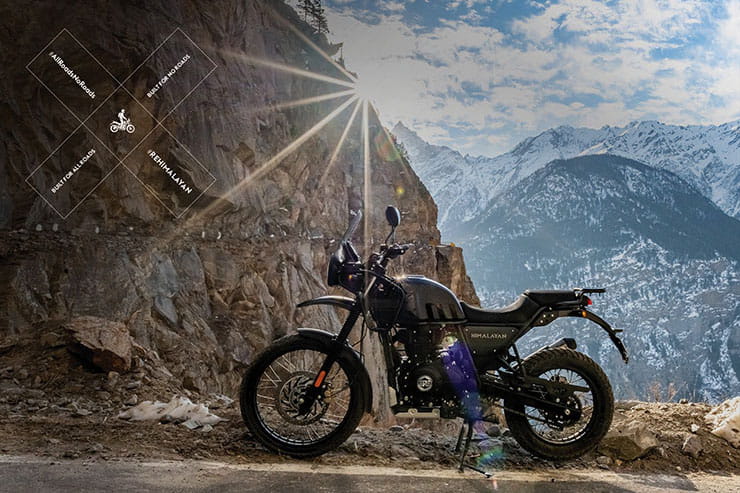