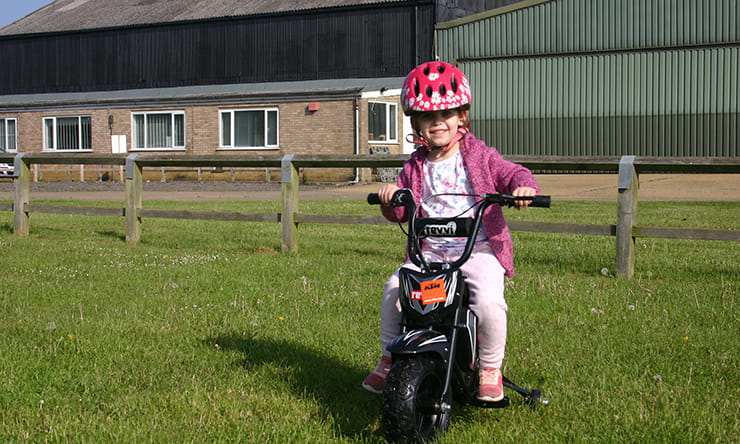 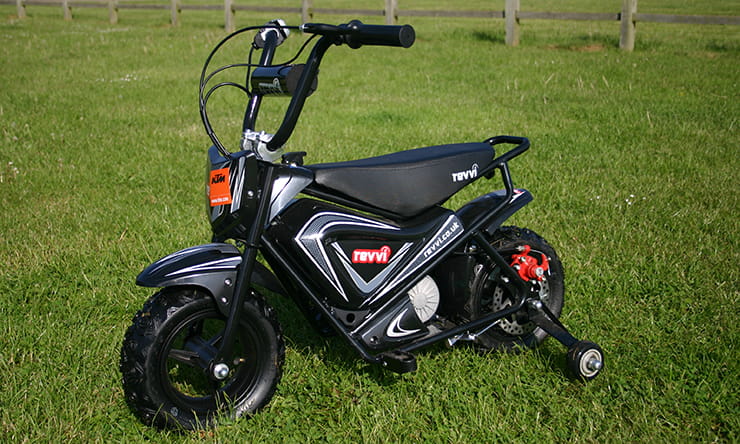 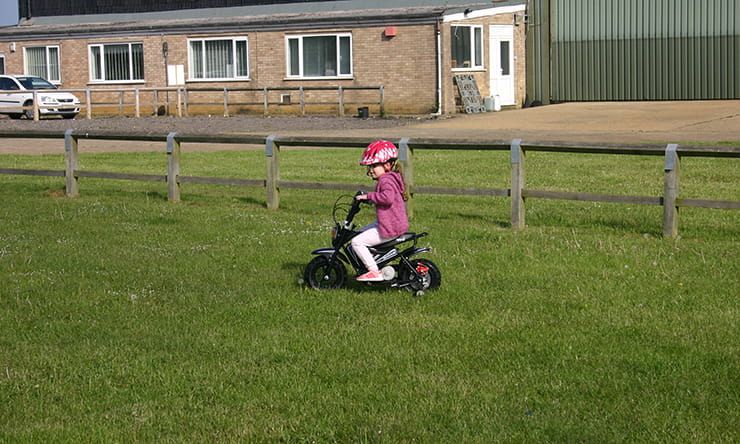 It’s no secret; most motorcyclists would like their kids to follow in their footsteps when it comes to a passion for bikes. Well, maybe not all, but I know I do! I also know that my four-year-old daughter, Bella, is as much of a bike fan as any of my full grown biker mates.

So, when the opportunity came to test Revvi’s electric bike, we both jumped at the chance. We have had the bike for about three months now and whenever the weather is good, it’s her first-choice thing to play with, whether we're in the garden or out and about. 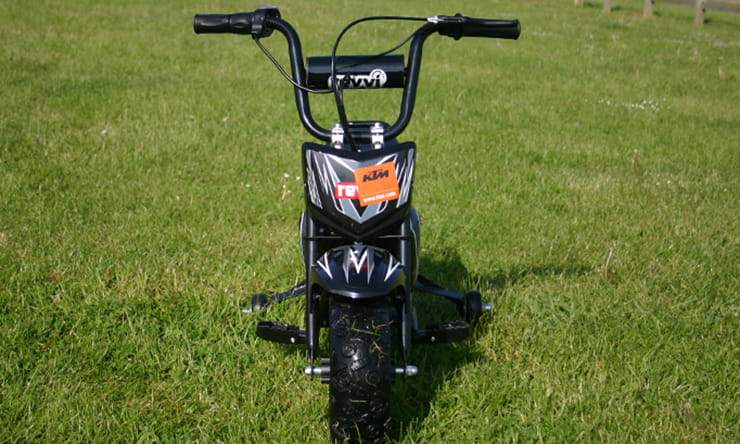 The Revvi comes in an almost ready to run state in the box. All tools are included to build the bike (I managed to bend the spanner!) and the instructions are refreshingly clear and easy to understand. The build took about half an hour and then the bike was ready to go. The battery was nearly full meaning if you bought this as a present for your child, they could help you build it and ride it, straight away. 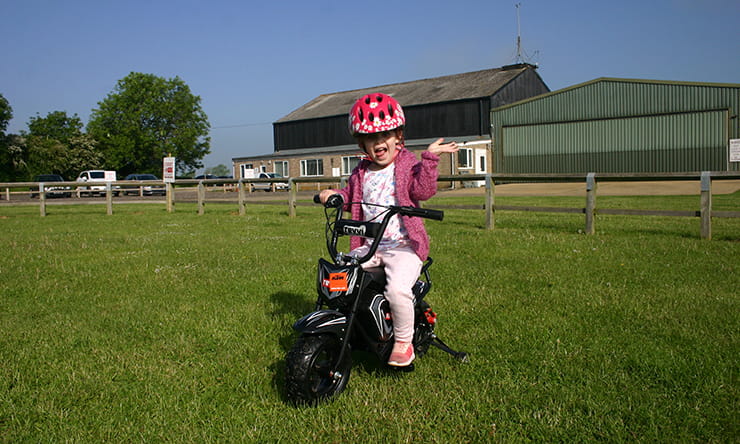 Priced at £249 the Revvi is first and foremost, very good value. If you have ever thought about buying your child an Oset or a Kuberg electric bike, where even the smallest and cheapest bikes retail at about £1000, there is always that nagging doubt – will they like it, is it for them? The Revvi removes some of this risk by being such good value. 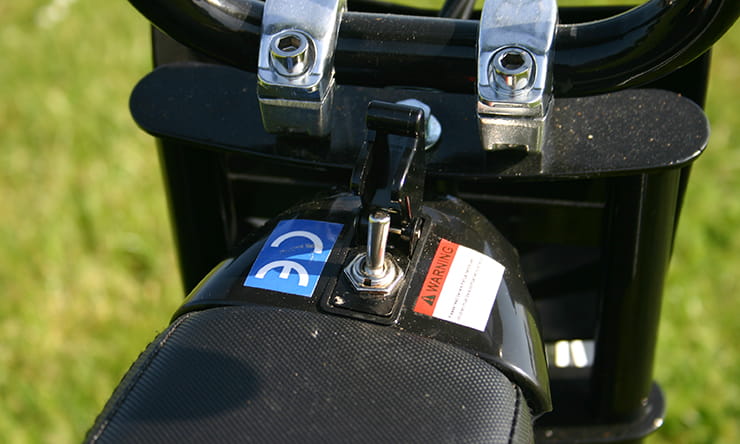 The Revvi is powered by a 250w DC motor. The motor is plenty powerful enough for Bella and did take some getting used too. To start with she would open the throttle all the way, taking off down the garden. It took a couple of hours for her learn the dark art of throttle control and can now manoeuvre the bike more accurately than I can! 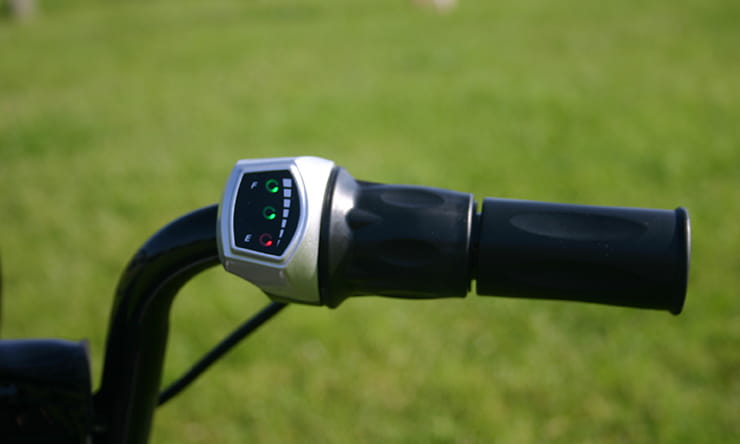 The Revvi has two speeds, high which is about 12mph (or a swift jog if you are trying to keep up!) and low which is about 5mph and means you can easily keep pace walking briskly. To alter the speed you have to lean the bike over and locate the small hole on the underside of the bike. If you put your finger inside you will feel a small switch that changes the speed. It’s quite a fiddle to get at which is good, it means that Bella can’t accidentally adjust the speed herself.

Controlling the bike’s speed is a throttle twist grip just like you get on a full sized bike. It’s about a quarter turn from shut to fully open and modulates the speed smoothly and without any jerkiness. 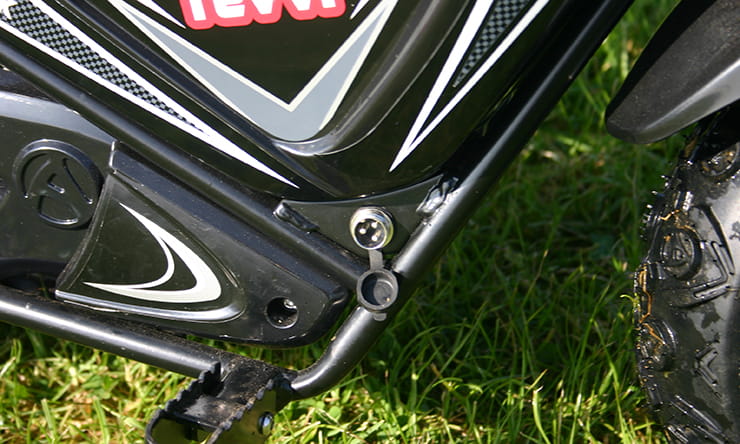 Inside the Revvi there are two 12V (10ah) batteries kicking out a total of 24volts. Revvi state a charge will last about an hour but I have found it be more like double this. When the juice needs replenishing there is a charger enclosed in the box that runs off a standard domestic plug socket and will charge the battery in about four and a half hours. Once it’s full, the charger unit will show a green light and then should be unplugged. Revvi don’t recommend leaving the bike plugged in overnight as this could overload the sealed lead acid batteries.

Keeping tabs on the charge is easy with the built in power gauge in the right-hand twist grip. Three lights show whether the battery is full, half full, or empty. It’s clear, easy to read and Bella now understands what ‘range anxiety’ is. 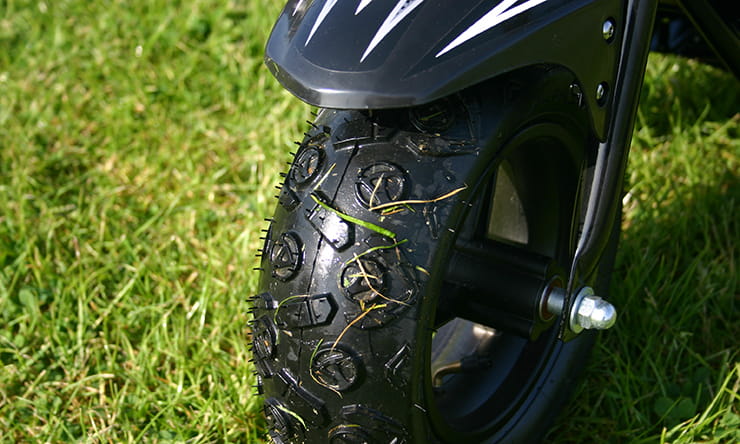 One way Revvi have kept the price of this bike down is it’s chassis and fork set up. The Revvi is a solid frame meaning it’s doesn’t have complicated suspension parts and swingarms, which add weight and cost. That said the Revvi does not seem built to a budget. I have had a good poke around beneath the panels and found the quality of all the parts used, from the frame to the electrics, to be very high.

Smoothing out the bumps are fat, balloon tyres that are covered in a chunky tread. I found the bike performed better on grass after I dropped the pressure in the rear tyre just a fraction from stock. 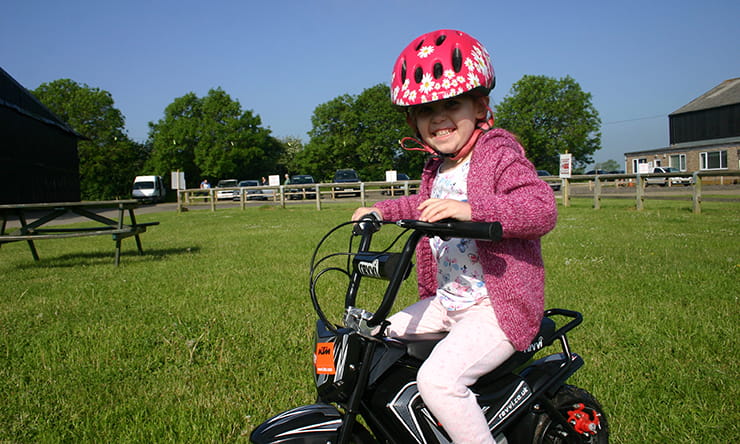 Weighing in at a sturdy 23kg the Revvi is too heavy for Bella to lift on her own but not too big for her to wheel about if she misjudges a turn and needs to back up. The great thing is she can just get on it and play, without having to call me away from the MotoGP if she gets stuck!

It’s hard to describe how a bike rides when it only does 12mph and I (cough) haven’t ridden it… much. But it’s really good fun. It’s got quite a large turning circle but apart from that it’s just like a real, full sized bike. Bella’s even experienced the joy of skids and burn-outs – what could be better than that! 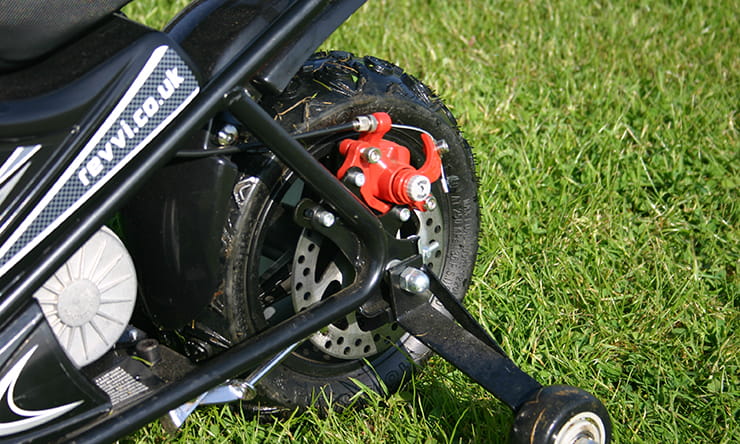 Keeping the bike out of the hedge is a large, powerful, cable operated disc-brake on the rear wheel. The brake is the same sort you get on mountain bikes and is more than up to the job.

A really good feature is a small micro switch in the lever that cuts the power to the motor as soon as the brake is pulled. This helps stop the motor burning out and also means the bike slows more quickly.

It probably took about two weeks of riding every day after nursey to get to grips with using the brakes to slow down and not her feet. 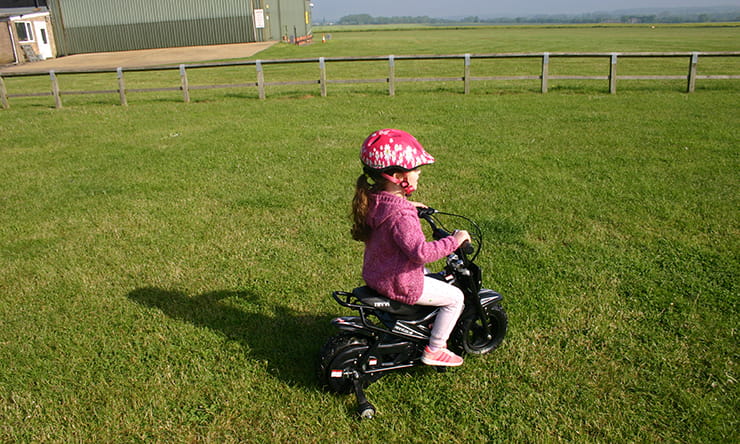 When a child is having this much fun comfort doesn’t really matter does it? What I can say is the bike looks perfectly designed for children from three to ten years old. With a maximum rider load of 75kg, we have years of fun before this bike is outgrown.

The Revvi is a really cool bit of kit and the kind of thing I’ve been looking for since Bella took an interest in bikes. I was initially looking at one of the more expensive trials bikes from Oset but couldn’t justify spending £1000 on a bike that she might not like.

The Revvi’s provided Bella with a first experience on two-wheels that is controlled and safe, and fun. She absolutely loves this thing and wants to take it everywhere, good job it fits in the boot of the car really. 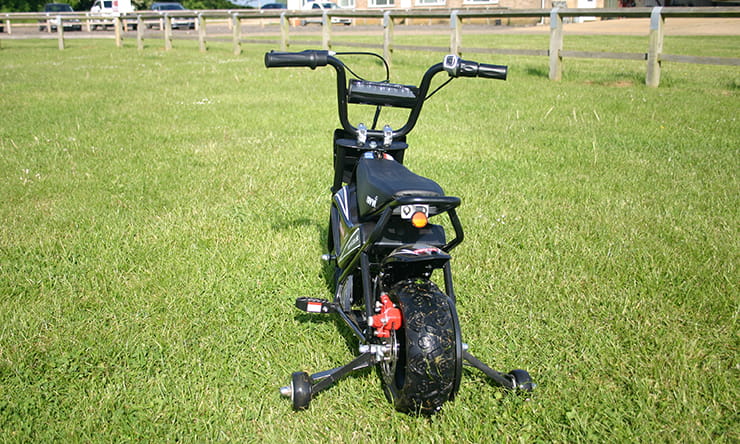 Three things I loved about the Revvi…

• A safe, good value and fun intro to motorcycles 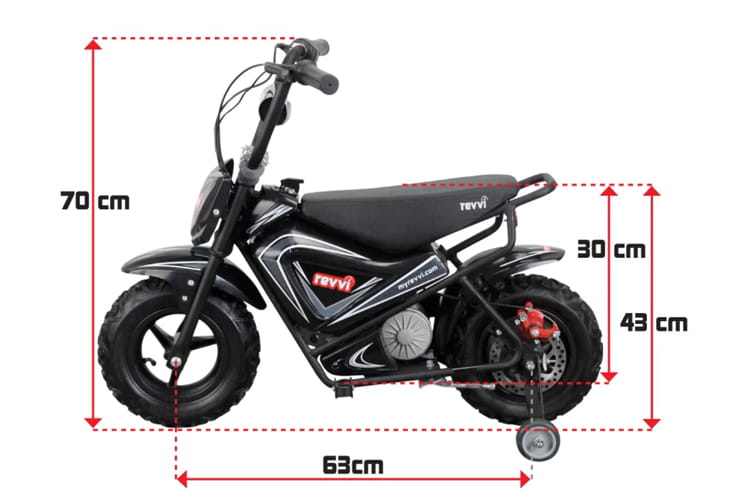