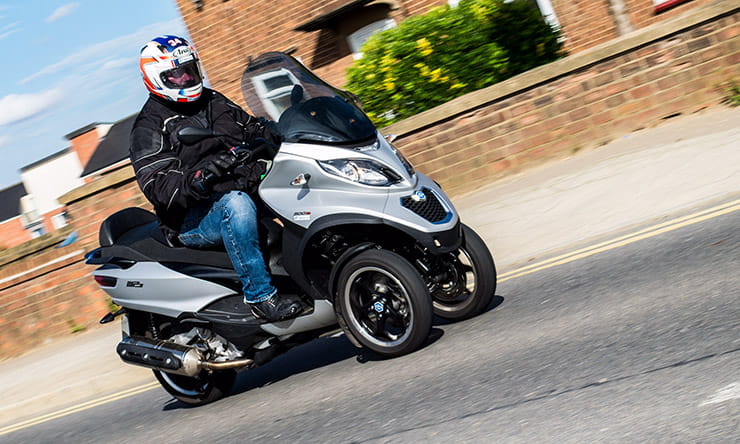 Away from the glamour of the overseas press launches and the constraints of our group tests, each week Bike Social's Scott Redmond takes a new bike and tests it in his real world environment. From nipping to the shops (usually for cake) to clocking up miles on the A1, Scott gives us his verdict on what he likes and what he doesn't. This week he's gained a third wheel for a date with Piaggio's 'big-on-the-continent' £7736 MP3 500 Business.

Piaggio know a thing or three about scooters. They have focused on building two wheel small capacity scoots for many a year, and it might surprise you to learn that their three wheeled MP series of bikes have been around now for 10 years.

Like me, you’ve probably never slung your leg over one of these quirky vehicles before, so . when an opportunity knocked for me to get on board the MP3 I took the offer up - after all it’s good to try new things, even if they’re a decade old.

The MP3 isn’t small, it’s got a wheelbase of 1549mm and weighs in at a hefty 261 kilos. With only 40 horses from the 500cc four stroke engine to push it all along, you know that it isn’t going to be a speedy affair. So if stick in the mud motorcyclists aren’t the target audience, who is?

Many manufacturers have designed and developed ‘bikes’ to appeal to those who travel inside a cage. BMW took the idea of 'a scooter with a roof' with their C1 at the turn of the millennium. It lasted just a few years, and history is littered with other unsuccessful attempts.

Piaggio saw adding an extra wheel as the key to this ageing desire to tempt car drivers out of their tin boxes. In some respects Piaggio have succeeded. On the continent the MP3 is something of a hit. The French in particular lap them up but, in these post Brexit days, comparing us in Blighty to those across the channel isn’t a good idea. We see things differently and the MP3 remains largely a novelty item here in the UK, although visitors to the capital may well notice them on a daily basis. The Metropolitan Police has a fleet of 41 MP3s to help them beat the city traffic.

Are we being blinkered or is the MP3 really Euro trash? There’s only one way to find out. I wanted to sample one for myself. 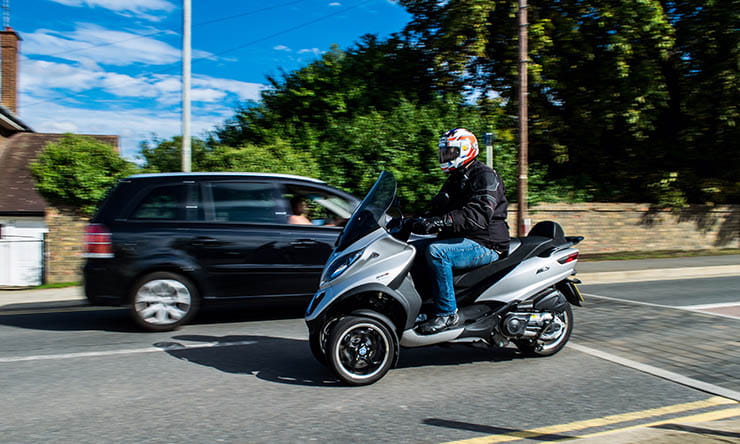 Approaching the MP3 is where you realise how much of a lump this machine is. The seat is Land of Leather massive and quite high too, which does allow for ample under seat storage. There’s even a power point under there, and some flimsy carpet like trim too. Nice.

If you’ve ever ridden a maxi scooter then the ergonomics will be familiar. There’s plenty of knee room and generous space for your feet to rest, with only a clumsy looking rear foot brake disturbing the flatness.

Striking up the MP3 is simple enough. Pull in the rear brake lever, thumb the start button and the 500cc single wakes up and awaits instruction. The MP3 is fully automatic, pure twist and go. The front suspension can be locked when the bike is stationary and there’s a centre stand fitted, but I never deployed that once during my time on the MP3. Unlocking the suspension gives you your first taste of the weight. It’s carried low but with your feet on terra firma, it’s clear this bike is a chunker.

Pulling away is just like riding any other rev n go bike but what isn’t so familiar is the leaning sensation that’s a trademark of the MP3. The two front wheels are attached to independent suspension legs. The latest version uses 13 inch wheels up front, an inch more than the older model, and both have a 258mm brake disc clinging to them. The MP3 can achieve a maximum lean angle of 40 degrees in total safety although it takes a little time to adjust to.

I headed straight towards Peterborough city centre where I quickly faced a bunch of roundabouts to negotiate. Any hesitation in the MP3s progress was totally down to me. Sat bolt upright you simply tilt the MP3 in and it steers itself around. After a few tilts to get the hang of the sensation, I was converted to the idea. It feels totally safe, in fact it made me attack bends and roundabouts just that bit harder than I would on a standard bike, partly to get to grips (no pun intended) with the MP3 but also to explore if the twin rims up front were any better than a normal motorcycle.

Like all things in life, you win things and you lose things. With its cornering and urban capability explored I set off for the A1 and headed south. I had toyed with the idea of hitting Cambridge, but with heavy traffic on the A14 I parked that idea. The MP3 is lousy at filtering and the thought of sitting in queues didn’t appeal.

Those 40 nags have their work cut out on the open road and once you’ve hit the 60mph mark things get a bit tricky. Your average HGV is restricted to 56mph and winding up the MP3 to overtake a forty foot trailer and additional length of the tractor unit left me feeling wary. There’s next to no immediate acceleration and although there are mph to be found, they give themselves up slowly. By the time you’ve executed an overtake there’s a stream of eager road users right up your solitary rear wheel. I have seen articles quoting top speeds of anything between 90 and over 100mph, but if I touched a genuine 70mph I’d be amazed.

I couldn’t help to imagine if a paddle type gear change like the Honda system might improve things? Maybe the next generation of MP3 might come armed with something along these lines? Of course, we mustn’t forget that the MP3 is about as aerodynamic as a fridge freezer, so not all the blame lies with the single cylinder engine.

I left the A1 behind in my user friendly mirrors and took myself off into the Cambridgeshire and Bedfordshire countryside. The tinges of autumnal colours appearing on the trees that lined the roads we travelled. I was keen to see how the trio of wheels would deal with bumpy roads and found plenty to sample. The answer is they coped brilliantly. The MP3 excels over poor road surfaces. It’s almost quad like, well except for the lack of a fourth wheel. Tipping in to sweeping bends and banking harder for tighter bends, the MP3 never gave me a single moment where I clenched my cheeks. Its road holding is surprisingly superb. It was all going so well until we encountered some hills. Once again the rev and go delivery struggled to convert its bhp into healthy progress. The harder I pulled the throttle the less urgency was delivered to the rear wheel and again I yearned for some way to interact with the engine and transmission. Those two 240mm discs up front aren’t very effective either, although dabbing front and rear brakes together brings the MP3 to a halt within an acceptable distance.

Fuel consumption figures online suggested anything from high forties to low seventies per gallon. With a 13 litre tank that’s situated in the bowels of the bike, I had hoped to hit somewhere between 150 and 200 miles from a tank, based on the information that I had mugged up on. Again the MP3 short changed me. With just over 120 miles up the orange low fuel light lit up. The needle on the fuel gauge had already nose dived into the danger zone marked out in red.

I zig zagged my way back to Peterborough and caught up with a friend. With the temperature in the mid twenties I needed a cold drink, so we met up at a McDonald’s. Too hot to get off the MP3 I opted for the drive thru. In the past I’ve been refused service when riding a motorcycle through the drive thru lane. Arriving at the collection window the member of staff did a double when I rolled up to her window. She laughed and asked where was I going to put my icy cold beverage. Due to a lack of cup holders being incorporated into the MP3s car inspired dash, I gripped it in my left arm and was able to ride away one handed, yet safely and into the car park.

My adventure into the world of the third wheel was nigh on complete. I reflected on my findings and weighed it all up. There’s definitely something appealing about this concept. Handling wise I had no quibbles, but the engine performance, or rather the lack of it, rains in its parade. The MP3 isn’t quite music to my ears.

Storage, plenty of space for a full face lid and other stuff.

The engine, it lacked oomph and also vibrated a fair amount.

Fuel consumption, it needs to be better on petrol, cars deliver more mpg than this, not a good advert to tempt car drivers to use one.

Build quality, several fasteners were already rusty, this on a 16 plate bike. 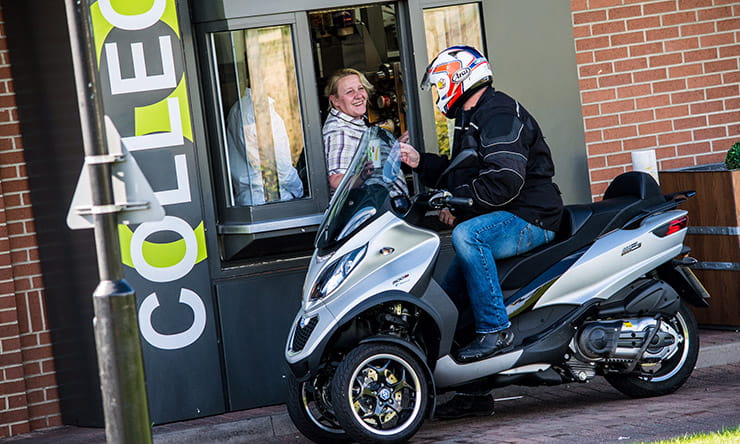