Over the past three decades Peugeot scooters have become a familiar sight on our roads, but it's only relatively recently that the French manufacturer dipped their toe in to the maxi scoot pond.

Just like their cars, Peugeot offered up multiple versions of the Satelis; three engine sizes, two levels of specification and a miriad of bolt-ons and options. Not content that we were already slightly dazed and confused, Peugeot added another selection to the menu; the Satelis RS. Essentially it's a sporty version of the 'Premium' model with a moody paint job, black alloys, tinted low screen and... well, that's about it really.

Styling aside, the RS is essentially a standard Satelis 250 Premium – Premium being the sort of entry level model, which comes without the ABS-PBS, immobiliser and ABUS integrated chain lock you get as standard on the more expensive Executive – but is the same price as the Executive. Confused? Well, it's fairly simple, you pay the same as the Executive, but don't get the fancy extras thrown in, instead you get a Premium with a paint job. 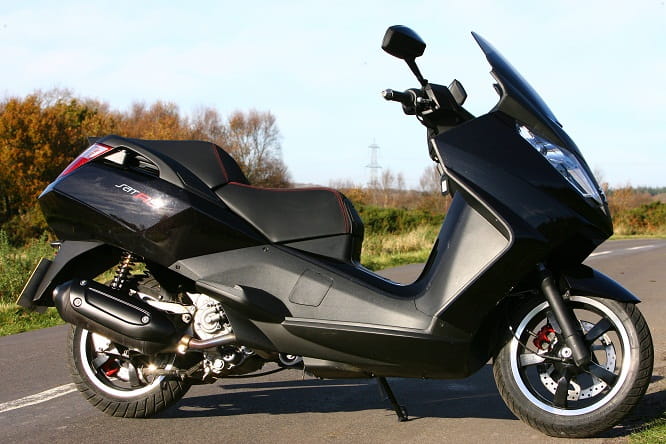 Before you switch off, the Satelis 250 – in whatever flavour you choose – is a cracking scooter. It uses a proven Piaggio 244cc, liquid-cooled, four-valve, four-stroke motor, with a few extra tweaks from the lads and lasses in France. It's smooth and torquey in the low to mid ranges, punchy and responsive at the top end. It'll potter round town with ease, dart in and out of traffic, accelerate away from the lights like a 500, overtake on A-roads with little effort and sit quite happily at motorway speeds. It's fuel injected and catalysed too, so consumption and emissions are nice low.

Equally as accomplished is the chassis. The frame is a bog-standard tubular steel cradle, bolted to that are 37mm telescopic forks up front and a four way pre-load adjustable twin shock rear and 13 inch alloy wheels. It's pretty much the same set-up you get on the Premium, except for a 5mm shorter wheelbase, designed to sharpen things up a bit. That is does: steering is light, responsive and positive, helping no end with traffic carving, but remains stable and confidence inspiring once out of town. I had no complaints for either front of rear springs on the standard settings, you do get a little jarring from the rear, thanks to the unsprung weight of the motor, but both ends feel a lot more sophisticated than many other quarter-litre offerings. It's not quite in the same league as something like the Nexus 300, but for a standard scooter set-up it's pretty impressive. 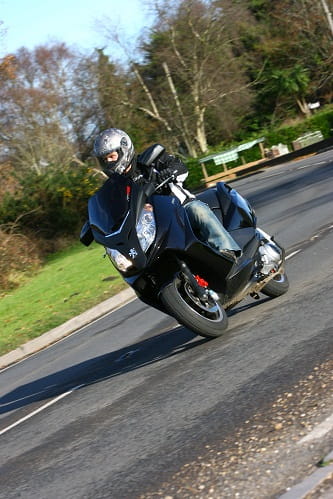 Also more than adequate are the brakes. Again, it's the same set up as its brethren; a single 236mm disc and twin piston calliper up front and a single210mm disc, single piston calliper at the rear (the callipers are red, by the way). As mentioned earlier, there's no ABS-PBS on the RS but both ends work fine, with plenty of stopping power, feel and control.

While all this is going on underneath the rider, he or she is treated to quite a nice seating arrangement. The seat height is nice and sensible at 784mm and is tapered nicely to allow shorties a firm foot down. Lanky types will be just as happy too, as there's plenty of room. Pillions won't be quite as happy, as they sit quite high up and have a bit of stretch to reach the low-set grab rails. This aside, the rider is sat upright enough to cope with busy town centres and laid back enough for long distance.

Bodywork and screen offer as much protection as you could want and if it doesn't, you can add side spoilers, hand guards and a taller screen – the RS comes with a short, sporty one and might not be enough to keep six-footers out of the breeze.

And that's just the tip of the iceberg as far as bolt-ons go.You can get just about anything you can image fitted to the RS; top box, sat-nav, alarm, bar ends, chain lock, passenger back rest and a remote push button boot lid opener thingy...

Options aside, it comes pretty well equipped as standard. The dash display is comprehensive and easy to read on the move; it's a digital/analogue combination and tells you everything you need to know to maintain forward motion and legality. Dotted around the fairing are some pretty neat cubby holes for all your bits and bobs, and the large underseat storage area opens from the rear – like a car boot – and can swallow a lid, lock and waterproofs without too much fuss.

The mirrors work well, all the buttons and levers are in the right place and you get side and centre stands too.

The RS is a pretty impressive package; it goes, stops and handles as well as something twice the price and capacity, is well specced with some neat practical features, looks good and comes with decent dealer back-up and list of options as long as your arm.

The Satelis didn't sell in as big a numbers as it's more well-known competitors, which means finding one can be tricky, but if you do stumble upon one, they're well worth a look and can be picked up for as little as £1250. 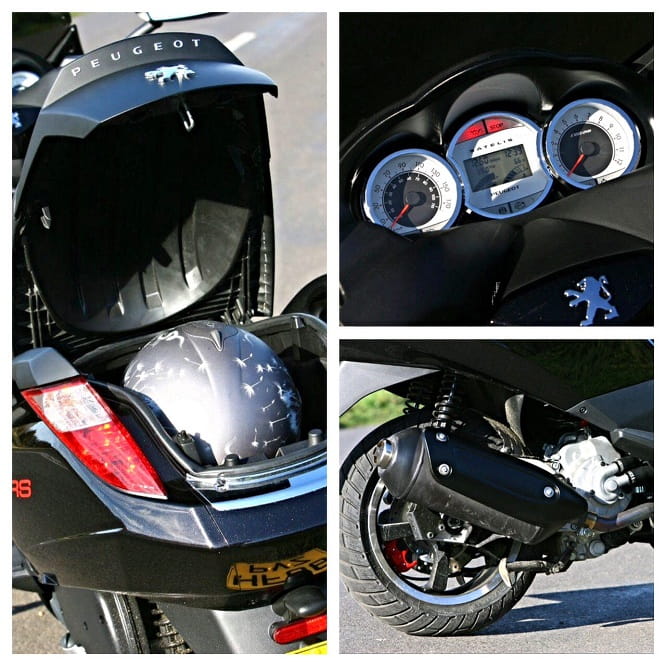