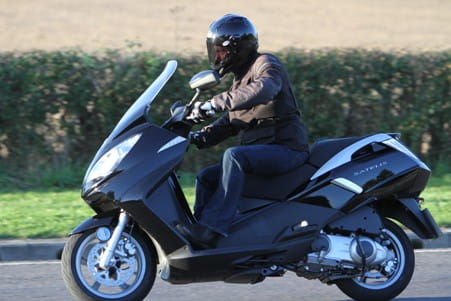 You can’t argue with the fact that the Peugeot Satelis looks slick and well finished. It’s an executive styled machine, designed to blend features from the French firms automotive side with their two-wheeled department and it pulls it off quite well.

Although the Peugeot Satelis itself isn’t new, this 278cc version is. Previously the Satelis has been around in 125, 250 and 500cc displacements, this one is powered by the same Piaggio derived engine as the Vespa GTS 300 (amongst others). There are no real surprises with the 21bhp motor, although it does actually feel livelier off the mark than the Vespa. Whether that’s a different engine map, slightly different gearing (thanks to the larger wheels) or just plain imagination I’m not sure but it certainly seemed quicker on acceleration to me. Top speed is exactly the same though at a GPS verified 82mph (although I did see 86 on one downhill stretch). The scooter will happily cruise at just over 70mph all day long though, as I found out on a 260 mile round trip to London. 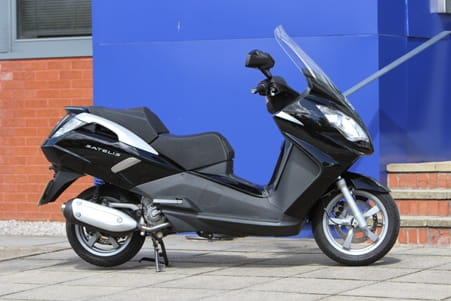 A modern mid capacity scooter like the Satelis is perfectly capable of covering distance on a regular basis, it’s also very comfortable for journey’s like that one. That’s thanks partly to the large dual seat, which is well padded and has a built in back support. Weather protection is good as well, although the screen is slightly shorter than I’d have liked but it does keep the wind and the worst of the rain at bay. The seating position is roomy enough and there’s enough legroom to allow you to stretch your legs out a bit. At motorway speeds the Satelis did 132 miles on less than 10 litres of fuel (the tank holds 13.2 so there was plenty left in the tank), the mpg worked out at 62 on that particular journey. You’re looking at closer to 80mpg around town though so it’s certainly not too thirsty.

Aside from long distance use the Peugeot is very handy to have around on a day-to-day basis. The scooter handles extremely well, the front forks are well damped and the twin adjustable rear shocks keep it planted so you can enjoy a bit of cornering fun. Its aforementioned nippy engine means the Peugeot can blast around the countryside as well as it can cruise, or win traffic light Grand Prix’s when required, it’s nimble through traffic as well. Surprisingly the Satelis doesn’t come with ABS but the brakes are fantastic, both front and rear really do take some beating. They offer plenty of stopping power with loads of feel at the levers. Peugeot really do build scooters with exceptionally good brakes. 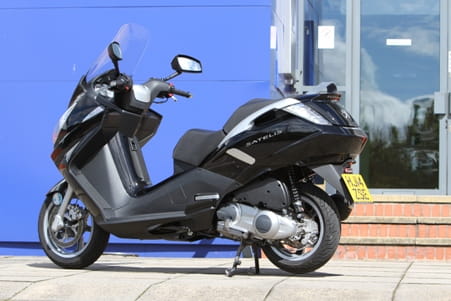 From an equipment point of view you get a set of crisp looking instruments with white facias and a crystal clear display for the digital screen. The scooter comes equipped with LED front running lights under each of the large and powerful 55w headlights. Inside the legshields is a fairly roomy lockable glovebox with 12v socket to charge a phone or run a sat nav. There’s also a hidden pop up compartment in the middle of the handlebars, handy for keeping change etc. Finally whilst we’re talking about storage there’s a decent sized boot, it pops open using the ignition key (turn the key too far when you’re starting the scooter and it pops open, which can be annoying). Rather than the whole seat lifting (as on most scooters) the rear part of the seat and boot lid open as one, it’s illuminated under there as well. Service intervals are 12 months or 10,000km and Peugeot offer a two-year warranty, expect a service to cost around £75.