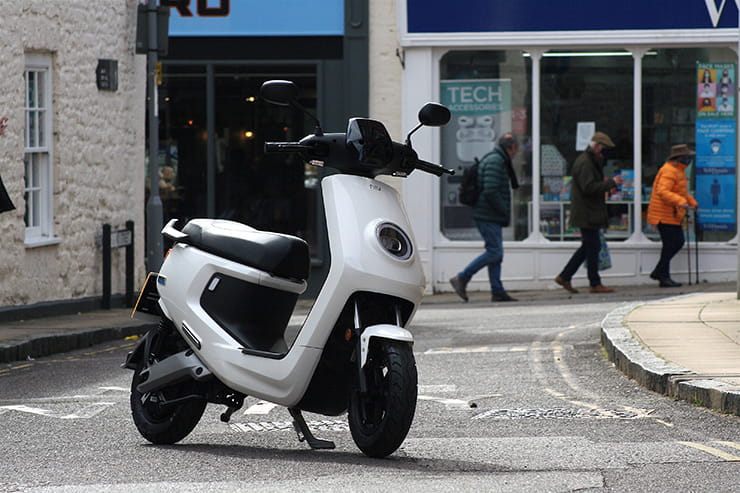 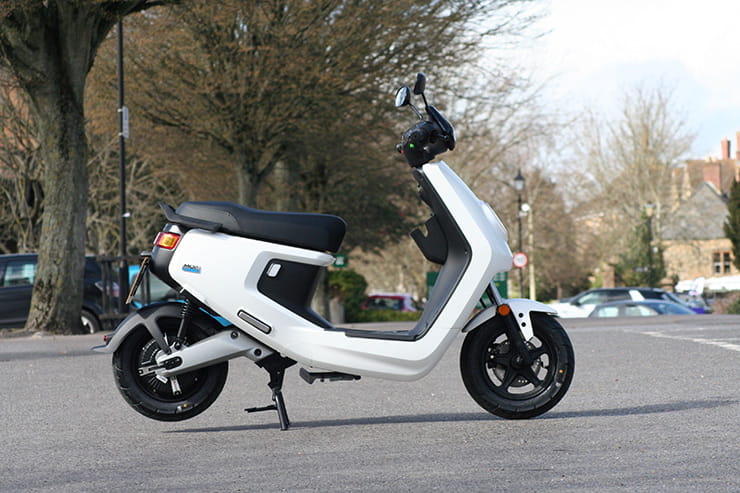 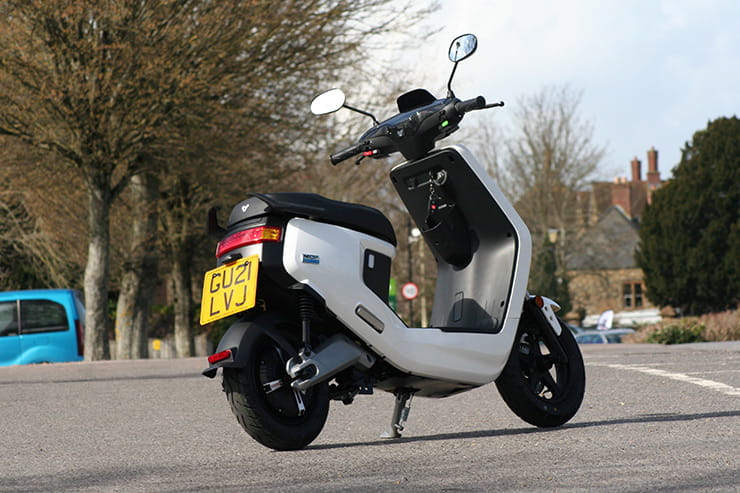 Sales of electric two-wheelers are rocketing, up by over 50% in the UK in 2020. They're still a drop in the ocean compared to petrol bike sales, with one exception – mopeds. In February 2021 battery-powered mopeds made up nearly one in three sales in the 50cc class, and they're still growing fast. That month, Britain's best-selling moped was...electric.

It's easy to see why. People buying a new moped are looking for cheap to run, fuss-free transport, and battery-powered mopeds tick those boxes even more thoroughly than the traditional 50cc jobs.

Niu is one of the front runners. Launched in the UK in 2018, it's since established itself as a well-priced and high-tech contender. It's currently the best-selling e-moped in Britain and by the end of 2020 Niu had sold over 1.5 million of them worldwide.

Not that it's without competition. Yadea and Lexmoto's e-mopeds are cheaper, starting at less than £1700, while Artisan (one of the UK pioneers) sells on its retro style at £2636. Vespa's Elettrica comes in at £5095, so you'd have to be a true fan to buy one of those. 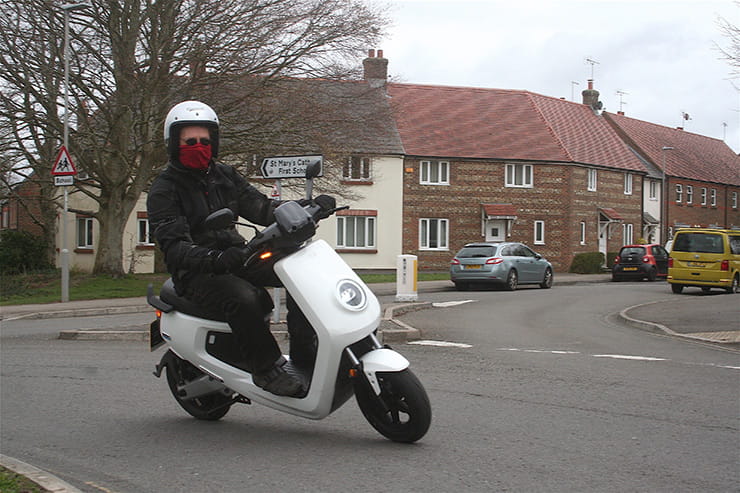 All these prices come after the application of the government's OLEV grant (also known as PiCG) which knocks 20% off the retail price up to a maximum of £1500. That makes the Niu MQi+ Sport tested £2156, which is pretty competitive. It's about midway up the Niu range, book-ended by the UQ (bare bones, little bodywork) and more substantial NQi - all are mopeds but the NQ and MQ are also available in faster 45mph form.

There are five colours to choose from too: white, grey (or silver), red, blue, and black with red detail. 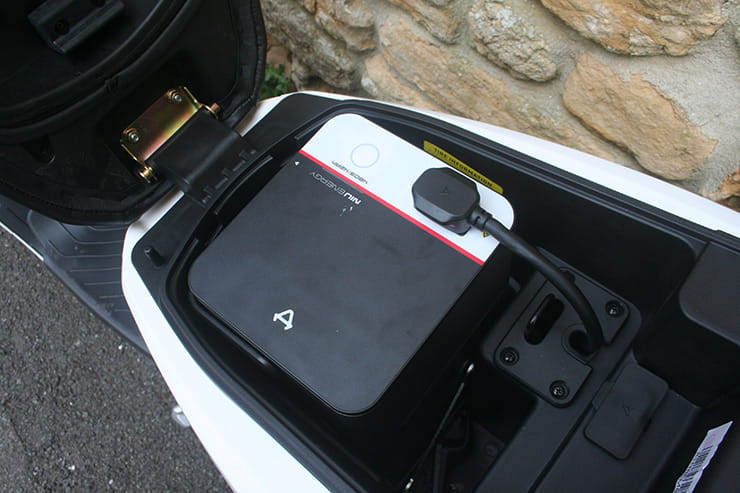 Now then, this is a moped, limited by law to 28mph, so there's not a huge amount to say about power and torque – by their nature, all mopeds produce about the same oomph for about the same performance. For the record, the Niu produces 1.4Kw (1.8bhp) which is about what you'd expect.

However, that doesn't mean that all these scooters ride in exactly the same way. The petrol 50s are famously slow to accelerate and feeble up hills but will sometimes creep well over 30mph. Electrics tend to be more disciplined, easier to limit on top speed but with more torque to get away from the lights.

So it is with the Niu. It gets off the line surprisingly quickly for a moped, and first time out I was fooled into thinking it was the 45mph version. Any illusions on that score were dashed when acceleration tailed off at 25-26mph, then creeping up to an indicated 29-30mph on the flat. It holds its speed reasonably well on modest hills but show it a steep gradient and the performance wilts. In theory, it should hold its own in all 30 limits, but on the open road the Niu feels vulnerable, though that's true of all restricted mopeds.

In town it's far more at home. There's enough acceleration to stay with most traffic away from the lights and being light and slim the Niu is very easy to filter.

The Bosch motor (not, I would hazard a guess, actually made in Germany) is mounted in the rear wheel, which makes for a nice simple set up with no need for any transmission. Electric motors are famously quiet, but this one is completely silent, and of course vibration-free. As for the battery, that's an industry standard lithium-ion job of 2kwh, which is about average for an e-moped. 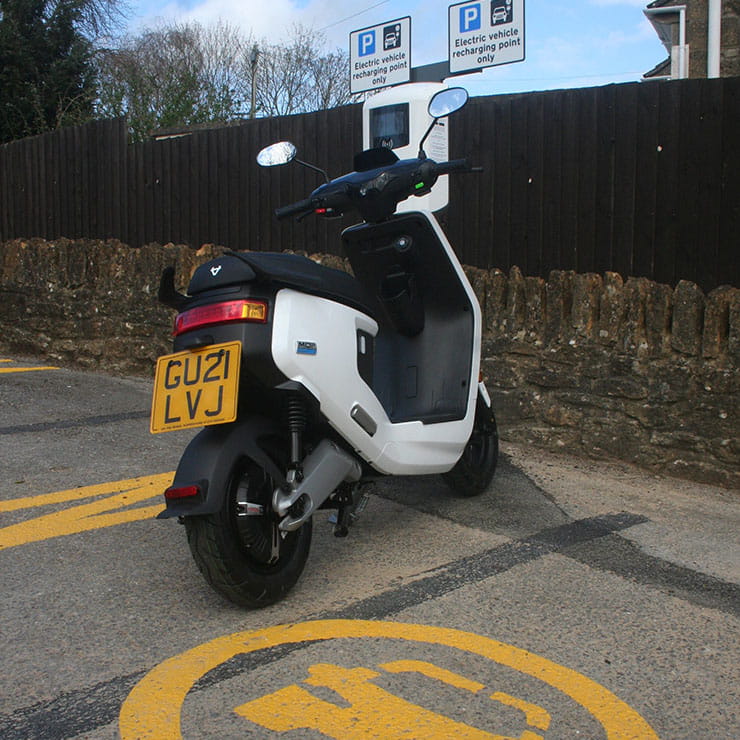 Niu claims a range of 50 miles at a steady 28mph, and this one had 7% battery left after 46 miles. That works out at 49 miles before flat battery time, so hats off to Niu for an honest claim. As with all e-mopeds, charging is via any domestic three-pin socket, which is convenient but slow – the battery took six hours to reach 100%.

Most electric mopeds now feature a lift-out battery, so it's possible to park on the street and carry the battery indoors for charging. On the Niu it fills the entire underseat space, though you could squeeze in a phone and a pair of lightweight gloves around it. The good news is removing the battery is dead easy, with just one plug and no spanners required. The battery weighs 11kg, about the same as a really hefty bag of shopping, so not the sort of weight you'd want to carry up several flights of stairs – doable if you don't live on the top floor.

Chassis-wise, this is a thoroughly conventional moped, so the plastic bodywork hides a tubular steel frame with non-adjustable forks at one end and pre-load adjustable twin shocks at the other. The wheels are tiddly 10-inch items, which is disappointing when more mopeds now have 12-inch wheels. The result is typical moped handling – you end up riding around potholes and manhole covers rather than over them, because the smaller wheels are quite easily upset.

On the plus side the CST tyres grip well, and the basic suspension also does a good job, even coping when there's a passenger on board. The short wheelbase and light weight (72kg) make the Niu very easy to scythe through traffic.

All new mopeds have linked brakes, and the Niu's work well. Hauling hard on the left-hand lever can make the rear tyre chirp, but they do their job of keeping everything balanced, and certainly have plenty of stopping power to cope with the modest performance. Squeeze either lever gently, and the regenerative braking kicks in, putting power back into the battery rather than using the 180mm discs. It's not perpetual motion, but every little helps. 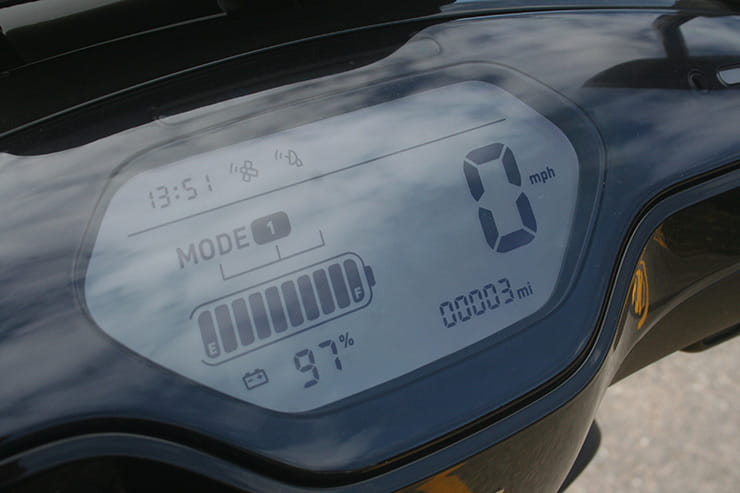 Comfort isn't high on moped priority lists, because by definition they get used for short journeys. They're also small, and six-footers will feel cramped on the little Niu, though at 5'6” I found it OK for commuting and even one 40-mile round trip (a bit of an epic for a moped) was also fine. I'm not sure the flyscreen does much to keep the wind off, but at 28mph it's not a big issue.

In theory (there are pillion pegs and a grab rail) the Niu will take a passenger. In practice, it did take my 5'2” standard pillion tester (with some clashing elbows and knees) and would still creep up to top speed.

Niu was one of the first scooters to feature an app which brings all sorts of useful features. Once you've got the app, your phone can give access to anti-theft/tampering alerts, the scooter's location, diagnostics, riding history, aftersales service...and so on.

Apart from that, it's all pretty standard stuff with the nice clear dash including a big speedo and battery level gauge, plus clock and warning lights. There are two riding modes, but Mode 1 (top speed, 12mph) is more suitable for Dutch cycle paths than anything else. Mode 2 (28mph) is the one to stick with. There's even a cruise control if your right hand gets tired of holding the twistgrip wide open for long periods. The indicators self-cancel, which I found they tended to do in the middle of tricky right turns, which wasn't good news. They also give a polite ding-dong soundtrack, loud enough for pedestrians to notice this otherwise silent two-wheeler. Apparently, this can be changed if it drives you ding dong into the bargain.

I was impressed with the Niu. It's a state-of-the-art electric scooter, with that handy app, the lift-out battery and is well priced into the bargain. If money really is tight, Lexmoto's electric moped is a few hundred pounds cheaper, but both of them will cost less than a 50cc petrol 'ped in the long run. Either way, sounds like a no-brainer. 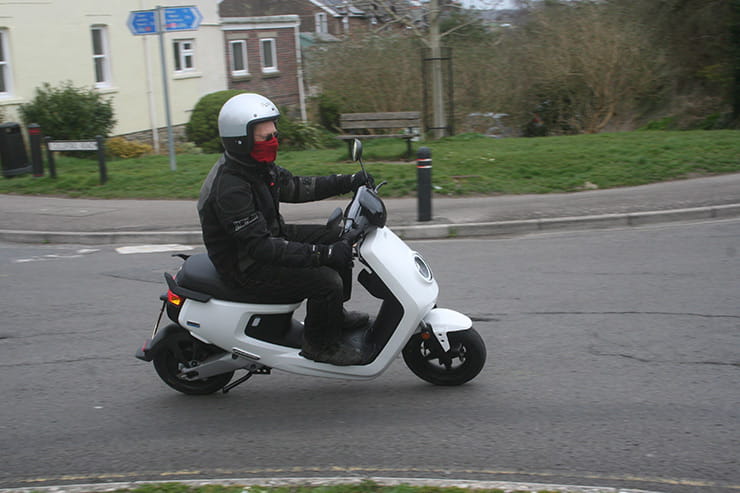 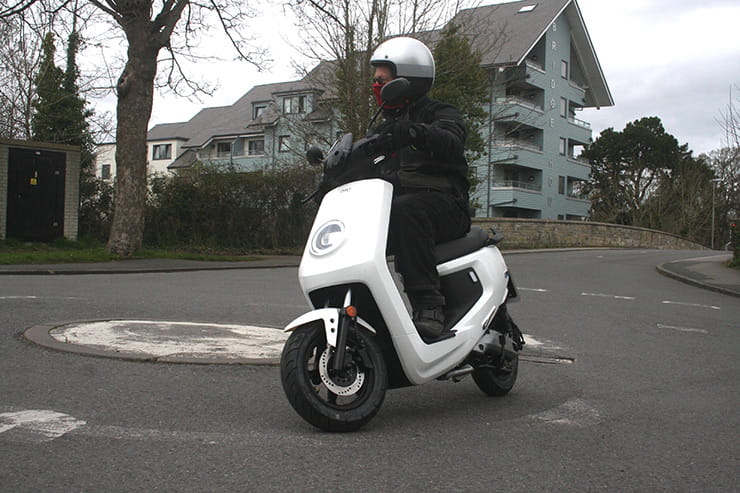