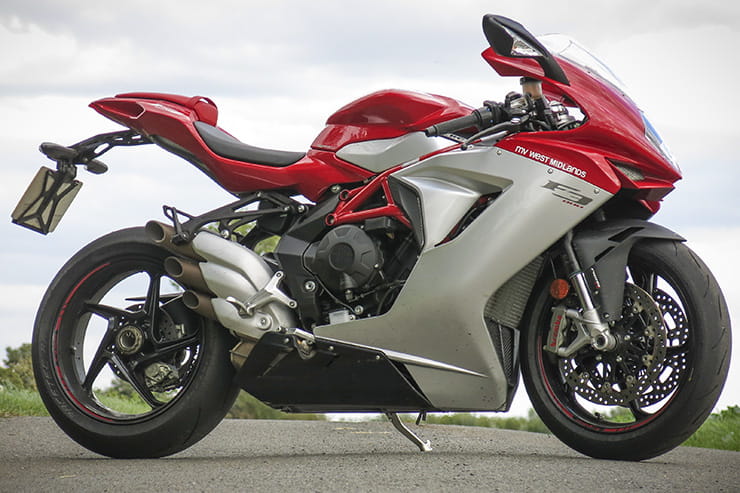 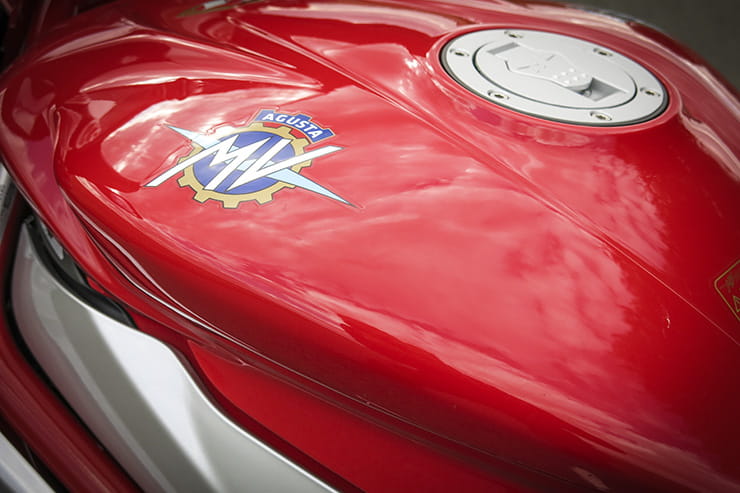 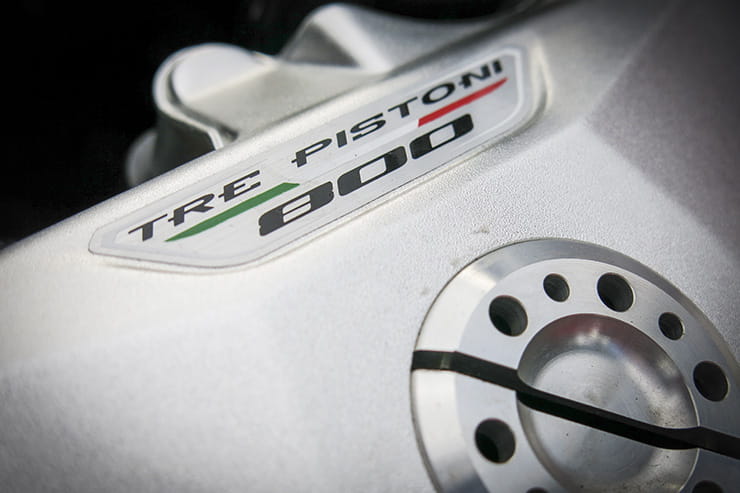 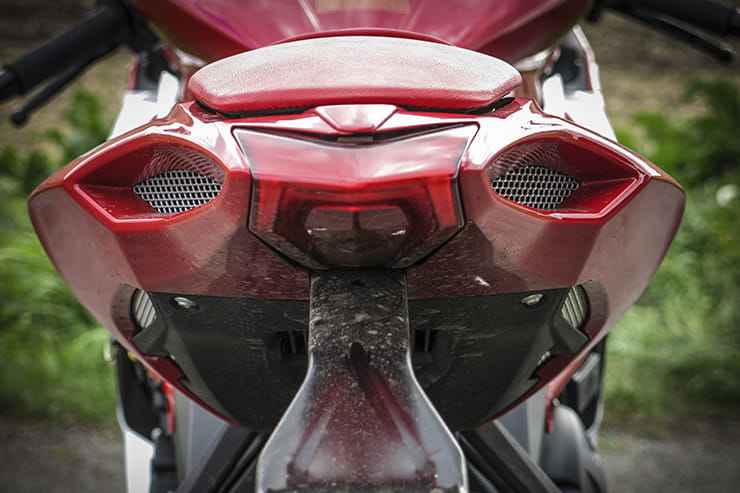 Since the F3 800 was launched in 2013, MV Agusta has seen its fair share of financial uncertainty, but one thing has stayed consistent – the Italian company hasn’t failed to build and sell what are arguably some of the most stunning motorcycles on the market.

This three-cylinder engined bike’s timeless design belies its age, and with some hi-spec features it’s an exclusive sports machine… but how does it perform?

Granted, there are plenty of much faster 1000cc sportsbikes out there, but I love the fact that you can work the MV without getting into seriously stupid speeds on the road. 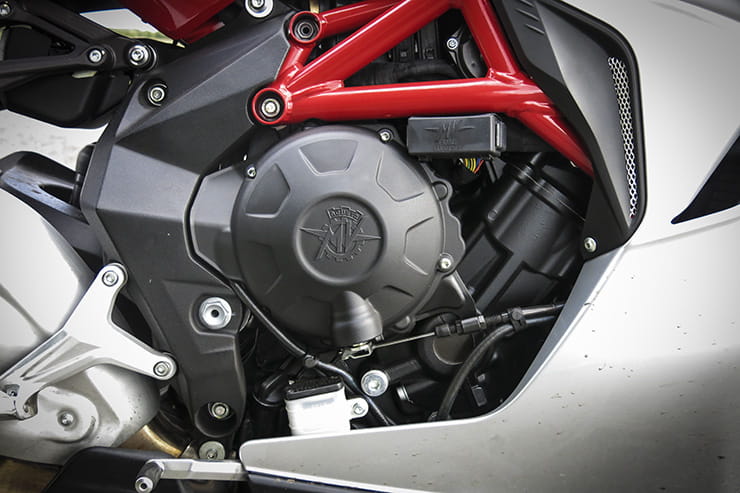 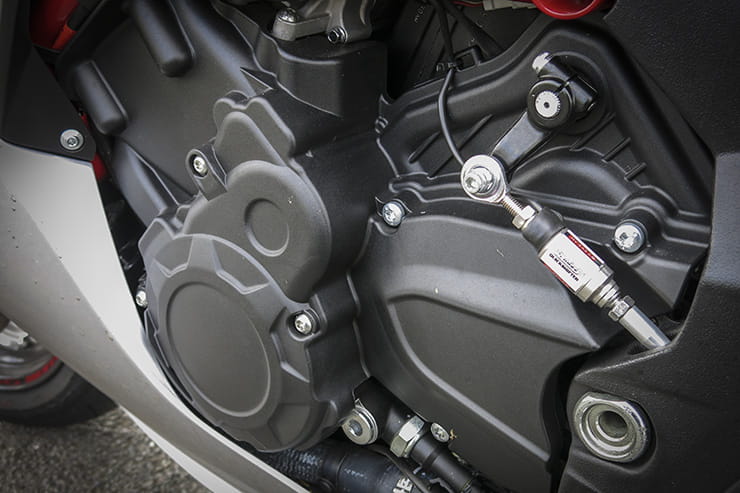 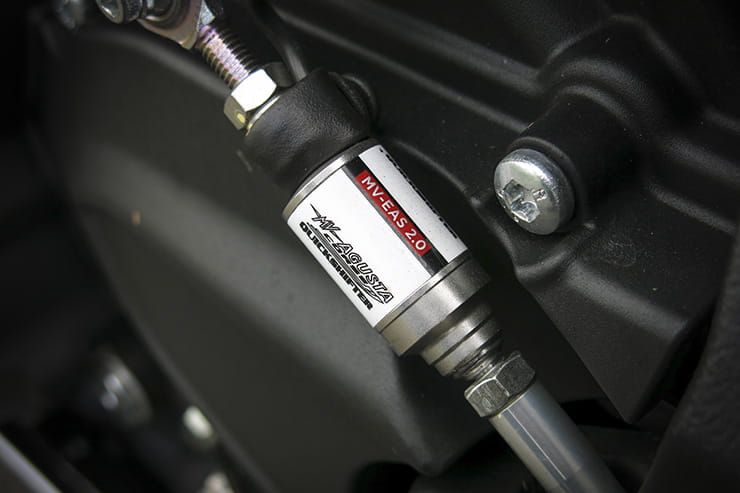 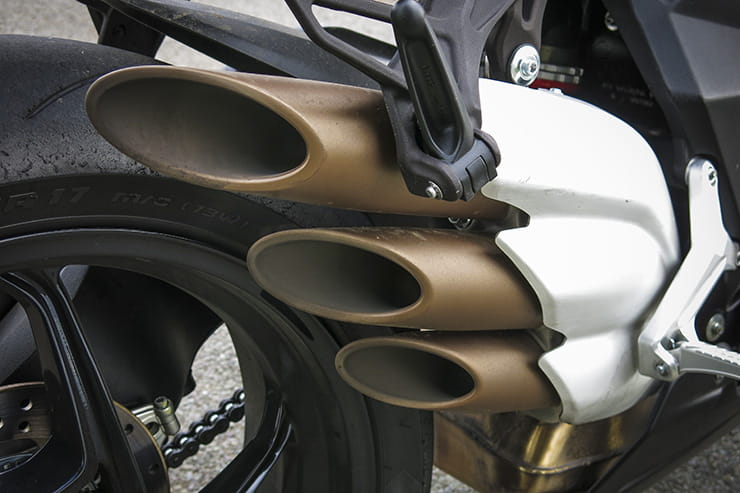 Basically the same as MV’s F3 675 motor, this 798cc unit has an increased stroke, with two injectors per cylinder, fed by 50mm throttle bodies. The induction is what gives the bike its great audio track, at least while riding it; at normal road speeds, those following might find the MV sounds a little asthmatic. Rattly even. At high speed though – for instance on track – it has a unique wail, made all the better by the slick up and down quick-shifter.

Jump off the MV onto a less well-equipped machine and you’ll instantly miss that shifter, which operates smoothly all the way up and down the ’box, with a satisfyingly short ‘blip’ as you press down for a lower cog. Only when lazily changing up from first to second do you occasionally catch neutral instead of second, but under load it’s intoxicatingly accurate.

The motor has a counter-rotating crankshaft – big news in MotoGP as by spinning in the opposite direction to the wheels it reduces the total gyroscopic force applied to the bike, so making it easier to turn. It’s also said to reduce wheelies, but given how eagerly the MV likes to lift under hard acceleration (with the traction control in level one), it’s clearly got a fight on its hands.

The gearbox is generally very positive, and no effort through town. While not the environment this racer’s designed for, MV Agusta West Midlands told me that most customers do tend to use them on the road as well as the track – one owner’s done almost 9,000miles in just over a year riding across the UK and Europe.

The engine’s great on the open road, but not so happy when things get congested – it’s quite hard to ride smoothly through dense traffic thanks to a light-feeling engine and fairly sharp throttle response (eased by using ‘Normal’ or ‘Rain’ modes, instead of ‘Sport’. There’s also a ‘Custom’ mode.)

On two occasions over about 600 miles, while off the throttle and with the clutch in, I did have the engine stall – once when coasting into the work’s car park, and once while sat at the lights. To be fair, the bike had only done 600miles when I got it on test, and it’d clearly had a very hard thrashing already – it’s due a service. 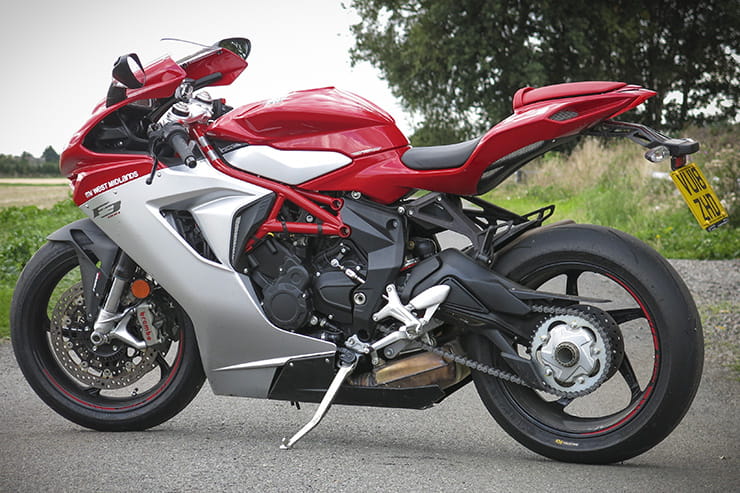 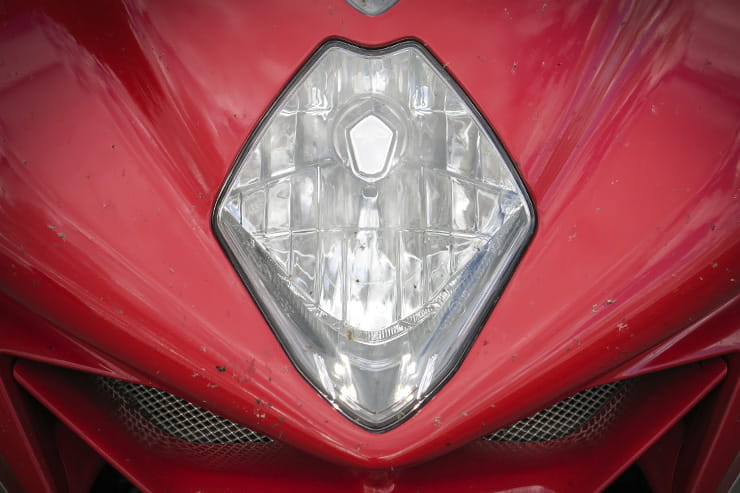 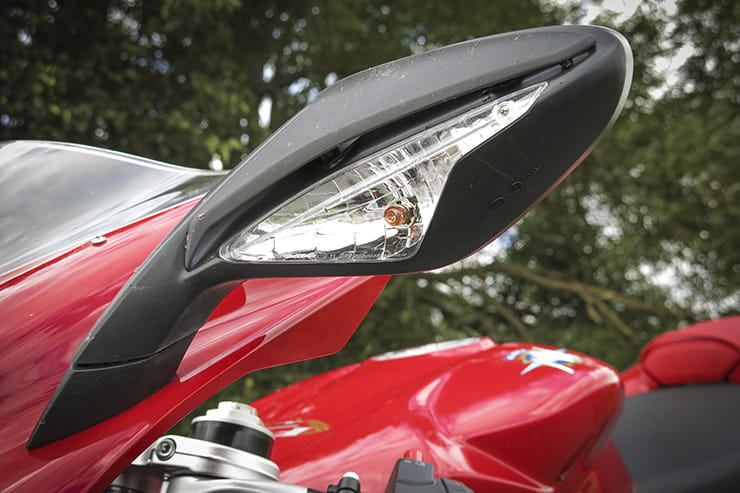 With normal spirited road riding and some dual carriageway, the fuel light came on at 116miles. There’s no gauge, and no economy measure, but once the reserve warning is lit, the dash counts up in tenths of miles. 14miles later I filled up, and 12.92litres meant I achieved 46mpg. At Oulton Park on a Bennetts Customer Rewards track day, 12litres of fuel took me 87miles – 33mpg. 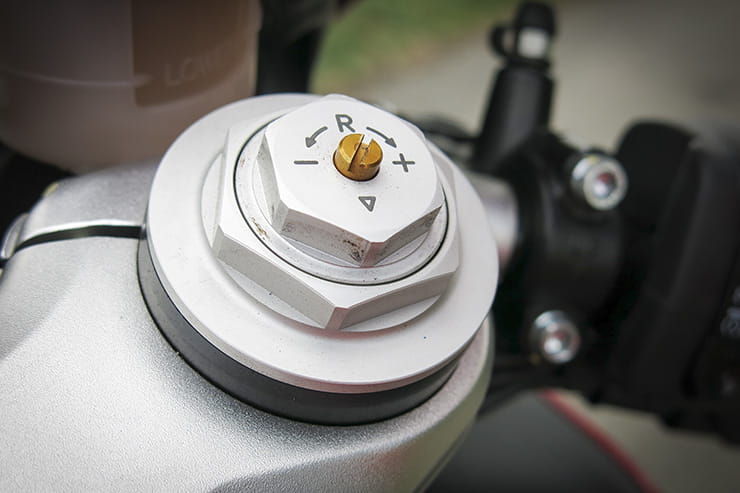 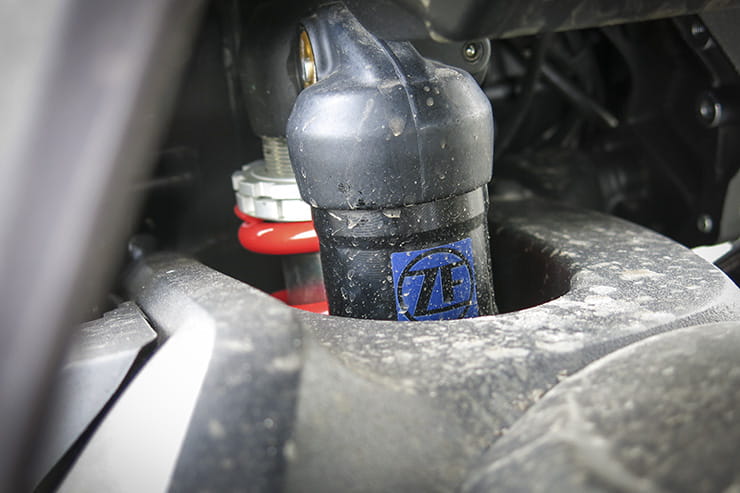 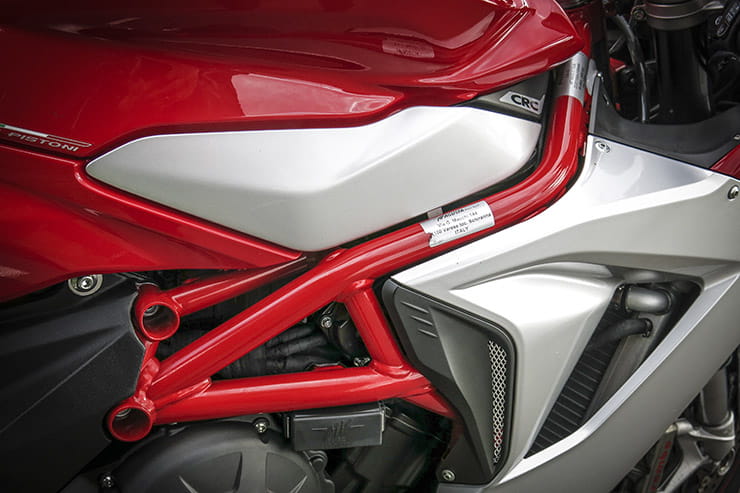 The steel trellis frame is as much a feature of the bike as the angularly sweeping bodywork. All in, it makes for a 173kg dry weight – about 190kg wet, and very similar to the Panigale 959.

The F3 is said to offer the handling of a 600 – the latest Yamaha R6 tips the scales at 190kg, and I’d have to say that, while I’m no racer, the MV certainly tips easily into road and track turns, and changes direction with little effort. As long as the suspension is set up correctly…

When I got the bike, I found it very firm for the road – to the point that I could barely see at high speed due to the vibration (even worse on the broken surface of Bruntingthorpe Proving Ground, where I tested the top speed).

The front Marzocchi fork had minimum preload, 2.25 turns of compression and two turns of rebound (of a maximum 3.5) when I got it. The rear Sachs shock had the preload ring approximately in the middle, with 2.5 turns of compression (max 3.5) and 2.5 turns of rebound (max 4.5). At 13stone, taking all the damping off (and leaving preload), the bike was a lot easier on the road as I took it to Oulton Park, but once on track it really didn’t want to tip in, especially on the banked hairpin of turn five – ‘Shell Oils’.

Whoever had set the suspension before me clearly knew what they were doing, as the previous settings proved perfect on the Chester circuit’s smooth tarmac. On the way home, I took one turn off each of the four damping settings, which gave a decent compromise for the road. 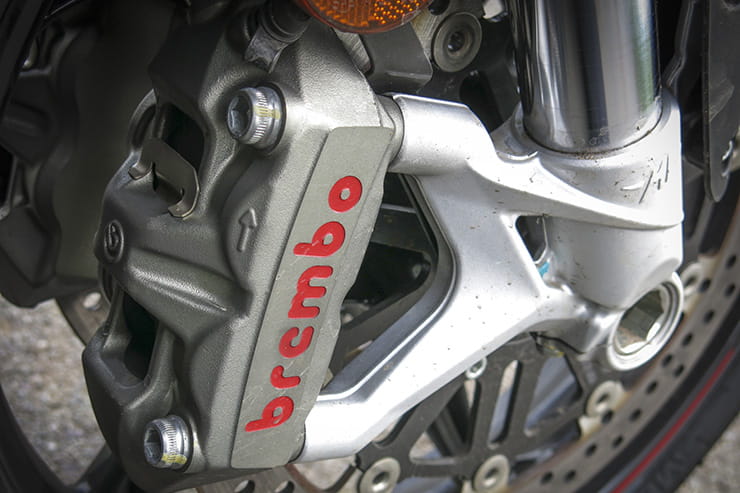 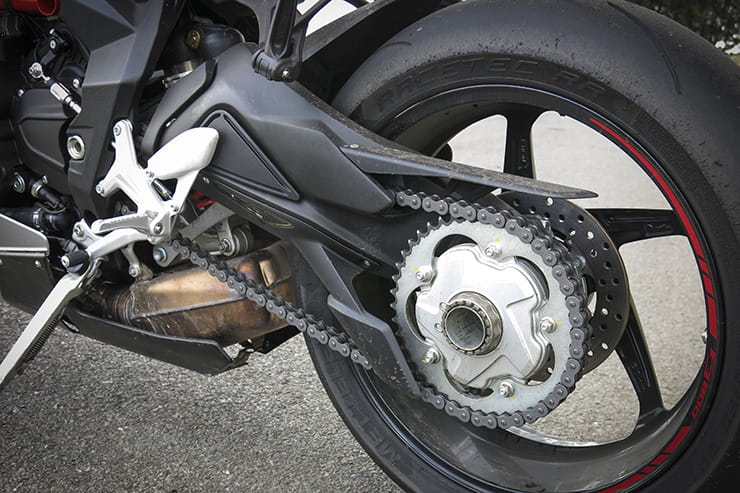 The front four-piston radial monobloc Brembo calipers and radial master cylinder are excellent – very strong, but not grabby. With the suspension on the firm side there’s little dive; just a precise and powerful action.

The same couldn’t be said for the rear on this bike: from the outset it was weak and spongy. I like to use the rear a lot in traffic to smooth my progress, but also as something of a comforter in faster turns. Closer inspection revealed that this system was leaking somewhere between the reservoir and master cylinder, so I’d expect the Brembo kit would likely be much more effective on another F3. 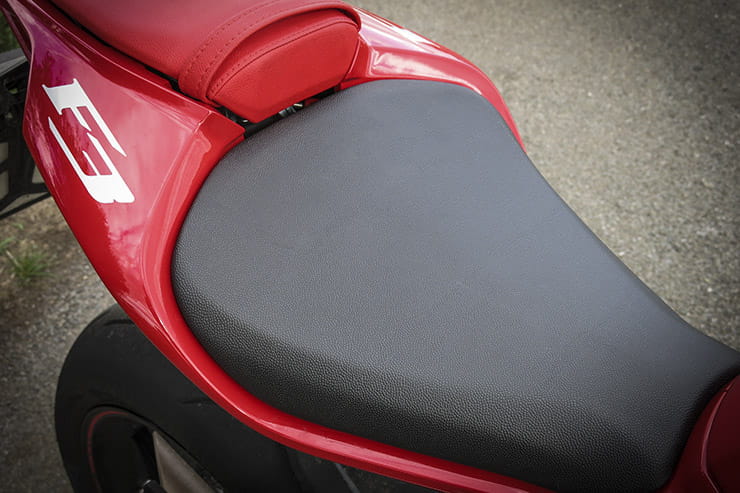 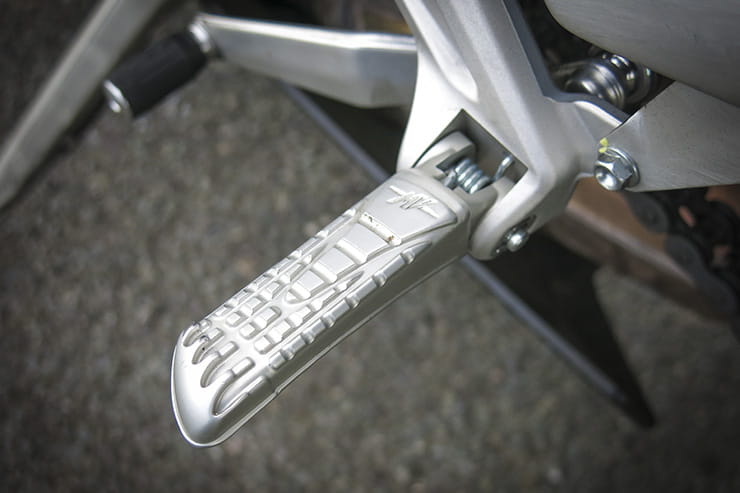 While the firm seat isn’t going to be ideal for touring, the F3 isn’t quite as hip-poppingly uncomfortable for my 5’10”, 46-year-old frame as some other super-sports machines. I’m the average age of buyers of this bike in the UK, and while the bar and peg position set you up well for control and moving around, it’s not a bad place to be for a long trip. Three hours in the saddle to Oulton was fine; only on the way home, after a full day on track and then fighting through rush-hour traffic did I feel tired and achy. 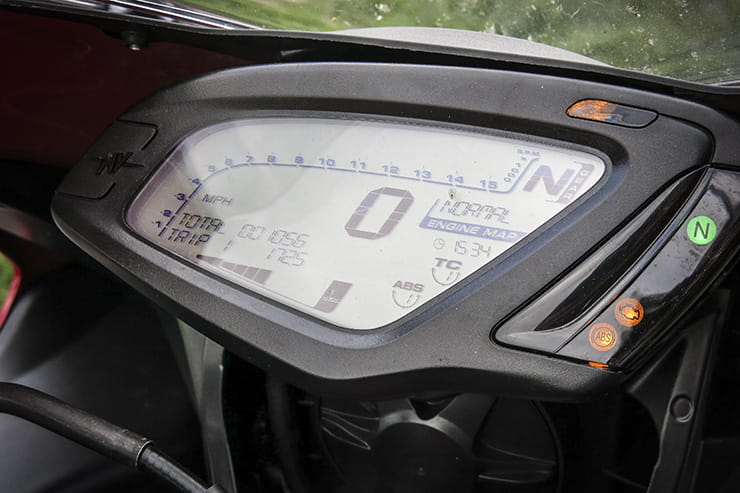 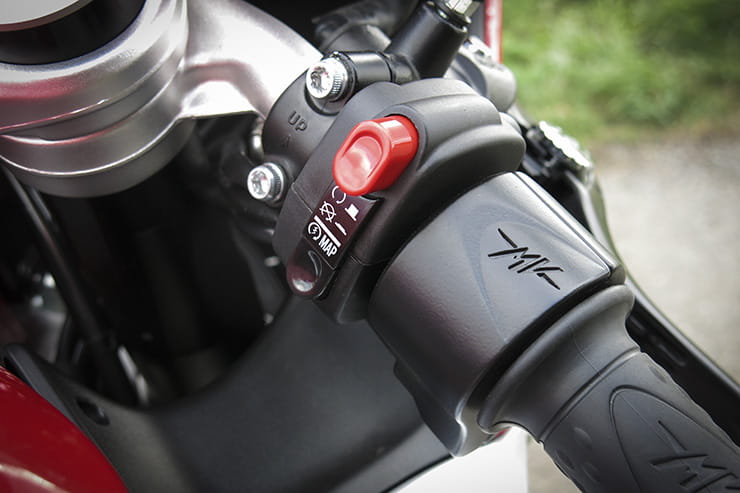 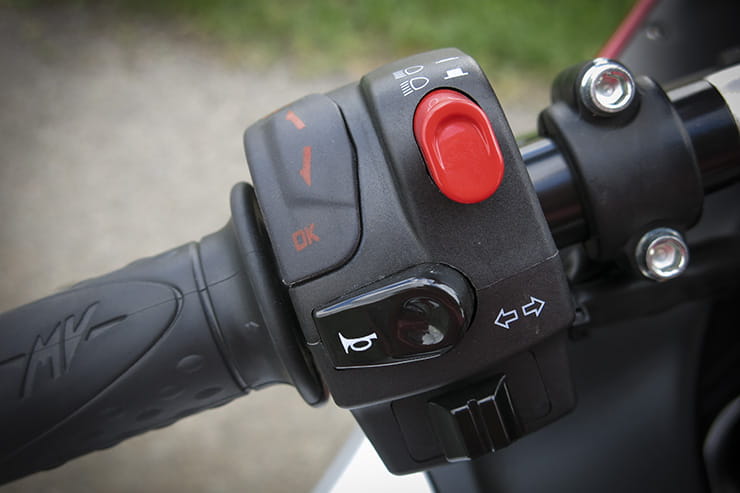 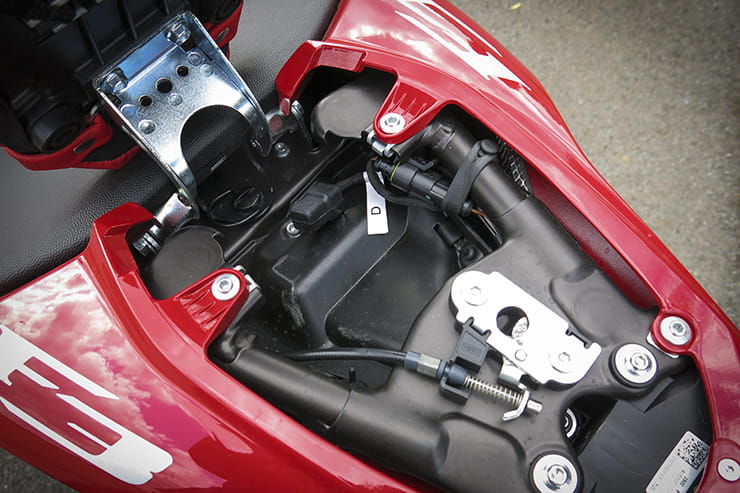 The up and down quick-shifter is the highlight of this machine’s kit, the three engine maps (plus custom), ABS (with anti-stoppie, but not cornering) and traction control are all very standard fare these days.

The LCD dash pales compared to the latest TFT full-colour systems, but I don’t mind it – if anything, I’d prefer a good old analogue dial.

The dash has a lap timer (not automatic of course), and cycling through the options is pretty simple using the rubber buttons on the left switchgear. Resetting the dual trips is a bit of a faff, requiring an overly long press on the down button. Also slightly irritating is changing engine modes – this requires a long press of the starter button (while the engine’s running) to access the menu, then a long press for each change – if the option you want is three presses away, it’s a bit of an awkward contortion of your throttle hand if you’re on the move.

The small pillion seat can be flipped up using the keyway below the tank – there’s not much room in there, but you could fit a small disc lock inside.

The Metzeler Racetek RR K3s gave huge confidence on the track (and snotted up well for bragging rights). Surprisingly, they were also fine in the wet, despite the small amount of tread.

In the dark, the headlight’s good by motorcycle standards – it won’t blow you away, and there are no LEDs, but the beam pattern’s fine for the few times it’s likely to be scrabbling around in the dark. 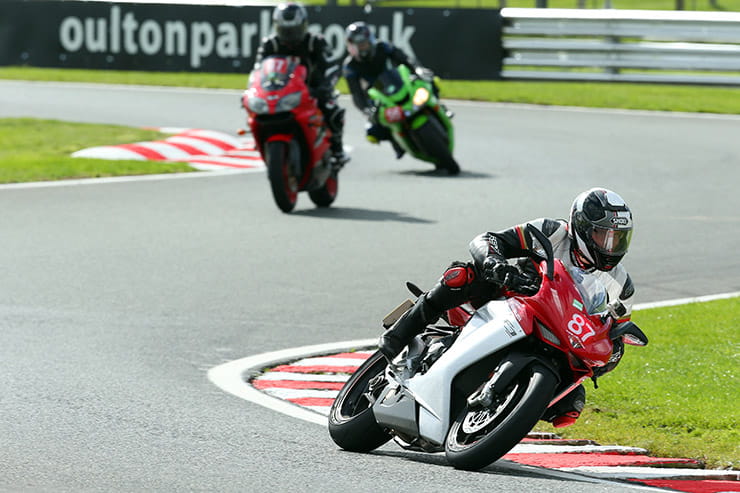 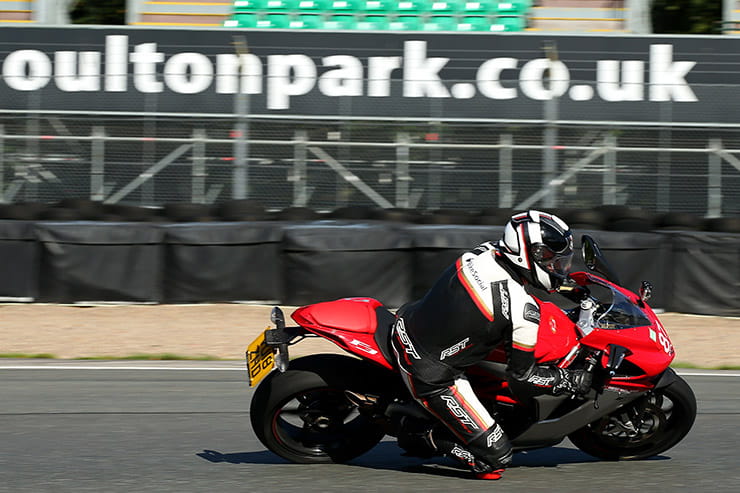 Some of the tech is showing its age a little on the MV, but the quick-shifter makes up for the lack of a fancy dash. The motor feels fantastic on open roads and of course track, and while the suspension’s very firm on the road, it doesn’t take much work to find a good balance.

With the MV comes a sense of exclusivity – there are higher performing motorcycles out there, but the F3 has a timeless design surely only rivalled by the likes of the iconic 916…

Three things I loved about the MV Agusta F3 800…

• Beautiful styling from nose to exhaust

• It’d have to be a second bike for me

• Firm ride on bumpy back roads