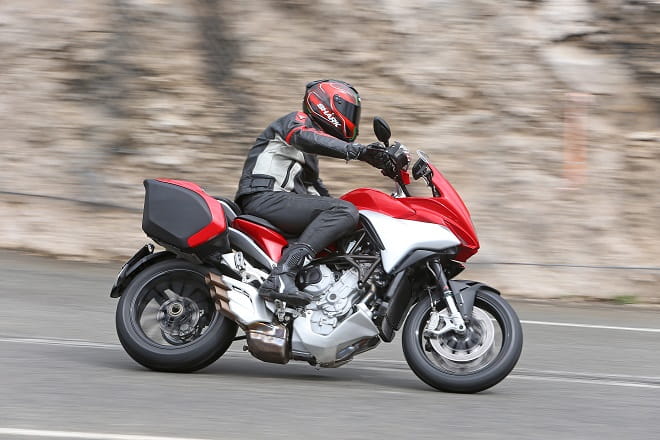 The Turismo Veloce is a landmark model for MV Agusta: the first of a family of sports-tourers that is intended to open up the Italian marque to a new breed of rider. But MV hasn’t gone soft. The bike’s name means “Fast Touring” and it’s distinctly different to other bikes of its type, partly because it’s based not on a large-capacity engine but on the firm’s 798cc triple.

It’s very different to MV’s traditional racy sports bikes and aggressive naked models, with a half-fairing and adjustable screen, upright riding position, reasonably broad seat and purpose-designed accessory panniers. The Turismo also has the lowest output yet from an MV triple, though its maximum of 110bhp at 10,000rpm is still competitive by middleweight standards, and the lower peak figure is balanced by a substantial increase in midrange grunt. 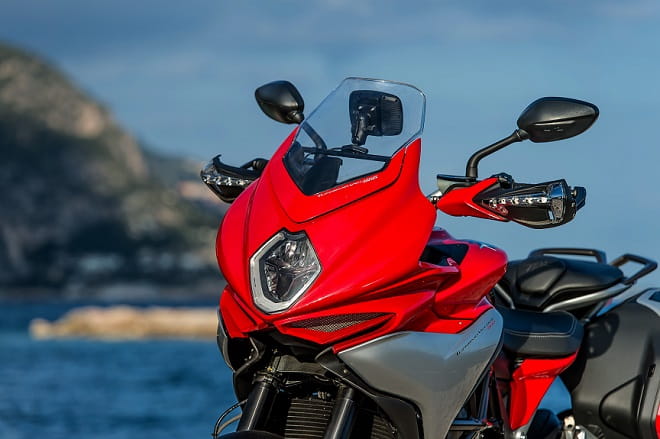 The stylish seat unit – based on a two-part aluminium rear subframe – contributes to the lean look of a bike that is compact and attractive. The rider’s section is reasonably wide and, at 850mm, high enough to give shorter riders a few problems with slow-speed manoeuvring, although the bike’s light weight (191kg dry) and generous steering lock help.

As usual with MV comes there’s a choice of four engine maps, three pre-set (Rain, Touring and Sport) and one customisable. For general riding I mostly used Touring, which was fine when the launch route headed out along the southern French coast near Nice. For town use Rain gave a slightly smoother response plus revised settings for the eight-way adjustable traction control system.

The MV had a slightly grumbly, harsh sound and feel at low revs but behaved well enough and was very responsive. For a middleweight it pulled mighty hard through the midrange, which helps make it very easy to ride, even in the sharper Sport mode with its quick response combined with a light throttle action. The Turismo stayed smooth at higher revs too, though it tended to hit the 11,500rpm redline and then the limiter if I didn’t make sure to click up promptly on the quick-shifter, which worked very well in both directions. 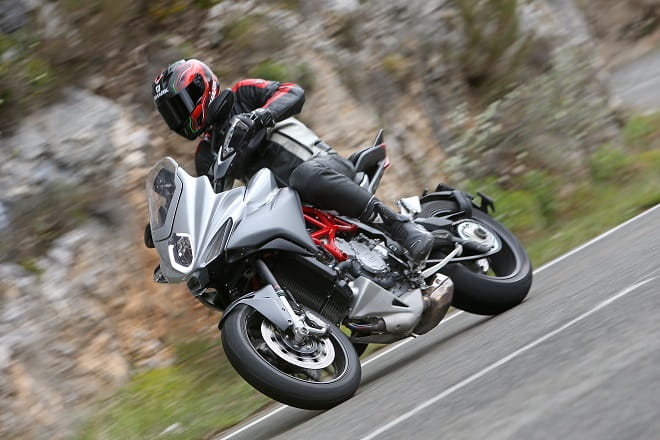 The Turismo was good at higher speeds too, heading for a top speed of about 140mph, although despite fiddling with the screen height (it’s one-hand adjustable through 60mm range) I couldn’t get rid of some noisy turbulence. The hand-guards also gave some protection although they’re set slightly too low to keep off all the cold air. The standard fitment cruise control will be handy on longer trips.

A wide one-piece handlebar, sporty geometry and the lack of weight combined to give excellent handling, with a superbly light steering feel. Ride quality was very good although the fairly soft, long-travel suspension (there’s 160mm of travel up front and 165mm in the rear) resulted in some pitching under hard acceleration and braking. And there was plenty of that, partly due to the powerful combination of Brembo monobloc calipers and Bosch ABS system.

Comfort was pretty good, not least from a seat that was sufficiently well padded that towards the end a fairly full day’s riding, with a stop for lunch, I was just starting to feel slightly twitchy. We’d averaged 45mpg despite a healthy pace, suggesting the commendably large 22-litre tank will give most owners a range of 200 miles or more. 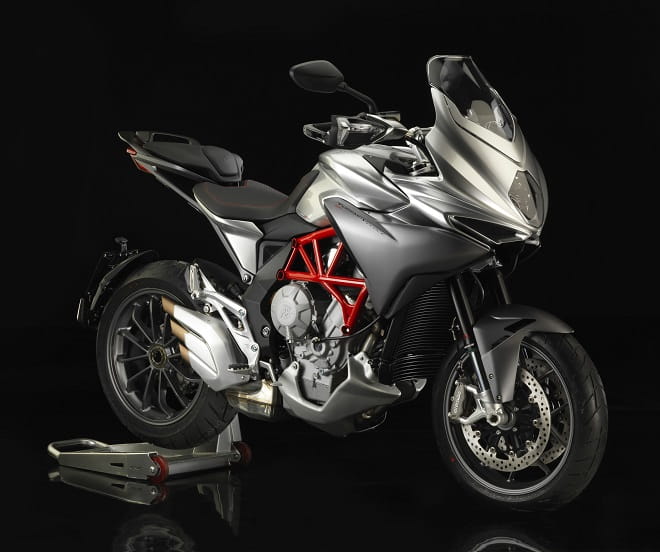 Other details are mostly good, including the LED lights and the TFT instrument panel, which is attractive and has plenty of info (including fuel consumption), although some of its figures are on the small side. Mirrors are reasonably wide and useable; the fairing has a couple of small compartments for coins or toll tickets; there’s built-in Bluetooth, plus two USB and two 12V power sockets.

The Turismo really lives up to its name when fitted with the panniers, which are easy to use and each hold a full-face helmet. They’re shaped to blend with a pillion’s legs and are nicely finished, although one of the cords that prevent the lids from opening too far snapped its plastic mount. The panniers don’t come as standard but are part of a £696 Touring Pack that also includes heated grips and a centre-stand.

At £12,199 on the road the Turismo Veloce is far from cheap but this is an MV Agusta that, as the firm’s President Giovanni Castiglioni says, is versatile enough to be “the first MV that people can buy as a first bike – normally an MV is a second bike, for your emotions.” It has the firm’s traditional style, image and performance, and adds serious amounts of comfort and practicality. Looks like MV Agusta’s new family just got off to a very healthy start. 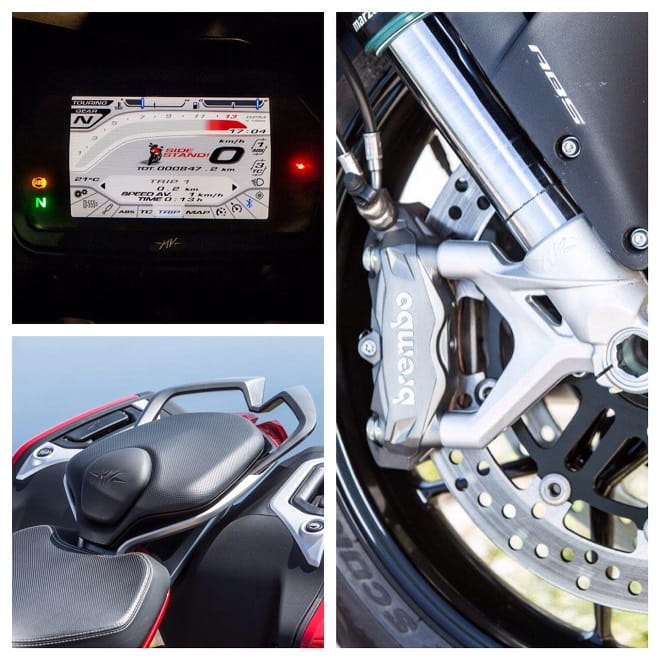 The Turismo is also available in a limited-edition version called the Edition 1, which includes the Touring Pack parts plus a satnav, and costs £12,889. Each of the 15 UK dealers gets just one bike from the global total of 150. The Lusso, due in June with heated grips, centre-stand and a GPS sensor as well as semi-active suspension, will cost £14,499 and should prove well worth the wait.