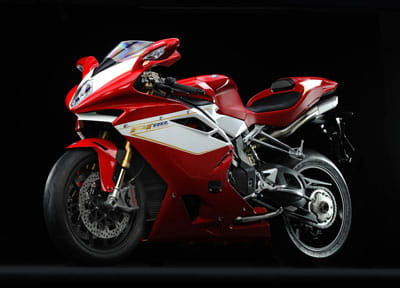 There’s no denying MV Agusta’s F4 is one helluva motorcycle on several levels. Firstly, it is one seriously powerful motorcycle even though the engine design is considered dated compared to the Japanese four-cylinder superbikes and BMW’s all-conquering S 1000 RR. But despite this, the short-stroke engine packs a top-end punch. A punch than can be heard as well as felt when engine timing and ancillaries such as electronically controlled variable length inlet tracts and exhaust valve come together to generate a raging engine and exhaust note. A pleasing sound, it has to be said.

Even so, the F4’s engine is mechanically coarse and can be felt through bars and pegs in a metallic maelstrom sort of way when compared to the likes of Honda et al. But, at the same time, it feels alive and can give the heart and smiling muscles a good work out.

The body also gets a good work out when making use of a stiff chassis and screaming engine. The F4’s chassis is stiff and top heavy despite the 52 per cent front end weight bias and gives the impression of having a wheelbase the length of two Fireblades. It’s hard work to cajole through a series of rapid change in direction twists and turns. But it is in long sweeping corners that the F4 comes up trumps because of its stability and all-telling feedback from the tyres being forced into tarmac. It’s the kind of feel that entices you to work the throttle harder when banked over, while at the same time hoping you’ve figured out how to set the traction control at the right level of interaction.

The next level of F4 appreciation is the overall look of the bike; there’s nothing else that looks like an F4 from the front, rear or side. It is rolling art, plain and simple. But while it looks single-minded, as in pure race replica, the F4 is actually quite roomy behind the bars and not uncomfortable unless over 6ft 2in tall.

Yes, the F4 is beautiful. It’s also quick and rewarding when ridden to the max, but getting it to that point requires physical and mental effort that, say, a BMW S 1000 RR or Yamaha R1 wouldn’t require for the same level of enjoyment. If you can afford to be different, then the MV is quite possibly the tool to have. But there are sharper alternatives to be bought for the same or less money.

+ points – looks a million Euros and is admired by many for being an MV.