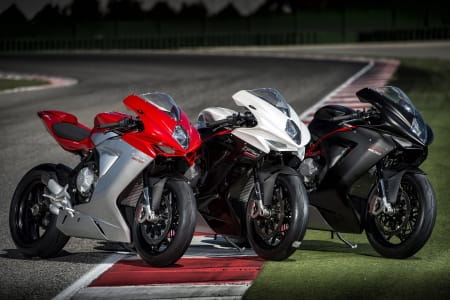 MV Agusta’s new F3 800 looks and feels so similar to the existing F3 675 that at a steady speed you could almost be riding the same bike. That impression is transformed the moment you crack open the throttle — and the new 798cc triple leaps forward with a ferocity that the smaller engined bike can’t approach.

It’s no wonder the 800 is a feisty performer. It combines essentially the same chassis and bodywork as the already rapid F3 675 with a motor whose peak output of 148bhp at 13,000rpm is 20bhp higher. Better still, the bigger engine’s advantage through the midrange reaches a remarkable 30bhp.

The enlarged three-cylinder motor’s extra power made the F3 a blast to ride on its launch at the Misano circuit. It despatched the straights at a rapid rate, wind rushing over the short screen, and the motor sending out an evocative three-pot wail from the trio of stubby silencers.

Happily there was no sign of the fuelling problems that have afflicted previous MVs including the F3 675. The 800’s throttle response in Sport, the most aggressive of the four modes, was immediate but well metred; Normal mode gave a softer response that would be better on the road. (There’s also Rain mode plus a Custom setting.) 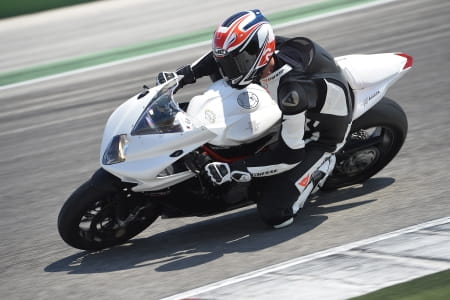 MV have also upgraded the eight-way adjustable traction control — and, as with the fuel maps, these improvements will be available to existing F3 owners via a free software upload. But the Italian firm’s engineers still have a little fine-tuning to do. The six-speed gearbox’s standard fitment quick-shifter was erratic at Misano, causing missed shifts on several of the bikes.

The F3 handled with the precision and agility you’d expect of a compact, light bike whose contra-rotating crankshaft is claimed to reduce steering momentum. Its chassis uses an identical steel-tube and aluminium frame to the 675’s, but the 800’s front brake is upgraded to Brembo’s Monobloc calipers, which slowed it with predictable force, aided by the new slipper clutch.

Suspension at both ends is stiffened to cope with the extra braking and acceleration force. The F3 got slightly frisky on a couple of occasions when I shifted my weight a bit clumsily while accelerating hard out of slower turns, but it recovered quickly and felt delightfully raw and racy.

The 800 was superb on the track and its advantages would arguably be even more apparent on the road, where the triple’s new-found midrange would be an asset. Inevitably the power increase comes with a hike in price, up to £11,499 from the quick-shift equipped F3 675’s £10,299. After one shot of its new-found midrange performance, I reckon most riders will decide the F3 800 is well worth the extra.