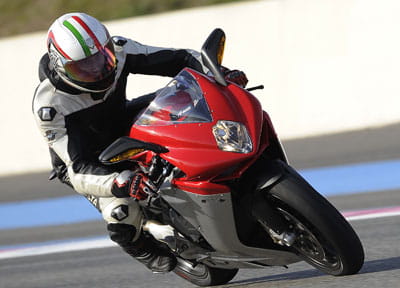 The F3 675 is a triple-cylinder powerhouse designed to take the middleweight supersport category by the scruff of the neck and shake old stagers like Honda’s CBR600RR and Yamaha R6 to the ground and wee on them. MotoGP-like counter-rotating crankshaft, traction control, super-swish electronics featuring four power/riding modes, and race-like performance and handling would make the F3 a top notch bike.

In reality, the first batches of F3 released in early 2012 were nothing more than underdeveloped bikes with problems. Yes, it was stunning in the flesh but the ride was blighted with chronic fuelling and ignition aggro and clutch/drive line woes. But credit to MV Agusta, the F3’s problems were quickly sorted.

Amends to the fuel mapping have shown the true potential of the F3. In effect it is a banzai bike that takes no prisoners. Ride it like a race bike and it performs in the same way. 1000% rider commitment results in a smile per tenth of a mile. But even at a slower pace the F3 will abide by your rules to be a tractable, go-anywhere-machine.

The problem is, because of taut, responsive and sharp steering chassis, anchor-like brakes and suspension set to the stiffer side of comfortable, the F3 feels underused. That slight lag in response to small throttle openings reminds you it just wants to be given its head and run riot, which it does perfectly to also remind you this bike was developed on the track for the track. 173kg dry weight isn’t to be sniffed at.

The F3 is built in the same vein as Yamaha’s R6; it’s a genuine race replica. Accept that the F3 isn’t going to adapt to six-feet tall riders, isn’t going to be comfortable on the bum after 200 miles and isn’t best suited to tank bags or sling overs being draped across it, and the F3 will be just fine.

The only other problem for MV Agusta is the F3 has been pitched into a diminishing genre. Supersport sales have dropped sharply and the reason why Honda et al have performed small updates on existing models. It appears the F3, complete with explosive performance; race-like handling, and traction control has come with too much too late. It’s a shame because it is a good tool.

+ points – looks and top end speed. And the fact it’s an MV Agusta

- points – expensive when compared to the Japanese and Triumph bikes that do the same job.