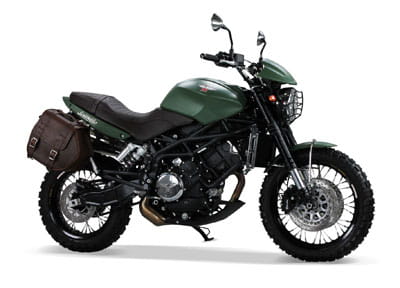 Moto Morini is an Italian motorcycle producer that, despite financial and supply problems during its 75-year history, refuses to give up and disappear. It now supplies its reduced range to customers direct from its Italian factory or via its website. This allows Morini to personalise its bikes with a wide-range of colours and component changes to suit the buyer. Servicing is carried out through authorised service centres in each European country.

A big seller for Morini is the Scrambler 1200, a machine styled to replicate scrambler bikes of the late 60s/early70s in the same vein as Triumph’s Bonneville Scrambler. The biggest difference is the Morini Scrambler is endowed with a monstrous 1187cc, 87° V-twin.

It’s an engine that you can’t help but love because of its ability to literally pull like a train from the off with a pleasant mix of torque and power – not masses of each but packaged to be usable. Put it like this, even with the standard dual purpose tyres it makes for a lovely road bike with the ability to take to fields and fire racks very easily. It has six gear ratios but the engine is so tractable you could get away with leaving it in top gear most of the day.

The Magneti Marelli fuel injection is precise and flexible without any hiccups. And for 2013, Morini has reduced the clutch lever pressure with the use of an assisted clutch that doubles up as a slipper clutch – useful in itself when those two large pistons give the sort of engine braking that used to cause the rear wheel to hop under throttle shut off.

Aesthetically, the Scrambler is a joy to behold with its perfect blend of Scrambler looks and modern chassis and running gear – we love the wide wire-spoked wheels. There’s also a further 17 bodywork colour schemes available to buy on top of the standard issue ‘forces green’. There are optional frame and engine colours as well.

Morini’s Scrambler is a pleasure to ride, too. The new lightweight bars and peg position gives an upright and almost natural seating stance. The ride quality is pleasing: not too stiff; not to soft – just nice! The engine is mounted quite high up in the frame and the Scrambler needs a little extra effort to steer into the turns. But apart from that, it is genuinely a great roadster.

- points – demo rides are few and far between. No UK-based dealership to walk into to see what you’re buying. Transportation and registration costs to be considered.