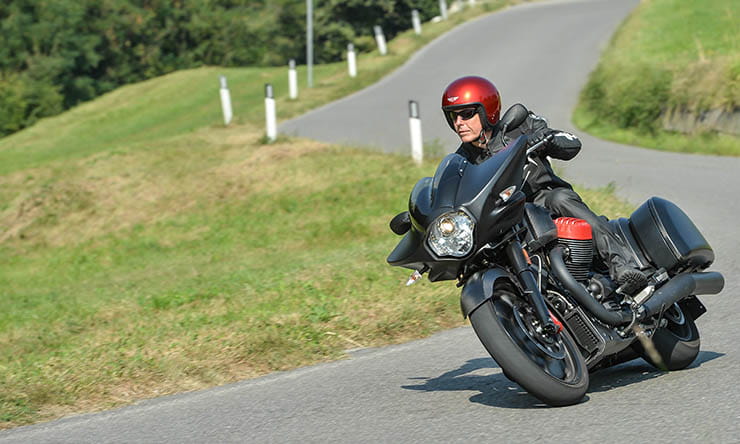 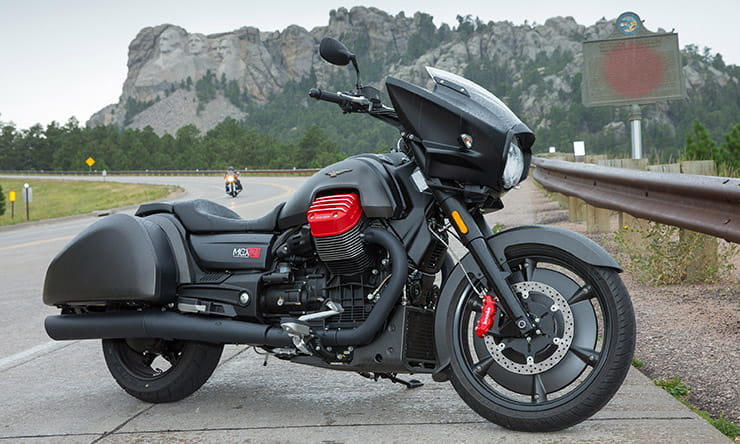 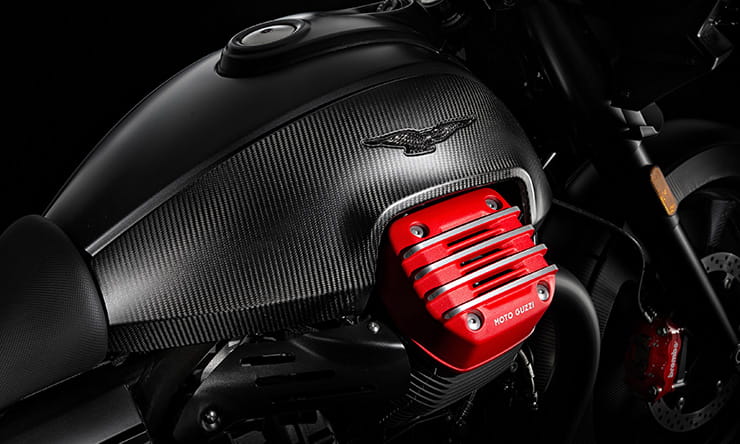 In many ways the MGX-21 Flying Fortress could hardly be more American. It’s a big V-twin bagger that was designed in California, is named after Boeing’s B-17 bomber from WWII, and was launched to the US press last month at the world’s biggest bike meeting at Sturgis, South Dakota.

But those big, red-headed cylinders are sticking out sideways because the MG of MGX-21 stands for Moto Guzzi, Italy’s oldest and most traditional motorcycle firm. The Flying Fortress was shaped at Piaggio’s design studio in Pasadena by the firm’s head of design, Miguel Galluzzi, in an attempt to boost Guzzi’s attack on the US market, where most of the world’s big V-twins are sold.

This is the fifth of Guzzi’s new-generation family of 1380cc V-twins, following the two California models, and last year’s Audace and Eldorado. It’s the most aggressively styled, combining a batwing style handlebar fairing, plenty of carbon-fibre, and a 21-inch diameter front wheel that is reflected in the MGX-21 name.

It’s a striking bike, closely based on the prototype that was unveiled to rave reviews at the Milan Show almost two years ago. Carbon is used for the tank and pannier covers, the front mudguard and belly-pan, as well as the centre of that big front wheel. The sharp-edged fairing holds an LED front light. Splashes or red on the Brembo front brake calipers and cylinder heads add contrast to a bike that is otherwise almost completely black.

Despite those “Testa rossa” heads, the 90-degree V-twin lump has the same level of tune as the other California-based models, so kicks out a maximum of  96bhp at 6500rpm. It also follows the others in having three riding modes, labelled Veloce, Turismo and Pioggia (Fast, Touring and Rain) and a three-way adjustable traction control system.

The California’s method of rubber-mounting the motor is also retained but the chassis is beefed up, with the tubular steel frame being strengthened for increased rigidity with thicker front tubes and a reinforced rear section. Up front, the 45mm forks are kicked out at a lazy 32 degrees. Behind the panniers are twin shocks with remotely adjustable preload and a reasonably generous 120mm of travel.

Lined up outside a Milanese hotel for its European debut, the Flying Fortress looks like no other Guzzi. But in a straight line it feels much like the other California models. The bars are wide and pulled back. The transverse V-twin motor comes to life with that age-old rock to the right as you blip the throttle, jiggles around in the frame at idle, and chuffs in familiar fashion through the black-finished pipes.

That abundance of low-rev torque sent the MGX pulling forward effortlessly when I let out its light-action clutch, the sweet ride-by-wire throttle response helping make it responsive but not remotely snatchy, even in the slightly sharper Veloce mode. The softly tuned V-twin generates a hefty maximum of 89ft.lb of torque at just 3000rpm, which contributes to its laid-back character.

The Fortress can get a move on when required, although for maximum acceleration I had to use the revs but make sure to change up before the rev-limiter cut in at around 7000rpm. The twin, circular clocks are stylish but I found them slightly hard to read, especially in bright sunlight. Generally it was best to short-shift through the fairly sweet six-speed box and enjoy the bike’s ability to sit smoothly at 80mph in typically long-legged Guzzi fashion. 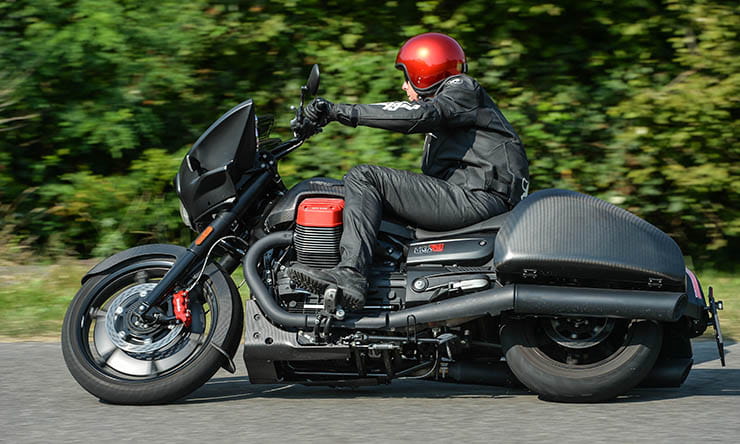 The MGX should also live up to its heritage by being able to cover serious distance, despite its ultra-fashionable look. The tank’s fairly generous 20.5-litre capacity should give most riders a range of getting on for 200 miles. I found the stepped seat fairly comfortable too, though the pillion doesn’t get as much room. The panniers are useful large and easy to open, and come with inner bags, though they aren’t big enough for a crash helmet.

On the launch route from Milan to Guzzi’s Mandello base and back, the Fortress chassis’ performance was mixed. That big, carbon-covered front wheel is seriously heavy (Guzzi wouldn’t say how much heavier than the other Cali models’ smaller wheels it is), and tends to make the bars flop into slow turns. So the firm has developed a special steering damper that it calls a “manoeuvring assistance system”, which gives increased resistance as the bars approach full lock.

This presumably helps, but it can’t prevent the MGX feeling distinctly unwieldy at low speeds, even by the standards of other big cruisers. Several shorter riders, in particular, found the bike hard work in traffic, and struggled with tight turns. At least the seat is pretty low, at 740mm, so allows most riders to get both feet down at the lights.

At higher speeds the handling was much better. In medium speed turns the Guzzi handled very well for a shaft-drive cruiser that weighs over 340kg without fuel. It seemed to shed most of that weight on the move, and was reasonably easy to aim into bends with a nudge of the wide handlebars.

Presumably the stiffer frame contributed to the bike’s stability, and its suspension also worked well, combining a fairly plush ride with sufficient damping for reasonably enthusiastic cornering. Ground clearance was good by cruiser standards, as you’d expect of a Guzzi, and the Dunlop Elite tyres were well up to the job. So too were the brakes, with those radial four-pot front Brembo calipers biting hard, and the single rear disc adding some useful force at times, along with a well sorted ABS system.

The twisty launch route meant I didn’t have much need of the MGX’s standard fitment cruise control. I was still grateful for the protection from the fairing, which protects hands well. But at much above town speeds its screen generated enough wind turbulence to drown out the standard fitment sound system – a bagger essential – despite its 50W per channel output.

The Fortress’s sound system was clever enough to pair easily with my phone’s Bluetooth, and incorporates Guzzi’s Media Platform which allows a smartphone app to display and record various aspects of the ride. There’s also a handy USB socket below the instruments, although you’ll need an accessory to hold a phone because the bike has nowhere to store it.

At £17,336 the MGX is expensive even as standard, and many riders would find Guzzi’s identically powered Audace, which is over £2000 less expensive, easier to get on with. But the Flying Fortress has the fairing, the sound system, the bags, and most of all the radical, carbon-clad look. And with only ten units being imported this year, through just four dealers (in Chichester, Croydon, Peterborough and Sheffield), it also has exclusivity on its side. 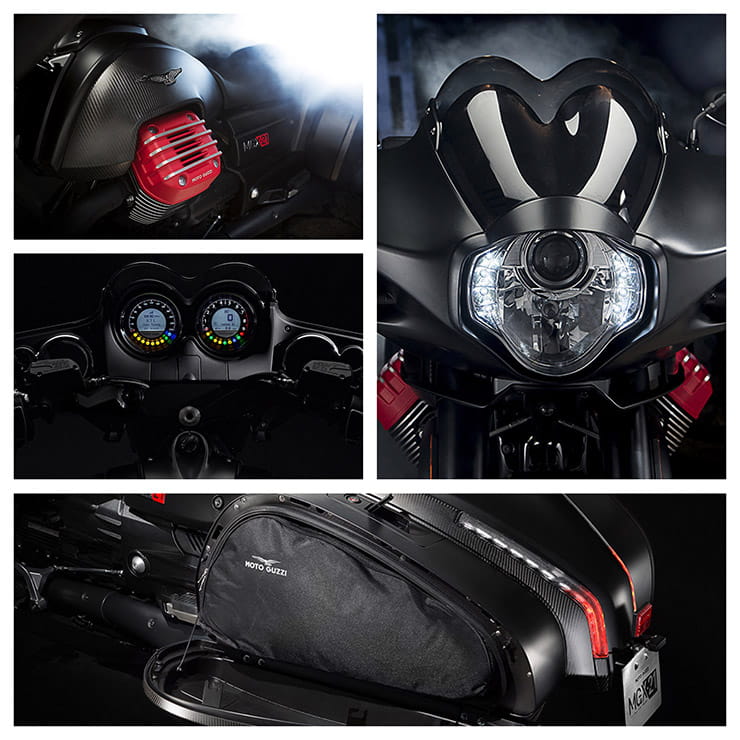