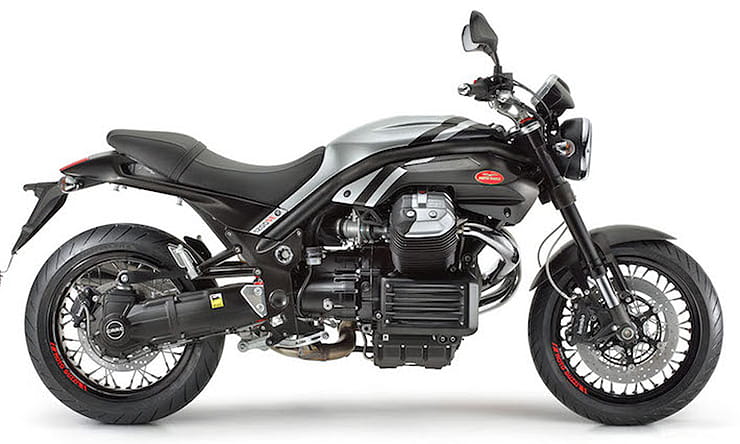 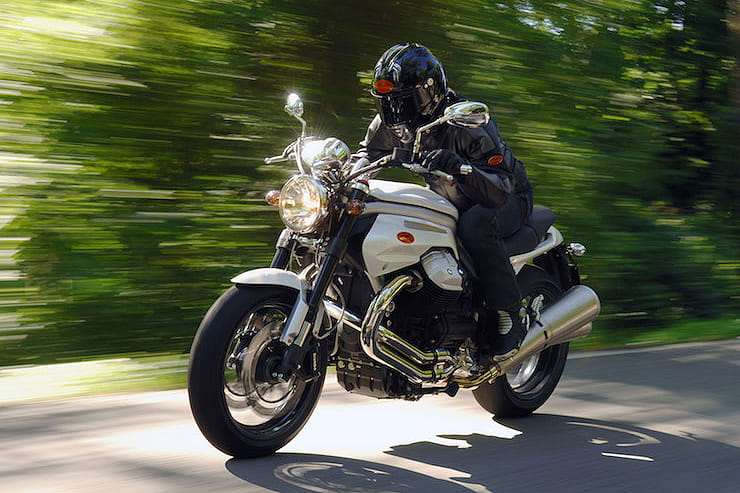 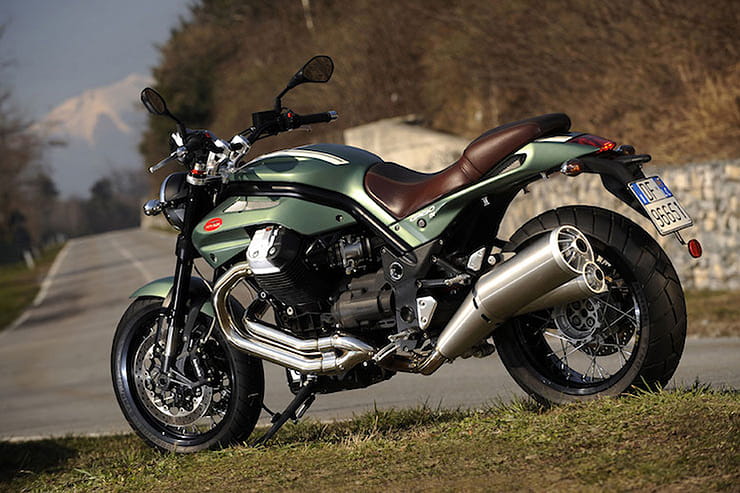 The Griso is a classic, ‘old school’ Moto Guzzi roadster. Developed mostly under the firm’s Aprilia ownership and shown as early as 2003 at EICMA, it was finally launched under Piaggio ownership in 2005. Initially an 1100cc, 2v design, it’s classic Guzzi: a big, air-cooled trademark Guzzi transverse V-twin that’s all about grunt and character, but in a new, modern roadster chassis with plenty of charisma and class. Those first bikes were fruity, classy and, although something of a handful, entertaining. But far better is the second-generation 8v, with an enlarged, far more powerful version of the V-twin plus radial brakes and a host of other updates. While the final SE, with more retro styling and quality design touches, not to mention some engineering glitches ironed out, is probably the best of the bunch. If you want a more exclusive, laid back, bristly and heavyweight Italian V-twin roadster and can live with all the quirks a Guzzi has to offer, it’s worth a look.

The Griso was always conceived and eventually introduced as a luxurious, sporty roadster with the spec to match, and that has always been reflected in its price. When new, this was a quality, mature Italian piece of gentlemanly exotica – better equipped than the more basic Ducati Monsters but not as lithe, lightweight and potent, either. Accordingly the first 1100s were over £7000 new and the later, better 8v and SE versions even more. As used buy, however, particularly as the earliest versions are now over 15 years old, it offers the prospect or a stylish, well-equipped, distinctive and fairly exclusive machine for well under £5000, which can be tempting, especially as, considering the nature of the bike, mileages tend to be low. We’ve seen decent, looked after examples for as little as £4000 with plenty of life left while even the top spec SE versions rarely are offered for over £6K. 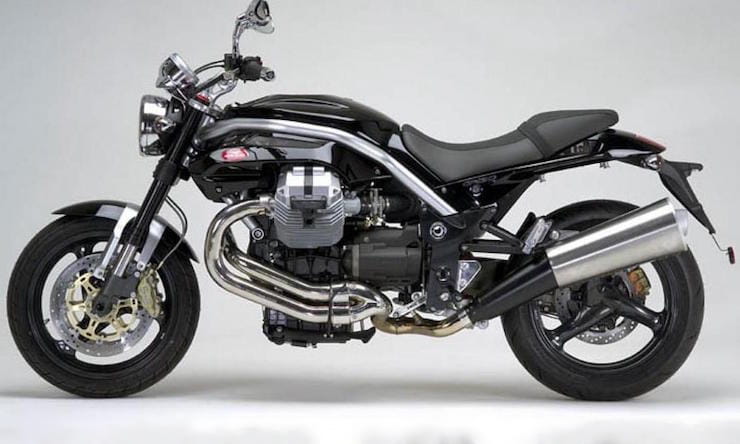 The latter’s more important than the former, here, and is a big part of the Guzzi appeal. In this revamped, updated form, as redeveloped during Guzzi’s Aprilia ownership and which first surfaced on the Breva 1100, the 1064cc twin is a reasonable performer. There’s bags of lazy grunt from little over tickover, the familiar lurching torque reaction from the shaft drive on start up or when blipping the throttle and if you choose to rev it hard, 80-odd horses isn’t to be sniffed at either. But it’s the later, enlarged and improved 8v version you should really aim for, with almost 20 extra horsepower and a healthy wodge of extra torque on top. Anything below 85mph is a joy of seamless torque and relaxed engine that will happily thump out the V-twin tune for hour after hour. Move it long a bit by revving out in every gear and heavy-bass vibration will surface to annoy within an hour. This is old school charm at its worst. Precise fuel injection and gearbox meet up with shaft drive to give a non-involving ride, which is ideal to instead concentrate on the way ahead.

At the Griso’s heart is the then latest version of the ‘big block’ Guzzi Transverse V-twin which in the earliest 1100s retained its 1064cc displacement and two valve heads but benefitted from new fuel-injection, twin spark heads and an all-new ‘CARC’ shaft drive which had the shaft running in a new, single-side aluminium housing which not only looked good, it enabled the use of wider profile tyres and was claimed to reduce the old torque reaction as well. That said, it’s not without its problems, most notably with an inherent flaw with the flat tappets and camshaft, which is well documented on the Griso Ghetto forum. These tappets lose their coatings and in turn can cause major engine failure. This flaw applies to early Norge and Stelvio models, too. That said, many examples will have been sorted and 2013-on bikes should have the updated rollerised tappets and camshaft. The fuel pump/filter/hose assembly also sometimes gives problems, but if it’s survived this long without problems, or been remedied, it’s a pretty solid unit. The gearbox is fairly solid, if a little clunky, too – most find the clutch action a bit heavy – and the exhaust, in stainless, is pretty durable, too. 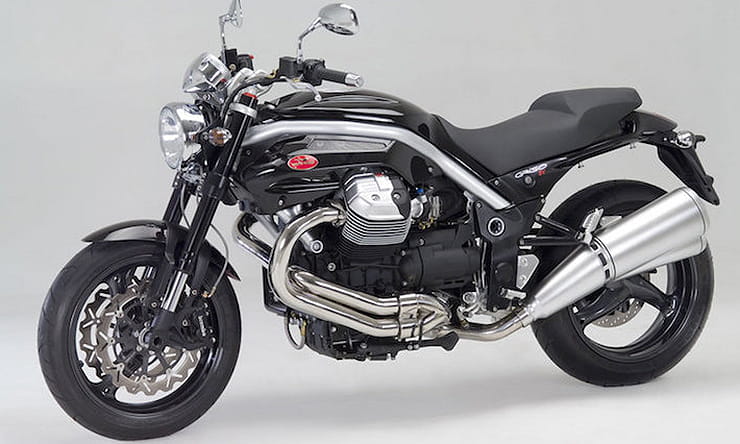 Not really what it’s all about but ultimately, although a heavy, 1100/1200cc motorcycle, the Griso is also a fairly low-revving, understressed, fuel-injected one as well, so fuel consumption isn’t that bad either. That quoted 45mph was when ridden hard. Ride more gently, as most owners surely will, and it can easily rise into the mid 50s with a range approaching 180 miles to suit.

Make no mistake, the Griso is no nimble, sharp-steering lightweight – quite the opposite in fact – this is a long, heavy, laid back motorcycle, but also one that still offers a surprising amount of bend-swinging fun. With reasonably responsive steering geometry, quality, multi-adjustable suspension, fat grippy tyres and a good riding position that puts you thoroughly in control, the Griso is happy to be hustled through the bends yet also a leisurely cruiser with a pleasing ride ridden around on the throttle when the mood takes you. The steering may be a little slow but, thanks to kits weight and length, it’s also planted and well able to give a good account of itself 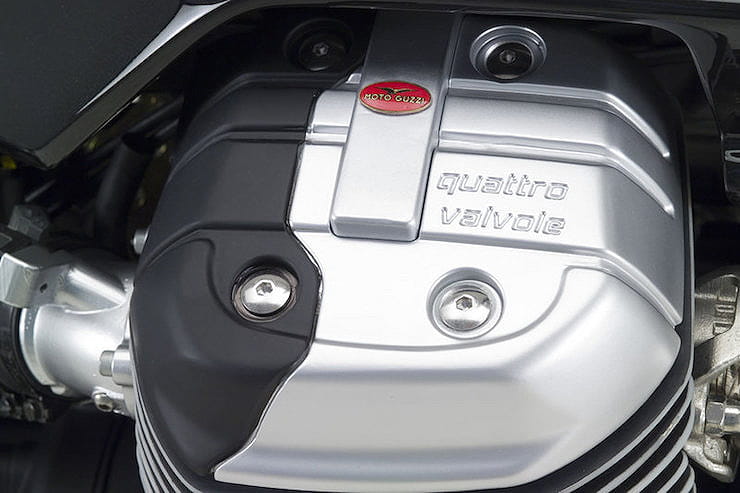 The decent, fully-adjustable Marzocchi suspension is backed up with equally good quality Brembo brakes – fat twin 320mm front discs grasped by conventional four-pot Brembos on the early 1100s, which were upgraded to the latest radial type from the 8v onwards. Power is good with decent feel, but then, to be honest, considering the Griso’s bulk, it needs to be, too. Durability and quality is good, typical Brembo in fact, as long as looked after, periodically cleaned and, ideally, kept away from the worst excesses of a British winter but then, that’s hopefully what most Griso owners, being enthusiasts, would do anyway. If the earlier brakes are considered to be lacking, an upgrade by way of performance pads and braided hoses is recommended.

Another area that’s not exactly the Griso’s forte – but then, if you fancied this generation of Guzzi and wanted to do some touring you’d be far better off with the similarly-powered Norge tourer or Stelvio adventure bike anyway. For most short journeys the Griso is fine. But the riding position can feel like a stretch, particularly for shorter riders, the pegs are a little low if riding particularly sportily and seat comfort isn’t the best, either, although both of the latter aspects were significantly improved with the 8v and SE versions. The 8v got new handlebars and seat and tweaked bodywork, which all helped, with the final example benefitting from an especially tasty quilted leather saddle. With no weather protection if you’re planning any long rides an accessory fly screen or similar is also recommended and is popular among owners, but even then the Griso is still a long way from being a comfortable machine over distance.

Although fuel injected and fairly modern by Guzzi’s usual standards, the Griso is still very much an ‘old school’ type bike with none of the electronic rider aids, fancy TFT screens and switchable riding modes we’ve become so used to on the very latest machines. But then, that’s a big part of the Griso’s raw appeal, too. This is a big, bristly, air-cooled monster of a motorcycle with all the tactile, sensory character that goes with it. That said, it’s decently equipped and well built. Brakes, suspension and so on are good quality; surfaces are well-finished and the later SE, in particular, gets lots of premium touches by way of satin paint, wire wheels, a premium leather saddle and a black-finished frame. There’s a reasonable amount of accessories available, too, ranging from cosmetic add-ons to practical items like fly-screens, although if you end up looking for luggage and pillion options, you’ve probably bought the wrong bike… 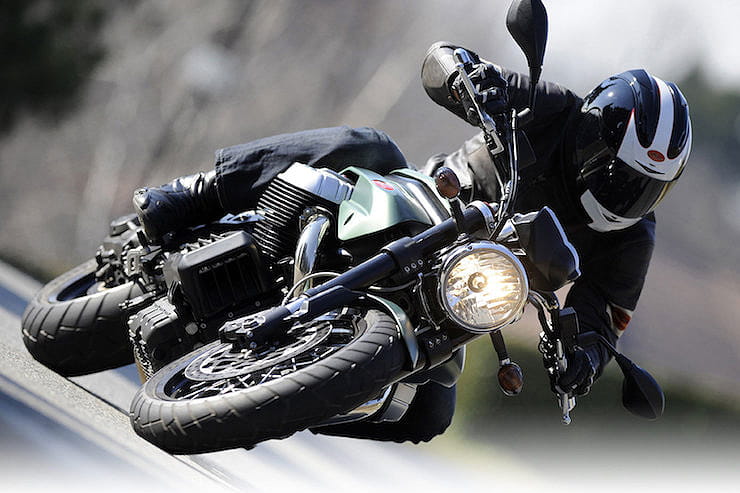 Ultimately killed off by ever-tightening EU emissions and noise regulations, the Griso, in many ways was a final hurrah for the big, old, air-cooled Guzzi roadster – and it was a more than decent effort. The styling’s not to everyone’s taste, there were some problems with very early examples, comfort’s not great and there’s no getting away from the fact that it’s a big old bus to throw around. But, for some, that’s the whole point. If you want a distinctive, characterful Italian V-twin roadster, it’s a far rarer and beefier beast than Ducati’s Monster, can be a stirring joy to ride, especially over short distances and the later, 8v and SE versions in particular are classy, handsome and pretty good value used, too. The Griso 1200 personifies Moto Guzzi machinery. It is not a racing machine but carries components that wouldn’t look out of place on a race grid. It isn’t rapid in performance terms and doesn’t require the attributes of fighter pilot to control one. All it needs is someone who appreciates a relaxed ride.

Three things we love about the Griso…