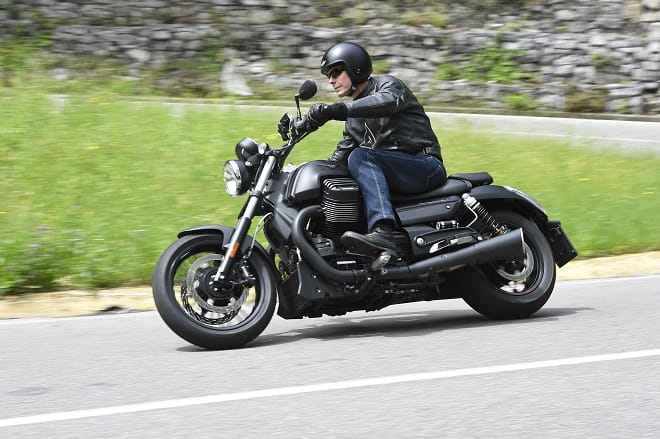 The Audace might end up being this year’s most frequently miss-pronounced motorbike, because to Italians it’s the “Au-da-chay” – meaning bold or audacious – rather than something that rhymes with Thunderace, as English speakers might guess. Either way, it’s a suitably tough and Italian-sounding name for a big V-twin with a muscular profile, black detailing and matt paint finish.

Guzzi’s publicity material describes the Audace as a “brazen interpreter of the Moto Guzzi spirit”. Strong words for a relatively simple aircooled V-twin that shares most of its components with the two-year-old California models and the shiny new Eldorado. Whether painted in matt black or the alternative matt red it has a much more subdued image similar to that of the 744cc V7 Stone.

The Audace gets its aggressive look from parts including wide drag bars, small headlight and carbon-fibre front mudguard. It’s very similar in profile to the California Custom, but differs from that model with its bars, bare front forks (instead of the Cali’s shrouded legs), shorter pipes, two-part seat and a pair of simple footrests instead of boards. 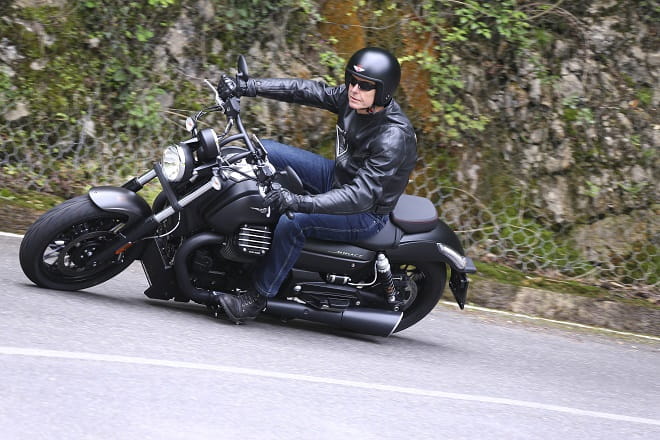 Its engine is the same aircooled 1380cc, two-valves-per-cylinder V-twin unit that powers the Californias and Eldorado, and which Guzzi describes as the biggest ever European V-twin. The new exhaust incorporates a revamped catalytic converter that helps the Audace become the first of Guzzi’s big streetbikes to pass Euro 4 emissions, without affecting the torque curve or claimed maximum of 96bhp at 6500rpm.

Chassis layout is closely based on that of the California Custom, and uses same vibration-damping engine mount system for the tubular steel frame, plus a combination of 18-inch front and 16-inch rear wheels, the latter with a fat, 200-section tyre. Despite the front end’s slimmed-down look the suspension is also very similar, with 120mm of travel at each end, and a pair of remote-reservoir rear shocks that are adjustable for preload and rebound damping.

Given that it shares so many parts with Guzzi’s other 1400cc V-twins, I was quite surprised by how different the Audace felt after I’d thrown a leg over its two-part seat, which at 740mm is just as low as those of the others. The black drag bar is very wide, and was a fair stretch away, though my long arms meant this wasn’t an issue for me, as it was for a couple of smaller riders. The more leant-forward riding position meant that the footrests seemed a bit too far forwards, although they’re slightly more rearset than the other models’ boards.

That more aggressive riding position made the Audace’s engine performance seem slightly more lively, although Guzzi insists its output is identical apart from minor mapping changes to suit the new pipes. On this self-proclaimed bold bike I wasn’t in the mood to bother much with the softer Turismo riding mode, so stuck to Veloce (“Fast”) with its slightly more immediate throttle response from the ride-by-wire system.

This biggest of Guzzi motors is tuned for grunt at low and medium revs, and delivers just that, kicking out its 88ft.lbs torque maximum at just 2750rpm. In the lower gears it pulled happily from 1500rpm, juddering slightly at very low revs but then magically smoothing as the engine-mount system did its job. The shaft-drive transmission’s slightly clonky six-speed box has a simple gearlever rather than the California models’ heel-and-toe lever, but shifted cleanly enough provided it wasn’t rushed.

The Audace stayed very smooth at higher revs, too, so there was no problem getting the big, round-faced dial’s tacho needle towards the 7000rpm limiter. On a few short straights the big bike pulled hard towards the ton mark, heading for a likely top speed of about 120mph. With minimal wind protection and a restrained but pleasant bark from the slash-cut silencers there was enough going on that it felt quite exciting. 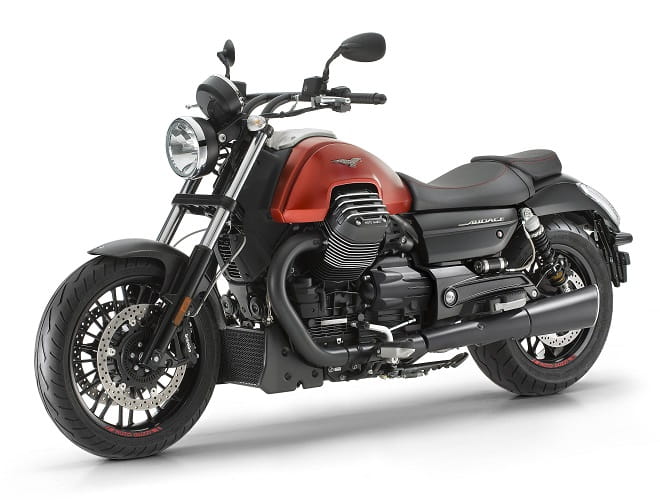 Despite its name and bad-boy image the Audace was about as aggressive as a well fed black Labrador, and worked best when cruising at a fairly leisurely pace. It comes with cruise control as standard fitment, though the twisty launch route didn’t give much opportunity to make use of it. The electronics also includes adjustable traction control that changes with engine mode, and which might be handy in the wet although on a dry road you’d have to be brutal with the throttle to get the rear Dunlop D251 near its limit.

Chassis performance was respectably good, even so. At 299kg without fuel the Audace is no lightweight, and its laid-back geometry and long wheelbase also contributed to a very solid feel and a certain reluctance to change direction. But a firm nudge of the inside bar got it steering quickly enough. In typical Guzzi style its suspension was sufficiently well damped to give plenty of confidence, and to make me wish the ground clearance was generous instead of merely adequate by cruiser standards.

Guzzi V-twins have almost always had good brakes, too, and that’s true of this one. Its 320mm front discs and Brembo radial four-piston calipers bit hard, helped by a smaller rear disc and efficient ABS though, as with the other California family models, not by a version of Guzzi’s traditional linked system.

Other aspects seemed respectably rider-friendly, at odds with that aggressive look. The 20.5-litre tank, shared with the other models, should give 150-mile range although hard riding can bring consumption down to 35mpg. Seat comfort seemed pretty good, though less so for a pillion, whose removable pad doesn’t include anything to hold. The accessories list includes carbon-fibre and black-anodised aluminium parts designed to enhance the bike’s moody image.

The Audace certainly adds a touch of stripped-down style to Guzzi’s range although in looks and performance it’s very close to the California Custom, and costs £400 more, at £15,135. Still, it has a slightly different character of its own, and should encourage some more riders to ask for a test ride. If you’re one of them, just remember: it’s pronounced “Au-da-chay”… 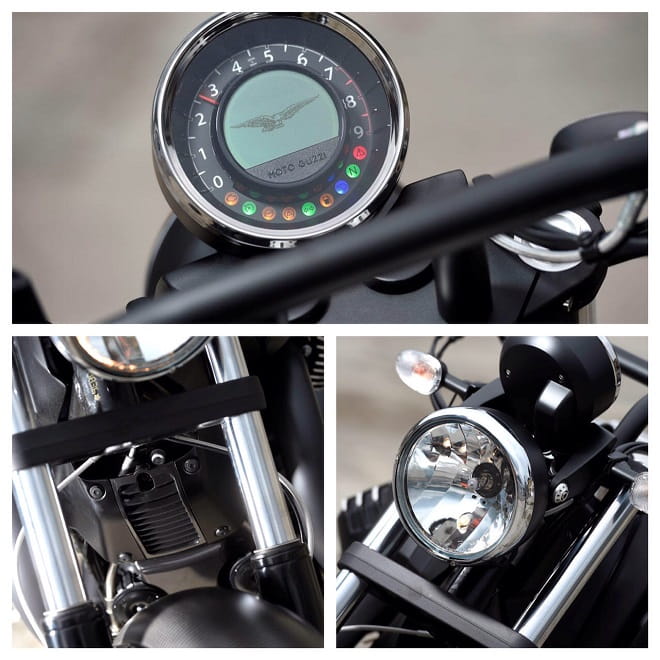 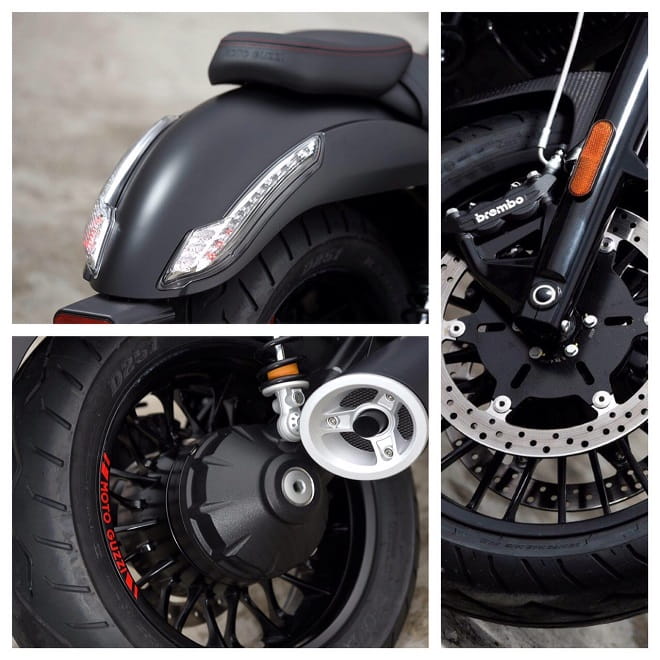