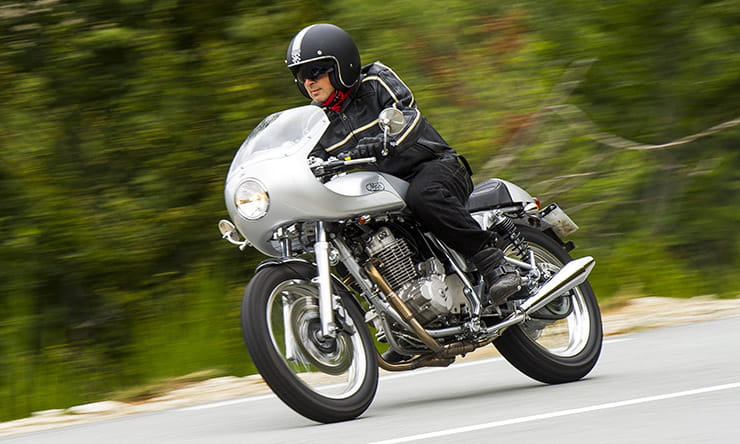 Cafe racers really grew out of what the young (and they were all under-25s in those days) were doing to their bikes in the 1950s and '60s, and the currently booming Ace Cafe has a lot to thank them for. Yes, the cafe racer and retro roadster style is back with a vengeance, and whether you call it nostalgia, or a reaction to expensive, high-tech motorcycles, it's certainly selling well – nearly half of all Royal Enfields now sold in the UK are Continental GT's.

The French clearly love this Brit bike style as well, because French brand Mash has built itself up by importing Chinese-made 125s and 250s that look like something out of the Sixties. They style the bikes, the Chinese make them, and it's a formula which clearly works, Mash having topped the geared 125cc sales charts in its home market for the last three years. A couple of years ago,they followed that up with the 400cc Road Star, in exactly the same style but with an engine based on that of the Honda XBR500 of the Eighties.What's more, you can buy them in Britain too.

The latest addition to the Mash range is this, the TT40 Cafe Racer, and to my mind they've got the look just right. Every element of a home-brewed racer for the road is there: the ribbed seat with racing hump, graceful half fairing and spoked alloy rims. They've got the details right too – the bar-end mirrors and tiny teardrop indicators look as if they were ordered from a custom catalogue circa 1966. To back all this up, there are matching analogue clocks, low set bars and rearset footrests. The TT40 might be a pastiche, but it's a pretty good one.

The hardware spec is almost as retro as the styling. If you remember Honda's XBR (itself a sort-of retro bike), then this is the same SOHC four-valve single, though now made in China by Shineray, downsized to 399cc and with fuel injection to meet the latest Euro 4 limits. In a mild state of tune, it puts out 27.6bhp at 7500rpm, and 22lb ft at 5500rpm. This elderly engine is housed in a twin-shock tubular steel frame with simple, non-adjustable front forks and a five-speed gearbox. True, the bike does have ABS (another part of Euro 4), but apart from that there's none of the clever electronic stuff – so don't look for traction control or riding modes, because there are none.

The TT40 certainly feels the part of a cafe racer when you climb on board, but it's hardly intimidating – the riding position isn't that radical, the seat is only 800mm off the ground and the whole bike weighs just 151kg dry, according to Mash. The seat itself is pretty comfy for one, but large pillions might not fit well between rider and that lovely looking hump – there's also no grab rail.

Mash flew us out to Corsica to ride the Cafe Racer and it was easy to why. The sinuous roads, twisting up and down through the steeply wooded slopes, really suited the bike. It's small enough to inspire confidence, and steered precisely through the curves, the fairly basic suspension coping well with sometimes broken tarmac. The Kenda tyres gave no nasty moments in the dry, and if they look like old Dunlops, then that's no coincidence, as they've been moulded to look just like the K81, better known as the TT100.

With roads like this, where no straight was longer than about 300 metres, the bike's modest power wasn't a problem. In fact, the delivery was very good. It's handy with old-style motors like this to forget the paper figures (yes, some 300cc scooters have more power) and concentrate on how it works out in practice. The Mash might never reach its nominal 10,000rpm red line (the ignition cut-out comes in at 8500) but it does have very nice midrange response from 3000rpm upwards. So it was possible to stay in third gear round tight twisties and use the torque to power out.

The TT40 isn't a fast bike, but it's quick enough to be fun, and you don't need to rev it out to enjoy.You can of course, and some vibes do come in over 5000rpm, but they're not serious. Given the nature of the roads, we couldn't test the Mash's motorway manners, but from experience with the basic Road Star, it should be happy to sit at an indicated 70-75mph for as long as you want. Mash says the gearing is slightly lower than that of the Road Star (aiding acceleration) but that top speed is a bit higher at a claimed 95mph, thanks to the better aerodynamics of the lower riding position and that half fairing. The lower gearing helps tractability too, and the Mash was quite happy to trickle through Corsican villages at 2500rpm and pull away without changing down.  The gearchange is pretty good – short travel and precise, though it was reluctant to find neutral at a standstill. Maybe that's taking Brit bike authenticity a bit too far...

ABS certainly wasn't part of the original cafe racer tradition, but on the Mash it works well, with single discs at both ends, and the anti-lock just coming in on hard stops in the dry. They're not linked, so can still be controlled individually. Interestingly, the Road Star and Scrambler Mashes have anti-lock on the front disc only, as Mash wanted to keep the rear drum brake. And on all bikes, the ABS can be turned off, if you go through a procedure, though I can't see why you would want to. It's default setting is 'on', in any case.

It's been said before, but Chinese quality has come on a long way in the last few years – if Chinese bikes were to break out of bargain basement 125cc territory then they had to. The Cafe Racer certainly looks well built and the finish is fine, the switchgear feels good and the whole thing has a two-year unlimited mileage warranty. What it doesn't have is a hallowed badge on the tank, which the Royal Enfield Continental GT does. The Indian-made Enfield is the Mash's closest rival, costing £300 more (plus possibly more still when it arrives in Euro 4 form) and is a very different riding experience, with its long-stroke, lower-revving 1950s style single. Which one you pick is really down to personal preference. 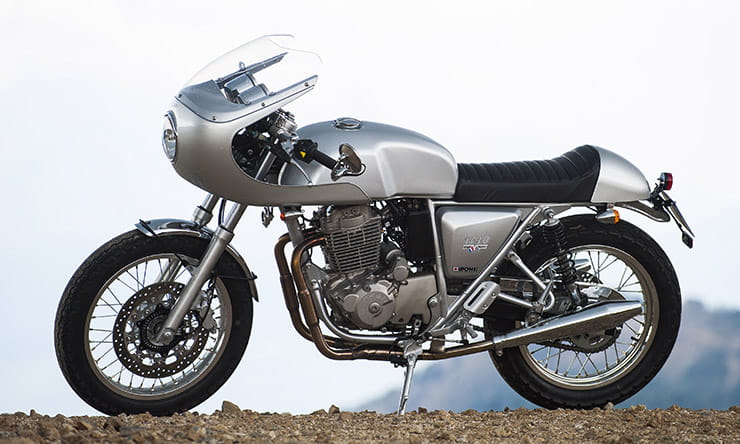