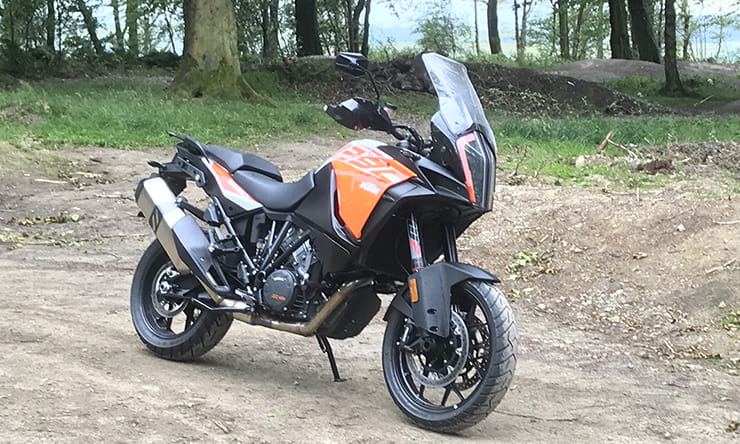 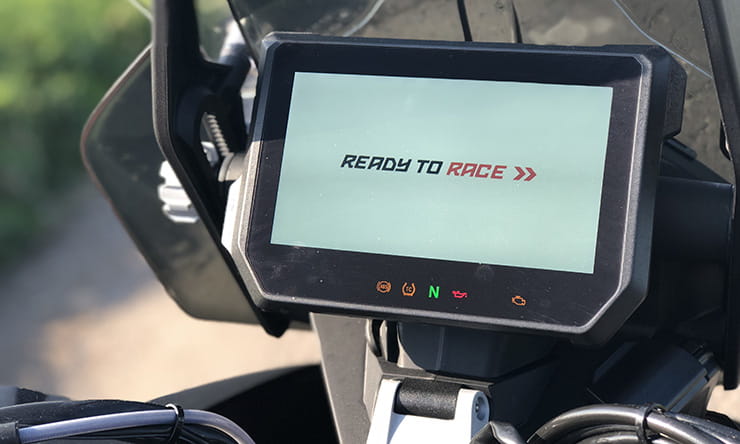 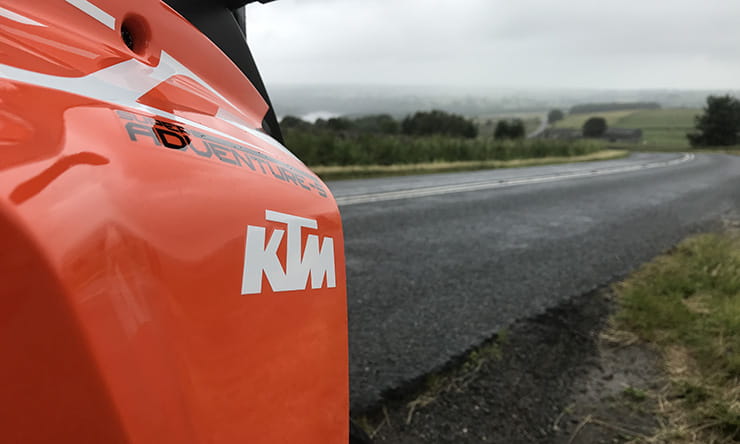 ‘Ready to Race’. The first thing you see on the beautifully plush TFT display when you switch on KTM's Adventure 1290S is a flipping marketing message – how very 2018. What if I just want to get to work? Perhaps KTM should add a question mark and a couple of tick boxes marked ‘yes’ and ‘no’. If you select ‘yes’ then hopefully a message appears explaining that racing on the road is dangerous, illegal and KTM accept no responsibility etc. If ‘no’ perhaps it should give a range of other motorcycle activities you might care to choose. ‘Ready to amble slowly and enjoy the view?’ perhaps.

Seriously, I love KTM’s determination to be the rebellious, cool kids and if you haven’t ridden their new 790 Duke yet, then get yourself a test ride because that bike is distilled Austrian Orange and once the traditional end-of-season KTM discounts arrive, it’ll be a bargain too. This bike, the mostest, roadiest and tech-infested of their humungous Adventure range is about as far from a race bike as I can imagine, unless there’s a series for electronically-enhanced giraffes on amphetamine I haven’t heard of.

BikeSocial has this Adventure-S on long term test over the summer. Today’s ride on the longest day of the year is a journey to a destination two hours away, but I’ve got up early and have five and a half hours to get there. So the plan is to do some ambling, some blasting, some head-down thrashing and maybe a bit of adventuring too. The back roads from East Anglia to North Yorkshire, a couple of lost laps of Leeds and then let’s see how fast we can get home. Ready to race? Er, no. Ready to experience all the emotions and thrills that biking brings? Oh, go on then…count me in. 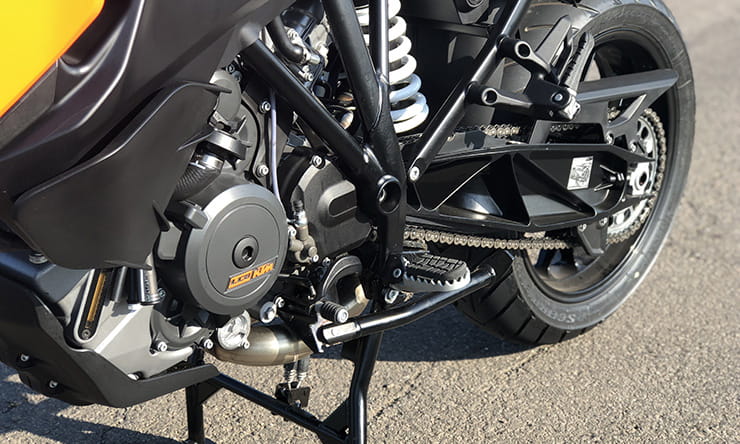 KTM’s 1301cc, 8v V-twin makes the same power and torque as Ducati’s latest Multistrada, but feels (and sounds) very different. Where the 90 degree L-twin Ducati feels like a sports bike engine grudgingly adapted for more gentle use, the 75 degree KTM vee is more flexible (despite lacking the Duke’s variable valve timing), easier to ride gently and needs less rider involvement when you’re simply wanting to get home. KTM have been evolving this motor for 15 years now and it shows. The transition from 2003's carb-fed, lumpy delivery through a succession of fuel-injection updates has led to this torquey, predictable, powerful smoothie. We still don’t understand why it sounds like a diesel on start-up, but we’ll forgive it because it works so bloody well.

Modern fuel injection and clever traction control mean that big twins don’t bounce your eyeballs off the back of your skull or knock the wind out of you like they used to when you get giddy with the throttle. Long term, that’s probably a good thing, but if KTM want to live up their own hype, maybe there should be a ‘dipstick’ mode (triggered by a big, red button under a Titanium flap) to complement the street, sport, rain and adventure ones supplied as standard.

Seriously, we shouldn't underestimate the amount of electrical complexity that allows a big-twin cylinder motor to make such smooth, glitch-free power from 1500rpm in top gear all the way through to the red line. The KTM is smooth at low revs, strong in the middle and, were you irresponsible enough to do 100mph, it’s doing a shade over 5000rpm. Schoolboy maths suggests that by that measure, shortly after the 10,000rpm red line it will  be doing 200mph. Thankfully, the laws of aerodynamics mean it’ll be well short of that number. Clearly it’s fast and there’s something about big KTMs that seem to shrink distances and journey times that doesn’t happen on other bikes. The gearchange is slick, clutch is light and you can find neutral at a standstill at least five times out of ten.

Fuel consumption is getting better as we put miles on the still-tight engine. With just over 1000 miles done it’s currently averaging 45.8mpg or about 230 miles to a tankful (23 litres), which is ok, given the speeds ridden and the aerodynamic efficiency of a monkey riding a small hippo. 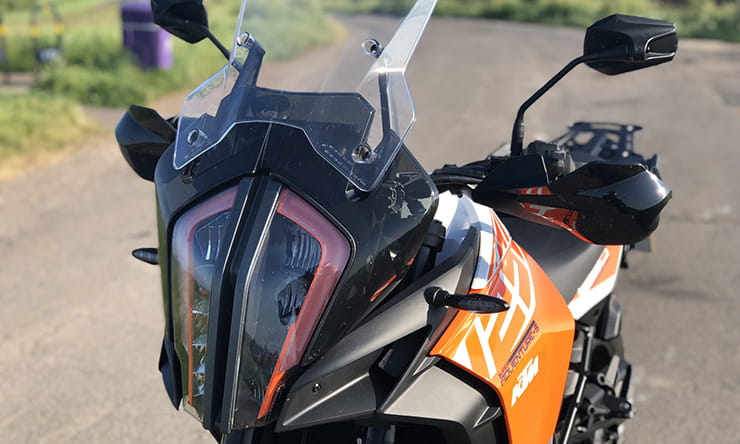 This is a tall bike, which might seem obvious, given it’s a 1301cc adventure bike, but even on the lowest seat setting, it is considerably taller than the BMW or Ducati competition. I’m six foot and can only just get both feet down on the lowest setting. The upside of that is that your view over traffic/hedges/other giraffes is brilliant and (in these colours especially) it would be hard for any driver to claim they hadn’t seen you. The downside is that all that height doesn’t leave a lot of room for seat padding so it appears KTM didn’t bother to fit much (there is an optional comfort seat). Arse-ache sets in after an hour, but then doesn’t get any worse for another 90 minutes, at which point it returns with some vengeance.

The riding position is superb, mixing comfort with control and the screen does a good job of keeping the wind off while being easy to adjust on the move (there’s a knurled wheel either side of the screen – simply twist either to raise it up or down). Semi-active WP suspension works well in most circumstances, self-adjusting depending on what it feels and predicting the terrain ahead. It still feels weird looking down to see wires coming out of your forks like a backstreet lobotomy and the disappointment when it doesn’t quite adjust in time is greater than on a conventional system. 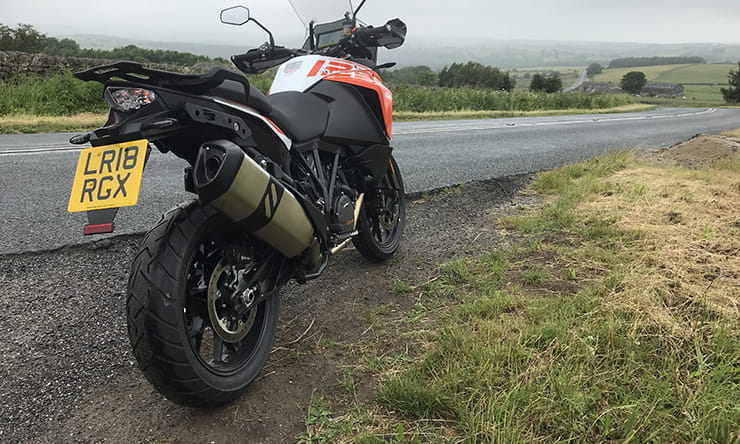 With the bike in ‘sport’ mode (for the sharper throttle response) and damping in ‘street’ (for some urban comfort) there was a little too much travel and not enough damping when we got to the  twisty b-roads. It’s bad enough to be on a normal-height bike that bucks and wobbles, but on something this tall everything is exaggerated. Switching the damping to 'Sport' transformed it though, turning the 215kg adventure camel into a thoroughbred racehorse. On Lincolnshire's bumpy back roads, the Adventure S has roadholding and cornering control that challenges the very best sports bikes. What it doesn't have (or at least, what I haven't worked out yet) is the natural steering of something like a Fireblade because the rider is so far away from the bike's centre of gravity and the handlebars are a foot wider.  I wonder if anyone's ever fitted clip-on bars to an adventure bike? Call me stupid, but I'm curious to know what one of these would be like with lower, narrower bars. 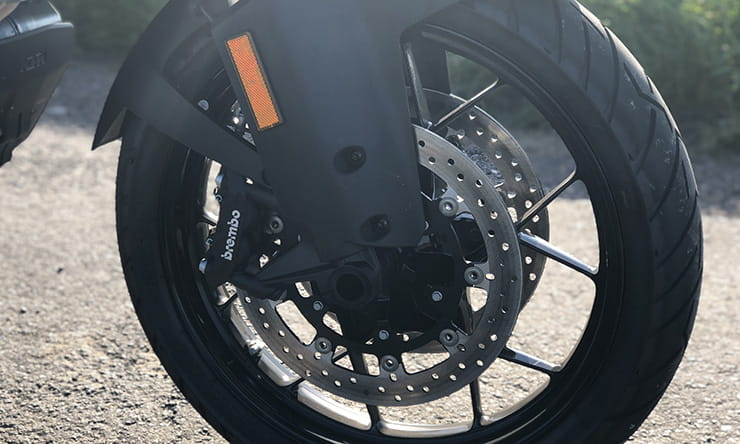 Plenty of power although the fronts don't always feel as strong as they are because the electronic suspension controls the amount of dive more accurately than conventional units. The rear brake works really well on damp roads, not just for slowing down (with the KTM's sophisticated Bosch cornering ABS you can still use the front most in the wet), but for added stability and confidence through damp corners.

In poor conditions there's a real sense that every single control on this bike, whether throttle, clutch, electronics or brakes are making life easy by working together to add options to control the bike's speed or road position or line through a corner 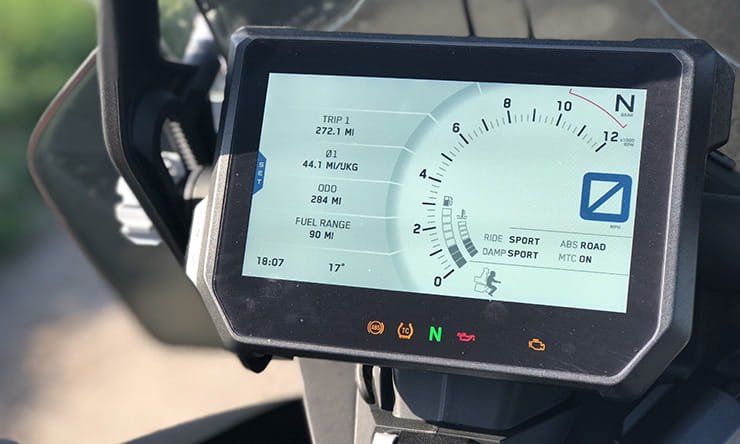 Like most KTMs, the Adventure S has the full electronic safety package. Lean-angle-sensitive traction control, cornering ABS, four riding modes and the semi-active suspension. Plus, a keyless ignition system (including fuel filler) that works well, 6.5in full colour TFT dash and Bluetooth connectivity.

Hopefully you’ll never know how well most of them work and the only niggle is the electronic steering lock, which needs you to learn the ‘knack’ to release it. Sometimes the system doesn’t know it’s been set and you have to move the handlebars left and right before pressing the button to release it. 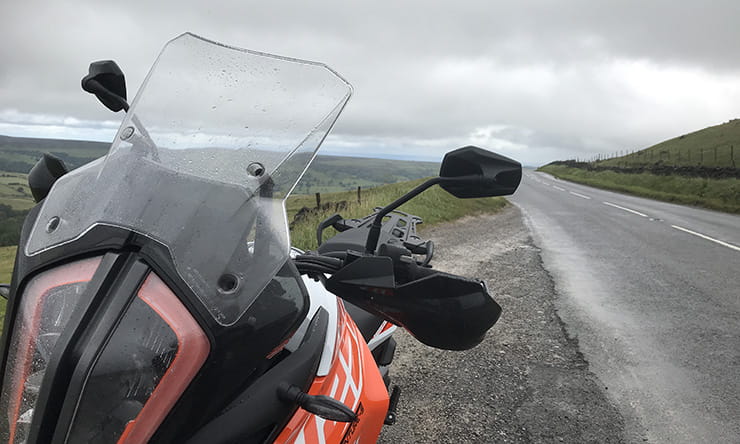 Halfway home it all falls into place. Most of the bikes we love are the machines that make things easy. Whether that easy is going fast, riding slowly, braking from silly speeds, going round corners, crossing continents or (in these colours) finding it in the bike park. If the bike does it well, we love it. Listen to the KTM hype and you’d almost believe this is some kind of unrideable, crazy lunatic machine, hard to control and suitable for Dakar riders and headbangers. That might be the road-test fantasy drivel, but the reality is very different.

It’s like some rogue R&D cell deep within Honda built an adventure bike and somehow it went on sale before the production dept got involved and smoothed off the rough edges. The Adventure has all the brilliance and ability of a great Honda, but with a tad more sharpness, some built-in mischief and a seat that no Honda would ever be allowed to wear. I couldn’t get along with our Mutlistrada, but I love this KTM, which only goes to show why getting a proper test ride is important.

Right now, after the first 1500 miles it’s pretty much a universal thumbs up for the KTM for those of us over six-feet tall. The next phase is to live with and learn the electronic systems to optimise settings and to work out whether the seat really is uncomfortable or whether we are simply a bunch of southern softies who need a gluteus workout programme. Any tough northern types who fancy a go, please get in touch at enquiries@bikesocial.co.uk 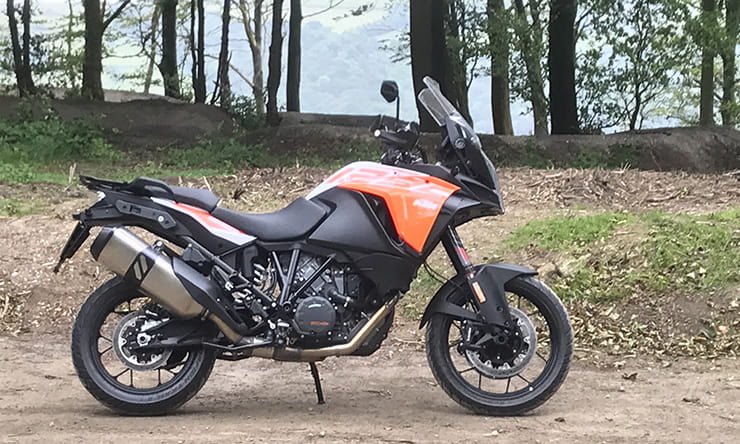