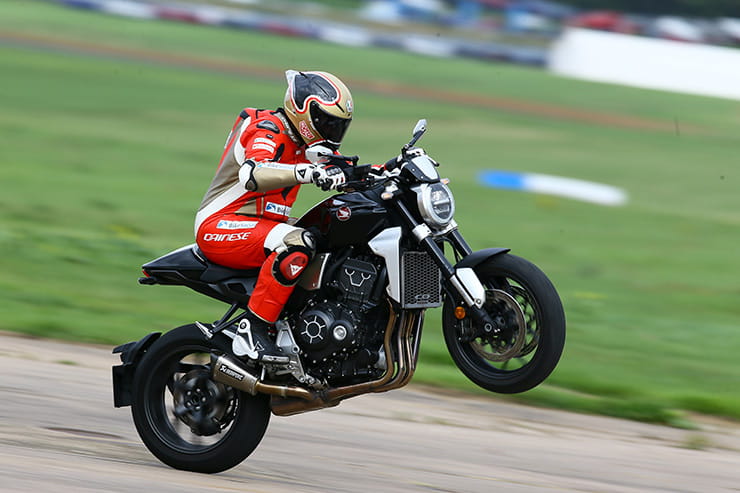 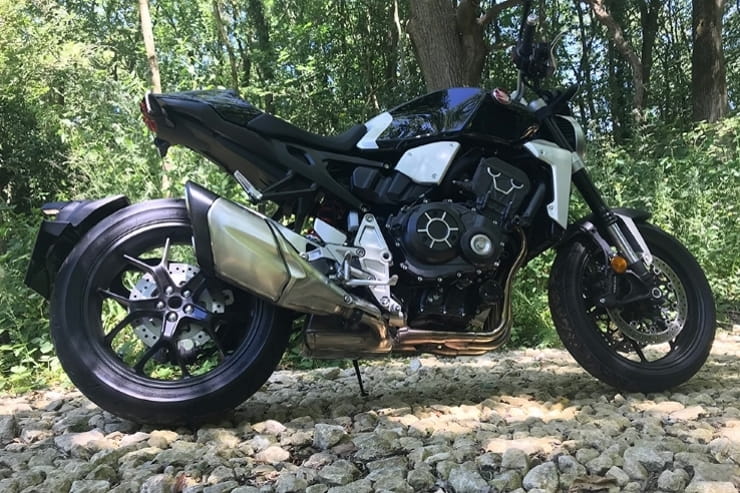 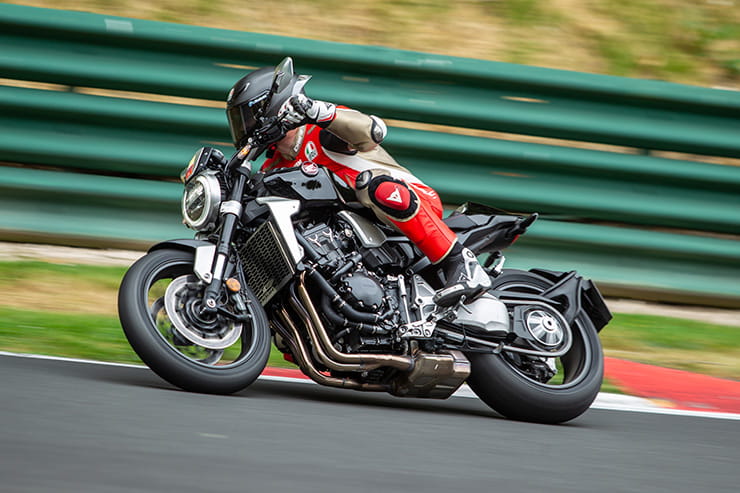 After happy memories of a beautiful holiday romance and a handful of letters later over the following few months, you’re due to meet again. You’re worried, will she be as hot in real life? Will she be as entertaining? Will there be the chemistry? Is Peterborough going to offer the same rush of endorphins as the Rhonda road in Southern Spain?

Back in March 2018 I got to ride Honda’s new CB1000R+ model at the press launch in Spain. And boy was I bowled over. Both on the spec sheet and at first glimpse you might even be tempted to swipe left (or right, I’m not sure how those dating apps work, but the direction in which you heartlessly and effectively reject a person on looks alone or in this case power figures and facial features). However, as I explained in the full review, the latest sporty naked from Japan is a cracker to ride; alert and absorbing, friendly yet flighty. As eager as a Labrador chasing a ball but it prowls like a wolf homing in on its supper, 150-odd miles on the new Honda was an extremely rewarding experience and I never felt it needed wrestling to keep it under control.

Fast forward to the summer and I took delivery of the long-term loan version. Identical to the press launch bike except for one thing; tyres. We’d been running Bridgestone S21’s in Spain – a fabulous product which worked particularly well on the smooth roads and Ascari track alike, but the bike arrived on Dunlop SportMax in the UK. Upon questioning, a Honda spokesperson confirmed that both Bridgestone and Dunlop “are the official supplied tyres from the factory” and “a customer may be able to advise a preference”. The Dunlop’s of course are perfectly fine for all purpose riding, and they’re competent in the wet too. This is a bike where inadequate rubber will be found out given its agility and powerful acceleration qualities.

So, several months later and I hear you ask, ‘was it just a holiday fling?’ 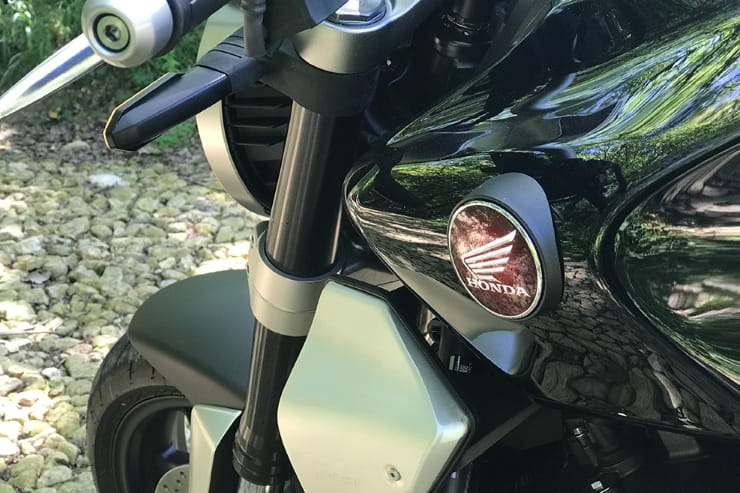 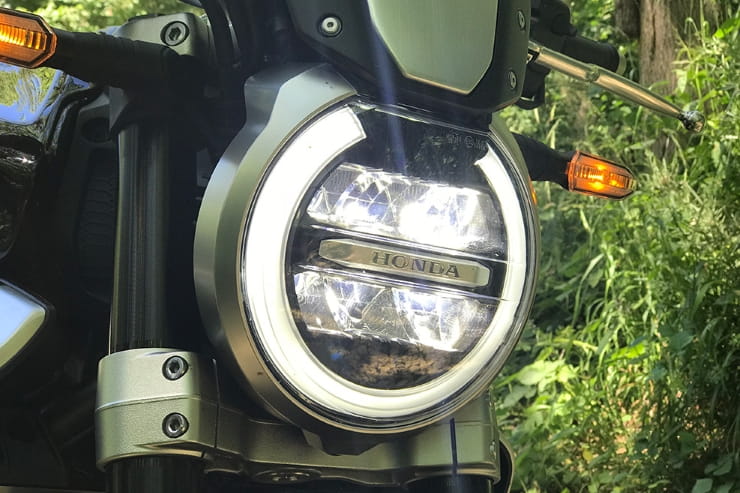 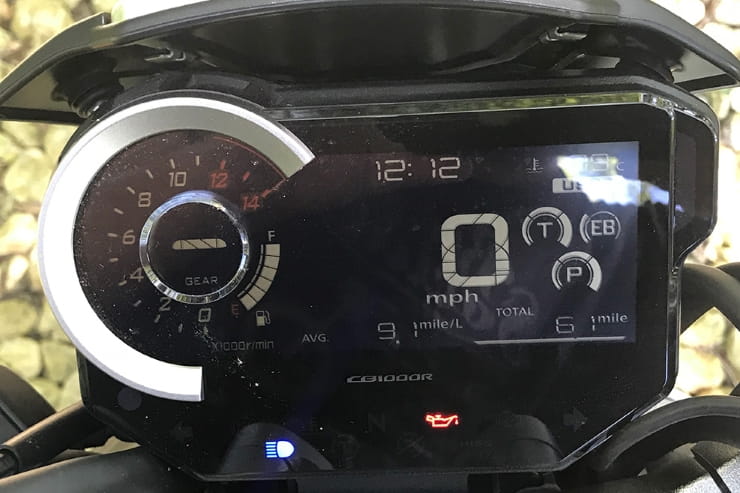 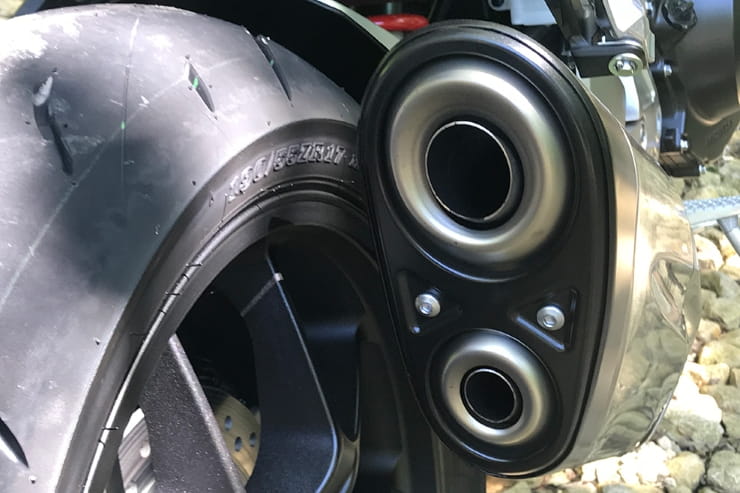 Even before we took delivery our chums at Performance Parts had been in touch volunteering to replace the rather large yet one of the more stylish Euro-4 end cans. The original part makes a cracking din but once equipped with an Akrapovic Titanium Slip-On Silencer the commotion from those four cylinders is even better. It of course saves a few grams and looks more-than-just-a-little slicker too.

Keep the CB1000R+ high in the rev range for plenty of reward with peak power at a lofty 10,500rpm and if, like me, you have the Akrapovic end can fitted, the neighbours won’t actually mind because it’s more of a refined racket as opposed to a raucous gravelly din.

Handily, in our upgrade package also came a set of Rizoma mirrors which look pretty futuristic and while they do a top job at their sole requirement of offering a rearward view, their adjustability isn’t so easy. Three-way adjustability is all very well but the requirement of an Allen key to make said adjustments isn’t so convenient. The argument for the mirrors is that, once set, why would you need to move them around.

Also from Rizoma come a set of bar-ends which, in their aluminium finish are a stylish addition and offer protection to the handlebars in case of a spill. While I mention style, we also swapped the standard-fit brake and clutch levers for a set of ASV’s which are miraculous – they have a pivot design meaning they spring back in the event of a crash and therefore they come with a 5-year crash damage warranty. They also have a 180-increment adjustment range through 4 inches. They look sleek and have zero play. Everything you’d need in a set of levers and the quality of finish matches that of the Honda. 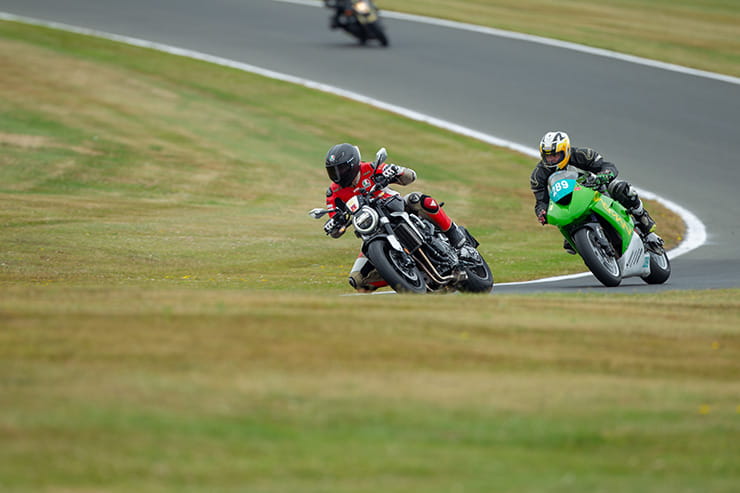 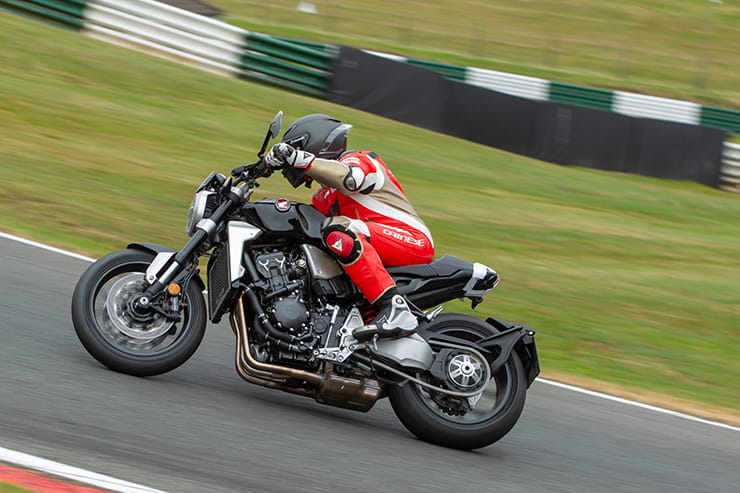 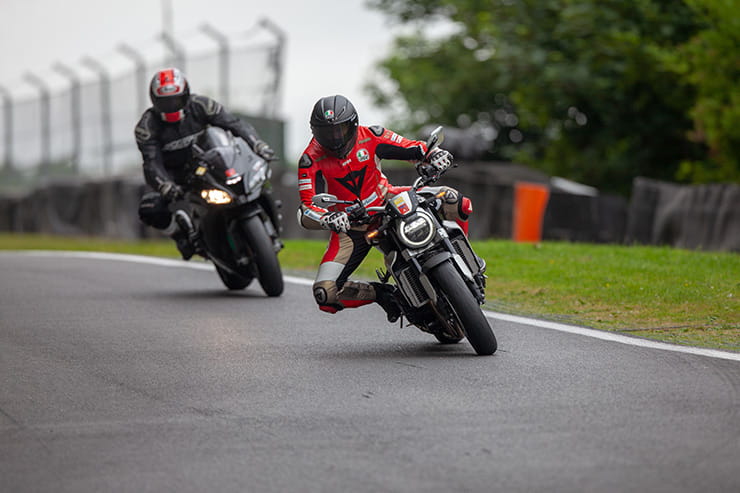 Having been invited to a Michelin-run track day at Cadwell Park I thought it only fair to switch to the Bibendum-marked rubber and because I’d had good memories of the Power RS launched in 2017 I opted for those instead of the Power Cup Evo. Fresh with a set of new boots (and a brand new set of Dainese #CustomWorks leathers) out I went in the fast group on my naked street machine surrounded by track day-ready BSB-wannabes freshly shorn of their tyre blankets. I’ll trundle around at the back taking it steady while the tyres bed in, I thought. Realistically, after about two laps they were up to temperature and feeling good. The Honda has a lively front end for track use and not masses of ground clearance but then every single person reading this will be shouting, “it’s not designed for track use”. And you’re right. But it did give me the chance to see how the performance matched up and to really stretch its legs.

As the peak rev figure will testify, the CB1000R begs for revs. The short, snappy first three gears offer plenty of acceleration performance out of the slower corners, matching its claims as a Fireblade beater to 60mph but the top speed is limited which is an obvious thing to write given the purpose is not to match the invisible track day trophy hunters.

All the tyre and lean angle were available in only the first session such was the ability of both bike and tyre. The limiting factor was the hero blobs. Even with the seat height of 830mm making it high enough for a comfortable yet sporty riding position for a six-footer like me, and the ground clearance of the footpegs which are plenty of real world road-riding ground clearance, however, on the track I didn’t necessarily mind dragging then around Chris Curve at the top of the circuit but I feared them digging in and sending me skywards when against some of the larger, old-fashioned kerbs. What must have been either annoying for any riders slow enough to be following or a really handy safety device was every time I squeezed the brake lever with any real track-style force, the hazard warning lights came on.  On track, the rear shock doesn’t stand up to much and once I could feel the extra lollop, I couldn’t get away from it on the road too – even BikeSocial’s Publisher, Steve Rose, whipped out the underseat spanner set and increased the preload for a motorway munch from Peterborough to Leeds and back. There’s a fair chance that under normal riding conditions and circumstances the standard shock setting is amicable enough.

Back to the tyres and the recommended track pressures for the Michelin’s was 31/27 (cold) while on the road the manufacturers recommendation is 36/38. All well and good but after finding the limits of the bike before it got dangerous, I headed for home but forgot to put any more air in the tyres making the Lincolnshire A-roads somewhat squirmier then before. 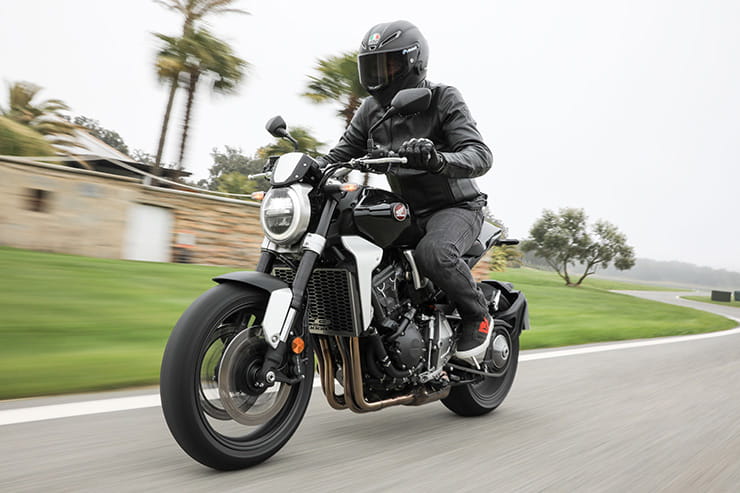 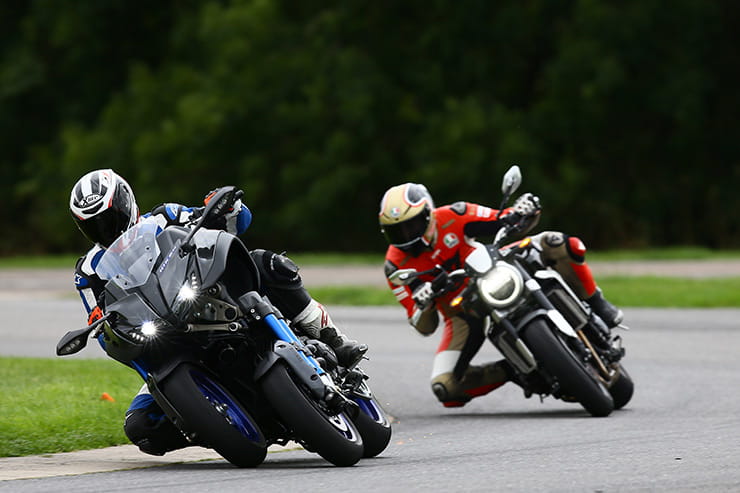 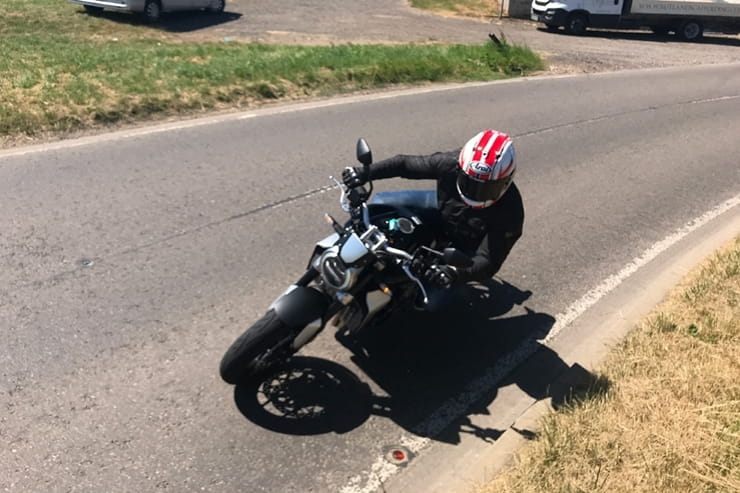 To Work and Tomfoolery

As a commuter for my 10-miles to-and-from BikeSocial HQ, there’s barely a better machine I’ve ever used. Sure, I could count anything with a top box or panniers as more convenient. Even something with a heated seat or a screen as more comfortable. Anything more economical would be handier on the wallet but as an all-rounder that makes every journey interesting and keeps me grinning then I’d opt for the Honda. It’s comfortable, has heated grips, quick shifter and autoblipper, awesome brakes and is narrow and nimble enough to dart through any slower traffic.

Meanwhile, at Bruntingthorpe aerodrome in September, I used the CB1000R+ as a guide bike while introducing nine readers to the wonders of the Yamaha NIKEN. Pairs of riders would have a taste of the three-wheeler for two laps of the airfield while I led. It also gave me a chance to chase wonder-wordsmith and regular BikeSocial contributing road tester/feature writer, Simon Hargreaves, while he gave the Yamaha a proper work-out away from the roads. As I aimed to copy his lean angles, something which the NIKEN is rather adept at, I felt so comfortable on the abrasive, rutted surface of Bruntingthorpe and never out of control. Oh, that and an opportunity to see how easily it would wheelie once the TC was switched off!

The Honda is a wolf in sheep’s clothing. Demure and graceful on appearance yet lively and exciting once you get the clutch out in first. I bloody love it. 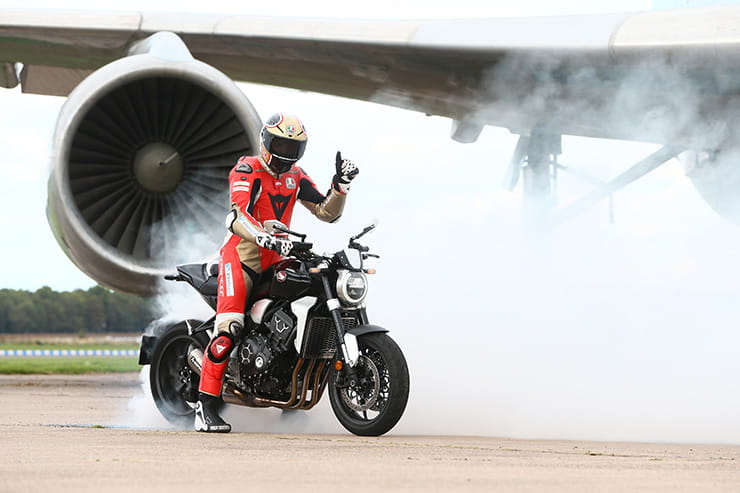 What does this all mean? Read the glossary of spec sheet terms here

For an insurance quote on this bike, click here