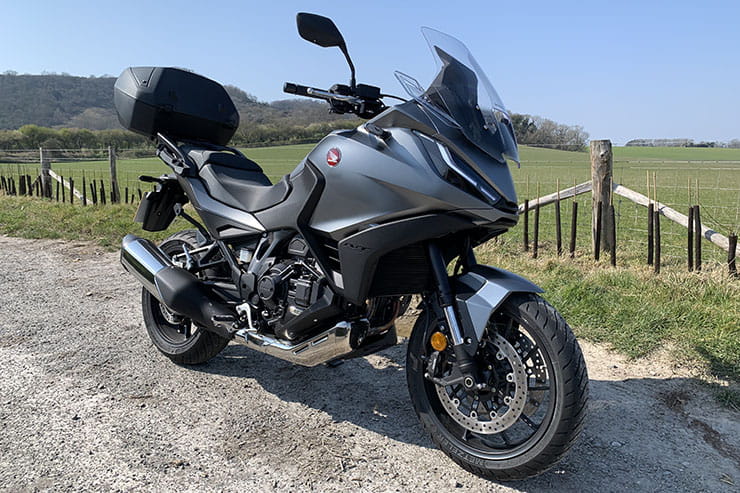 Fairing is more protective than the Africa Twin it’s based on. Wind deflectors around hands and feet are very effective

I don’t remember the first few miles on any bike being this enjoyable for a long time. There’s something familiar about Honda’s NT1100 that makes it feel like one of those ‘favourite things’ that blokes have. The riding position is natural, the way it steers and grips on a smooth twisty back road is sublime and the midrange power seems to stretch forever. It really doesn’t matter how many paper horsepowers the NT1100 has because the actual answer is more-than-enough. If you are one of those people who understood why Honda’s CBF600/1000 or ST1300 Pan European or VFR800, Deauville, Transalp or NC750 were such great bikes whatever the noisy stunters of the bike press said, then you are going to love the NT1100. I’d fallen for it in the first 50 miles. 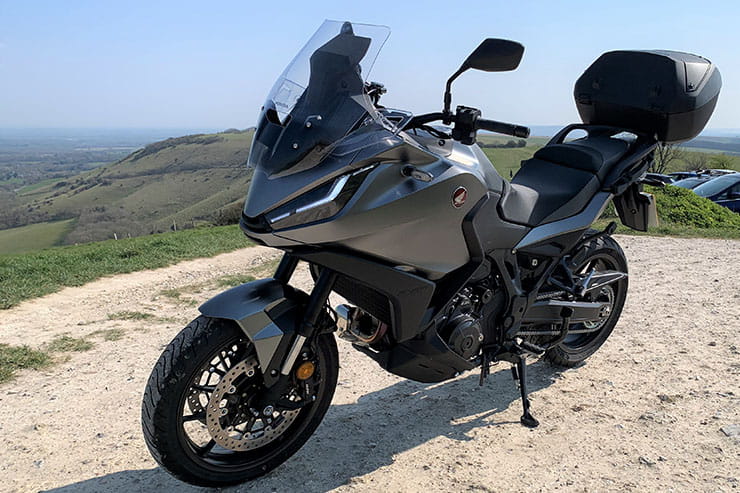 Styling is futuristic in a scooter-like manner. Headlights are good on dip-beam, less impressive on main beam and the orange driving lights reflect in the wind deflectors

It was the car world that invented the term SUV. They use it to describe a funky-looking off-roader that’s not quite as slow, overweight or prone to rolling over in corners as a farmer’s 4X4, but slightly more cool than a people carrier. SUV’s only claim to sportiness is typically a badge saying ‘sport’ on the boot (like that Hyundai Accent ‘Sport’ that your weird neighbour used to drive). Neither are they especially utilitarian being too big to park, too wide for towns and too thirsty to be anything other than a stylised, booster-seat for middle-class mummies.

Honda’s NT1100 on the other hand is the perfect definition of a Sports Utility Vehicle. It has the potential (if not the suspension) to be a very sporty motorcycle. The NT1100 is brilliant at the utility stuff being comfortable, economical and well equipped for racking up the daily miles. And, by modern standards it’s affordable too. For riders like me who spend much of their week (including weekends) on a bike, the NT is a no-brainer. And unlike some of the humdrum-but-lovely Hondas mentioned above, the NT has some personality and character too. I wanted one as soon as I saw it. I just wish Honda had painted it in more memorable colours.

Sports tourers used to be sports bikes with the handlebars six inches higher while the footrests were lowered. Engines were tamed for less top end power and fairings and screens were bigger. 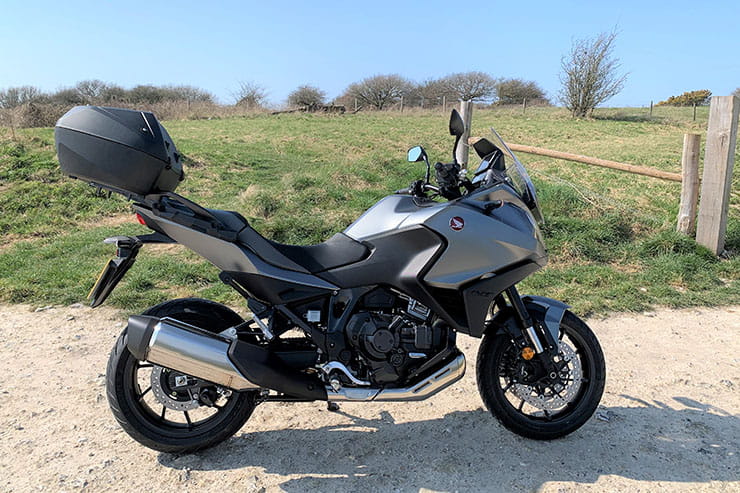 A sports tourer based on an adventure bike makes a lot of sense. Don’t be distracted by those complaining that it ‘only’ has 100bhp

The NT1100 re-writes this formula. It takes a touring bike (because we all know that adventure bikes are tourers for those of us not ready to admit we want a tourer) swaps the penny-farthing front wheel and chunky tyres for a pair of 17-inch road rims and grippy, long lasting radials. There’s less suspension travel (but a lot more movement – see later), a bit more bodywork, less sophisticated electronics, but panniers and centre stand as standard.

A sports tourer based on an adventure bike feels very different to one that started out as a race-replica. The NT feels spacious and welcoming, like an adventure bike with much more grip and stability. Plus, it steers and brakes like a road bike. It doesn’t feel too tall or unwieldy like some adventure bikes can, although it is still a substantial motorcycle. 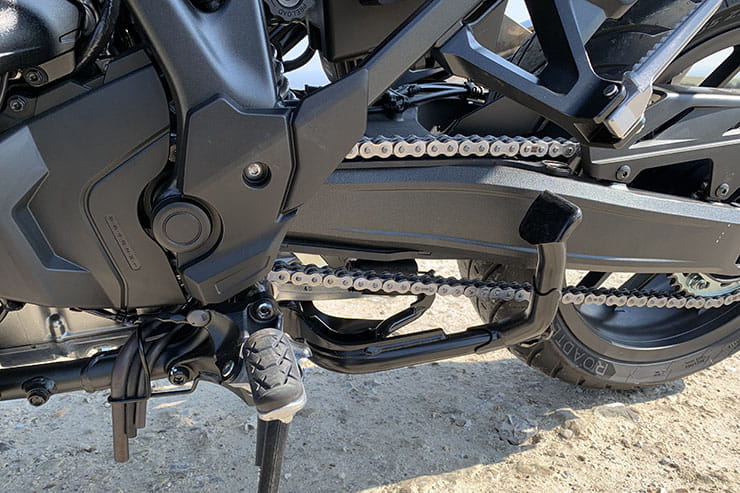 Centre stand will make chain management ten times easier than the Africa Twin. DCT transmission doesn’t need a gearlever even if the engine casing still has the ‘one-down, five-up markings.

BikeSocial’s long term test bike has Honda’s Dual-Clutch-Transmission (DCT) which is a semi-automatic gearbox that can be run in fully auto mode (there are four different settings) or used as a flappy-paddle manual gearbox with no clutch.

If you’ve never used DCT or haven’t used one for a while, the first hours are dominated by the experience. Select ‘D’ mode from the rhs switchgear and marvel (not in a good way) at how the bike is somehow in top gear by 31mph. When slowing down, it hangs onto top gear for too long before changing down. Filtering through traffic at 28mph in sixth gear on an 1100cc twin is best described as ‘characterful’, others might call it slappy or chuggy.

Junctions are easy though – the DCT automatically drops into first, there’s no clutch to hold in or need to find neutral – just twist and go. 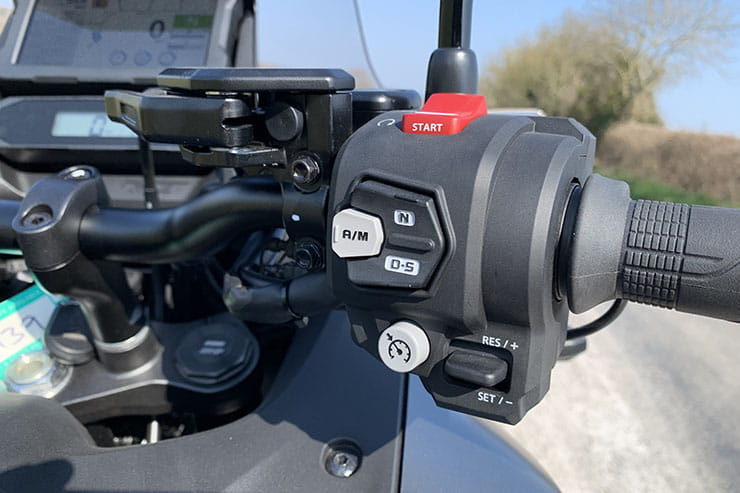 Select DCT mode here; D is Distracting but the three Sport modes are much better

Select one of the three ‘sport’ modes and the gearbox holds onto the gears for much longer before changing up and changes down differently too. You can over-ride the system at any time changing down or up manually or put it into full manual mode and enjoy having the slickest, quickest quickshifter you will ever experience (and it still changes down into first when you stop).

It takes an hour for DCT to stop being an overwhelming frustration that you can’t believe you paid extra for. Once that happens you just forget about it for most of the time. Select ‘Sport’ (I prefer the S2 mode) and go.

By day three you don’t even notice it unless you’re U-turning on gravel (feels clumsy) or filtering in traffic when not having a clutch lever makes you realise just how daft it is that we still have the same archaic transmission controls on our bikes that we’ve had since the 1920s.

Seriously, once you get over that first hour or two, mix it up between manual mode on the twisty bits and ‘Sport’ mode everywhere else, you’ll understand that DCT is a genuine step forward. Your passenger will love it too because it removes the helmet-bashing clunk that spoils the fun of two-up riding. Try not to judge it on those first few hours though. If you really aren’t convinced by all the above, buy the manual NT1100 and save £1000.

And the good news is that the first few hours on an NT1100 are very pleasant. The riding position is a lovely mix of comfort and ease-of-control. You sit tall but protected by the fairing. And the NT’s screen is a lot more useful than the too-tall item on the Africa Twin. Screen adjustment is stiff and not practically possible on the move. In the lowest position there’s no buffeting and not too much noise. In the highest position it’s much calmer and quieter but six-footers can still easily see over the top of it. 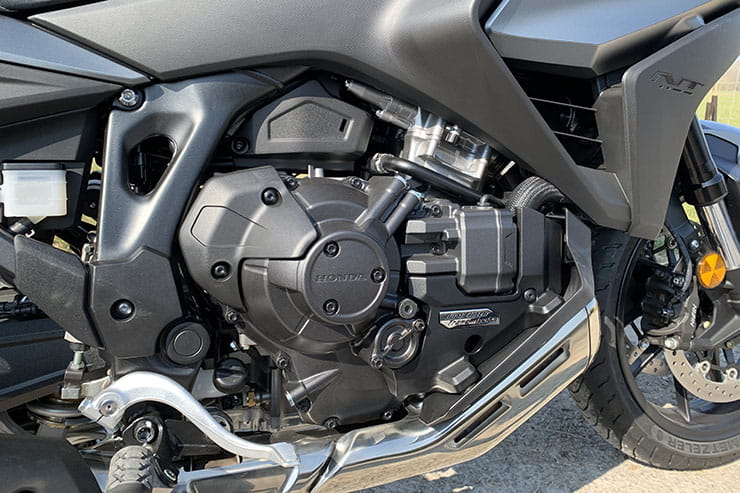 Honda learned a long time ago that 100bhp delivered properly can be exciting (and economical).

First impressions (aside from the DCT) are of an engine with just the right amount of power and torque in exactly the part of the rev range where you’d like it to be. There’s plenty of midrange for overtaking, enough top-end to run out of bravery before you run out of speed and an easily-obtained 55mpg riding like a fool is the perfect antidote for those ‘experts’ who reckon 100bhp isn’t enough power for a two-up sports-tourer. They are wrong because anyone over the age of 25 understands that it’s not just power that makes a bike go (and feel) fast, but a combination of power, torque, gear ratios and fuelling. Thankfully Honda’s engineers know a lot more about making bikes go fast than your mate down the pub and it appears they put their best team on the job for the NT1100.

Sadly, Honda’s crack suspension team must have been paintballing at the time and Honda might have replaced them with the less-crack engineers that set-up the blancmange-like CB1000R. The NT’s standard settings are very soft, which would be ok if they weren’t also chronically underdamped. So although the NT has less suspension travel than it’s ad-ven-chewer AT cousin, it seems to use all the available movement pretty much all of the time on a bumpy, twisty back road where braking and acceleration are dominant. 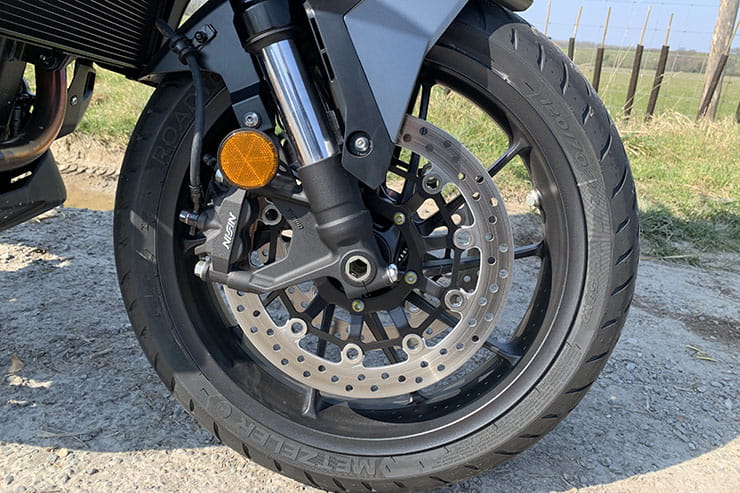 The ride quality on bumpy urban roads and motorways is excellent and preload adjustment when adding a pillion is easily done. It’s the ‘sports’ bit of sports-touring where the NT comes unstuck. Chasing a mate on a favourite bumpy backroad had the NT’s wheels off the ground as we hit bumps that are bad, but not that bad. In one case the whole bike skipped a couple of inches to the left while on half-lean through a corner. If you’ve ever ridden a first-generation BMW ESA electronic suspension system on the softest setting you’ll be familiar with the feeling.

The only adjustment is preload front and rear. Increasing the preload takes some of the sagginess out of it, but riding a standard Africa Twin (which has fully adjustable front suspension and preload plus rebound adjustment on the rear) to compare made me thankful that almost all the options and accessories I need are standard on the NT because I can spend the money saved on getting a specialist to sort the damping on the rear shock.

Honda’s engineers have gambled that most buyers won’t ride their NT1100s like an ageing road tester with an invincibility complex. At eight-tenths, the NT’s suspension is fine on the backroads.

Other than that (which I’m sure can be tweaked) I love everything about the NT. Next up are some long days in the saddle and a ‘can I get 300 miles to a tankful?’ challenge. 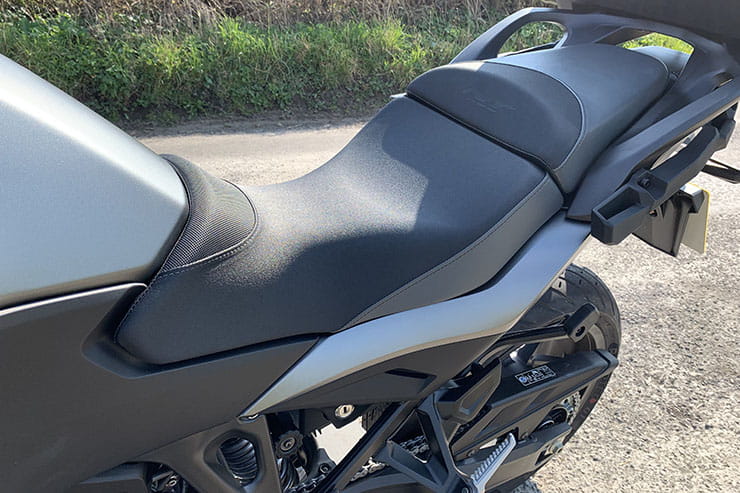 Standard saddle is comfy for 150 miles before the shuffling starts. There’s an optional comfort seat (which begs the question, why not just fit that as standard?)